Science-Loving Teens From Ghana And D.C. Geek Out Together

Science-Loving Teens From Ghana And D.C. Geek Out Together 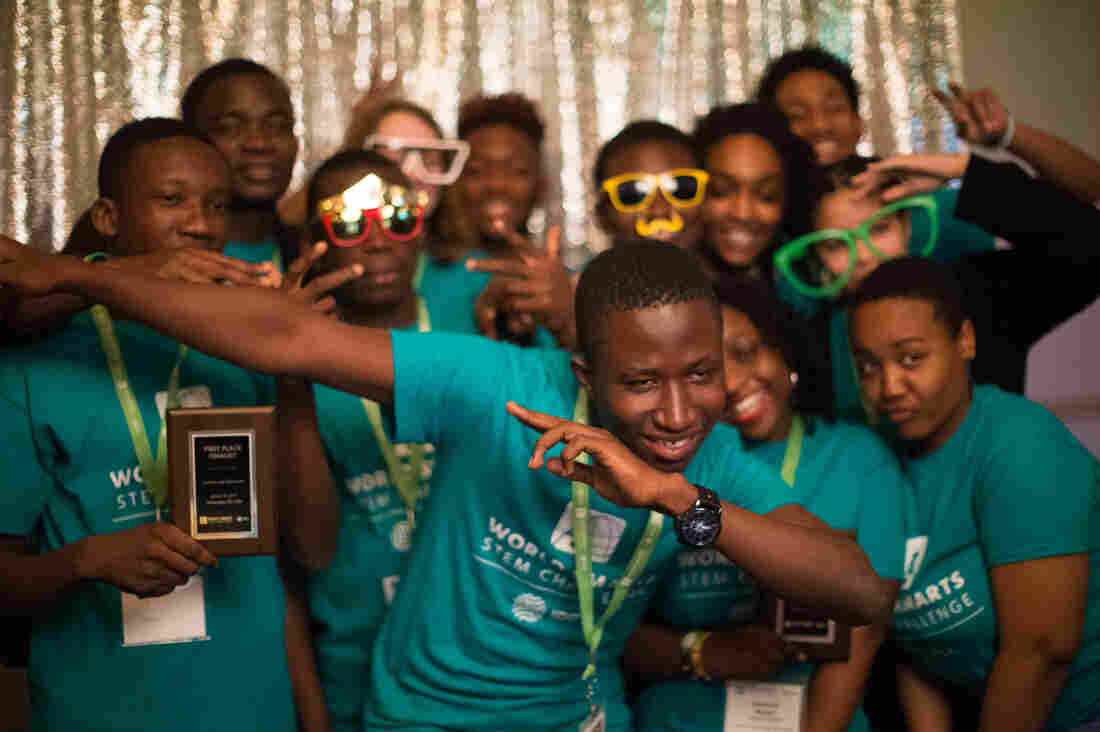 It was a meeting of nerds and sharks.

The self-described "biotech nerds" and "robotic nerds" were seven high school students from Washington, D.C. The eight teens who call themselves "sharks" and flew in from Ghana. "The shark is a big fish so it means you're big. Knowledgeable," explains Stephanie Obbo of Ghana, an aspiring medical doctor.

Together, the 15 high schoolers formed a team for the first World Smarts STEM Challenge. That's a science competition run by IREX, a global development nonprofit that strives to promote student enthusiasm for science, tech, engineering and math (aka STEM). Each of the 17 teams had teenagers in the D.C. area partnering with Ghanaians to identify and solve a real-world problem. NPR's Goats and Soda followed "Team McKwiny" — a name that blends D.C.'s McKinley Technology High School and Winneba Senior High School in Ghana.

They had collaborated since September over the internet. The Americans kicked around the idea of minimizing carbon emissions. The Ghanaians wanted to tackle water pollution. They finally agreed to design and build a water purifier.

Both contingents had a personal stake in the project. The McKinley students found high levels of lead in the Anacostia River that flows through Washington, D.C. And the Winneba students in southern Ghana found pesticides, hospital waste, sewage and other pollutants in a nearby lagoon used for fishing and irrigation. And because water shortages cause locals to rely on streams and ponds for clean drinking water, more than 100 cases of cholera swept through a neighboring district just in October 2016. 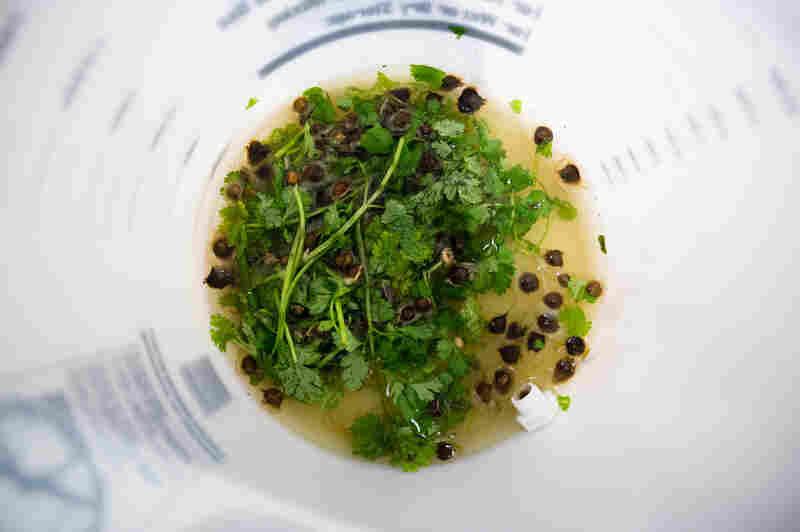 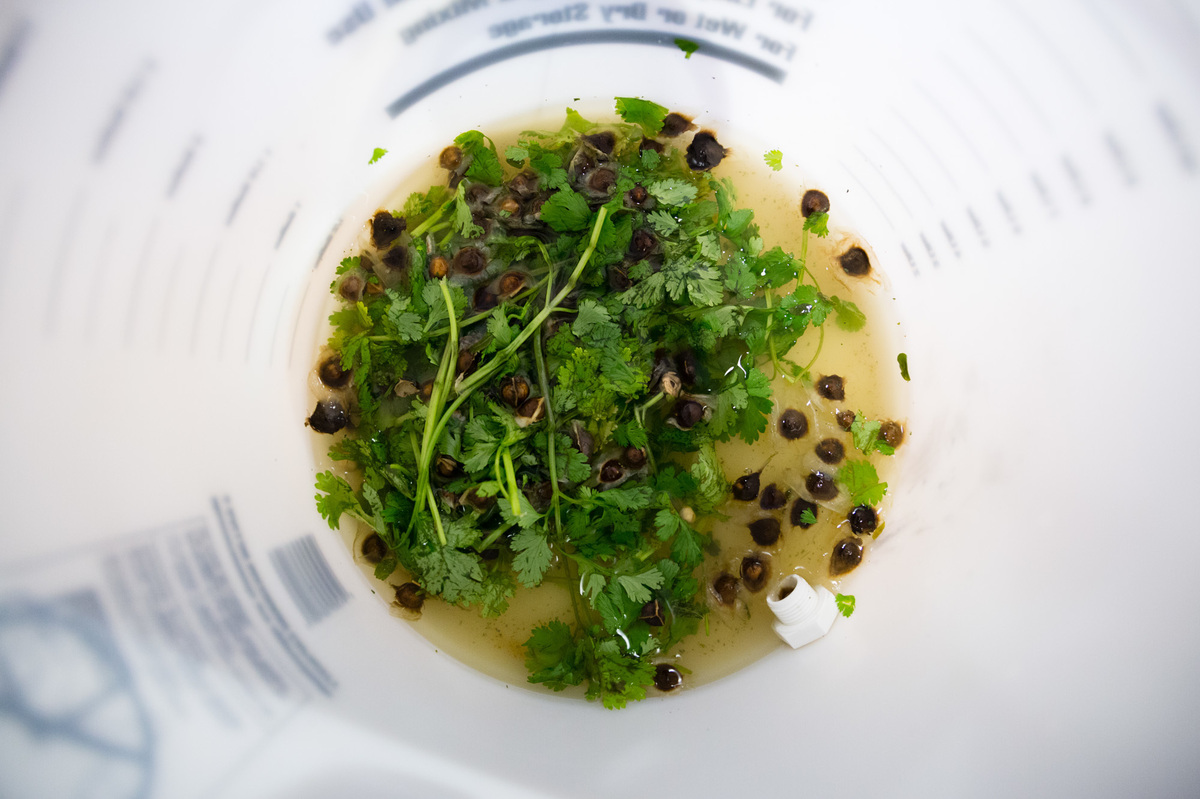 Cilantro played a role in one stage of the team's water purification system.

The Ghanaian teenagers proposed using local materials, like leaves from neem trees, to help filter the water. (The medicinal and antibacterial properties of neem leaves and oil have been studied.) The Americans, with no access to neem leaves, suggested substituting cilantro after learning that it removes lead from water — a property discovered by undergraduate researchers in 2013.

Meeting in person for the first time was a little awkward, since being social mattered at least as much as being scientific. American Miara Bonner, wearing a lab coat and hoop earrings, suggested an icebreaker. "What's that?" asked the Ghanaians in unison.

A question-and-answer game revealed similarities and differences. "I also don't like the food at my school," said Cassell Robinson of McKinley. "We have many tribes and festivals to remember the past and sacrifice animals," said Winneba junior Stephanie Obbo. Bonner's jaw dropped. "I did not know any of that." She remembers thinking, "They hunt. They sacrifice. They don't teach you that in history!" 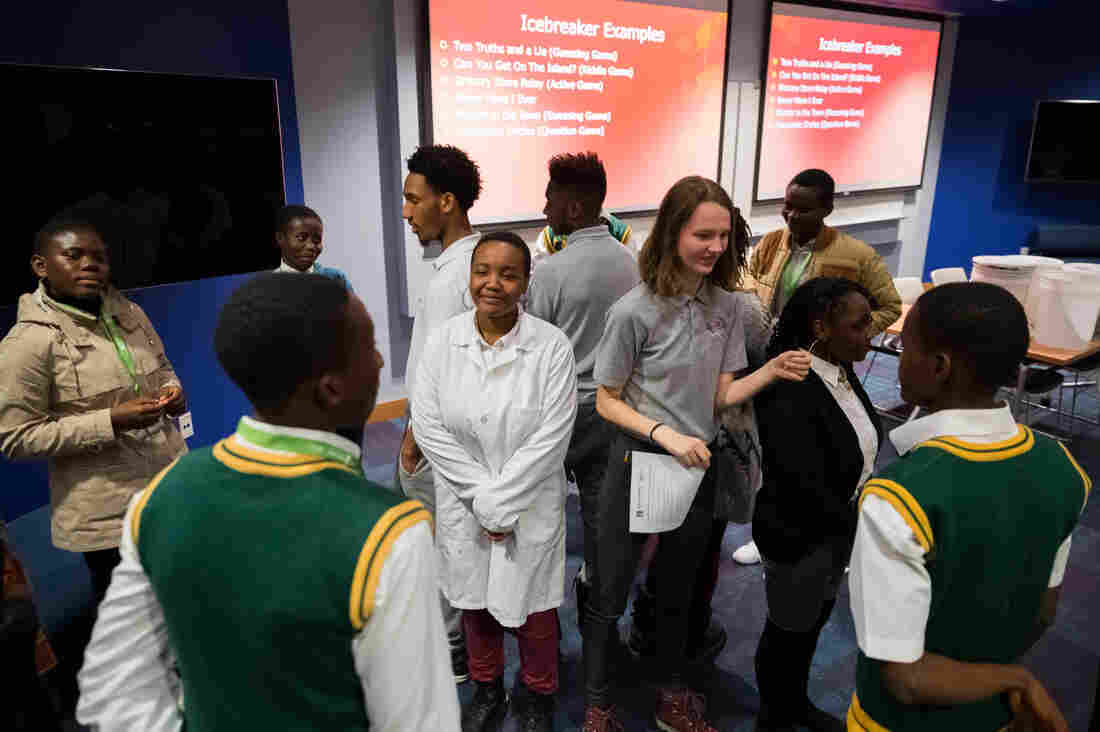 It's icebreaker time for Team McKwiny, who found out they have a lot in common. Ryan Eskalis/NPR hide caption 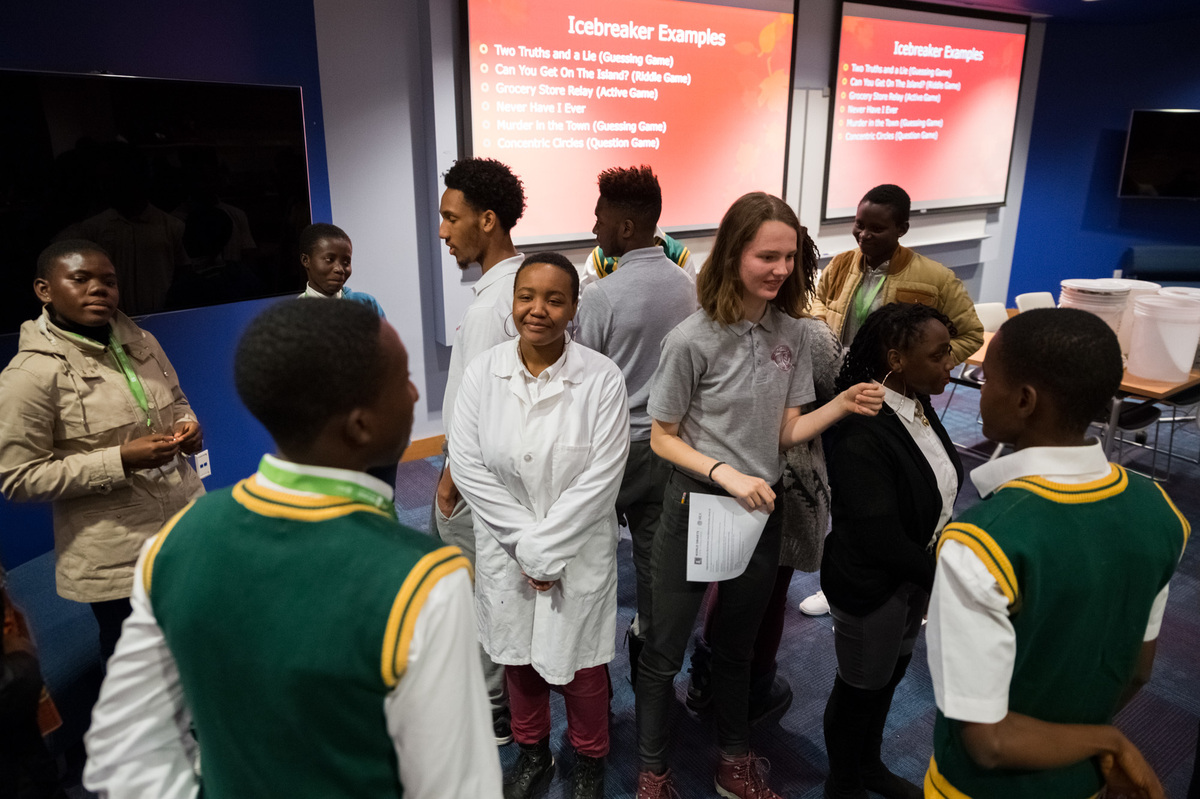 It's icebreaker time for Team McKwiny, who found out they have a lot in common.

Their purification device consisted of four interconnected plastic buckets. In the first chamber, the water is filtered through gravel and sand. Then moringa seeds and neem leaves (or cilantro) in the sedimentation chamber extract particles before the water is boiled in a different chamber and then stored. Team McKwiny tested their treated water samples and said they were able to remove contaminants from both fresh and salt water, meeting World Health Organization standards for safety.

"It opens up my eyes that there are a lot of things that are useful out in the world that I just haven't found yet," said McKinley's Megan Richardson.

The goal of the competition is to encourage that kind of curiosity. Especially because few American students are embracing STEM. "Only about 16 percent of American high school seniors are proficient in math and interested in a STEM career," said Rebecca Bell Meszaros, associate vice president for education with IREX. "This program is combining STEM and 21st century skills like problem solving, innovation and cross-cultural communication." She adds that IREX chose to focus the program, made possible by a grant from the Carnegie Corporation of New York, in Ghana because the nonprofit has good access to schools with reliable internet.

By Saturday's final event, American and Ghanaian members of Team McKwiny were whispering into each other's ears and holding hands. But they didn't get the grand prize. That went to Team "Big Bang ... Brains of the World!" The students had filled ice trays with soil, added copper wire that was coiled around zinc-plated nails and then poured lemon juice on top. Their battery produced enough voltage to light an LED. The team now has a chance to pitch their battery to investors; IREX will match up to $10,000 raised. 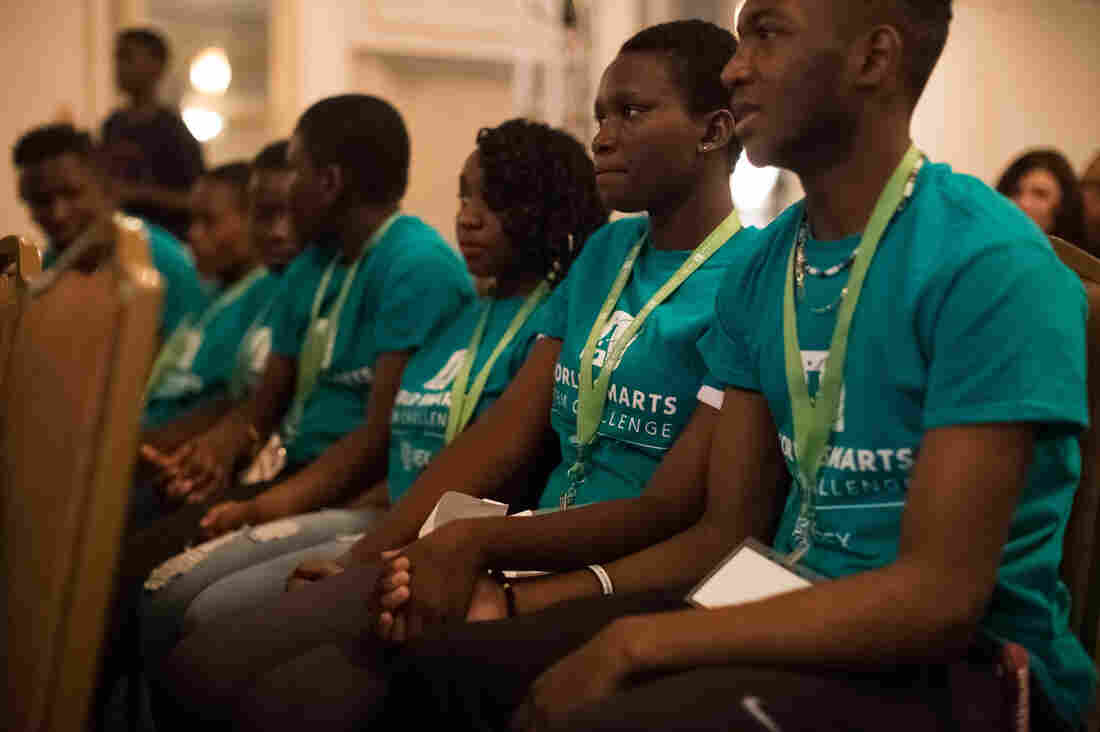 Members of Team McKwiny clasp hands in anticipation of the awards announcement. They came in second. Ryan Eskalis/NPR hide caption 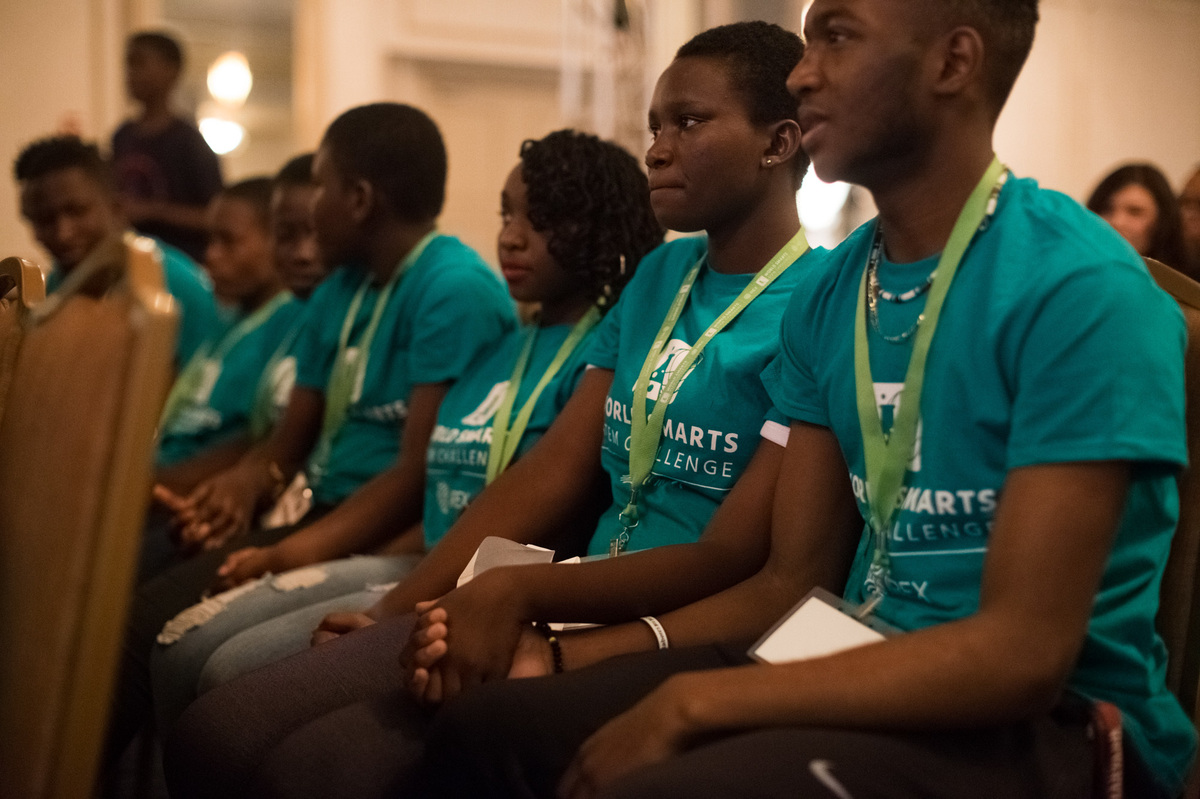 Members of Team McKwiny clasp hands in anticipation of the awards announcement. They came in second.

"The winning soil battery demystifies energy production and storage at a time when battery storage is evolving faster than ever," said judge Jim Egenrieder, director of Virginia Tech's National Capital Region Thinkabit Labs. "And the water filtration system prototype represents what may become part of every household in the future, as we learn to use and reuse precious water resources."

Team McKwiny came in second and plans to keep going. The Ghanaian students hope to apply for funding from nongovernmental organizations to construct their filter on the outskirts of the Winneba Township. They want to put the first filter near a school where students lack access to clean water and sometimes have no option but to use water shared by livestock.

In the end, the students didn't just learn about science. The Americans got new insights into life in the developing world. "I didn't know that there are lagoons that people get their drinking water from — the water that they bathe in and wash their clothes in," said Miara Bonner, who hopes to one day become an endodontic surgeon. "I don't like the idea of that. When I heard that, I thought this is the problem we need to focus on."

And the Ghanaians tossed out their stereotypes of Americans. Belinda Dogbe had the preconception that Americans would be "snobbish, always wanting to be alone, not friendly" — a stereotype that came from Hollywood movies. "I realized we are wrong," she said. "They are very friendly, they are open. They love to ask questions."

Sasha Ingber is a multimedia journalist who covers science, culture and foreign affairs for such publications as National Geographic and Smithsonian. She can be reached @SashaIngber