Accessibility links
Why Do Aid Groups Drop Food From Planes When It's A Difficult And Dangerous Method? : Goats and Soda It's difficult. It's potentially dangerous. It's costly. And it's going on in South Sudan right now.

Nobody Wants To Drop Food From A Plane. But It's Happening

Nobody Wants To Drop Food From A Plane. But It's Happening 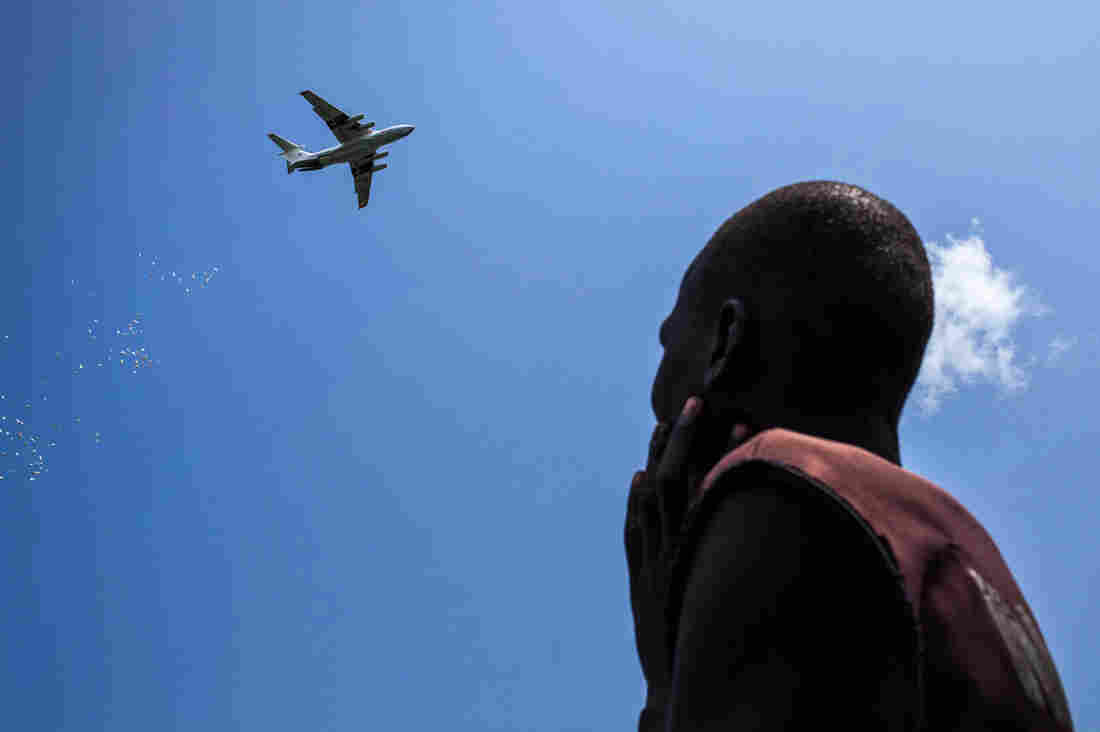 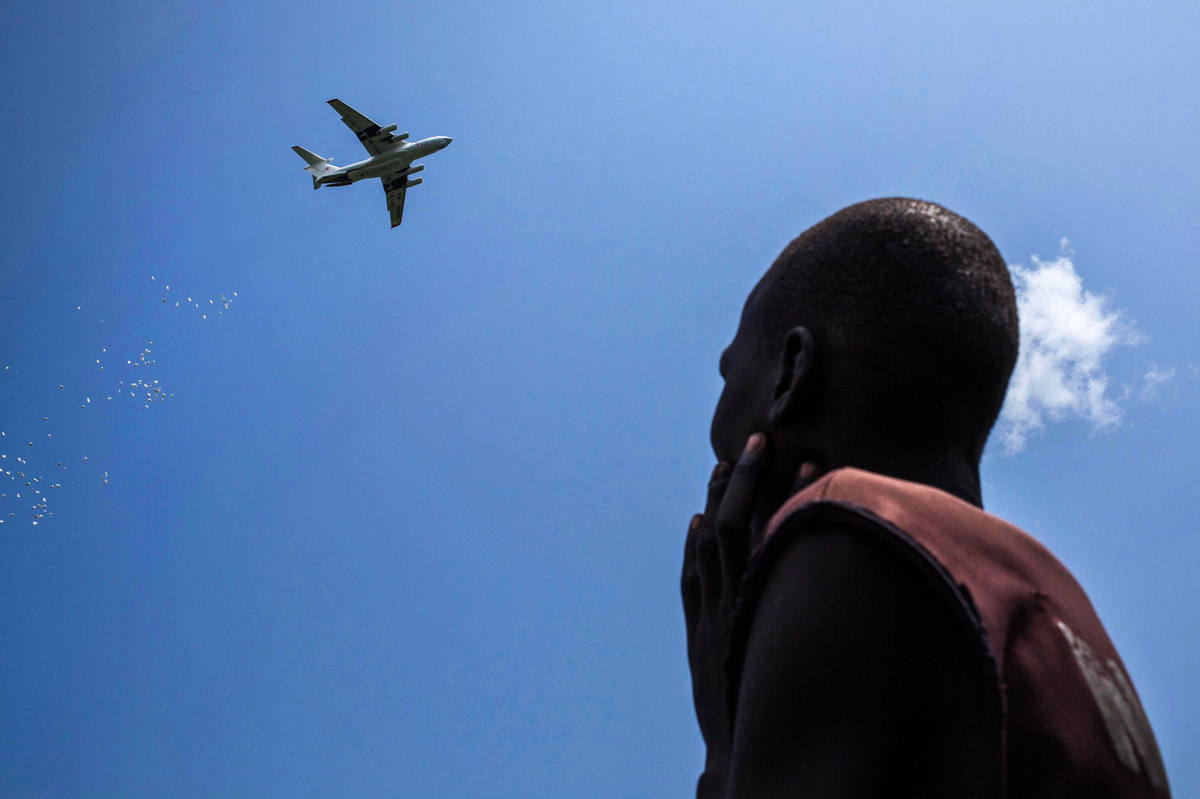 A plane flies over a field in South Sudan. Out of the sky drops a cascade of pallets, sacks or boxes filled with emergency food supplies that, once they reach the ground, can make the difference between sustenance and starvation.

It can make for quite a show: Unlike ordinary truck or barge deliveries, an airdrop is full of drama. Specially trained pilots must carefully calibrate the altitude that will allow the containers, each with its own parachute to cushion the landing, to hit the ground intact and undamaged — and also not accidentally land on and injure those waiting in the field below to begin the job of sorting and delivering the foodstuffs to the communities in need. The news magazine 60 Minutes featured airdrops in South Sudan in a story last Sunday.

But the purpose of such airdrops is not at all for show. "We don't want to do [airdrops]. We only do them when there is no other way," says Steve Taravella, senior spokesperson for the U.N. World Food Programme, which provides the deliveries. They represent the "last resort" for transporting essential rations to some of the most inaccessible areas of this food-starved, war-torn country, riddled with ongoing conflict and additionally difficult to traverse because of its mostly unpaved roadways and not always safe waterways.

And it's not an economical way of getting food to the hungry. "The cost of air dropping food is massively expensive," says Brian Duss, a spokesman for World Vision. The cost is about $1,000 per ton of food, according to a spokesperson for Mercy Corps, which says that transporting food by truck can cost up to 80 percent less.

Famine has been declared in two counties in South Sudan, and millions more in other regions are suffering from food shortages. Given such untenable conditions, the extra expense incurred through airdrops "is not even a question," says Taravella, "because there is no other way" to get food to those in need.

The drops have succeeded, says Taravella. Since the airdrops to South Sudan began in March 2014, WFP has done "thousands" of flights, he says, with each flight delivering approximately 30 tons of rations, which include cereals (sorghum and, sometimes, the maize), pulses (such as yellow split peas or lentils), vegetable oil and nutritionally fortified foods like Super Cereal and Super Cereal Plus.

"The latter two are specialized blended foods, sort of like fortified porridge mixes designed to treat and prevent malnutrition. Super Cereal Plus is specifically designed for young children," explains Taravella.

Deepmala Mahla, the South Sudan country director for Mercy Corps, agrees that the current dire situation demands emergency airdrops. Mercy Corps has worked with WFP to coordinate distribution of soap supplies at the same time as the food provisions, in order to avoid people already weakened from hunger having to make separate trips.

"Food insecurity is unprecedented," with 47 percent of the population (about 5.5 million) facing the prospect of hunger and worse, Mahla says. Over the course of the war, crops were not grown or were destroyed or have been looted.

"When a population is on the brink they cannot wait," she says. "I myself have seen people who have survived only on water lilies because that is all that is available" in some of the swampy areas that people have been driven to for self-protection by the fighting.

"There is so much need," says Noah Gottschalk, senior humanitarian policy adviser for Oxfam in Washington, D.C. But there is also ingenuity and resilience, he notes. After an airdrop people often find innovative ways to make practical use of every part of the shipment, and not just the food stuffs: for instance, turning a wood palette into a door, banging a large metal can into a window frame or re-using the sacks to carry charcoal or even to help string together a hammock-like bed.

Still, the airdrops present only an immediate rather than a long-term answer, Mahla says. "There is a risk that we might [fall] perpetually into a cycle of more and more relief." It's necessary to "layer" the food distributions with other programs that, for instance, "provide the people with the seeds, the tools, the fishing nets to produce their own food." Where possible Mercy Corps and other organizations are trying to keep such programs going.

"Our goals are not only to save their lives today but to reverse the situation and make people more food secure," says Mahla. Oxfam is similarly working to support local markets and to provide seeds and tools for people to grow food.

But to reduce the need for emergency aid requires a reduction in conflict. To see so much hunger and famine in the South Sudan is especially ironic, Mahla says, because the land itself is fertile. The Nile provides abundant water, and then there are the bees. "Honey from the South Sudan could be in a supermarket in the United States!" she says. "All we need is peace."