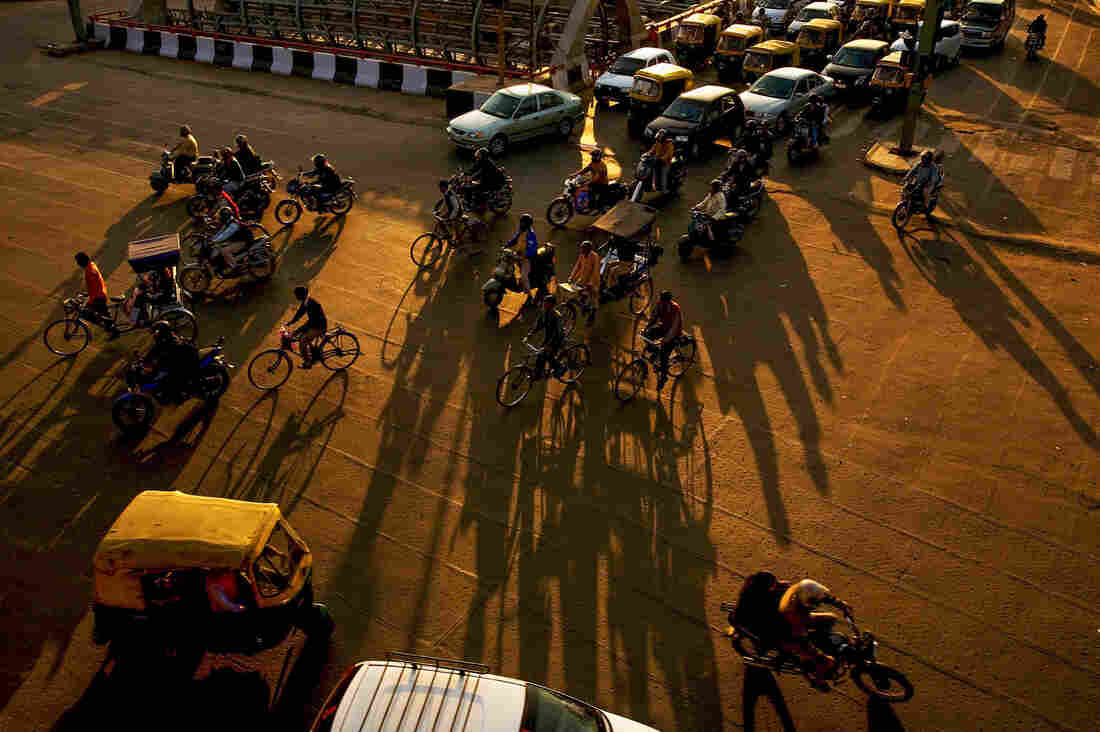 Traffic is a major source of noise pollution in Delhi (above) and other Indian cities. Daniel Berehulak/Getty Images hide caption 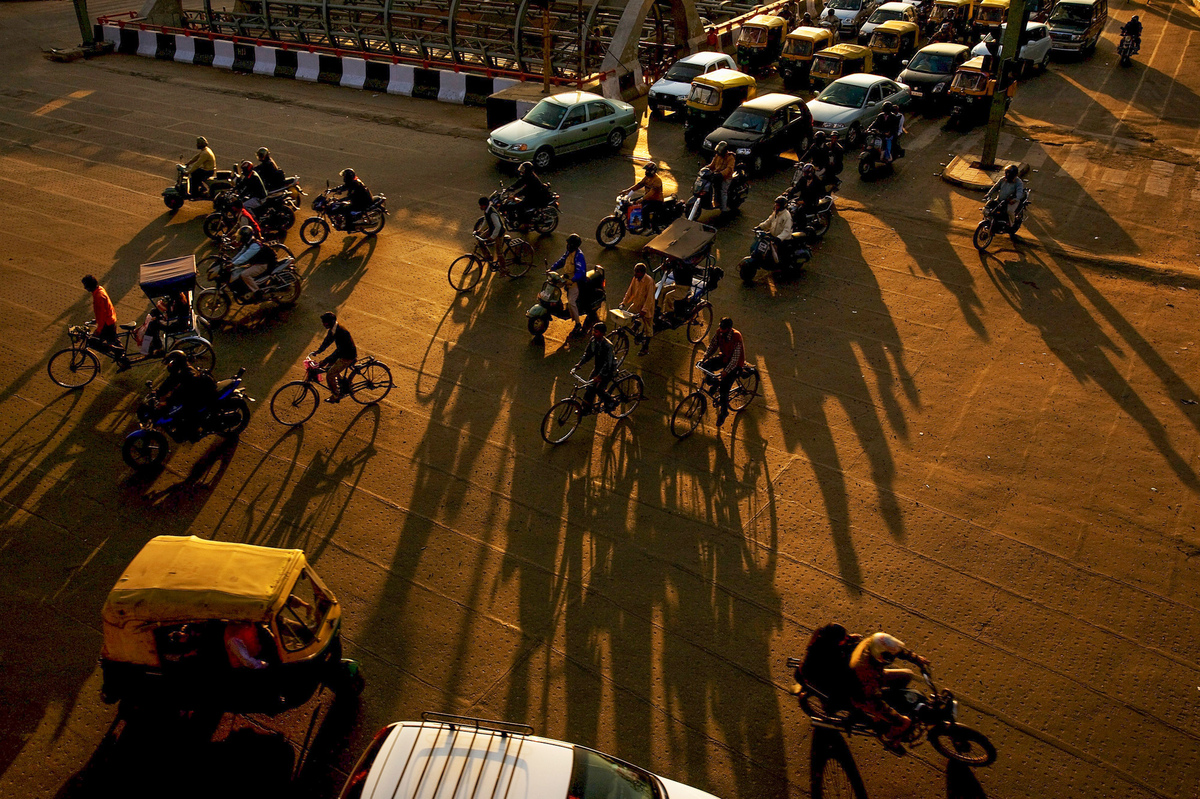 Traffic is a major source of noise pollution in Delhi (above) and other Indian cities.

America has some noisy neighborhoods — and Los Angeles is number one. That's what you can learn from a new noise map from the U.S. Bureau of Transportation Statistics.

I sympathize with the beleaguered ears of Los Angelenos — up to a point. That's because I live in India.

Our cities are so noisy that just last month, the Central Pollution Control Board banned "sharp, shrill and alarming" car horns and urged drivers to curb their honking: no needless honks, no nonstop honks, no honking more than necessary.

But honking is just part of the problem both in Mumbai, where I live, and in Delhi, where my parents reside. When I visit my parents there, everything seems to sound louder and larger than life. I often walk to the market in their genteel, upper-middle class, residential neighborhood, and in that half mile, there's no telling what I could encounter: traffic jams and honking in all registers, of course, but also brass bands in wedding processions, PA systems blasting prayer services in religious rallies, planes winging by overhead and, of course, stray dogs yowling and barking.

All that noise can't be good for you.

Study after study has established that people living near traffic, industrial noise or in flight paths have elevated anxiety levels and stress hormones.

The impact of street noise on hearing is less definitive. "Unless you spent very long periods of time outside I wouldn't expect urban noise to be hazardous to hearing on its own, although it may add to the hazard if you work in a noisy place or go to a lot of clubs and concerts," says Colleen Le Prell, a professor of audiology at the University of Texas at Dallas who specializes in hearing loss.

Are you in India if you don't hear honking every minute?

But just being outside in Delhi seems like an aural hazard. I was curious to see how loud it can get there, so I used my phone's decibel meter app to measure sound levels both indoors and out. (Keep in mind that decibels follow an interval scale, so 80db is not twice as loud as 40db. It's actually twice as loud as 70db.)

From inside my parents' house, which is on a quiet block flanked with bungalows, the average levels were at 65db thanks to humming generators (for electricity backup for the frequent power cuts). That's noisier than the hum of an air conditioner but not as high as a vacuum cleaner, which hits the high 70s. And it's higher than the World Health Organization's recommendation: "30 decibels in bedrooms during the night for a sleep of good quality."

The decibel count flew to about 70db when airplanes roared overhead, or on a festival day, when music blasted from revelries several blocks away.

On the streets, traffic is the worst, most consistent offender when it comes to noise pollution. A recent journal article that looks at India's noise pollution policy puts road traffic sound above industrial noise and construction, even.

According to data from India's Central Pollution Control Board (CPBC) and independent reports, traffic sound averages 100db from the street, which is approximately like the sound of a leaf blower from about three feet away– or a rock concert, but a lot less melodious. In Vienna, Austria, the city ranked lowest on the Index, traffic whispers along at 55db. A 2011 report from the Centre for Science and Environment in Delhi puts busy arteries and bus stops at 100-108db with some areas going up to 125db. That's higher than rock concert levels. The Centers for Disease Control sets 15 minutes as "permissible exposure time" for 100 db before possible damage can occur.

Standing at a crossroads 100 feet from my parents' gate, my decibel meter app averaged at 75db, peaking at 86db when an auto rickshaw or motorcycle went by honking.

According to data from the Awaaz Foundation, an anti-noise pollution group, construction is the next biggest ear basher. Not only is there residential construction ever present, seemingly the entire city of Delhi is being dug up as the Metro expands. (Awaaz is Hindi for sound or voice.)

As per the Ministry of the Forest and Environment, construction equipment like concrete mixers, movable cranes, vibrators and saws should not exceed the noise limits of 75db in industrial areas and 65db in other areas.

But according to data collected by Awaaz, concrete breakers or demolition drills in India generally emit 120db, drills 100db, and cement mixers 85db.

According to Awaaz's data, the next biggest culprits in Delhi are aircrafts that have flight paths over the city. Both Delhi and Mumbai have airports within city limits and numerous flights over residential areas. A Boeing 737 at the height of one nautical mile (6,080 feet) clocks in at 90db — about the same as a powerful hair dryer or garbage disposal.

Finally we have fun.

Fun is hard on your ears. Festivals, weddings and religious processions are public phenomena in India. In traditional North Indian weddings, the bridegroom reaches the bride's home on a white mare accompanied by a brass band and dancing relatives.

And all festivals mean public celebrations with either a DJ or live music as well as firecrackers for the entire neighborhood to, erm, enjoy. That is, if you can hear the music over the honking and construction noise.