Accessibility links
The Story Behind The Deadly Ambush Of 6 Aid Workers In South Sudan : Goats and Soda The killing of six aid workers in South Sudan was the deadliest attack since the country's civil war began in 2013.

On Their Way To Build A Youth Center, They Were Ambushed And Killed

On Their Way To Build A Youth Center, They Were Ambushed And Killed 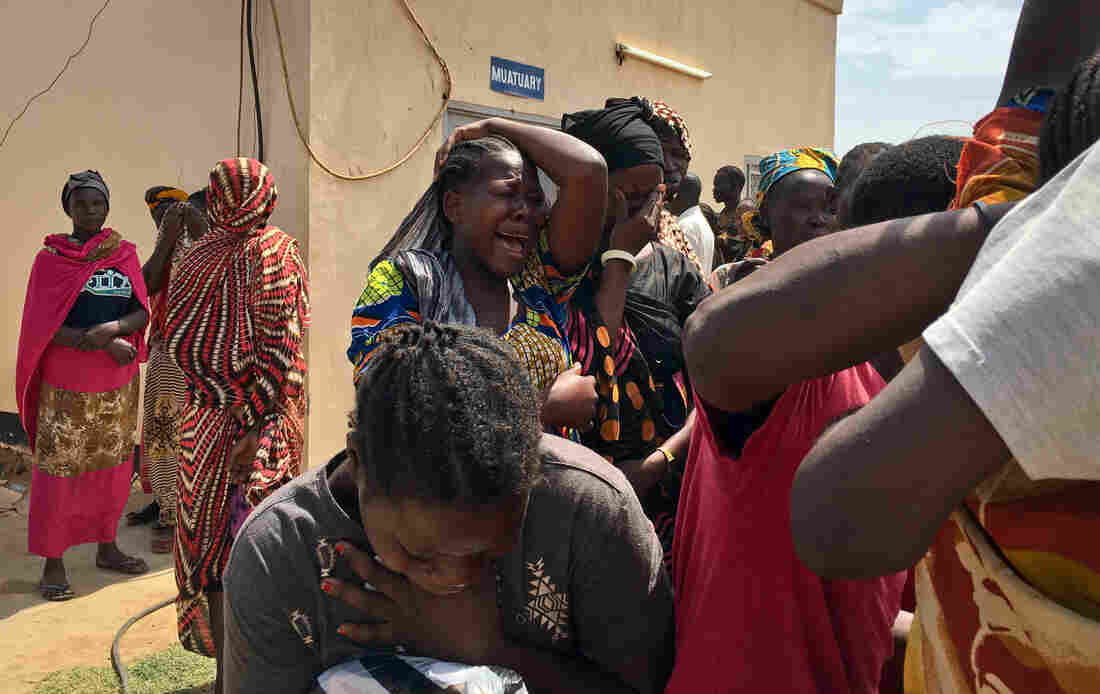 Relatives of the ambushed aid workers wait to collect the bodies of their loved ones. The photo was taken outside the morgue in Juba, South Sudan, on March 27. AP hide caption 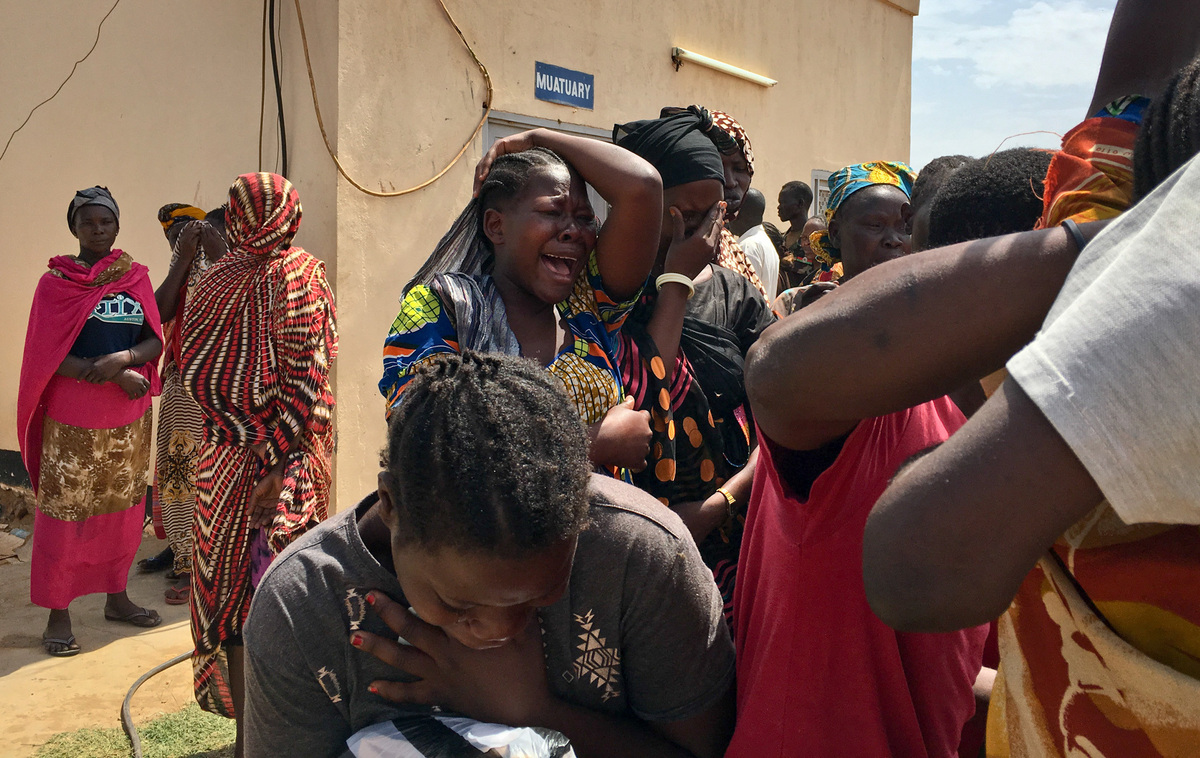 Relatives of the ambushed aid workers wait to collect the bodies of their loved ones. The photo was taken outside the morgue in Juba, South Sudan, on March 27.

On Saturday morning a team of six aid workers from the Grassroots Education and Development Organisation in South Sudan decided to get an early start on their day.

A grueling 185 mile drive over deeply-rutted roads lay ahead of them. In their Toyota Land Cruiser, the crew were supposed to be part of a convoy of trucks heading from Mongalla just north of the capital to the town of Pibor, in the east of the country near the Ethiopian border. The dirt road skirts Bandingilo National Park and cuts through territory contested by armed militias from both sides of South Sudan's brutal civil war.

Before they pulled out of Mongalla, they took on an extra passenger, also headed to Pibor.

"They did not leave together with the rest of the trucks. They left earlier. Very early," says Jaffar Mbugua, the program director for GREDO, a small aid group with a staff of just 30, based in Juba. It's a UNICEF partner that works with children released from armed groups. "And then on the way they were attacked."

In the deadliest attack on humanitarian workers in South Sudan since the war broke out in 2013, all six staff members from GREDO, along with their hitchhiker, were killed. In an instant the organization lost a fifth of its staff.

It is still unclear who carried out the lethal ambush. The government says rebel soldiers staged the attack. The rebels say government troops were the attackers.

Why The Famine In South Sudan Keeps Getting Worse

The GREDO team was all men ranging in age from their mid-20s to mid-40s. Three were South Sudanese. Three were Kenyans. They were on their way to Pibor to build a youth center.

Mbugua says the men were working to make South Sudan a better country. He says they all knew that the drive and their work in a constantly shifting conflict zone were dangerous.

"They were taking a risk to work here," says Mbugua. "It was for the sake of humanity that they were trying to make a difference in the life of other people."

Elisa Yani, Joseph Wanjau and David Wanaina were going to construct the new youth center. Samson Mbuga from Kenya and John Riti from South Sudan were both English teachers. They were going to give language classes and vocational training in leather work and carpentry. Kil Chop was a driver for GREDO and would have been behind the wheel of the Land Cruiser when they were attacked.

Back in Juba, Chop's wife had given birth to a baby just before the New Year.

In early December Samson Mbuga, the teacher from Kenya, had lost his wife. His children are now orphans.

"These were all people who had their own challenges," Jaffar Mbugua says. "They were working here hoping to make things better, hoping that things would be different."

"At a time when humanitarian needs have reached unprecedented levels, it is entirely unacceptable that those who are trying to help are being attacked and killed," Owusu said.

Other U.N. officials have suggested the slaughter could be a war crime under international law. The U.N. says at least 79 aid workers have been killed in South Sudan since the conflict began in December 2013. Twelve of those deaths have occurred in the last three months. In addition, convoys of food supplies have been looted. Humanitarian warehouses have been torched. Earlier this month local employees of Samaritan's Purse, an American Christian charity that's been distributing food, were held captive by gunmen for four days in the town of Mayendit.

"For many, many years Afghanistan has been the country with the highest number of attacks on aid workers but in 2015, South Sudan overtook Afghanistan," says Adele Harmer of Humanitarian Outcomes. Her organization analyzes security risks for aid organizations.

"I think what makes South Sudan different from other extremely violent contexts for aid workers like Syria, southern Somalia, Afghanistan is the ethnic nature of the conflict," Harmer says.

The civil war in South Sudan began in 2013 when vice president Riek Machar, who's ethnically Nuer, took up arms against the president, Salva Kiir, who's from the Dinka tribe. The war has been so ethnically driven that some human rights groups have warned that South Sudan could be on the brink of a genocide. Even refugee camps have become segregated along ethnic lines.

The ethnic nature of this conflict has led some people, including some combatants, to question whether aid groups are secretly favoring one tribe over another.

Another problem for local aid groups, Harmer says, is that they may not have the resources to keep their employees safe.

"The U.N. and big international NGOs operating in South Sudan are doing so with air assets," Harmer says. "They're using fixed wing [planes] and helicopters to move food, staff and other materials in to some of the most vulnerable states."

She says around the globe the most dangerous moment for aid workers in conflict zones is "when they're traveling on the road in between locations that are not areas where they work."

Which is exactly the situation the staff from GREDO found themselves in ... out on an empty road, alone in their Toyota Land Cruiser.