Accessibility links
Medical Mystery: Why Did The Number Of New Microcephaly Cases In Brazil Drop In 2016? : Goats and Soda Scientists predicted that more than 1,000 babies would be born with the birth defect in Brazil last year. That never happened. Why?

Why Didn't Zika Cause A Surge In Microcephaly In 2016?

Why Didn't Zika Cause A Surge In Microcephaly In 2016? 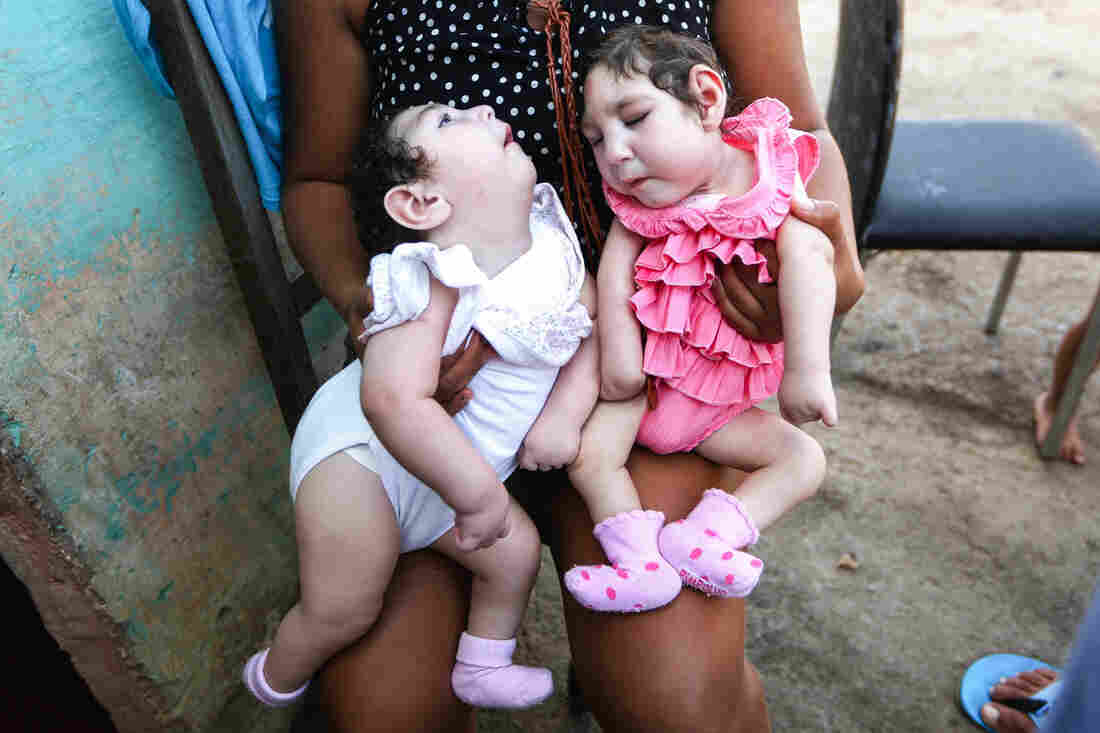 A family member holds twins Eloisa (left) and Eloa, both 8 months old and born with microcephaly, during a Christmas gathering. The mother of the twins, Raquel, who lives in Brazil, said she contracted Zika during her pregnancy. Mario Tama/Getty Images hide caption 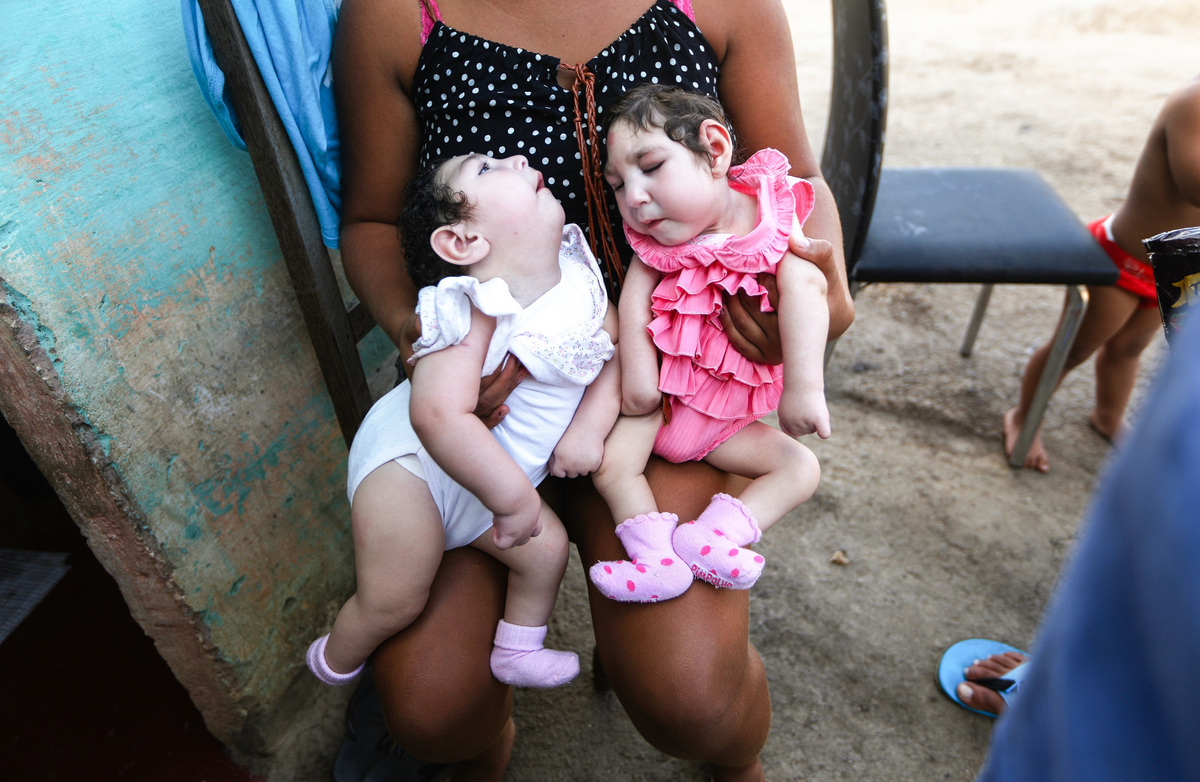 A family member holds twins Eloisa (left) and Eloa, both 8 months old and born with microcephaly, during a Christmas gathering. The mother of the twins, Raquel, who lives in Brazil, said she contracted Zika during her pregnancy.

Back in 2015, Brazil reported a horrific a surge in birth defects. Thousands of babies were born with brain damage and abnormally small heads, a condition called microcephaly.

Scientists quickly concluded the Zika virus was the culprit. So when Zika returned last year during Brazil's summer months of December, January and February — when mosquitoes are most active — health officials expected another surge in microcephaly cases.

"We apparently saw a lot of cases Zika virus in 2016. But there was no microcephaly," says Christopher Dye of the World Health Organization.

Health officials were predicting more than 1,000 cases of microcephaly in the northeast of Brazil last year. But there were fewer than 100, Dye and his colleagues report Wednesday in the New England Journal of Medicine.

"This is a huge, huge discrepancy," Dye says. "So what could possibly be the explanation for that?"

Scientists aren't sure, Dye says. But he and his colleagues suggest a few possibilities in their study.

First off, Dye says, health officials could have vastly overestimated the number of Zika cases in Brazil.

Zika can be misdiagnosed as another mosquito-borne virus, called chikungunya. Both viruses cause a fever, a rash and joint pain. "So chikungunya can easily be mistaken for Zika," Dye says.

But chikungunya doesn't cause microcephaly.

So perhaps Brazil actually didn't have that many Zika cases in 2016. And in turn, there weren't a lot of babies born with microcephaly.

Now for this theory to hold true, we're talking about thousands of Zika cases being mistaken for a totally different virus that's not even closely related to Zika. Could this really happen?

But Albert Ko at Yale School of Public Health doesn't quite buy it.

"Misdiagnosis is a reasonable hypothesis. But it's not clear that this explanation accounts for the whole story," says Ko, an epidemiologist, who is studying mothers and babies born with Zika in the northeast part of Brazil.

Ko think's there's another possible explanation: Zika might not be working alone. When a pregnant woman contracts Zika, that might not be enough to cause microcephaly in all cases.

Since the surge in Brazil's microcephaly cases in 2015, many scientists began to wonder whether a second virus could be involved. Maybe another infection combines with Zika to make the disease worse and increase the risk of birth defects.

Dye agrees that this phenomenon could be contributing to the overestimation of microcephaly cases.

In particular, scientists have their eyes on another mosquito-borne virus, which is common in Brazil, called dengue. In 2015, the country recorded more than 1.5 million cases of dengue, including many in the northeast, where many of the birth defects occurred.

"Everything is probably speculation at this point," Ko says. "But many groups are concerned about the exposure to dengue in Brazil."

Dengue is a complex virus. There are actually five different versions. Prior exposure to one version of dengue can actually make your illness worse when you're exposed to a second version.

"So another hypothesis is that prior exposure to dengue may actually enhance or promote the risk of birth defects from Zika," Ko says.

Right now, there is no evidence that a dengue infection exacerbates the symptoms of Zika — or increases its risk to pregnant women.

But several studies suggest it could happen. For starters, the presence of dengue antibodies helps the Zika virus infect cells in a petri dish.

And now, scientists are reporting that dengue antibodies make a Zika infection more deadly in mice.

Typically mice don't get Zika. But a team at Mount Sinai School of Medicine in New York engineered the animals to be susceptible to a Zika infection by crippling their immune systems.

The engineered mice get a fever and show signs of neurological problems when they're infected with Zika. Fewer than 10 percent of them die from the infection.

But when the mice received dengue antibodies before the Zika infection, the outcome was quite different. More than 80 percent of the mice died after eight days, immunologist Jean Lim and her colleagues report Thursday in the journal Science.

So now the big question is: Does a similar phenomenon occur in people?

Ko is working on epidemiological studies in northeast Brazil, right now, to see whether that is the case. If the dengue theory turns out to be true, it could mean the global threat of Zika for pregnant women is less dire than scientists originally thought.