Shot By Her Boyfriend And Now Using A Wheelchair, She Found A 'New Me'

Shot By Her Boyfriend And Now Using A Wheelchair, She Found A 'New Me' 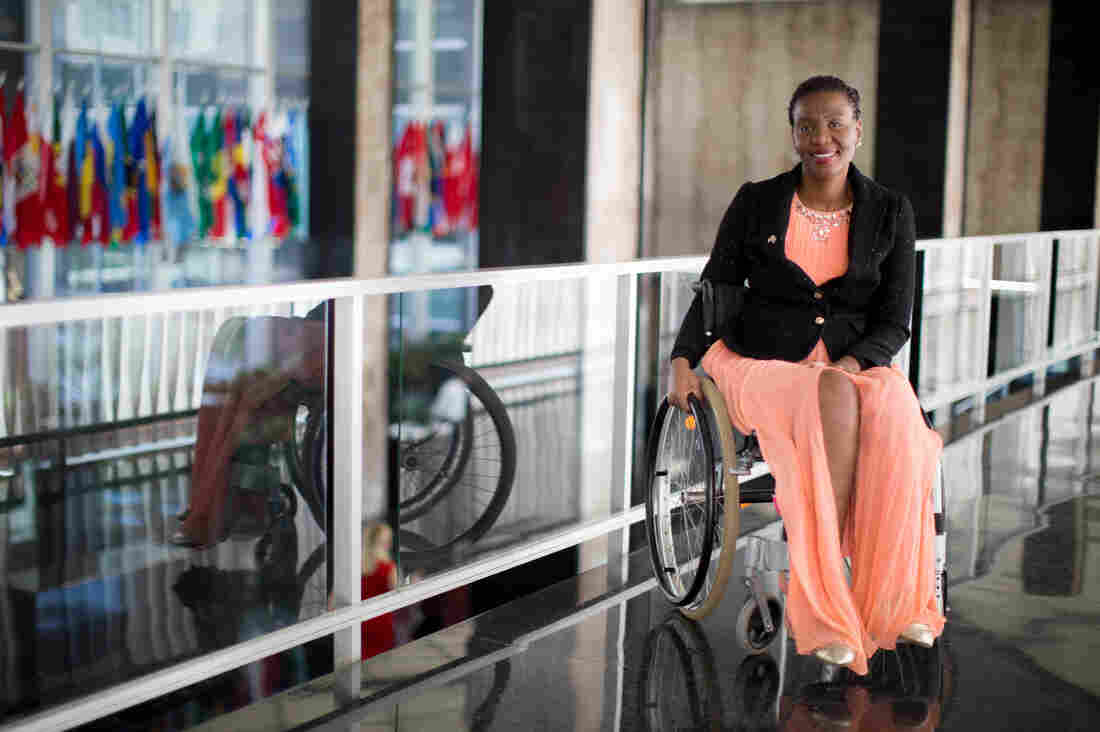 Malebogo Malefhe was honored with a 2017 International Women of Courage award at the U.S. State Department. Ryan Eskalis/NPR hide caption 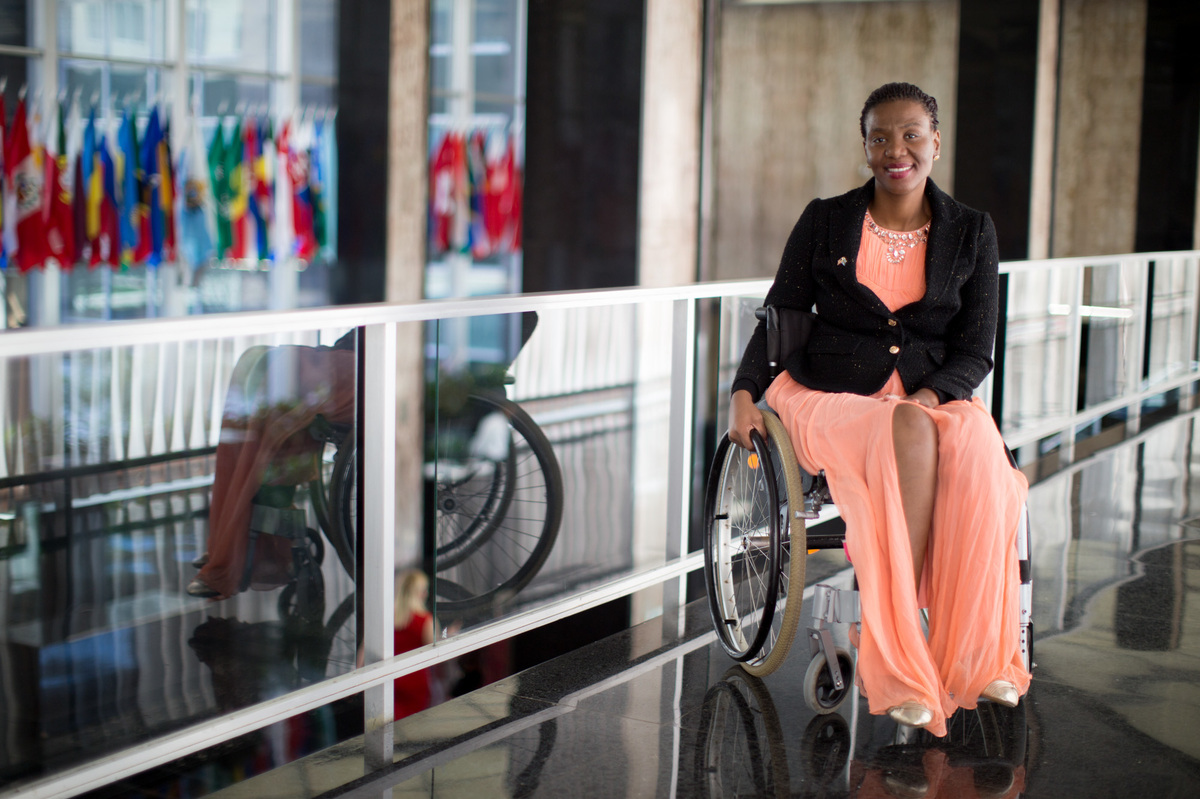 Malebogo Malefhe was honored with a 2017 International Women of Courage award at the U.S. State Department.

When people find out that Malebogo Malefhe uses a wheelchair because she was shot by her boyfriend, the first question they ask is: "What did you do to him?"

Now Malefhe, who sustained eight bullets from her boyfriend of 10 years, wants to make sure that no woman who has faced domestic abuse is asked this question ever again.

The incident in 2009 nearly cost Malefhe her life. Since then, she has devoted herself to fighting gender-based violence in her native Botswana and teaching women that when men hurt them, it's not their fault.

This year, the U.S. State Department gave her the 2017 International Women of Courage award. Now in its 11th year, the prize recognizes women who have put their lives on the line to improve their communities.

"Malebogo is being honored for her tenacity, strength and resilience to help other women and girls overcome the scourge of domestic violence," said Thomas A. Shannon Jr., undersecretary for political affairs at the State Department, speaking at the awards ceremony in Washington, D.C., on Wednesday.

Malefhe, 37, a former basketball player for Botswana's national team, also advocates for the advancement of women in sports, with a focus on women with disabilities. She spoke with us about the shooting, her goals and how she stays motivated to help others. This interview has been edited for length and clarity.

It's a tragic story. After your boyfriend shot you, he took his own life.

They call it passion killing, and it's been a trend [in Botswana] over the past 15 to 20 years. You hear stories of men in relationships who disagree about certain things, then brutalize women or hang themselves.

Passion killings seem to be a common topic in the news, and there's been a study about their portrayal in the media. And in a six-month period in 2009, the police reported 89 deaths in Botswana from crimes of passion — seven men and 82 women. Where do you think this horrific phenomenon stems from?

We have cultural norms that limit women, like the bride's price — the dowry. It bounds women to men and makes men think that once they have paid the price, then they own the woman. Culturally, women are not allowed to speak out against their husbands. When they try to talk to them or voice their concerns, men become threatened. They don't really like it. So they take action.

You barely survived. You were left with spinal cord injuries and now you use a wheelchair. How did you find the strength to overcome it all?

I don't want to lie — it was one of the scariest moments of my life. It was not easy. My injury was extensive. I almost lost my life. I had to learn how to use my body again. I had to learn to live over again. My friends and family stood by me and gave me the hope to keep living my life.

To find myself in that bottomless pit took so much courage to rise. And when I did, I looked at my life and said, I can use my story to help women. If I don't tell my story, who else is going to do that?

Did you ever feel sorry for yourself?

Yes I did. Absolutely, I felt [starts to cry] sorry for myself so many times. I regretted so much. It was not like it just happened that night. The red flags had always been there. I just needed to have spotted the moment and left.

How are you helping women make sure they never have to go what you went through?

I tell women that every time a crime is perpetrated, they should report it. But they report issues of abuse, then withdraw them. It's difficult for authorities to follow up on their issues or assist them accordingly. Women need education to open them up to the realization that abuse is prevalent and they need to find ways to overcome it.

What part of your story surprises them the most?

My strength. It still shocks me as well. I don't drown in self-pity. That is past now. Now I am the new me, in a wheelchair. 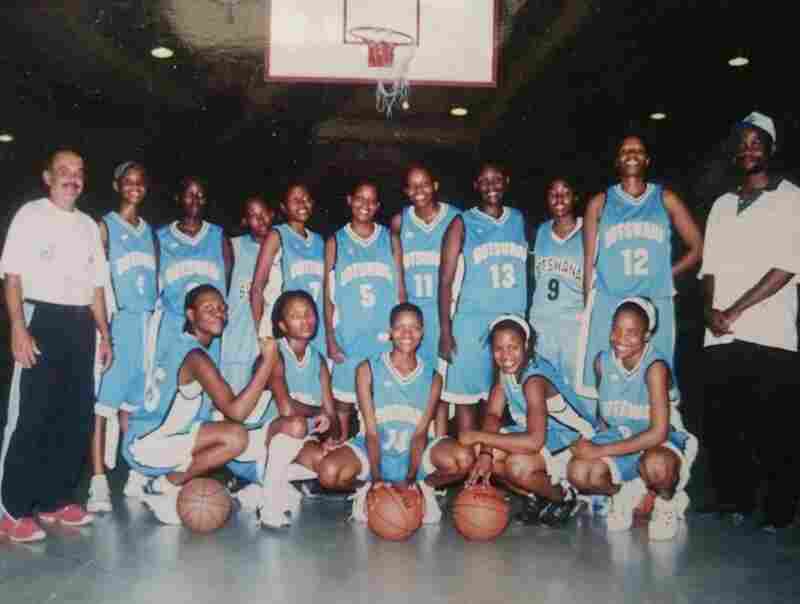 You were a basketball player on Botswana's national team before you were shot. How are you staying connected to sports?

I'm trying to get people in wheelchairs to partake in the Paralympics. I'm trying to get as many women involved in this as possible. At this point, I'm the only one playing [basketball] with men. But I know there are so many women who have this same potential.

You're also a champion of "self-love." What does that mean, exactly?

We meet monthly with a group of girls. They are from small villages, impoverished; many are school dropouts. We teach them the value of living your purpose. To do that, they have to look inside themselves and note what they want to do with their lives. If they know this, it will help them be vigilant about their own lives.

I'm just in the right place.