Accessibility links
Diabetes In Mexico: An Epidemic And The No. 1 Killer : Goats and Soda Diabetes has become a public health crisis in Mexico. The government is struggling to pay for care and slow the rate at which people develop the life-threatening metabolic disorder. 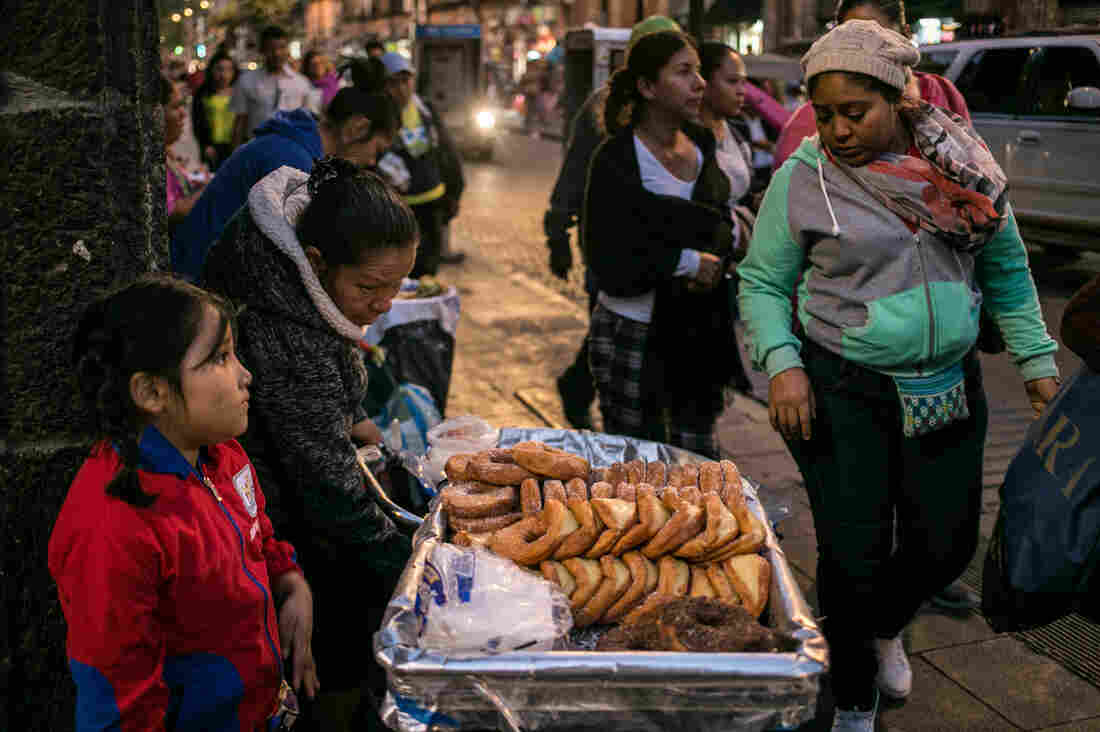 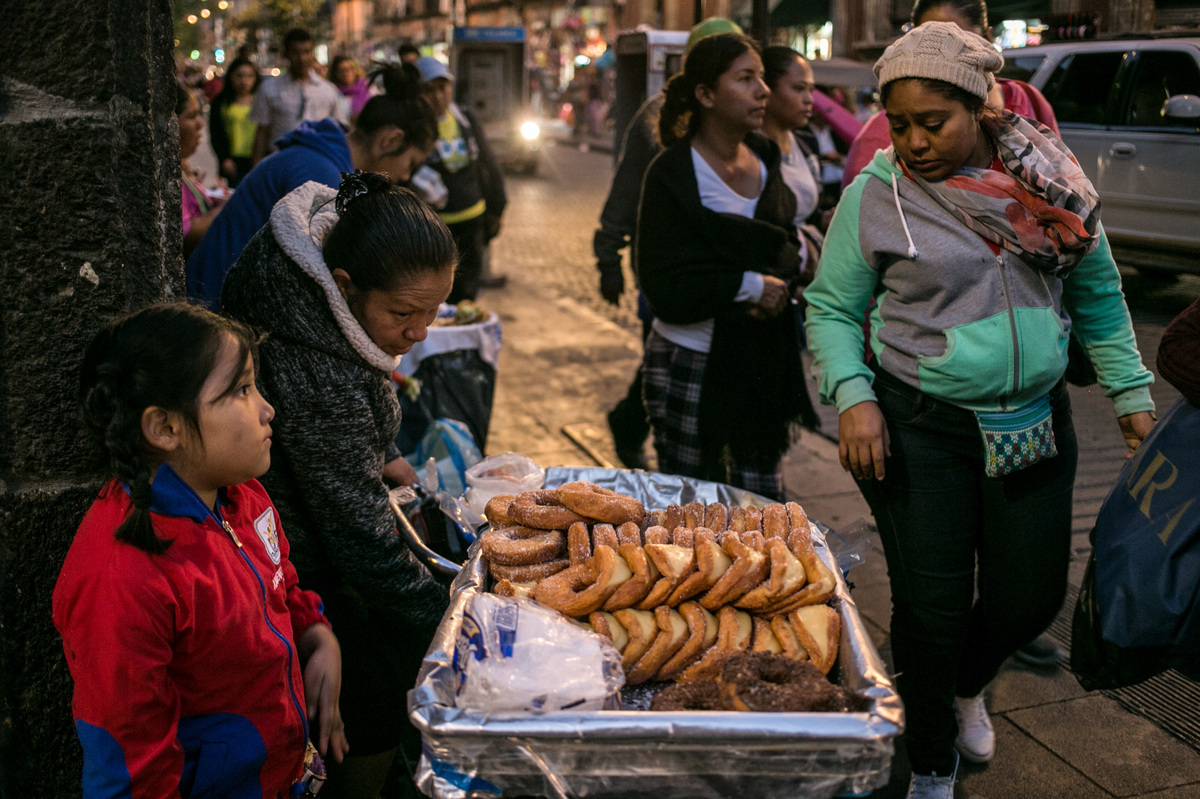 A family sells pastries in Mexico City. As Mexicans' wages have risen, their average daily intake of calories has soared.

Mario Alberto Maciel Tinajero looks like a fairly healthy 68-year-old. He has a few extra pounds on his chest but he's relatively fit. Yet he's suffered for the last 20 years from what he calls a "terrible" condition: diabetes.

"I've never gotten used to this disease," he says. Maciel runs a stall in the Lagunilla market in downtown Mexico City. This market is famous for its custom-made quinceañera dresses and hand-tailored suits.

Diabetes has come to dominate Maciel's life. It claimed the life of his mother. He has to take pills and injections every day to keep it under control. 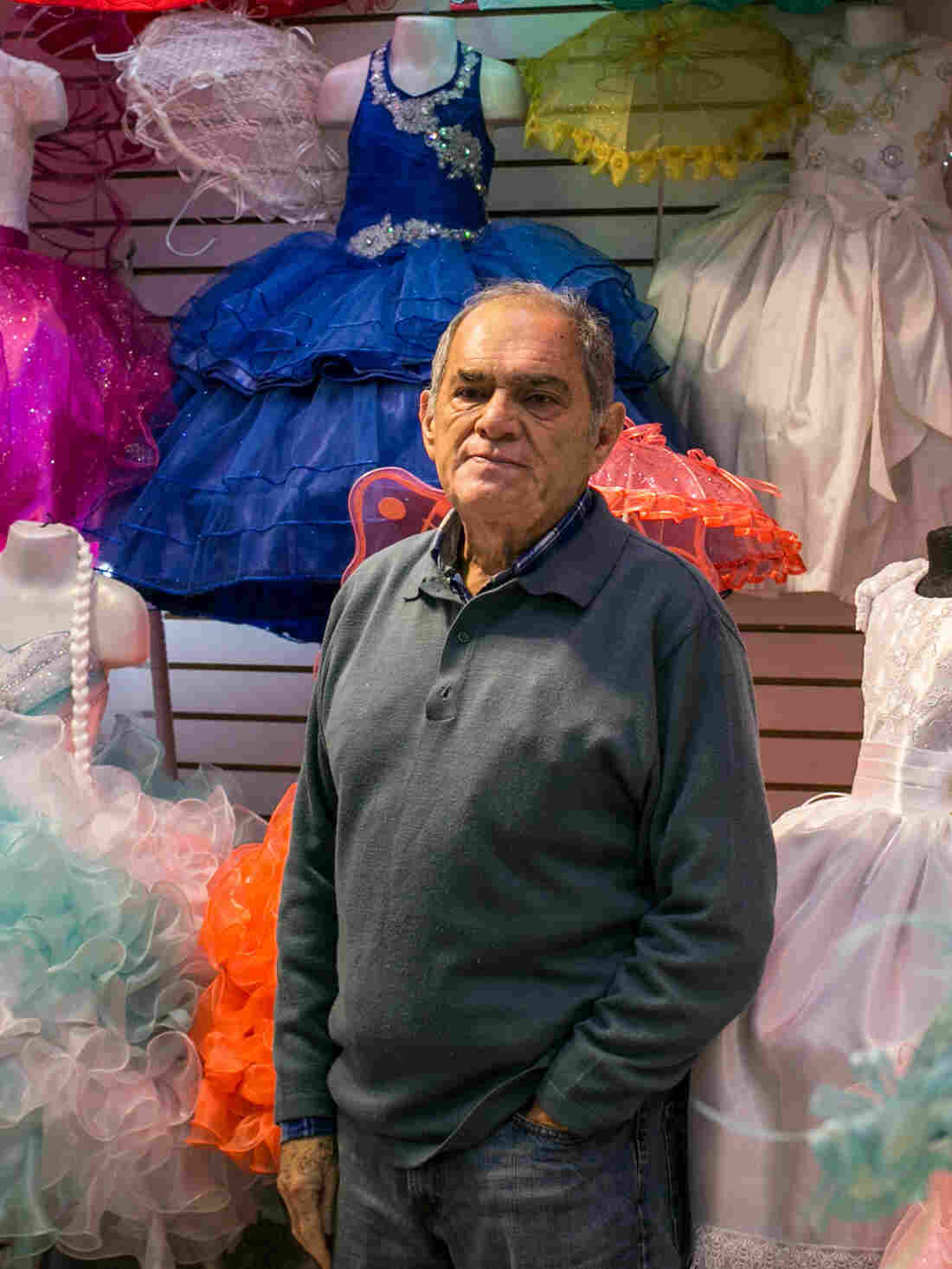 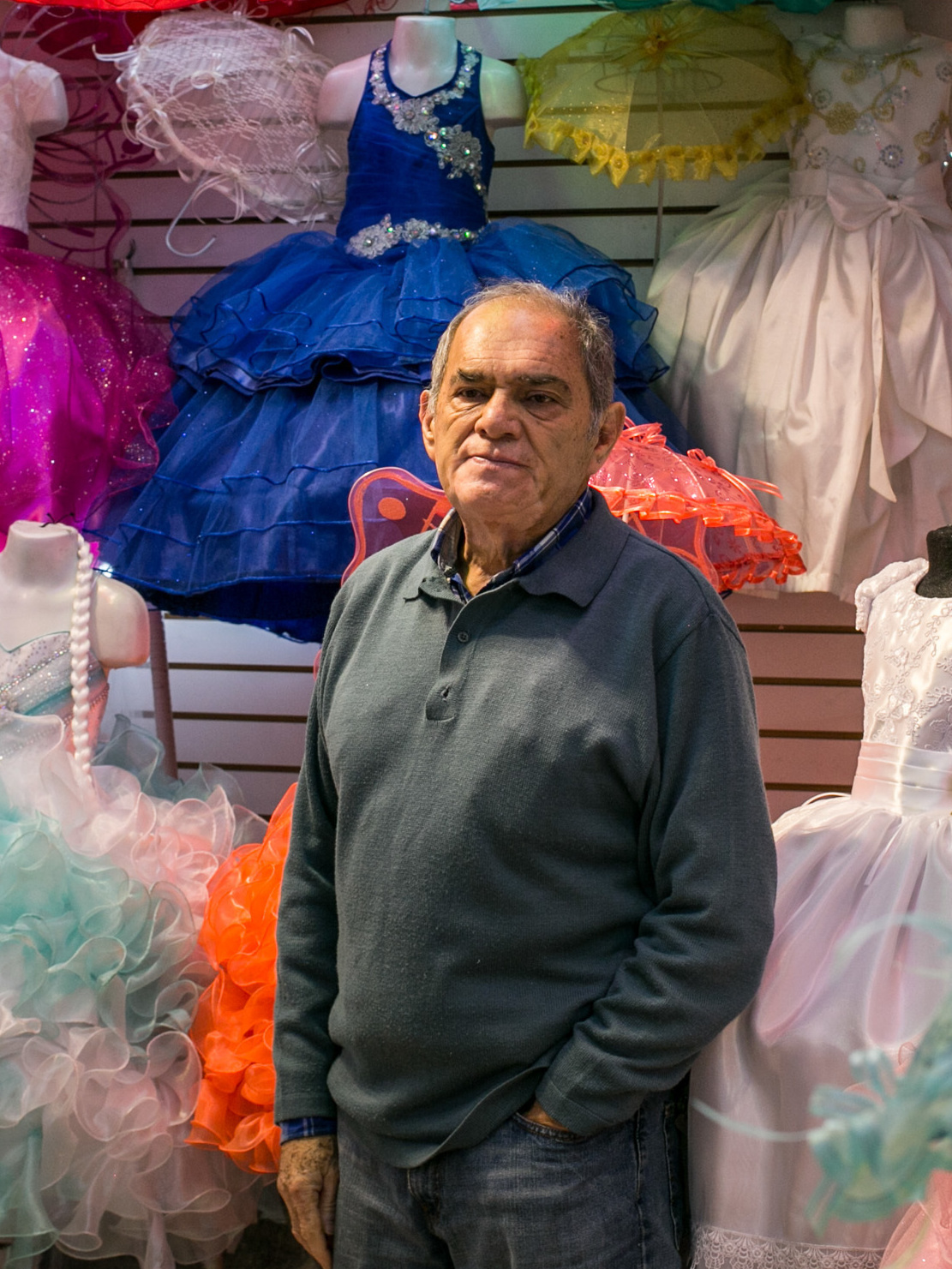 "I've never gotten used to this disease," says Mario Alberto Maciel Tinajero, at his dress shop in the Lagunilla market. "Imagine not being able to eat a carnitas taco!"

And because of the disease he's supposed to eat a diet heavy in vegetables that he views as inconvenient and bland. "Imagine not being able to eat a carnitas taco!" he says with indignation. His doctors have told him to stop eating the steaming hot street food that's for sale all around the market — tacos, tamales, quesadillas, fat sandwiches called tortas. His eyes light up when talks about the roast pork taquitos and simmering beef barbacoa that he's supposed to stay away from.

"A person who has to work 8 or 10 hours has to eat what's at hand, what's available," he says. "It's difficult to follow a diabetic diet. The truth is it's very difficult."

Diabetes is the leading cause of death in Mexico, according to the World Health Organization. The disease claims nearly 80,000 lives each year, and forecasters say the health problem is expected to get worse in the decades to come. By contrast, in the U.S. it's the sixth leading cause of death, with heart disease and cancer claiming 10 times more Americans each year than diabetes.

Rising rates of obesity combined with a genetic predisposition for Type 2 diabetes has caused a slow steady rise in the condition in Mexico over the last 40 years. Now roughly 14 percent of adults in this country of 120 million are living with what can be a devastating and even fatal health condition. Diabetes poses an increasing burden on the nation's hospitals and clinics. The surge in diabetes threatens the very stability of Mexico's public health care system, according to new reports.

For many people with diabetes in Mexico, like Maciel, managing the condition is a constant and significant challenge.

"I'd say I have it about 50 percent under control," he says, even though he was diagnosed two decades ago. "I take my medicine. I inject my insulin twice a day, in the morning and the night. I try to eat a proper diet as much as I can."

At times he says he can't afford his medications. And trying to cut down on the amount of sugar, salt and fat in his diet, as his doctors tell him he should, is easier said than done.

And Maciel's experience helps explain how Type 2 diabetes has become the leading cause of death in Mexico.

Type 2 diabetes is often considered a lifestyle disease because it's far more likely to develop in people who are overweight. Mexico has seen a rapid increase in obesity, with the number of people categorized as overweight and obese tripling over the last four decades.

The obesity problem is in part a side effect of Mexico's economic progress. As wages have risen, the average daily intake of calories has soared. In 2012 Mexico was the world's top per capita consumer of soda in the world guzzling 176 liters per person per year, according to the Mexican government. That's nearly 500 cans of soda for every man, woman and child. (Mexico was recently overtaken by Argentina, the U.S. and Chile.) Coca-Cola is practically the national drink in Mexico. Type 2 diabetes has skyrocketed as soda consumption has risen.

"In the middle of the 1970s and especially after the '80s, the prevalence of diabetes exploded," says Dr. Carlos Aguilar Salinas, the vice head of the endocrine department at Mexico's National Institute of Medical Sciences and Nutrition in Mexico City.

The disease can lead to serious eye problems including blindness, nerve damage that requires amputations and kidney failure, among other issues.

Mexico's public health care system attempts to manage the huge number of people with diabetes by trying to get them to manage their blood sugar levels, alter their diet and exercise more.

But there diabetes is typically a lifelong condition. Once someone is diagnosed, the goal is to get the disease under control and keep it from getting worse.

Just around the corner from where Mario Alberto Marciel Tinajero has his dress-making shop, Dr. Rosa Estrella Calvillo Gomez runs a one-room medical clinic in the Lagunilla market. 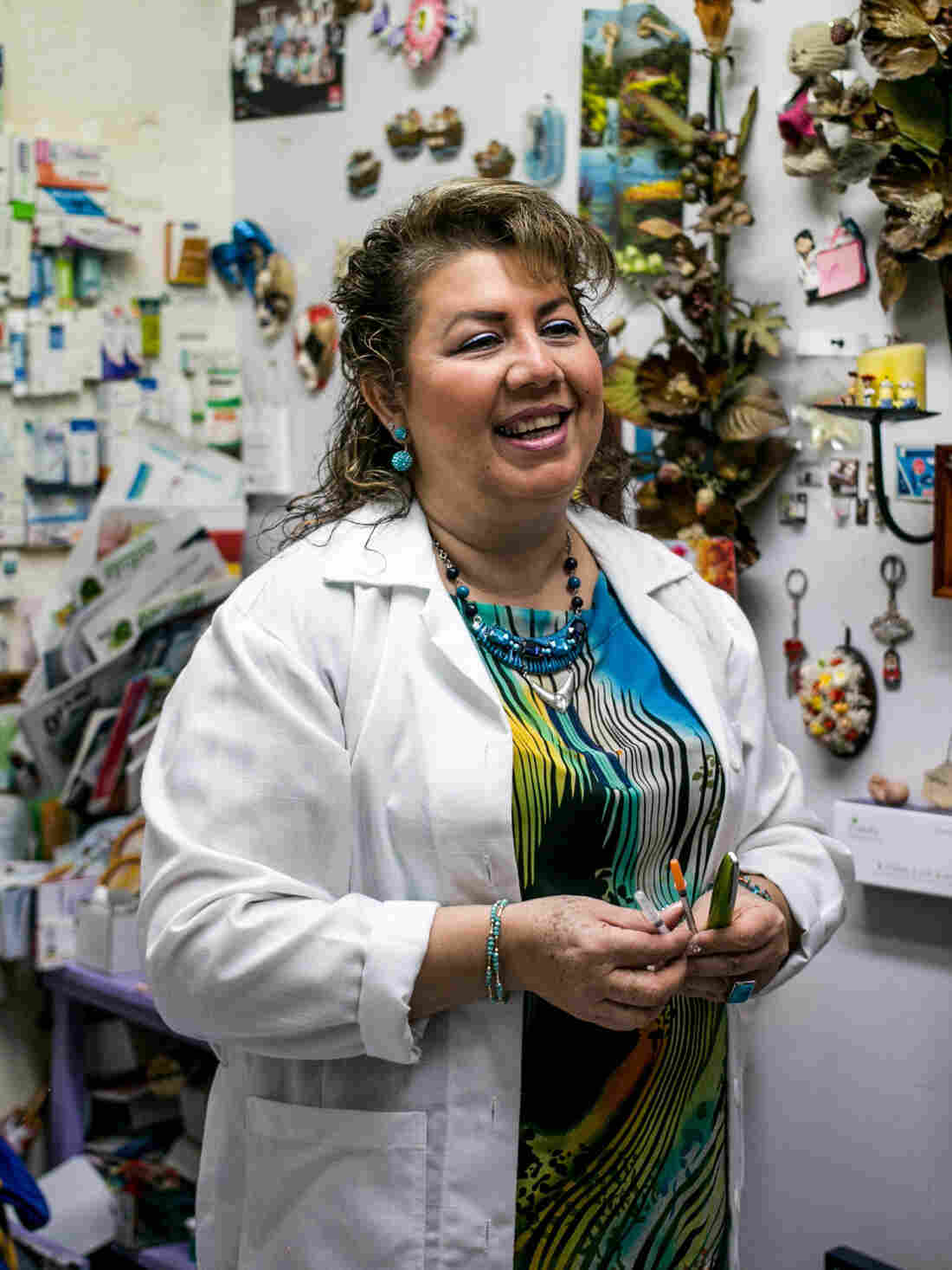 Dr. Estrella Gomez says her patients don't want to accept that they have a disease for which there is no cure. "Tell me anything but don't tell me I'm a diabetic," they say to her. Meghan Dhaliwal/for NPR hide caption 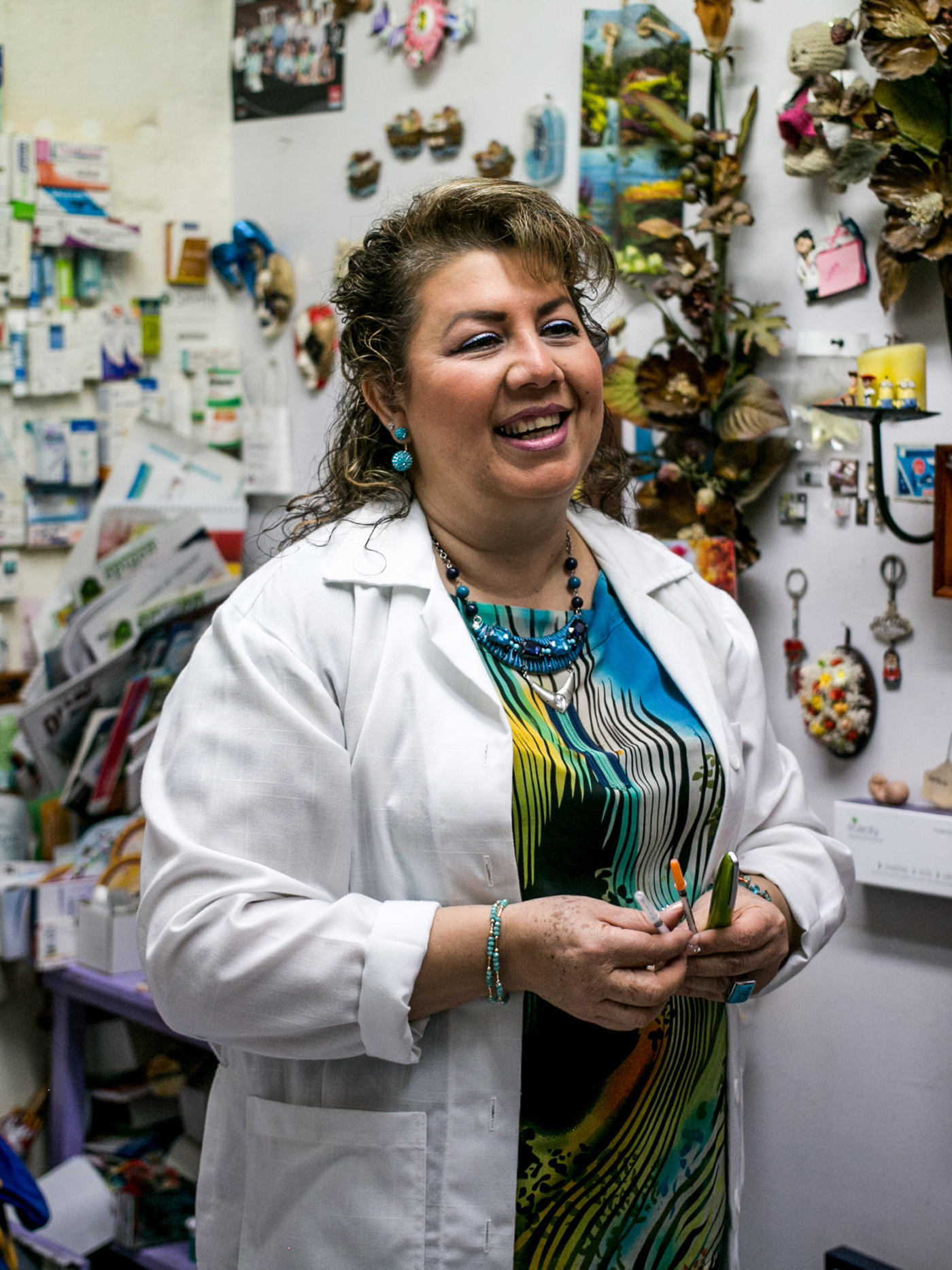 Dr. Estrella Gomez says her patients don't want to accept that they have a disease for which there is no cure. "Tell me anything but don't tell me I'm a diabetic," they say to her.

The free clinic was set up by the local government. People can come in for any kind of health problem. But Calvillo says roughly half her patients are coming for complications with diabetes.

"Diabetics don't just come in with high blood sugar," Calvillo says sitting behind a desk overflowing with promotional drug samples that she gets from pharmaceutical representatives. "It's about controlling multiple health problems at once," she says, and most of her patients with diabetes don't have the disease under control.

"The problem that I have here first, is the denial and second, the cost of the medication."

Patients don't want to accept that they have a disease for which there is no cure. "Tell me anything but don't tell me that I'm a diabetic,'" she says they tell her. She melodramatically puts her hands over her eyes and shakes her head. "They deny it."

Also, diabetes isn't an easy condition to manage. The public health system treats severe complications like nerve damage or blindness, although dialysis and kidney transplants are not available. For the daily management of diabetes, patients are largely on their own. 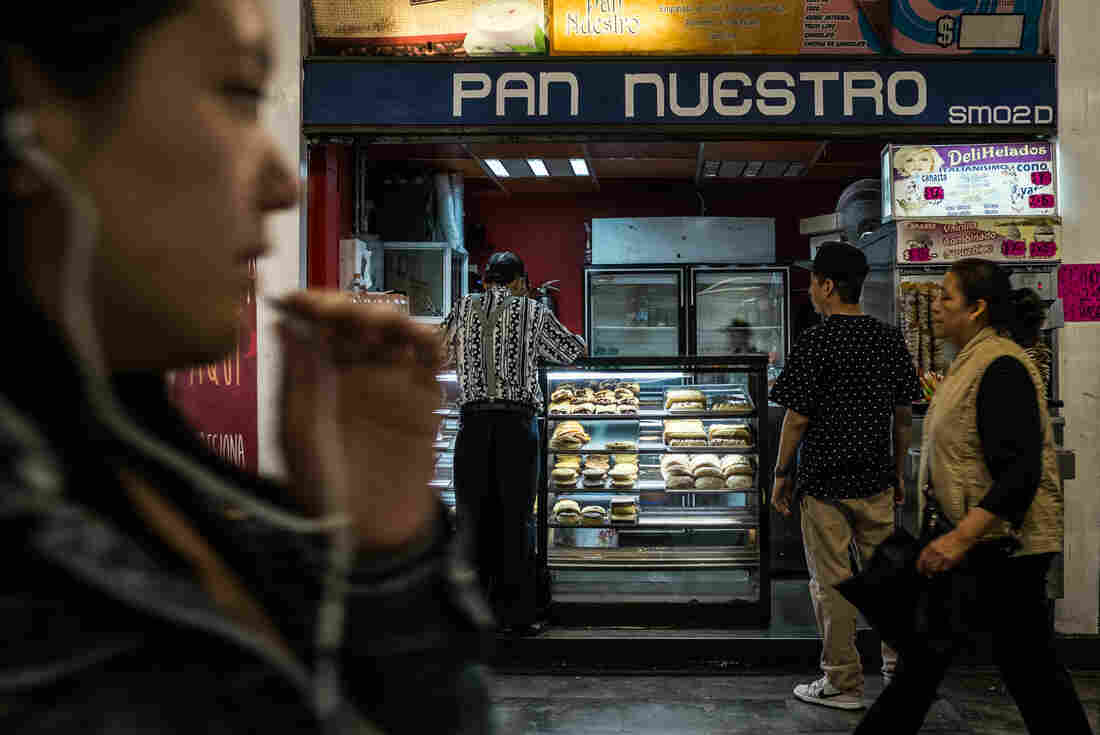 Easy access to rich foods, such as those sold at this bakery in a Mexico City Metro station, contributes to Mexico's high rates of obesity and diabetes. Meghan Dhaliwal/for NPR hide caption

Calvillo says a diabetic can easily spend $150 a month out of pocket on insulin injections, blood sugar test strips and medications for hypertension and other complications.

"To get excellent control of diabetes costs a lot of money," she says, "It costs as much as renting an apartment."

Mario Alberto Maciel Tinajero is one of the doctor's patients. He says coping with the disease is a real struggle, and many people with diabetes are desperate.

"The most dangerous thing for diabetics is to fall into the hands of charlatans, swindlers who offer miracle products," he says.

As diabetes took its final toll on his mother, he watched as she spent thousands of pesos on useless — he thinks possibly even toxic — herbs and injections. After both her feet had been amputated and doctors were only offering palliative care, salesmen came along offering "magical" injections, alleging that they'd give her relief.

"With the promise of a cure, you can be left in the street with nothing," he says. "Absolutely nothing."

Maciel is grateful to have Dr. Calvillo to help him grapple with the condition.

An earlier Web version of this story misspelled the name of Mexico city's Lagunilla market as Languilla and misspelled quinceañera.