Accessibility links
As A Boy, Dr. Thumbi Mwangi Learned A Key Lesson About Medicine By Rubbing The Ears Of Calves : Goats and Soda Dr. Thumbi Mwangi had a eureka moment when he began researching a cattle disease in the U.S. The treatment was the same thing his dad the farmer had him do when he was growing up in Kenya.

As A Boy, He Learned About Science By Rubbing Calves' Ears

As A Boy, He Learned About Science By Rubbing Calves' Ears 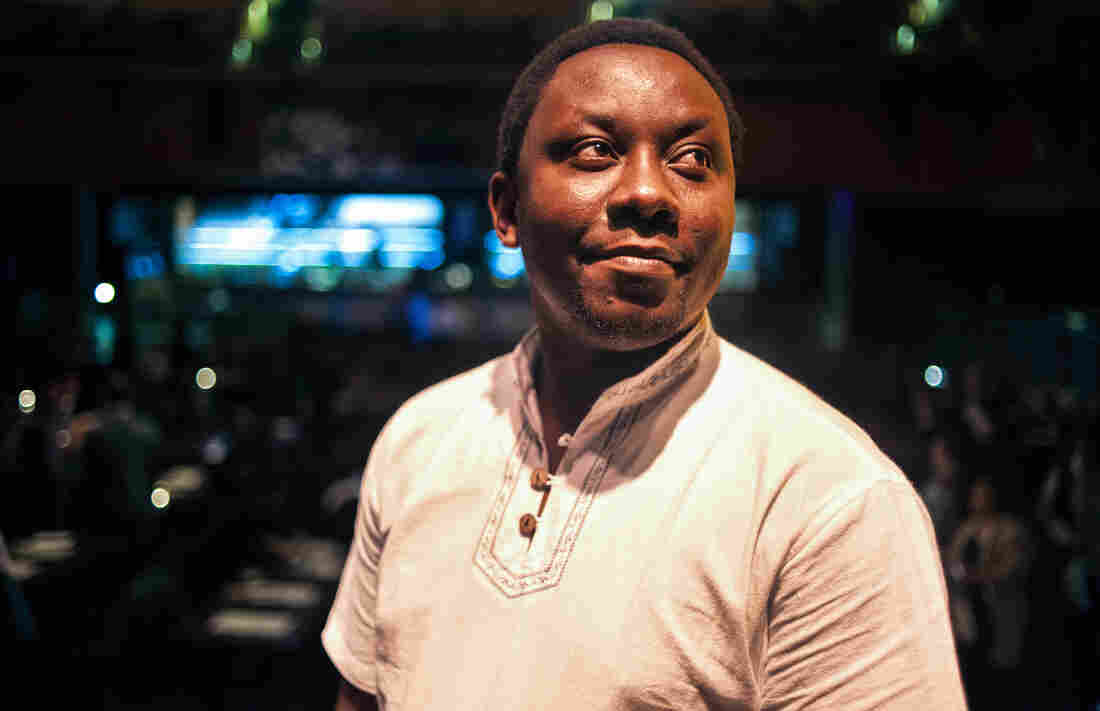 Dr. Thumbi Mwangi, an infectious disease epidemiologist from Kenya, at Howard Theatre in Washington, DC, on Nov. 29, 2016. In the U.S., Mwangi worked on a vaccine for cows that aimed to combat the same disease he saw the bovine battle in Kenya as a kid. Akash Ghai/for NPR hide caption 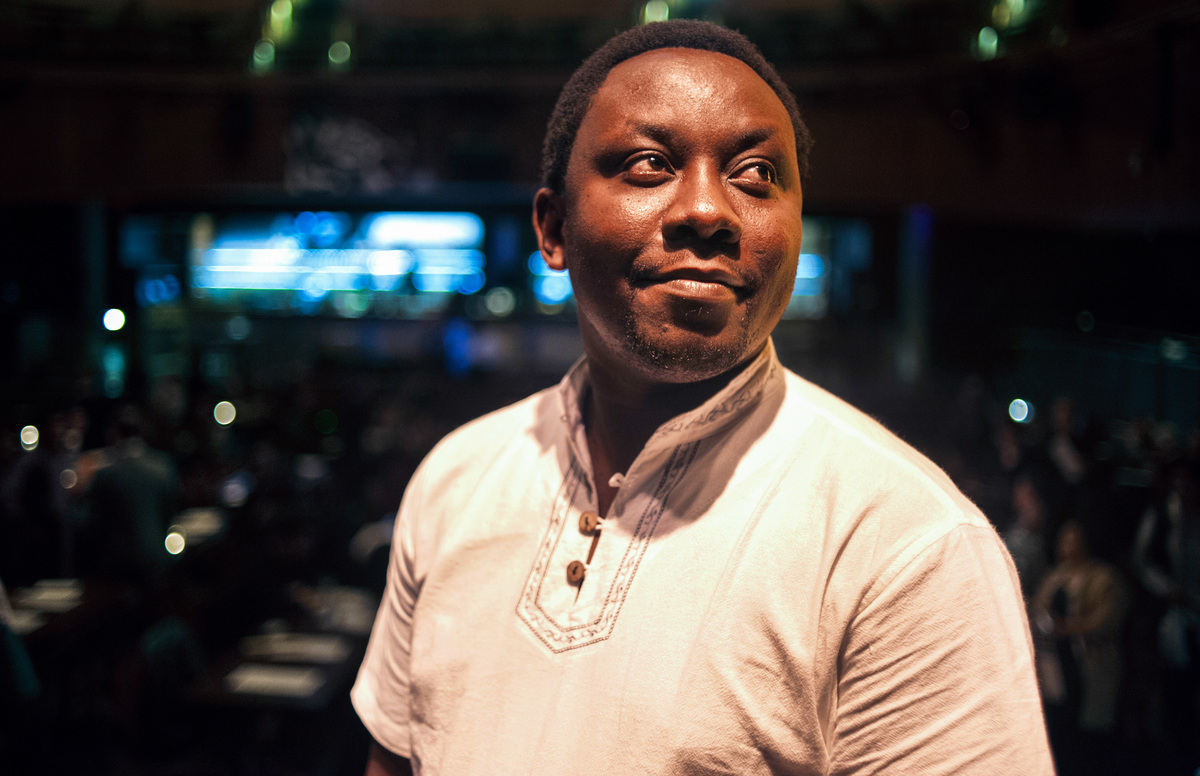 Dr. Thumbi Mwangi, an infectious disease epidemiologist from Kenya, at Howard Theatre in Washington, DC, on Nov. 29, 2016. In the U.S., Mwangi worked on a vaccine for cows that aimed to combat the same disease he saw the bovine battle in Kenya as a kid.

When Dr. Thumbi Mwangi was a child growing up in Kenya, his father would send him out to care for the calves.

There was a disease — East Coast fever — infecting cattle. If the cattle were infected with the protozoan, it could be deadly. Mwangi's job was to rub the young cattle gently behind the ears, to see if he could feel their lymph nodes. If the lymphs were swollen, it could mean that the calf was getting sick. If the illness was treated in time with buparvaquone, the calf could be saved — and the animal would be immune for life.

"We would treat the cattle through injections using an anti-protozoal drug that is only effective when treatment is started early," Mwangi says. "Palpating the lymph nodes allowed us to catch the disease early — before other clinical signs would be manifest."

Later, Mwangi became a veterinarian and a researcher. One day, as a student, he found himself working on a vaccination for this same East Coast fever. To make the vaccine, the scientists would let thousands of ticks feed on an infected cow. The ticks, full of contaminated blood, were then ground up. The resulting solution would contain particles of the parasite. The concoction would be injected into cows, who would then, subsequently, be given the medication for the parasite. And the cows would be immune.

As he was grinding up the ticks, Mwangi realized that what he was doing — making vaccines for these cows — was exactly what his father had made him do. He would wait for the cows to get sick and treat them at the first sign of illness, effectively vaccinating them for life. The only difference was that the veterinarians got the cows sick on purpose.

"That is when I realized that farmers are scientists," he would later recall. 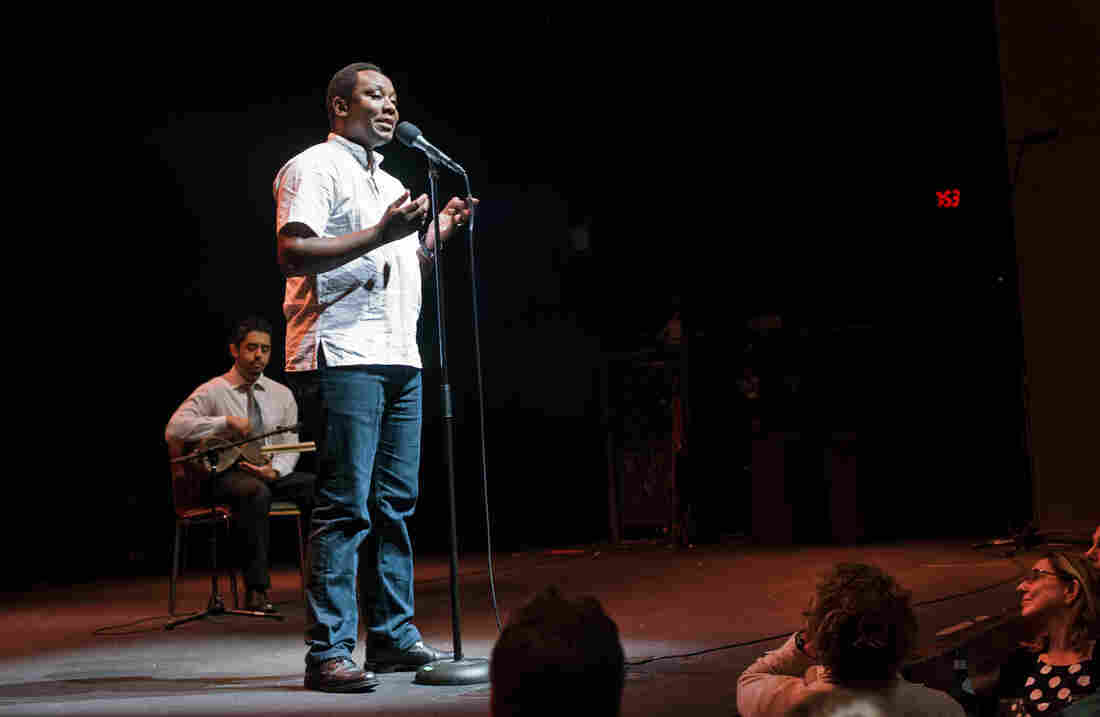 Mwangi, an assistant professor at Washington State University, told this story on the Moth mainstage as part of the Aspen Ideas Festival. Afterward, we sat down with him to talk about what scientists can learn from the communities they serve.

Can you expand on what you meant when you said that farmers are scientists?

It is important to realize that these farmers have skills and knowledge of these diseases. They know that you can look at the lymph nodes and see if the animal is sick. They know that if you treat it, the animal will stay safe, that it has a natural immunization with a bit of help from the treatment. That is what science is: observation and action — and then results.

Why did you choose to tell this story on the Moth mainstage?

I think that at this moment we're really experiencing a lot of emerging diseases, particularly zoonotic diseases. They're what we refer to as neglected tropical diseases. If you wait for them [to show up] at the hospital, you're going to think that the community is not suffering from them, because the community that is suffering is often rural and impoverished and can't access health care.

So if you see cases at the hospital, you'd think it's a small problem. But once you go back to the community, you can do contact tracing, and you'll find that there are lots and lots of people suffering from these diseases that never got into the system.

In my life as a scientist, I see a lot of that. I know that for us to be able to do good surveillance, we must be a part of the community. Sometimes, when we go to communities, we ignore the knowledge they already have.

Can you give an example of how working with communities improves disease surveillance?

One of the diseases I work with is rabies. If you ask the WHO how many rabies cases are reported in southern Africa, they'd say perhaps 10 or 12 a year. It's not that their data is bad, it's that the health system does not see those cases.

For example: If you get bitten by a dog on your leg today, a month later you have forgotten about the wound while the [rabies] virus has been moving up to your central nervous system, and you start to have issues. But instead, people think that it is cerebral malaria, so they put you on drugs. But you're not getting well, so then they put you on anti-psychotic drugs, and then the next time they decide maybe it was witchcraft. Once you've died, not everyone is interested, and the only way to confirm is to do a post-mortem. So all those cases get forgotten.

What we try to do is get a case report from a hospital when someone comes in with a bite. And then we want to follow it back to where it came from, and trace it back to see if that dog bit anyone else.

Why did you decide to get involved in research and epidemiology? It's a far cry from veterinary medicine.

I decided to do research because I had a friend with a Ph.D. who was teaching us anatomy. The way he talked about research was so enticing. He told me that you never really get bored. It's not a procedure you do — like when a bone is broken, and you repair it. You can do that 50 times and at some point it's just a procedure for you. But that's not the way with research.

What are you working on today?

Part of my work is with the Kenya Center for Disease Control on a surveillance project. We were looking at infections that occurred in humans and asking what animals they kept and killed. For the last four years, I've been leading this project that looks at surveillance on the human side of disease and the animal side concurrently: Is it a result of shared pathogens or a shared bad environment?

Erin Ross is a former NPR intern and a science writer. Reach her @ErinEARoss