Accessibility links
He Left His Tiny Village In India For The Big City. Now He's Back, Living In A Mud Hut And Loving It : Goats and Soda Most young people in the tiny Indian village of Chanka dream of life in the big city. But Girindra Nath Jha gave up his New Delhi life to return to his birthplace. 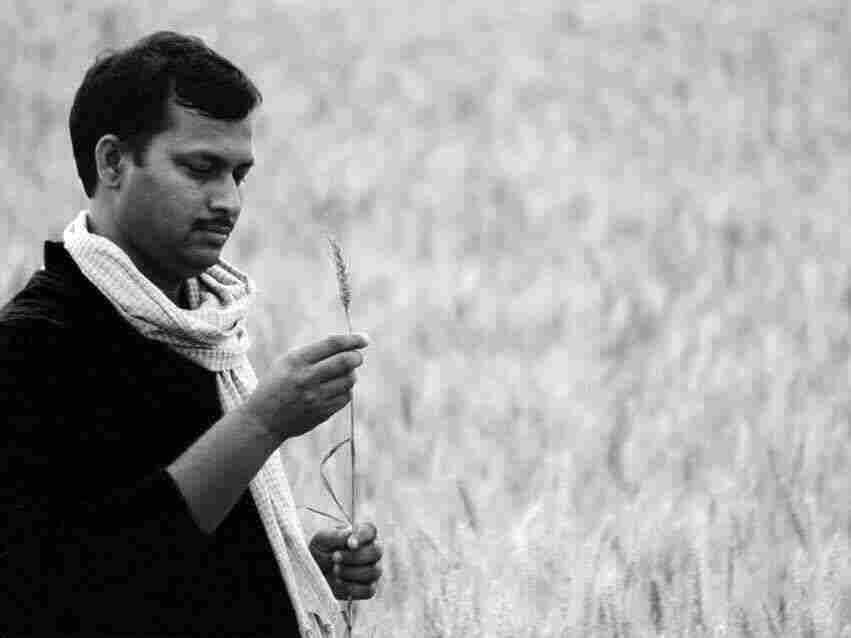 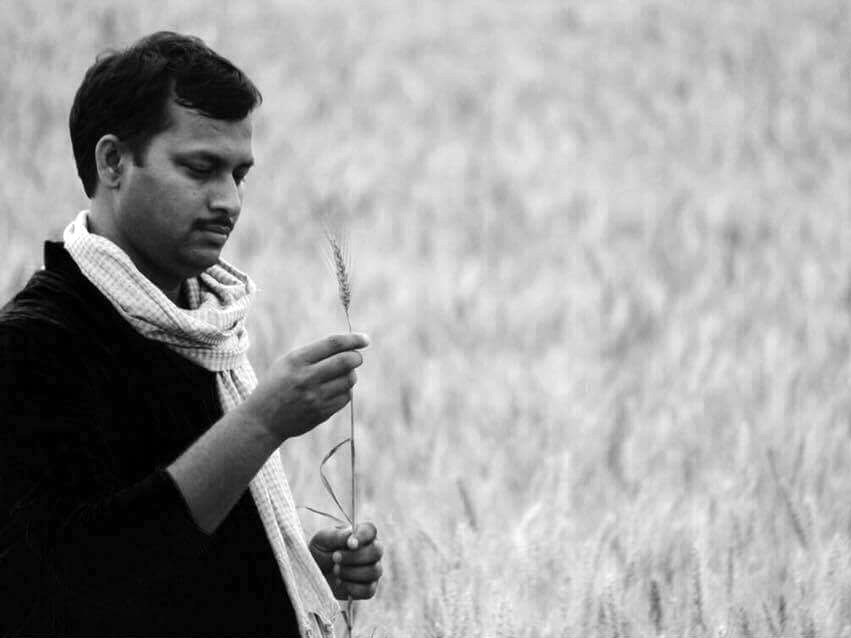 Girindra Nath Jha was born and raised in the tiny village of Chanka, a settlement in the state of Bihar in northern India, close to the Nepal border. It's mostly grassy fields and mud huts with thatched roofs. It gets just seven hours of electricity per day and its first paved road arrived only last year. None of the homes have toilets.

But not Jha, a 34-year-old who wears a cotton scarf around his neck and a happy smile on his face. He understands why other young people leave: "The village doesn't offer them any kind of employment and they don't want to work in the fields."

In India, being a farmer is considered to be backward unless you are a landowner, which means you control hundreds of acres and employ people to work in your fields. For poor villagers with very little land, the only discernible route to success is fleeing to somewhere else, either for education or for work.

The plan doesn't always pan out, particularly when they don't have the skills to land better paying jobs. "In big cities they end up becoming daily wage laborers," Jha notes. "They work in construction, carrying loads of bricks on their heads."

Jha left his village and family after he graduated from high school. He went 500 miles away to New Delhi, where he got a degree in economics from Delhi University — one of India's premier colleges — and obtained a master's degree in journalism from the YMCA Institute of Career Studies. His education helped him land a job as an editor for a newspaper in New Delhi, where he worked for several years. But Chanka never left his mind.

So in 2012, Jha quit his job and returned to his village. He has been living there ever since.

He has trouble describing why he yearned to work on his family's farm. "I have a kind of love affair with Chanka," he says. "It soothes my soul. The childhood memories have never left me."

Most young people throughout India dream of having a life like Jha had outside of the village. People in Delhi laughed at him when he shared that he wanted to give up his career and city life so he could go back and work on his farm.

But he was determined. He wanted to set an example and inspire other young men not to leave their homes and villages, and most of all, not to give up on farming.

India's economy is largely agricultural despite the large number of people migrating from villages to cities — according to the 2011 census, 833 million live in rural areas while 377 million live in urban ones. "The old men and women are left to toil in the fields. They need young people," Jha says. Will he return to the city one day? "Not at all," he vows. "It's not going to happen."

Since returning, he has helped his parents work their land. In addition to the wheat, corn and potato growing in their fields, he has planted 1,000 Kadamb trees. He says it's a long-term plan, because in 15 years he will have a big crop of timber, which can be used to make plywood.

In the meantime, Jha hasn't given up on his journalism career. He continues to write for newspapers and magazines from his village. He writes about village life for city folks. In one recent article, he addressed the government's push for creating "smart cities" and questioned when it would do the same for "smart farmers." Another favorite topic: his love for writing, or as he calls it, "ink and pen."

His friends from New Delhi and even ones from abroad are curious to see what kind of life Jha has created for himself in his village. They often visit.

So last year, Jha started what he calls the "Chanka Residency" for writers. Participants live in a mud hut with him and his family — it's rustic and peaceful, but there's internet. The first guest was Ian Woolford, an American who teaches Hindi language and courses on South Asian culture at La Trobe University in Melbourne, Australia. During his week-long stay, Woolford says, "We sat outside and drank tea by the fire each morning and evening. We pulled radishes from the field and ate them along with vegetables and roti. And we read each other our writing as we produced it, encouraging each other along."

It's an experience Woolford recommends. "I hope that academics, writers and artists might visit — if only out of curiosity — and then fall in love with Bihar, as I did when I first visited," he says. More than 50 other people have come so far.

Even more important to Jha is changing the image of village life among his neighbors. He is committed to bringing people back to their roots and in touch with agriculture.

Armed with two degrees from the capital's top institutions, he has been teaching as much as possible. He says most young men in his village have smartphones; he has been showing them how to use the devices to download apps that are designed for farmers and keep on top of farming-related news about tools, fertilizers and more. He also organizes daily classes for kids on farming, life in the city and some basic English.

Kalpana Devi, the village head, says, "Girindra Nath's residency brings people in the village from all over the world, which is good for the villagers because they get to learn and write. But I often hear parents saying their children are distracted and don't work as hard in the field when the guests from abroad and big cities come to Chanka. They like to hang out with the guests."

This exposure to the outside world may be just what the next generation needs, says Anand Dwivedi, who grew up in Bihar and works at the University of Pennsylvania as a director of the Hindi language and culture program. "Now is a good time since people are more open to different ideas and occupations, professions of different kinds, careers in creative fields," he says.

Getting this education in Chanka could mean young people have less of an incentive to leave. And maybe, like Jha, they'll help write a new future for their village.

Deepak Singh is the author of How May I Help You? An Immigrant's Journey From MBA to Minimum Wage. Contact him @deepakwriter.