Accessibility links
Dr. Raj Panjabi Will Use His $1 Million TED Prize To Help Unsung Health Workers : Goats and Soda Raj Panjabi must use the award "to solve a timely, pressing problem." Here's what he plans to do. 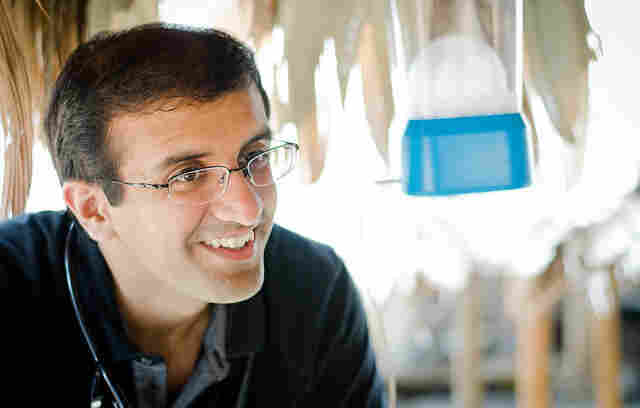 Raj Panjabi knows what health care can be like in a developing country. As a boy in Liberia he never had his eyes checked. When he came to the U.S. at age 9, he found out he had 20/80 vision. Last Mile Health hide caption 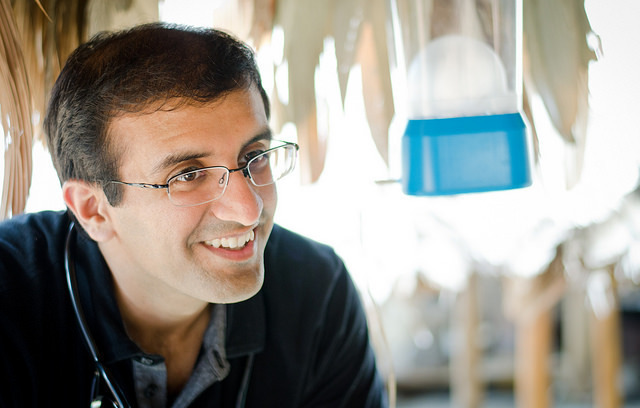 Raj Panjabi knows what health care can be like in a developing country. As a boy in Liberia he never had his eyes checked. When he came to the U.S. at age 9, he found out he had 20/80 vision.

It sounds like a fairy tale. A benefactor gives you a million dollars to make a wish come true.

Only it can't be a selfish wish. The TED annual award goes each year to an "exceptional individual with a creative and bold vision to solve a timely, pressing problem." (TED is a nonprofit dedicated to "ideas worth spreading" and sponsors the TED talks aired on NPR's TED Radio Hour.)

Last December, the 2017 prize winner was announced: Dr. Raj Panjabi. This Tuesday night, he shared the details of his "wish to change the world."

Panjabi, who's a physician at Harvard Medical School and Brigham and Women's Hospital, will use the money to help community health workers. They're non-medical personnel who've been trained to help with health care in remote or underserved places. They keep records, they remind people to get their kids vaccinated, they may test for diseases and provide some kinds of therapeutic treatment.

They're an underappreciated group. Some are volunteers, some are paid. They're usually not college graduates. And they're a group Panjabi knows well. He's the founder of Last Mile Health, whose 300 community health workers work with people in rural Liberia.

Panjabi didn't come up with the idea. Community health workers toiled in Russia in the 1800s. China set up a big community health worker program in the 1920s. They're in many countries today, including the U.S. — 48,000 of them are doing everything from coaching diabetics in Harlem to promoting better nutrition on Indian reservations.

A report on their effectiveness, published in 2012 by the Johns Hopkins Bloomberg School of Public Health, credits community health workers with saving lives — and saving money by helping people get better care so they can stay healthy.

These health workers get some training. But they're not a gang of "cowboy workers," says Panjabi. In Liberia, for example, they're part of a team with a "nurse supervisor" to mentor them and connect patients to clinics when necessary.

Panjabi wants community health workers to learn more and do more, so he'll use his TED money to start the Community Health Academy. It'll be based in Liberia, where he lived until he was 9, with the goal of going global.

Working with educational groups like edX and seeking additional funding, Panjabi wants to use technology to "modernize" the education of community health workers. Instruction will be largely online, geared for the smart phones that are pretty much everywhere. That's a good thing because it might take hours, or even days, for a community health worker to get to a big city. The medical personnel who supervise community health workers will also be able to take classes — for example, on how to be effective trainers.

One potential student, says Panjabi, is a guy in the Liberian village of Voin. He's 29 and his name is Abednego. But he goes by "A.B." When A.B. was in the 8th grade, his parents died and he dropped out of school. He tried various ways to earn a living: a bit of farming, a bit of illegal mining.

Then a couple of years ago, Panjabi's Last Mile Health gave A.B. a job as a community health worker. Not that long ago, Panjabi says, A.B. was looking at a 6-month-old baby named Prince who was not breast feeding and weighed what a 1-month-old would weigh. A.B. measured the child's arm with a color-coded tape. If the arm is extremely thin, that's a sign of malnourishment. The tape measure put the kid in the "so-called red zone," Panjabi says.

So A.B. took the baby in his canoe and paddled for four hours to get him to the nearest town with a clinic.

After being properly nourished, Prince was discharged and sent home with food supplements. "He's now a chubby little guy, pulling himself up to stand and saying a few words," says Panjabi.

So that's a moment in the life of a community health worker. And Panjabi says that A.B.'s words have definitely inspired his million-dollar wish. "This is the first time I have a chance to learn" since dropping out of school, A.B. told the doc. "My brain is getting fresh."