Accessibility links
Boston Marathon Champ Edna Kiplagat Of Kenya Talks About Her 'Passion' For Running : Goats and Soda The daughter of peasant farmers, Edna Kiplagat was the fastest woman in the Beantown race by nearly a minute. 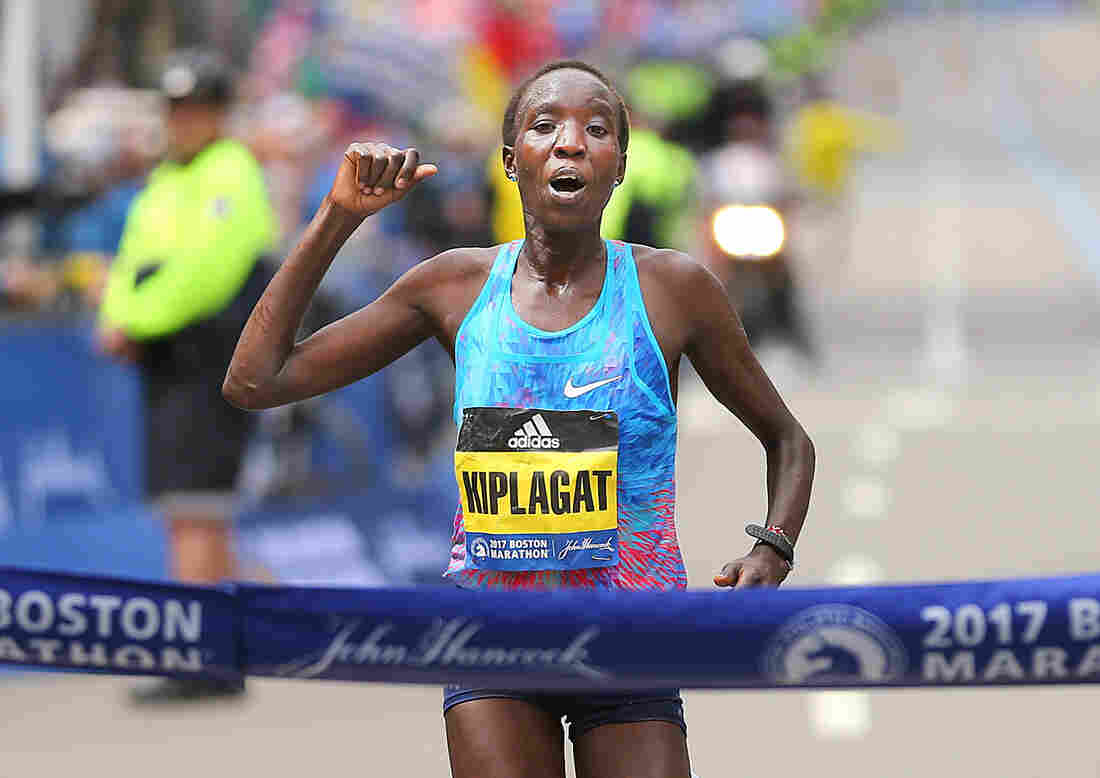 Edna Kiplagat crosses the finish line of the 121st Boston Marathon on April 17. It was her first time running the race. John Tlumacki/Boston Globe via Getty Images hide caption 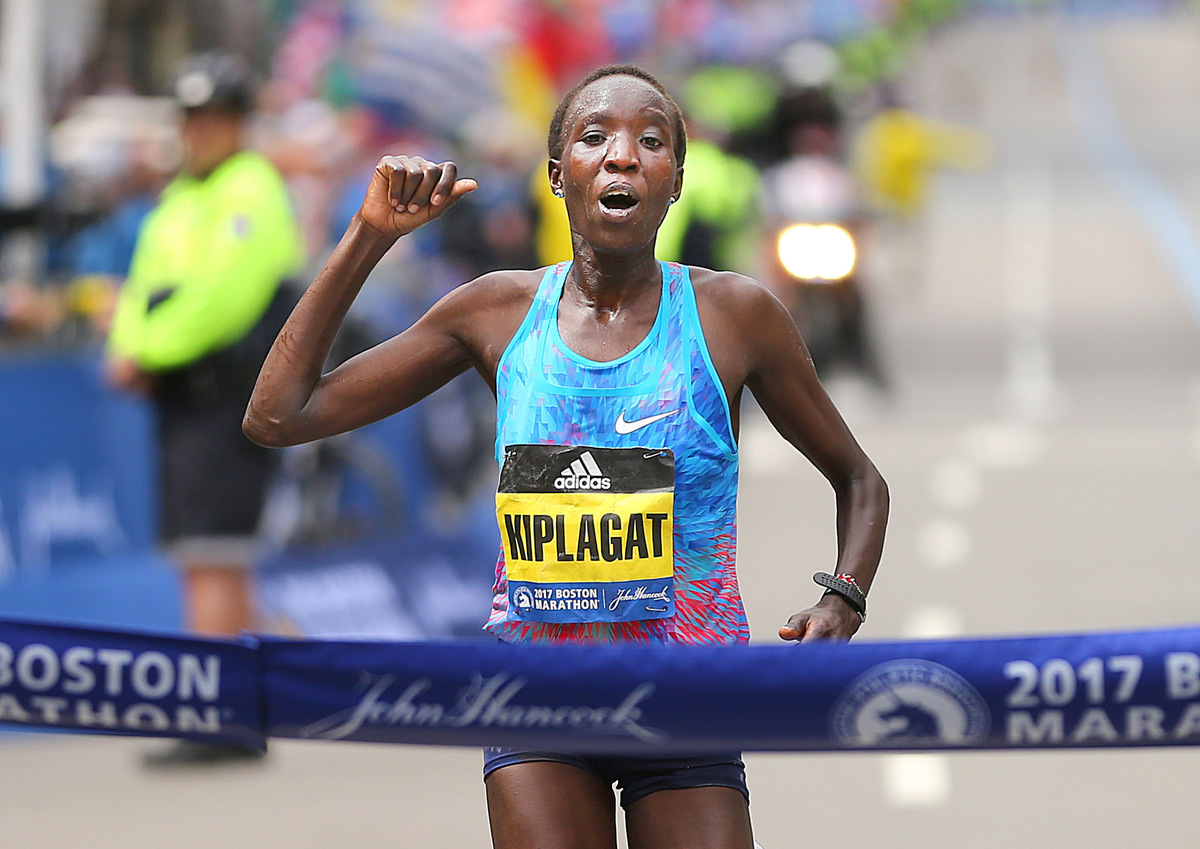 Edna Kiplagat crosses the finish line of the 121st Boston Marathon on April 17. It was her first time running the race.

In her first running of the Boston Marathon, Edna Kiplagat powered across the finish line of the Boston Marathon this month nearly a minute ahead of her closest rival. Kiplagat made the 26.2 mile outing look like a spirited jog in the park. She even clocked a blazingly fast 5:02 minute mile at the 20-mile mark of Boston's storied road race.

And now, as she does after every major race, she's taking two weeks off.

"I'm in my second week of that right now relaxing at home with my husband," she says when reached by phone at her farm outside Eldoret, Kenya, in the western highlands. "In the afternoon, we take our children to play. My son likes golf. And my daughter likes swimming. We take them to the Eldoret Club for two hours, then come home."

Two years ago, Kiplagat and her husband/coach, Gilbert Koech, bought a farm in an area where many of Kenya's top distance runners train.

"We got it from a white guy from South Africa. We bought the land from him and inside there were all these deer," the running champion says. "So we have deer. We also plant wheat and we keep cows and sheep."

Edna Ngeringwony Kiplagat was born not far from her current farm but in much different circumstances.

She was the fourth of 6 children. Her parents were peasant farmers. Last week she took home $150,000 in prize money for winning the Boston Marathon.

Kiplagat crossed the finish line at Boston in a time of 2 hours, 21 minutes and 52 seconds.

The 37-year-old Kiplagat started running road races in secondary school and dedicated herself full-time to running when she was 16. "Yeah, I was still a young girl," she says, adding that running is the only job she's ever had.

After the Boston Marathon several news outlets reported that she's a "Kenyan policewoman" but this was inaccurate. In Kenya, the police along with the military and other institutions sponsor athletes. When she's home she competes for the Kenyan police. Over the course of a two-decade career, Kiplagat has become one of Kenya's best distance runners. She's won the women's marathon at two IAAF World Championships (2011 and 2013). In addition to Boston, she's come in first at marathons in London, New York and Los Angeles. Last year she placed 2nd in Chicago.

She's done this while raising not just her two biological kids but also the two children of her sister, Alice, who died of breast cancer in 2003. She also has adopted another child whose parents passed away.

"It's not hard," she says of balancing being a mother of five and a world-class athlete. "It's about organizing yourself and making sure that everything is done at the right time."

She says training for a marathon is all about planning. Having a husband who's also a runner and her coach allows her family life to merge smoothly with her training.

"The moment we get accepted to a race, we start planning right away," she says. "We have to sit down and draw up the program — when are we going to start, what do we have to do from day 1 to prepare.

"We put down everything that will be needed and we follow it."

On days that she needs to put in 25 miles she runs on a road from the nearby town of Iten — a popular route for Kenyan distance runners who are in training.

"When we are doing long runs we do that route every Saturday," she says. "It's a dirt road. It can be busy with cars, bicycles, motorcycles, people walking."

Winning the Boston marathon, she describes as "special" because of its iconic stature. Her 13-year-old son, Carlos, and her daughter, Wendy, who's 9, embraced her just after she crossed the finish line.

Her husband and coach, Gilbert Koech, however, wasn't there. He couldn't get a visa to enter the U.S.

This was odd on several fronts. First he's the coach of a top athlete for one of the most celebrated sporting events in America. Secondly, Koech had been to the U.S. numerous times before. He spent much of the 2000s flirting with the top tiers of the running world and also toiling in second tier road races to scrape together an income.

Koech's last big win was at the 2009 Rock 'n' Roll San Antonio Marathon where he clocked a blistering time of 2 hours 14 minutes and 39 seconds. But this year he couldn't even get the U.S. embassy in Nairobi to grant him a visa.

"He was told that he's not going to get his visa because he's not allowed to go to America," Kiplagat says. Despite having a letter from officials at John Hancock which sponsors the Boston Marathon, embassy officials told him they had no assurance that he wasn't going to stay in the United States.

"It was a big disappointment for him not to go to Boston," she says.

What Makes The Kids Of Congo Run?

Her religion is very important to her and she says running is a blessing. It's become a central part of her life and given her a lucrative income. But she's quick to add that the Kenyan runners who train near her farm don't view running as a way to escape from poverty. They run, she says, because they love the sport.