Accessibility links
A Mother's Day Tribute To A Tough Love Mama : Goats and Soda She wanted my four siblings and me to work hard. We wanted to play. But as an adult, I'm glad she was the kind of mom she was.

Why I Stopped Getting Mad At My Tough Love Mama

Why I Stopped Getting Mad At My Tough Love Mama 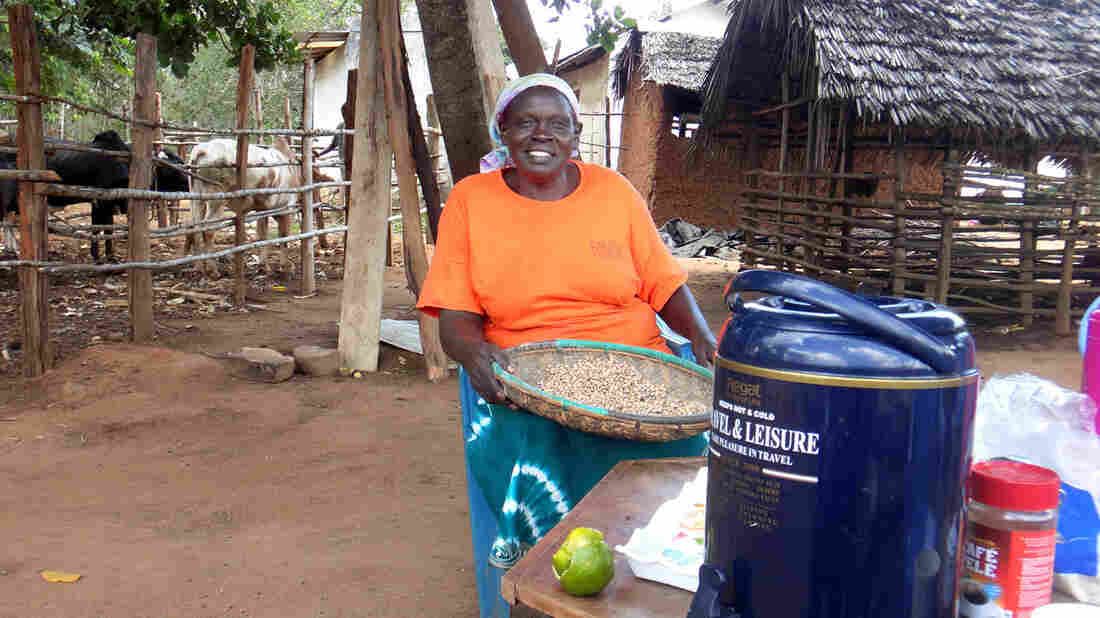 Bertha Ngumbi, mother of five children who are all now grown, at her farm in Kenya. She's sifting through beans to get rid of bad ones and stones. The cows' and goats' houses are behind her. Courtesy Esther Ngumbi hide caption 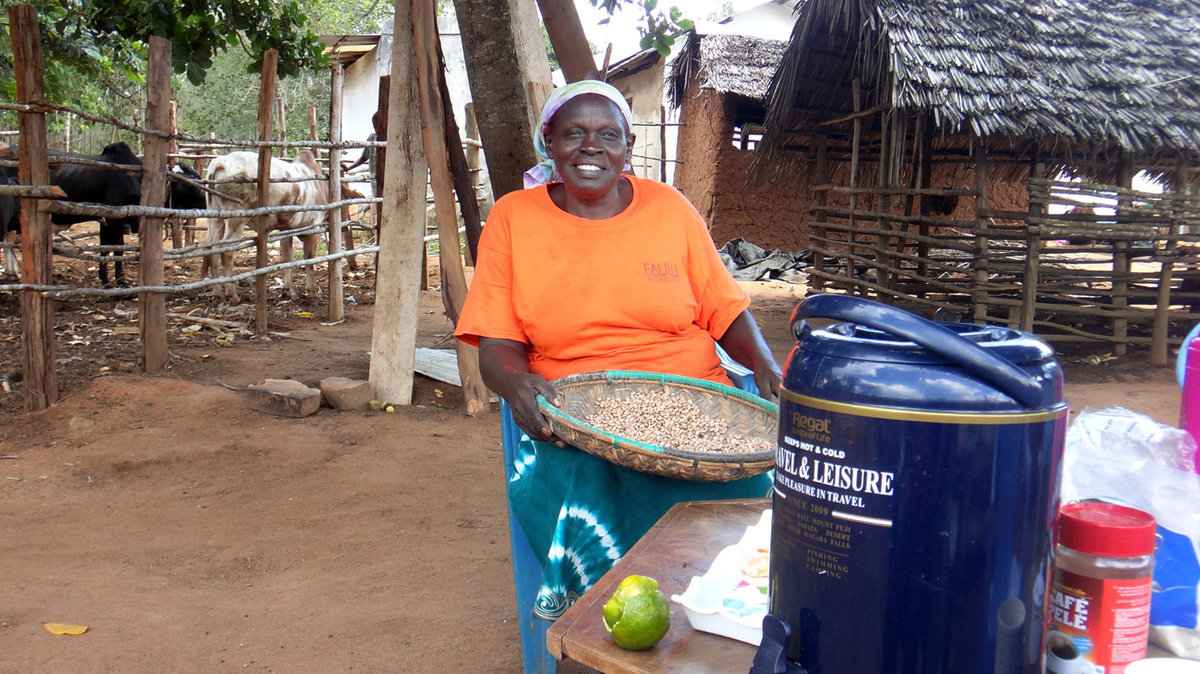 Bertha Ngumbi, mother of five children who are all now grown, at her farm in Kenya. She's sifting through beans to get rid of bad ones and stones. The cows' and goats' houses are behind her.

"I want you to study hard so that you can rescue our family from poverty. Your father and I are poor and the only gift we can give you is an education. You are intelligent. Rise up and make your lives meaningful. I gave birth to you and I know you have what it takes to make it in life. Work hard my children."

When I was a little girl in Kenya, hardly a day would pass without my mother repeating those words to my four siblings and me.

Because I was a child all I wanted to do was play hide and seek and netball. So her words fell on deaf ears. When she told us to work hard, we played harder.

But my mother meant what she said. Anytime we were caught playing and not working hard at homework or chores like washing clothes and fetching firewood, she would punish us. I wish she did it differently.

I still remember one day, when I was about 10, going to the river crying and wishing that she would get sick and lack the strength to punish me. I was very mad at her.

As we children grew up, we slowly grasped the wisdom in her words mostly because she led by example and lived by her words every day.

Bertha Ngumbi, my dear mother, is one of the most hardworking women I can think of. She and my dad, Harrison, were both teachers and managed to raise us on their combined salary of $200 a month.

And because her teacher's salary was not enough we had to farm. So before going to school, my mother would wake up all of us at 5 a.m. to do farm chores. Come evening, we'd help my mother by going to the river about 15 minutes away to fetch water for drinking and bathing and by cooking dinner. After dinner, she would do her teaching preparation while we did our homework and reviewed our school notes.

My mother wasn't just tough. She was selfless. She sacrificed life's little pleasures so we could go to school and get an education. I still remember vividly how she and my dad would go to collect their paychecks but eat nothing before coming back in the evening, hungry and tired. I wondered at her ability to be in town, in the midst of all the best foods but choosing not to buy anything so she had enough money for our school fees.

That determination and selflessness had a powerful effect on my siblings and me. Even though we grumbled, it inspired us to work hard and pursue our life's goal no matter the challenges, hurdles and circumstances. 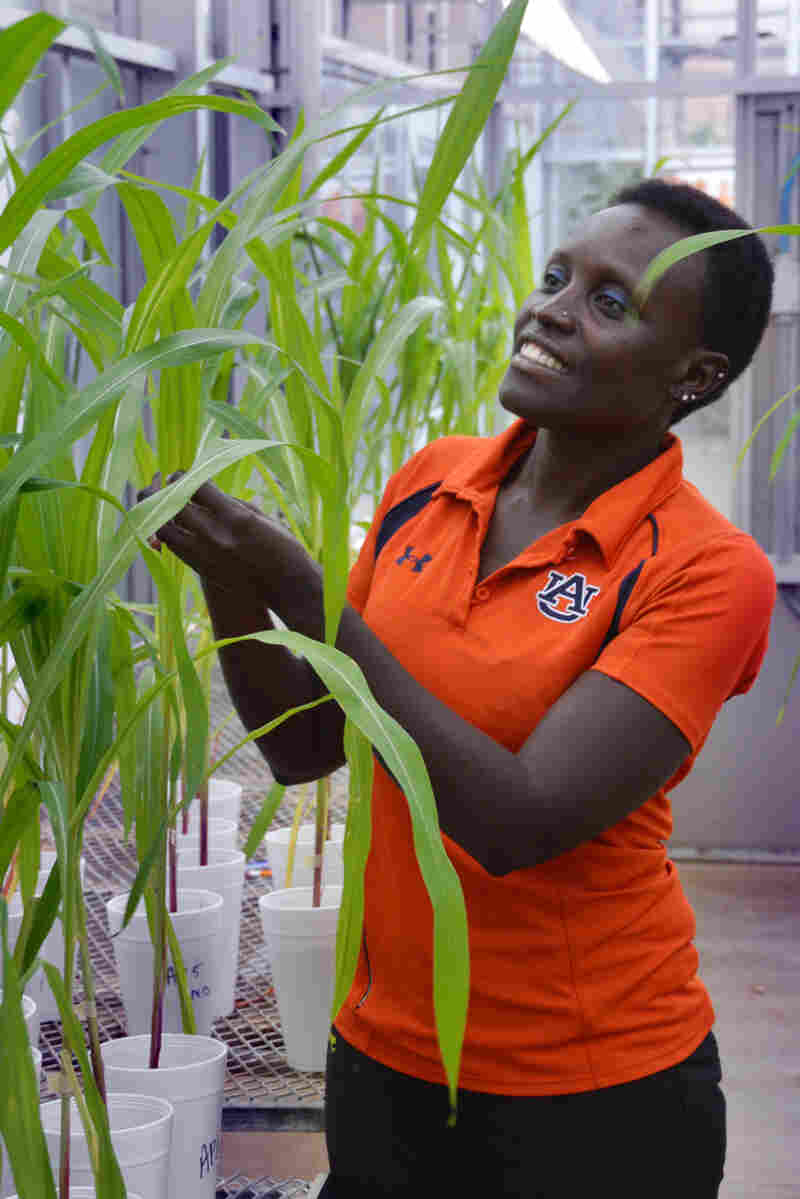 Esther Ngumbi's mother urged her to do well in school. She was the first girl from her village to earn a Ph.D. (in entomology) and now does postdoctoral research on plant pathology at Auburn University. Above, she's inspecting some corn plants treated with rhizobacteria to promote growth. Courtesy Esther Ngumbi hide caption

Now that I am grown, I appreciate the values and standards my mother instilled in her children.. If it were not for her words and tough stance, I would never have graduated from Auburn University with a Ph.D. in entomology. I would never have become the first girl from our community of Mabafweni in Kwale County to get a doctoral degree.

When I think back to my childhood, I can understand why she was so hard on us. But I've always wondered how she felt? Did she know we were mad at her for being so tough? Mama, why did you set the bar for us up so high? Why did you punish us so much? Why were you so insistent on us working hard in our early years? Why did you never give up on us?

So I had a conversation with her this week. Here's what I asked – and here's what she said.

Why were you so hard on us?

My children thought I was mad when I told them what I wanted them to become. They could not believe they possessed the capacity to achieve the standards I had set. But because I was their mother, I could see their potential. I pushed them hard so that they would make it in life. I watched them closely and monitored their performances in school and had the time to discuss their progress with their teachers. As they grew up and started to understand, I became their friend and this helped because they were free to discuss their problems with me.

Did you know your children were mad at you for setting high standards?

No, I did not know they were mad. Deep down I knew everything I was doing was best for them in the long run.

Were you ever tempted to give in and be a "fun" mom?

I stuck to my standards because I saw the potential in each of my children and I had to exploit that.

What was the biggest sacrifice you made?

I sacrificed my social life, money and time. But I would do it all over again.

What advice do you have for moms today who are in the position you were in – facing poverty, trying to make sure their kids have enough to eat and can get an education and have a better life?

How could you collect a paycheck and come home, tired and hungry, without stopping to get something to eat? Did you ever just want to go crazy and buy some food you loved and sneak eat it?

No. I did not want to sneak eat because I had a mission to accomplish.

Was there any role model or any wise advice or saying that helped you?

My mother was my role model. I had seen my mother struggle. I therefore wanted to set the bar up high for my children. I wanted them to accomplish their life goals.

What's the toughest thing about being a mom?

The toughest thing was make my children understand that whatever I was doing was for them and was out of a mother's wish for her children to succeed in life.

I didn't have to ask my mother if she is happy with how all her children turned out. I know she is very happy.

Her eldest son, Kennedy, is a businessman, farmer and entrepreneur. I'm her second born and I'm a scientist. Her third born, Faith, is a counselor. Her fourth born, Kalekye, is a manager and consultant in a health-care NGO. And her last born, Kavuu, is a nurse. All her efforts, sacrifices and selflessness paid off.

Today, my mother and I continue to share a beautiful relationship. Week after week, in our phone conversations, she urges me to work hard. Just as she did when I was a child, she constantly urges me to rise up and make the most out of the opportunities that I have. She jokingly always reminds me of how far we have come, the sacrifices she made for my siblings and me — and how happy she is that we all succeeded.

Ending on a happy note, she always urges me to reach for the stars.

I am forever grateful to my mother and I love her from the bottom of my heart.

Esther Ngumbi is a post-doctoral researcher at Auburn University in Alabama. She serves as a 2017 Clinton Global Initiative University Mentor for Agriculture, and is a 2015 Food Security New Voices Fellow at the Aspen Institute. Reach her @EstherNgumbi