Accessibility links
Should America Keep Giving Billions Of Dollars To Countries In Need? : Goats and Soda The matter of foreign aid has taken on renewed urgency in the Trump administration. And it turns out it isn't easy to figure out whether it's effective. 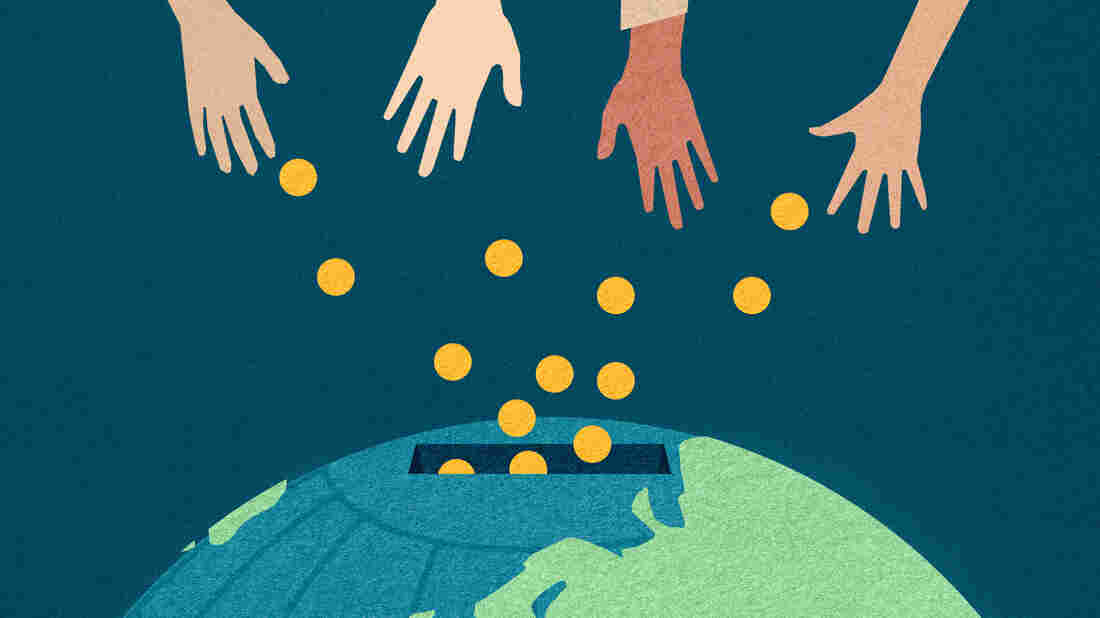 Each year, the United States sends billions of dollars to poor countries. Does it really help them grow?

But it's taken on renewed urgency in the Trump administration. Last month, NPR's David Greene asked Stephen Moore, who advised Trump's campaign on economic policy, whether he supports the idea of cutting the U.S. foreign aid budget. His response: "100 percent."

"There's zero evidence that any of these foreign aid programs have had any effect on development, whether it's in the Middle East or Africa or South America," said Moore, who is a fellow at the Heritage Foundation, a conservative think tank. "And there's just zero evidence that any of that development aid has had any effect on raising the living standards."

"It's an extremely difficult question to answer," says Rachel Glennerster, executive director of the Abdul Latif Jameel Poverty Action Lab at the Massachusetts Institute of Technology. Her group uses scientific research to test and improve programs that address the needs of the poor. "If you can break it down, you can start answering it."

So let's break it down.

Does Moore have a point?

The first challenge is to defining "development." In a broad sense, it means economic growth — increasing the size of a country's economy over time.

For Moore, it's clear what leads to economic growth — and it's not foreign aid. "All these countries have to do is cut taxes, provide private property rights and get involved in global markets," he told NPR in a follow-up interview. He cites as evidence the Heritage Foundation's Freedom Index, which asserts that the less control a government exerts over its economy, the higher its citizens' incomes are.

It's a bit more complicated than that, suggests Charles Kenny, a senior fellow at the Center for Global Development, a think tank that focuses on poverty and inequality around the world. "The short answer is, we don't know what causes economic growth," he says. "Development economists have gone through loads of different theories."

Where does foreign aid go? It gets invested in roads and factories. It funds improvements in health and education, with the goal of creating a strong workforce, and ultimately toward growing a country's economy. But still, Kenny says, "we don't know. And if we don't know what causes growth, what the role is for aid is hard to answer."

In any case, foreign aid accounts for just a tiny percentage of low- and middle-income countries' income — about 0.6 percent, according to the World Bank. "Aid just isn't that big anymore in terms of its size in recipient economies," says Kenny. "So you wouldn't expect it to have a big impact on economic growth."

Nonetheless, researchers have tried for decades to connect the dots between aid and growth, says Glennerster of the poverty lab at MIT. But results have been mixed. "I can show you 40 papers that have appeared in economic journals in the last 10 to 15 years saying that there's been no relationship," says Kenny. "Twice the number that say there is. Some say it's a mix. All those stories are plausible."

One 2007 paper, for example, titled "The Aid Effectiveness Literature: The Sad Results of 40 Years of Research" looked at 100 studies and found that aid has not boosted economic growth. In some cases, countries receiving aid did show positive growth, but it was "small and of dubious significance," found the researchers, Hristos Doucouliagos and Martin Paldam. When they reanalyzed the literature in 2014, they reached the same conclusion.

Other studies have a rosier view. A 2015 paper published in the World Bank Economic Review looked at countries that receive foreign aid equivalent to 10 percent of their gross domestic product — the goods and services produced over a specific period of time. The paper found a bump in economic growth by one percentage point. That might sound trivial, but it's not — especially for developing countries that grow about 3 to 4 percent a year, according to Steve Radelet, a senior fellow at the Brookings Institution.

Opening the black box of aid

Then there's the question of what aid is supposed to do. Not all foreign aid is intended to boost income and GDP. "When people look at aid they just mash everything together," says Krishna Dipankar Rao, a professor at Johns Hopkins University's Bloomberg School of Public Health.

There are many types of aid. Take the U.S., for example. Last year, we spent $33 billion on foreign aid, money that we gave to 100 countries around the world for a variety of projects. Sometimes the aim is to spur development, like offering low-cost tractors to boost agricultural productivity in Nepal. Sometimes it's to promote peace, like encouraging young people in Kyrgyzstan to vote. Sometimes it's to save lives: providing humanitarian relief in post-earthquake Haiti.

Once you break open the black box of aid, it's easier to find out whether a project has made a difference in a country's well-being. "What is it that you're trying to measure?" says Neil Boothby, a professor at Columbia University's Mailman School of Public Health and a former special adviser on children's issues at USAID. "Are you looking to reduce poverty? Mortality? Develop robust health systems?"

How Do You Know If Aid Really Works? Turns Out ... We Often Don't

For a long time, those kinds of questions were left unanswered. The folks who allocate development aid did what made sense to them and didn't conduct studies to back it up, reported NPR's Nurith Aizenman in January 2017.

That's no longer the case, Aizenman found. Since the early 2000s, social science researchers have been pushing policymakers to evaluate the impact of their programs. Many groups have begun using randomized controlled trials, a rigorous evaluation method often used in the fields of science and medicine, to design health and development programs. They compare one group of people that got aid with another group that didn't and see whether the aid helped.

Even the U.S. government has hopped on the train. In 2011, USAID established an evaluation policy to make evidence-based decisions about future aid programming. USAID has commissioned more than 1,000 evaluations since the policy was enforced.

Can health lead to wealth?

So now let's go back to Moore's statement. Can we really say that there's "zero evidence" that U.S. foreign aid has had an impact on development?

"That's false," says Amanda Glassman, chief operating officer at the Center for Global Development. If we interpret "development" to mean an improvement in overall well-being, then "there's plenty of evidence that shows aid has worked" — including aid from the U.S., she says.

The only problem is that the evidence is often in the realm of education and health. The President's Malaria Initiative, for example, has protected 6 million from the mosquito-borne disease since 2000. A vitamin A program in Nepal halved the mortality rate for children under 5 in just five years. And two education projects in Burkina Faso and Niger helped boost school enrollment and test scores, especially for girls.

Asked about these successes in a follow-up interview with NPR, Moore had this to say: "Global health programs can increase life expectancy or decrease child mortality, but ultimately, people want a higher standard of living."

Aid researchers often argue that health is wealth. "In the end, I don't think you can separate one from the other," says Boothby from Columbia.

Glassman, who co-wrote a book called Millions Saved that evaluates the effectiveness of global health initiatives, shares a case study. About two decades ago, Botswana was going through an HIV/AIDS crisis. In 2001, nearly 20 percent of the population — about 320,000 people — were living with HIV. "We are threatened with extinction," said President Festus Mogae to the U.N. General Assembly that year.

The health emergency also threatened to derail the economic progress that the country had enjoyed since discovering diamonds in the 1960s. The disease decimated the workforce, from farmers to teachers to civic leaders. Health care costs were racking up, according to the World Health Organization. Mogae declared his battle cry: "Ntwa e bolotse." ("The war has started.")

In 2012, NPR's Jason Beaubien met some of the people who benefited from the program, including a farmer named Johane Setlhare, who started taking antiretroviral drugs in 2007.

"I would have been dead nowadays if I hadn't taken the treatment," he told Beaubien.

Just two years after Selthare began taking his daily medication, he had built himself a new house with his own hands. Working on the roof and making the bricks for the walls, he was surprised at his strength.

Researchers are split on the issue. Where do you stand? Submit your perspective in the tool below. Try to keep it under 100 words. We'll feature some of the comments on Goats and Soda in a special #CuriousGoat post next week. If you select "anonymous" we will not publish your comment in our roundup.

Our submission deadline has passed. Thanks for participating! Read a selection of our reader responses here.

In a previous version of this story, we incorrectly said that foreign aid accounts for approximately 0.3 percent on average of the government budget of developing countries. It's actually 0.6 percent of the national income of those countries.