Accessibility links
Trump's Restrictions For Abortion Funding Overseas Could Hinder HIV Prevention : Goats and Soda Foreign aid restrictions introduced by President Ronald Reagan in 1984 have been expanded by the Trump administration. They could hinder HIV prevention and the fight against infectious disease. 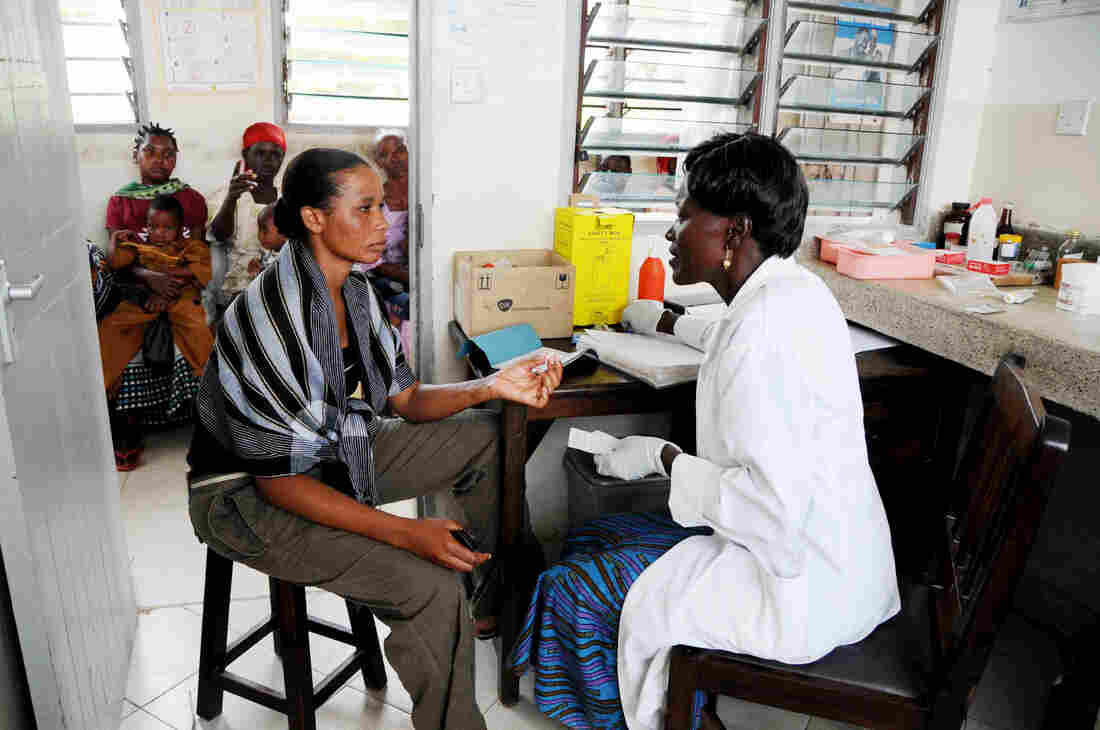 A patient is tested for malaria at a clinic in Kenya. U.S. funding for antimalarial efforts, HIV prevention and other programs abroad could be affected by the newly expanded "Mexico City policy." Wendy Stone/Corbis via Getty Images hide caption 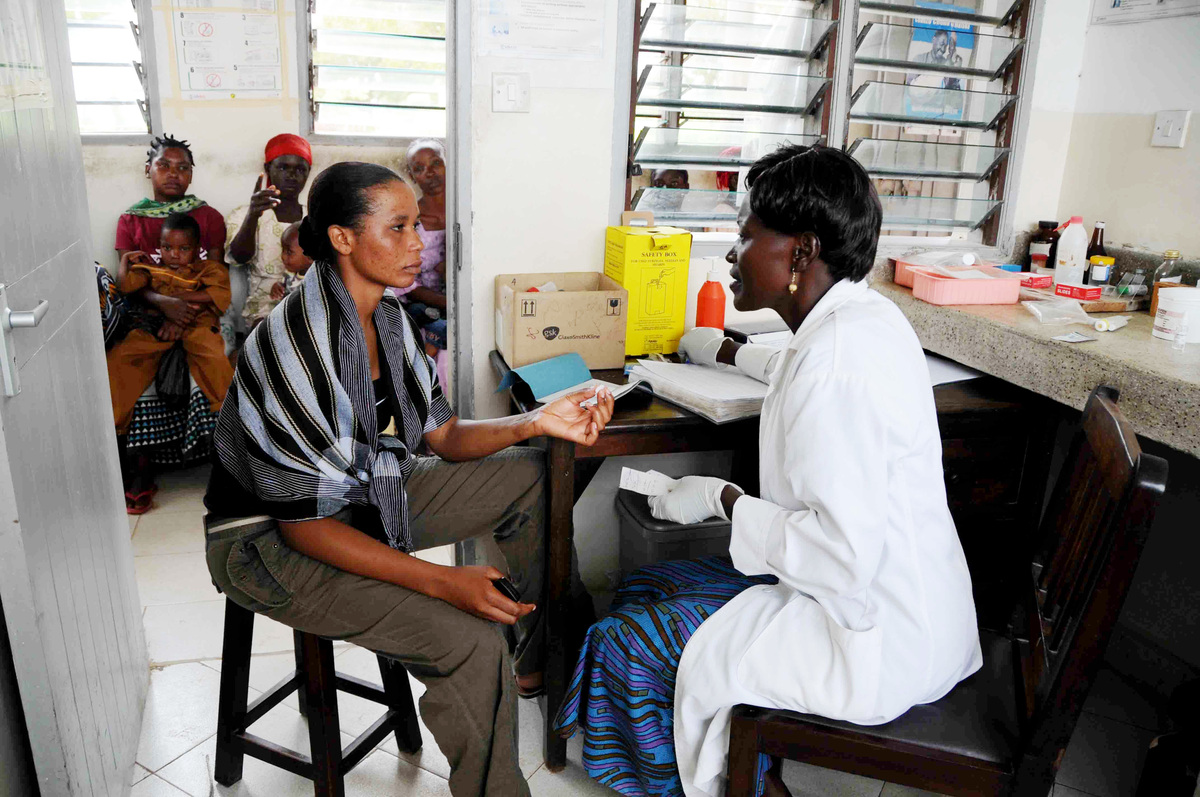 A patient is tested for malaria at a clinic in Kenya. U.S. funding for antimalarial efforts, HIV prevention and other programs abroad could be affected by the newly expanded "Mexico City policy."

The newly-released details of the Trump administration's version of the "Mexico City policy" are raising many questions about its impact not only on abortion but also on preventing HIV and infectious diseases like malaria.

The policy is named for the place where it was introduced by President Ronald Reagan, at a U.N. conference, in 1984. The aim was to cut off U.S. funding to nongovernmental organizations that "perform or actively promote abortion as a method of family planning."

President Barack Obama had revoked the rule (as did President Bill Clinton). But President Trump has reinstated and renamed it (the Protecting Life in Global Health Assistance plan). And on Monday, he gave details on its newly expanded scope.

Previously, only federally funded family planning organizations were affected. Now the restrictions apply to any nongovernmental group receiving funds provided by the State Department, the U.S. Agency for International Development and the Department of Defense. So the plan would apply to the President's Emergency Plan for AIDS Relief, or PEPFAR, which funds HIV prevention and treatment in nearly 60 countries, and the President's Malaria Initiative.

The amount of U.S. funds now covered are nearly $9 billion compared with $600 million in earlier iterations.

"It has a bigger reach than it's ever had before, and many of the organizations that could now be affected have never confronted it before," says Jennifer Kates, director of global health and HIV policy at the Henry J. Kaiser Family Foundation.

The impact will be felt in communities where one stand-alone clinic addresses a wide span of health needs. The local reproductive health clinic could receive PEPFAR funding for a program to prevent HIV transmission or U.S. funding to provide bed nets to ward off malaria-carrying mosquitoes. If that clinic provides or promotes abortion, then all of those U.S. funds would now be cut.

There are strong reactions to the policy from anti-abortion groups and from supporters of abortion rights.

Some research has shown that when the Mexico City policy is in force, abortion rates can rise. One study by Stanford University researchers, published by the Bulletin of the World Health Organization in 2011, found that abortions in sub-Saharan African countries held steady at about 10 per 100,000 women every year from 1994 to 2000 during the Clinton administration, which did not enforce the policy. President George W. Bush reinstated the Mexico City policy in 2001, and from 2001 to 2008, there were 14.5 abortions per 100,000 women every year.

The study authors note that it's not possible to be completely certain about the reason for the rise. But they theorize that when women lose access to modern contraceptives like birth control pills because the clinics that provided them had shut down because of a loss of funds, some of the women may turn to unsafe abortions. In 2008, 47,000 women died from complications after unsafe abortions, according the World Health Organization.

The Trump version of the rule does allow referrals for abortions in some limited cases, such as pregnancies resulting from rape or incest and when the mother's physical health is at risk. But many NGOs that want to comply with the new policy will likely avoid all discussion of abortion lest funding be jeopardized, predicts Brian Dixon, vice president for media and government relations at Population Connection Action Fund. That is what happened during the previous iteration of the rule, Dixon says: "One of the problems with this policy is the chill it imposes" on any discussion of abortion.

Health specialists who are opposed to abortion rights are in favor of the change. "We're making a clear statement here that we do not want any [U.S. taxpayer dollars] going for abortions overseas and that the global health assistance fund should go to actual health [care], not abortion," says Arina Grossu, director of the Center for Human Dignity at the Family Research Council.

"Children shouldn't have to pay with their lives for the poverty of their parents," says Deirdre McQuade, a spokeswoman for the U.S. Conference of Catholic Bishops. "Abortion's not the answer, addressing basic needs is." She believes funding for proper nutrition and sanitation should be priorities to help mothers in low-income countries take care of their children.

The new rule went into effect earlier this week. Any new U.S. government grant for an NGO health program will need to comply with the rules on abortion restrictions. Groups operating with an existing grant from U.S. government sources won't need to comply until their contract is up for renewal or if they apply for additional funding.

It's difficult to assess the full impact of the expanded Protecting Life in Global Health Assistance plan, partly because it's unclear whether other donors like the Bill & Melinda Gates Foundation (which is a funder of NPR) will fill any gaps that occur because of the new policy. It's also not clear how many NGOs will comply with the new policy and how many will refuse to do so. But a Kaiser Family Health Foundation report looking at countries that got U.S. federal funding in 2016 notes that 37 countries allowed abortions in at least one circumstance that would violate the Mexico City policy.

Dixon knows one agency in Kenya that won't comply. Family Health Options Kenya runs more than a dozen reproductive health clinics that provide family planning and HIV prevention services. Some of the clinics serve the poorest neighborhoods in Nairobi. Family Health Options Kenya expects to lose about 60 percent of its total funding and is planning to close about half of its clinics to absorb the cuts, according to a fact sheet that the nonprofit prepared this year.

The State Department plans to track the impact of the policy over the first six months of its rollout. For a program like PEPFAR, the goal is to determine whether the new restrictions disrupt HIV prevention and treatment. The State Department is prepared to offer waivers to NGOs in regions with no other providers of HIV services. "It would have to be a data-driven discussion to really make that case," says a senior State Department official familiar with PEPFAR who requested anonymity.

"I think that [the waiver is] an attempt to placate those who are very concerned about this policy," says Scott Evertz, former director of the White House Office of National AIDS Policy during the Bush administration. He expressed concerns about what metrics would be used to track whether a waiver was necessary and which staffers within the State Department would carry out this evaluation. "I know there are a lot of smart people in the federal government, but I don't think that's been thought through at all."

"I'm proudly pro-life," Evertz states. "I don't like the idea of abortion and terminating pregnancy to be the solution to an unwanted or unplanned pregnancy. However, all that said, I have no doubt that this policy will result in the unnecessary deaths [from HIV] of individuals that were living as a result of the assistance that we were providing."