Accessibility links
Worms Are The Newest Workers In The Creation Of Traditional Indian Textile : Goats and Soda After the craftspeople of Ajrakphur dye fabrics with a traditional block printing method, there's a lot of toxic waste water. Enter the earthworms. 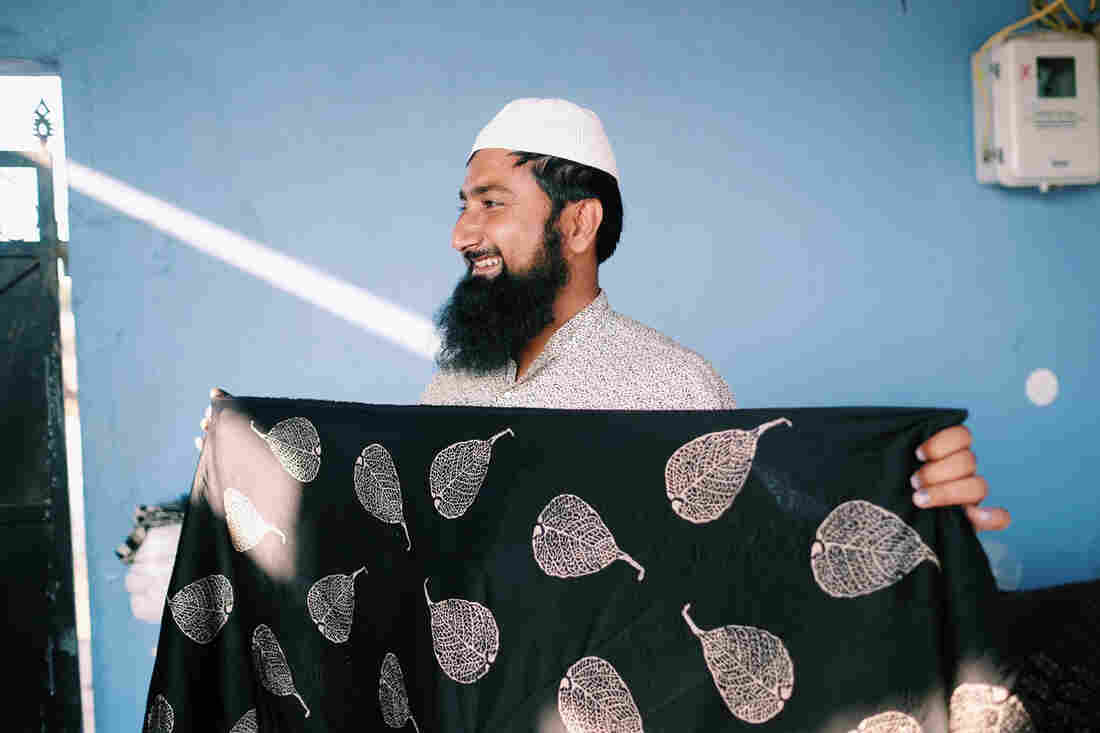 Sufiyan Khatri learned to make the dyes for the block-print textiles from his grandfather. But he likes to experiment with color and design: "Whenever I get the time, I do some innovation in our work." Shaina Shealy hide caption 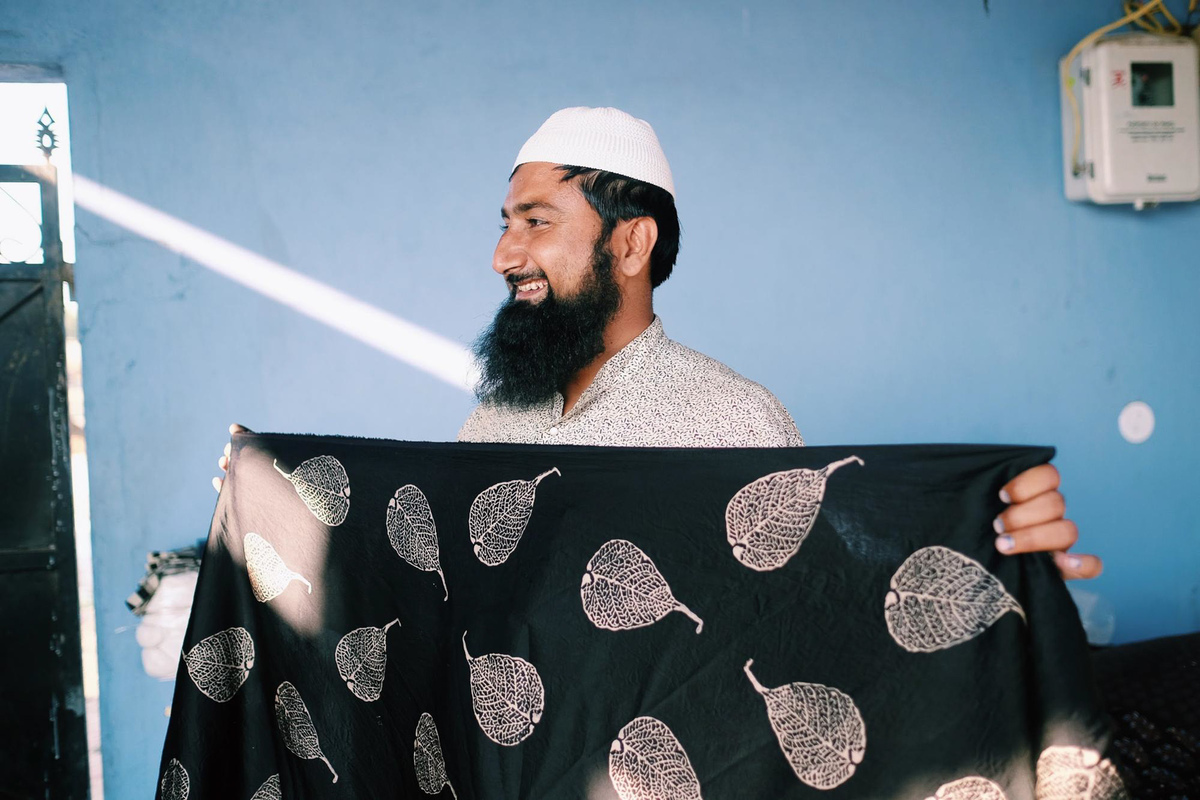 Sufiyan Khatri learned to make the dyes for the block-print textiles from his grandfather. But he likes to experiment with color and design: "Whenever I get the time, I do some innovation in our work."

In the northwest Indian village of Ajrakhpur, 37-year-old Sufiyan ­Khatri stirs several stinky vats: one of bubbling indigo, another simmering pomegranate skins and a third containing a black, gummy brew of rusty bicycle parts fermenting with sugar cane. The mixtures are used to dye textiles with a traditional block-print method called ajrakh.

Khatri, who learned the craft from his grandfather, shares his last name with many Muslim textile artisans in the region who brought their craft to India from Sindh in Pakistan. Khatri means "one who fills with color." He is one of more than 50 artisans in the village producing the textiles as a main source of income. 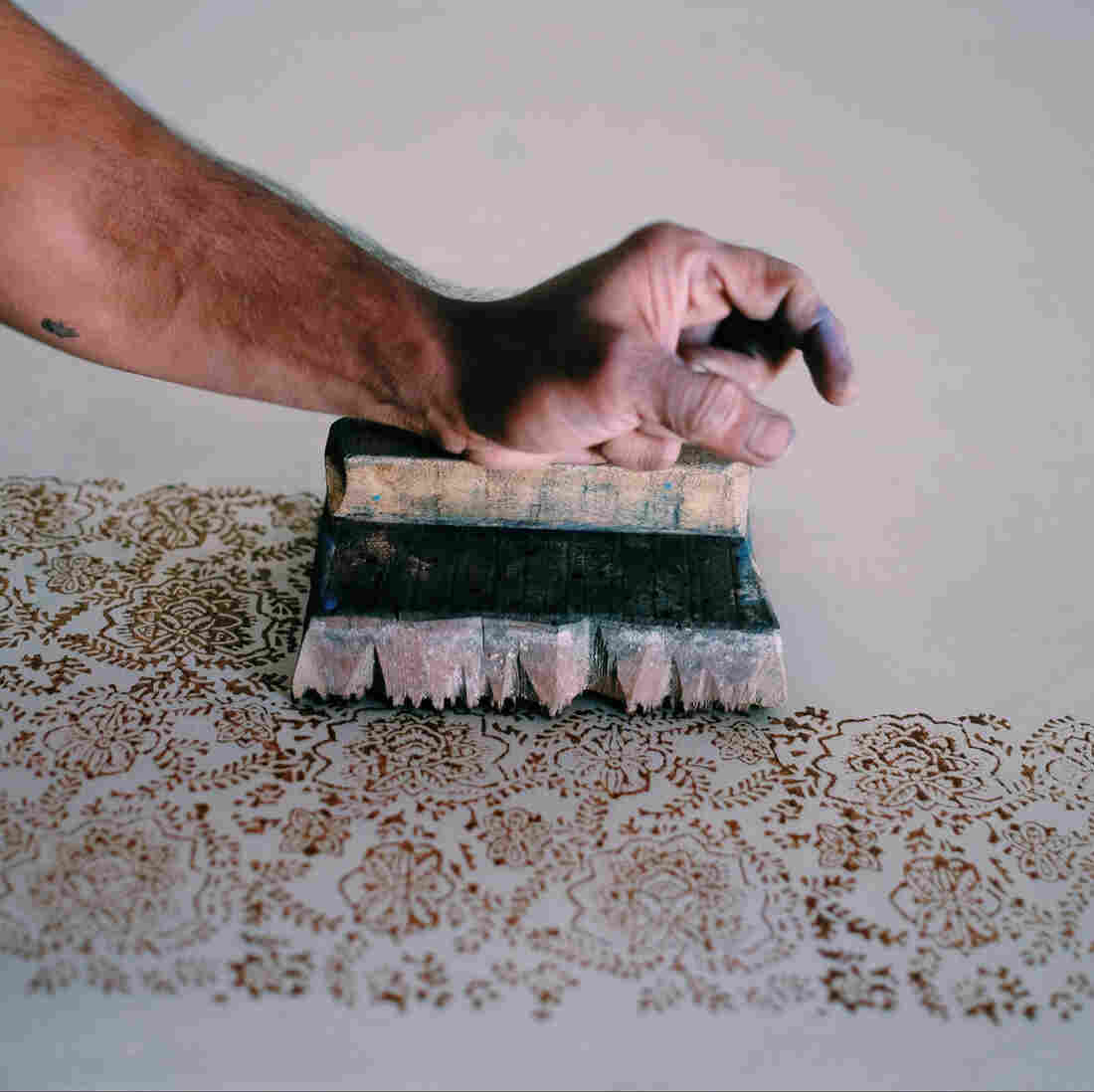 Hand-carved wooden blocks are used to make the prints on the textiles. Some of the blocks are over 200 years old. They're retired when edges turn rough or become uneven. Shaina Shealy hide caption

And he's been pleased to have welcomed some new assistants: earthworms.

Their job is to deal with toxic materials in the dyes that are not only bad for the environment but also make it impossible to reuse the wastewater for the next round of dyeing.

Thousands of the wiggly creatures live inside a water filter — called a "vermifilter." That's the term for a treatment system that cleans dye-tainted water. It was installed last May with support from the nongovernmental organization KHAMIR — Kutch Heritage, Art, Music, Information and Resources. The group connects the artisans of the Kutch district with outside resources and markets. 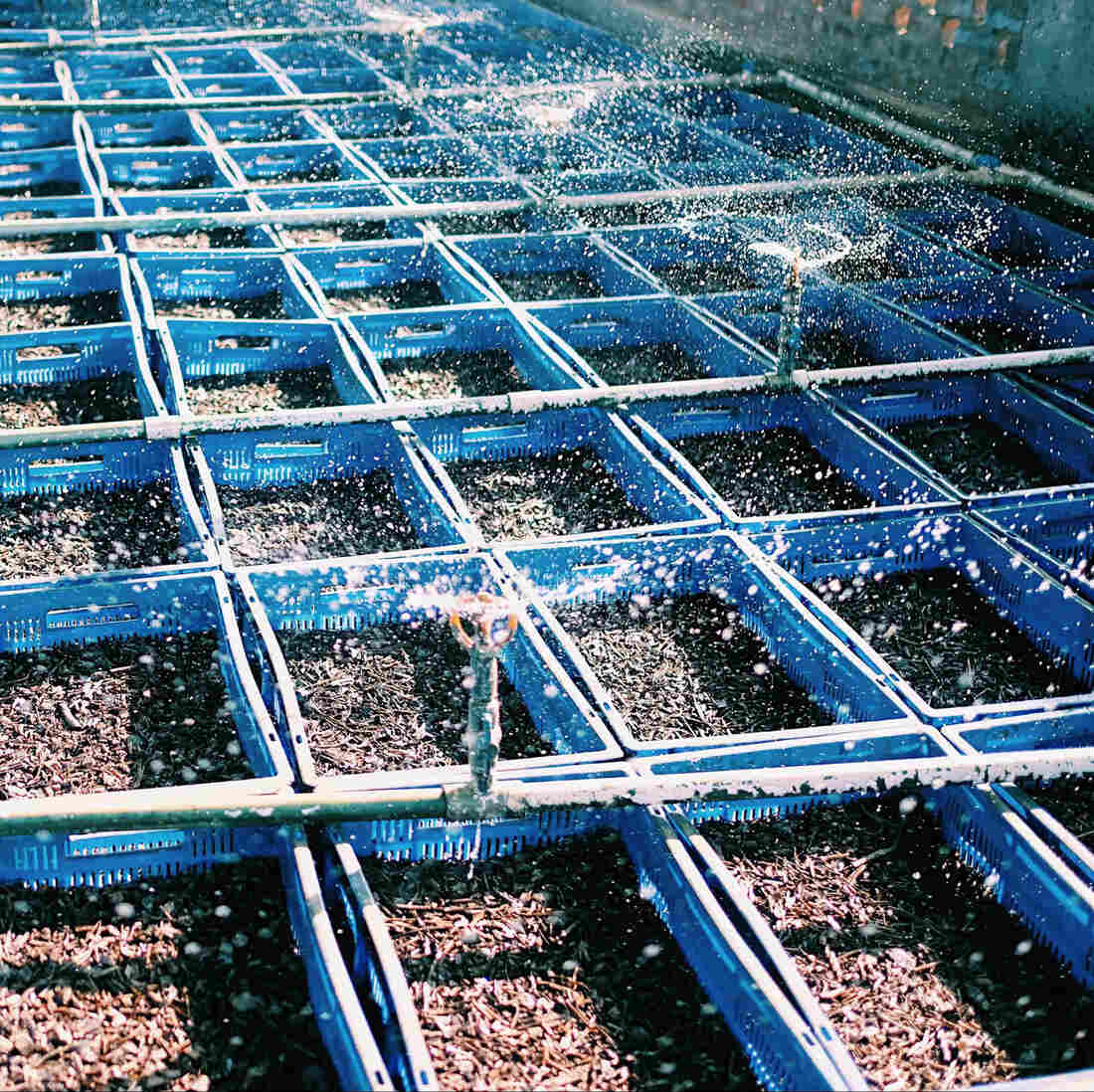 The earthworms live in a biofilter where they treat wastewater from the dyeing process to remove toxins and dyes. Shaina Shealy hide caption

The filter is a few feet from Khatri's studio. It is constructed out of dozens of bright blue plastic crates packed with organic materials including cotton roots, dirt and all of those earthworms. Sprinklers spray murky blue water from attached tanks into the crates. The water trickles through the dirt. The worms feed on toxic dyes in the wastewater and excrete "wormcasts" that are not toxic. The water is filtered through the worm poop, the cotton roots and other materials and comes out a pale yellow — and clean enough to reuse in the textile process.

The ability to reuse water is critical for the village, which consumes over 52,000 gallons of water every day to maintain an annual output of over almost 460,000 square feet of hand-printed cloth. Each piece is washed at least three times in community water tanks. And the artisans say they create colors by "playing with water" — adding varying amounts of ingredients like pomegranate skins and then bringing the mixture to a boil.

Hundreds of years ago, Ajrakh artisans had plenty of water to play with. But ground water in northwest India is increasingly depleted due to overuse, Ajrakhpur's artisans are concerned about the future of their craft. "If we don't get water," Khatri says, "We stop our work."

Signs that something is amiss are already visible on Khatri's textiles. As water levels decrease, minerals in it like iron become more concentrated, which can leave dark spots on prints after the artisans wash them. And there are more serious problems: The release of dyes into the environment is a main source of water pollution. Khatri prides himself on using natural dyes, but many artisans use water tainted by synthetic dyes — and dispose of it in open drains. 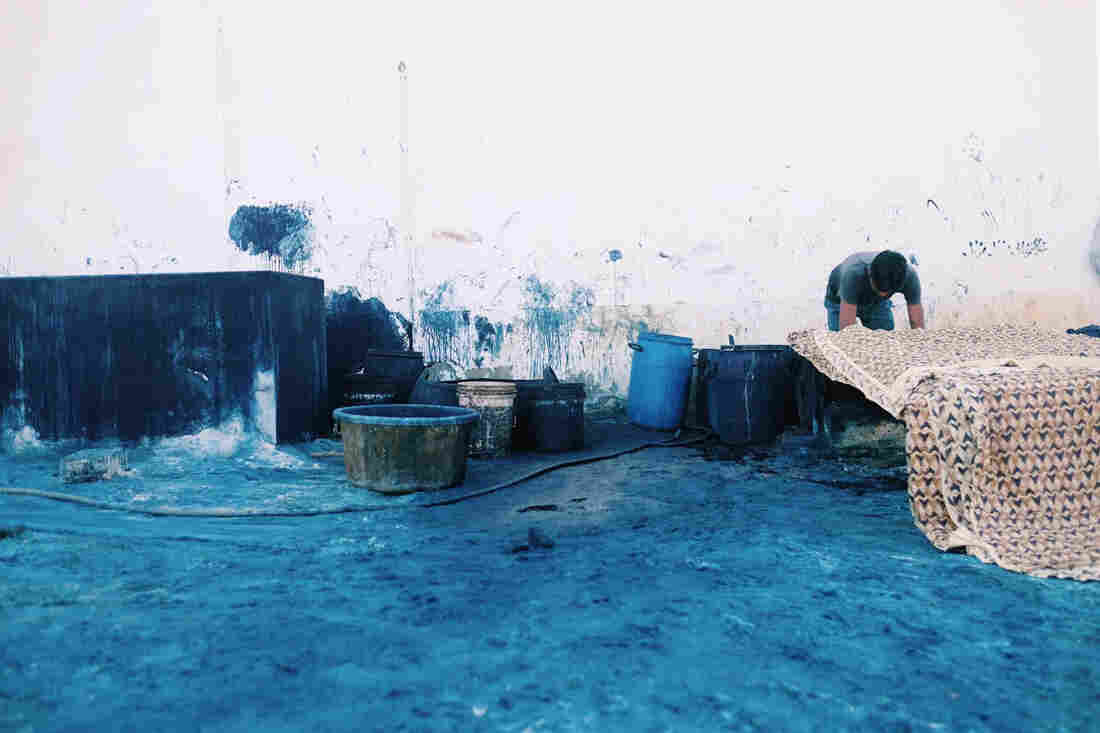 Wasseem Abbas dips cloth printed with mud into a vat of fermented indigo. After it dries, the cloth will be washed several times. If the water used for the washing has a high iron content, dark spots appear on the textiles. Shaina Shealy hide caption

Khatri says artisans appreciate that the worms have already cut their water costs. But the output of the filter — about 13,500 gallons per day— is far from what they need to meet a growing demand for their textiles. The Indian government has approved a grant funded by India's Ministry of Textiles to build a vermifilter in Ajrakhpur three times the size of the current one. It will be completed in the next two years.

And it may pave the way for more worms in India and around the world. Vermifiltration technology was first made available in Chile in the 1990s. The largest systems are in South America, where they are predominantly used for treating industrial wastewater, according to Kevin Jeffery, managing director of Wastewater Wizard Limited. He calls vermifiltration "a revolutionary approach to wastewater treatment."

There are limitations, says professor Ralf Otterpohl, director of the Institute of Wastewater Management and Water Protection at Hamburg University of Technology. One of the biggest challenges is that the worms need warm soil temperatures to thrive. Plus, he adds, this type of technology is most suitable for small-scale production.

That still leaves plenty of opportunity for Transchem Agritech, the enterprising Indian company that installed the vermifilter in Ajrakhpur. The company has vermifilters across India's dairy, sugar and chemical industries. The one in Ajrakhpur is the first in the handicraft industry, so developing the right environment for the worms — with the right mix of materials so they could help minimize the dyes in the water — required some tinkering. 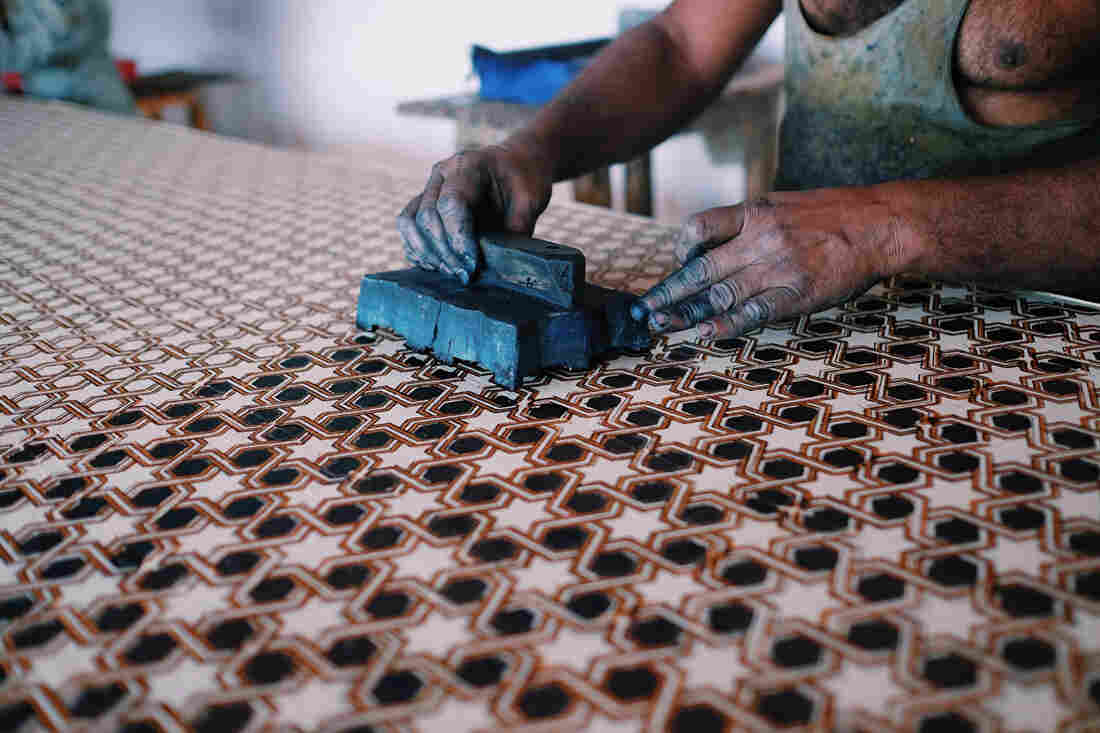 The nail beds of the artisans of Ajrakhpur are stained deep blue with natural indigo. Shaina Shealy hide caption

This innovation seems fitting given Khatri's latest work. Traditionally, ajrakh textiles functioned as men's shoulder cloths and doubled as spice sacks and prayer mats. In keeping with Islamic tradition, the designs never depict human or animal figures. But Khatri wants to keep his craft relevant for a contemporary market. In a recent show at Lakme Fashion Week, supermodels wore his bold, geometric prints on short skirts and dresses.

As Khatri says: "We have to be creative to continue."

Shaina Shealy is an American journalist living in Jerusalem. Her work focuses on religion, community development and women's health. Find her on Twitter @shainashealy.