Accessibility links
Internally Displaced Persons Outnumber Refugees But Don't Often Make Headlines : Goats and Soda The world is riveted by the ongoing refugee crisis. Less so by the ongoing — and much larger — internally displaced persons crisis. 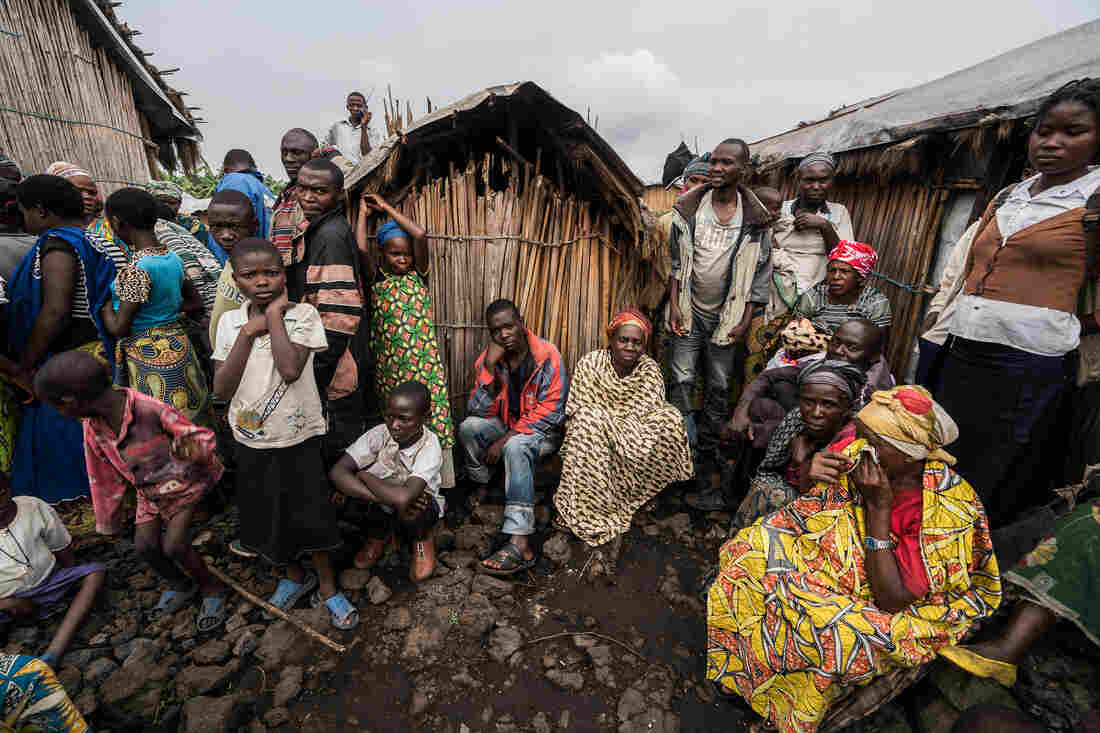 The camp at Mungote is one of the largest for internally displaced persons in the Democratic Republic of Congo, with over 12,000 residents who fled their homes due to ongoing conflict and violence. Giles Clarke/Getty Images hide caption 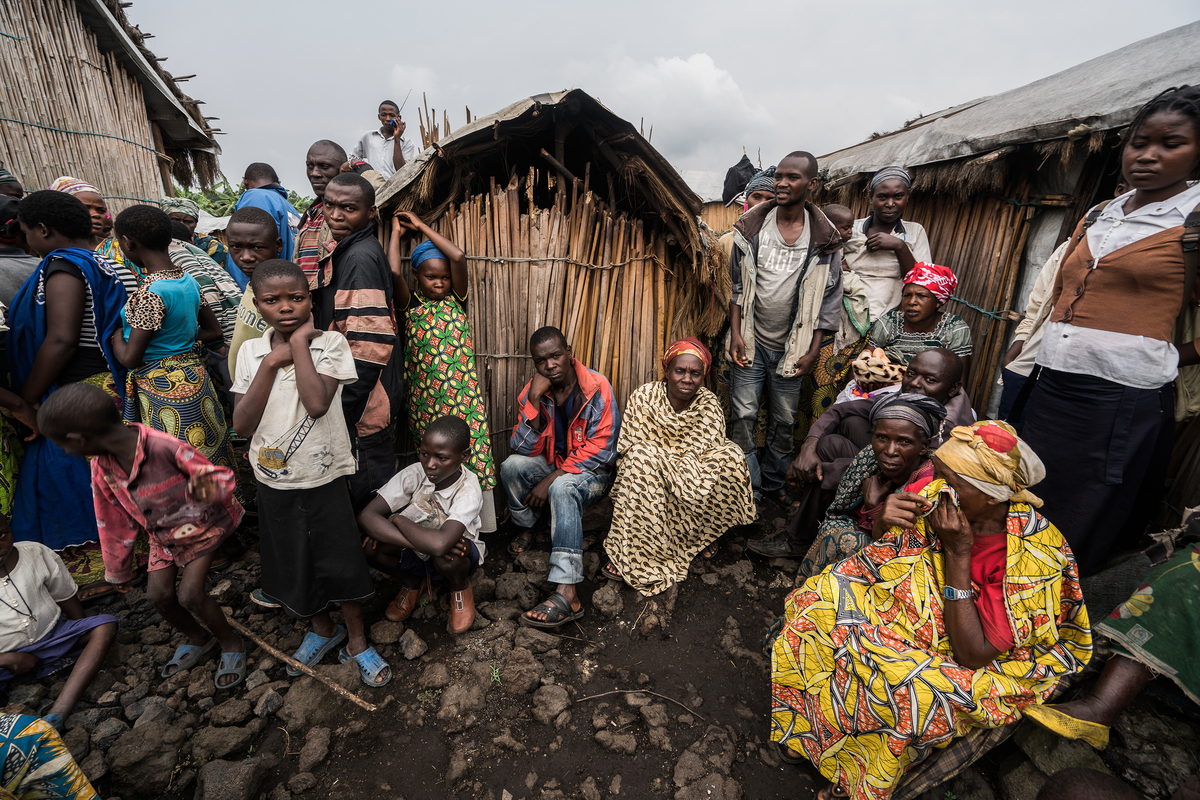 The camp at Mungote is one of the largest for internally displaced persons in the Democratic Republic of Congo, with over 12,000 residents who fled their homes due to ongoing conflict and violence.

Maybe their plight eludes the limelight because, unlike refugees, they don't cross international borders ... or seek to enter the United States or Western Europe, where people debate how many of them to let in ... or undertake harrowing voyages across the Mediterranean.

And maybe it's because of their official label. "Internally displaced persons" (also known as IDPs) sounds vague and a bit confusing, as if they were lost inside themselves.

And "internally displaced person" doesn't sound nearly as dramatic as "refugee." I asked Elizabeth Rushing, who works with IDP issues for the Norwegian Refugee Council, if it's silly to ask if the very term might be part of the problem.

On Monday, the Council issued a report tallying 6.9 million people internally displaced by conflict and violence in 2016. The total number of IDPs displaced by violence or conflict is 40.3 million, double the number from the year 2000.

By contrast, there were 16.5 million refugees as of mid-2016 according to the United Nations Refugee Agency.

We spoke to Rushing, the Council's senior strategic adviser on conflict, about IDPs.

Do you believe IDPs do not get attention from the media as refugees?

We were seeing IDPs really sidelined as an issue in 2016. It lost momentum throughout the year and by the time September rolled around, with the U.N. summit for refugees and migrants, it had really fallen off the radar.

Any theories as to why?

Refugees are literally knocking at your doorstep while IDPs are happening millions of miles away.

We want to bring internal displacement back on the radar and show that this is ground zero for the movement of migrants and refugees across borders. If we're not putting the correct protection and assistance mechanisms into place [for internally displaced people] they're tomorrow's refugees.

Is there data that shows that IDPs are likely to become refugees?

We were surprised at how little hard data there is on how many refugees were previously IDPs.

But in some cases there's a clear correlation. In a survey of several thousand Syrians arriving to the islands in Greece, 85 percent said they were internally displaced [due to the violence] several times inside of Syria before making the trek further afield. We have anecdotal evidence that people internally displace many times before saying, "You know what, we're not finding safety and dignity for our family" and then undertake the risks and dangers of a journey abroad.

The U.N. has an agency dedicated to the needs of refugees. Who looks out for IDPs?

They're very much under the protection or assistance or whims of their own national government, which in many cases is unwilling or unable to help them and in many cases caused them to flee in the first place.

What are some of the factors contributing to the rising number of IDPs?

We have more and more borders closing. Borders are closed in the name of state security — to keep terrorists from flowing through — as well as economic and political reasons.

According to the report, the Democratic Republic of Congo had the most new displacements by conflict and violence in 2016: 922,000. Why such big numbers?

One of the surprises that came out of the report for us, that garnered very little international attention during 2016, was the massive scale of internally displaced people in DRC. There's ongoing conflict in the north and new violence in the south central in the Kasai provinces, which started last July with the murder of a tribal leader that set off a new level of intercommunal violence. The number of IDPs just skyrocketed. And from January to May of this year, there have been 1.5 million more.

Do IDPs in the Democratic Republic of Congo typically get the protection they need?

Some do, some don't. Some are very self-reliant. Displacement is a survival strategy for many people. But in DRC people have been displaced multiple times, and their resilience and self-reliance erodes each time they flee. If they're lucky, they are receiving assistance, but often very short-term. You need food? Here's food? You need shelter? Here's shelter. We have to tackle the political solutions to internal displacement and regular migration, like conflict, weak governments, underdevelopment, massive corruption, environmental degradation. We have to change our thinking to prevent new displacements and find a durable solution.

The report notes that of people displaced by conflict and violence, about 1 in 10 flee "generalized violence" – which can include gang violence or drug-related violence.

That type of displacement is largely invisible because it's not large massive movements. In Central America, it's called a "drip phenomenon." People flee from rural areas taken over by drug lords, people flee inner city gang violence. In one case in El Salvador, 70 people fled the gang-related violence in their farming community and [were settled in a camp] on a basketball court in a nearby town.

What happened to them?

With such dire situations, it must be pretty depressing to come to work.

Pretty much. We start the day off with yoga and meditation and end with a glass of wine.

Is there any good news you run across?

There are many stories of inspiration.

I met this 15-year-old girl who had to flee northern Mali after the Islamist groups took control. She left by herself and came to Bamako, the capital, in the south. She crocheted blankets and sold them in the market and used the money to go to school.

Where did she live?

In the tiny house of a friend of a friend's relative, with like 20 other internally displaced people from the north. And of course she's very vulnerable to the underbelly of mankind in that situation. It's the faces behind the figures that we focus on and that keep us going.