Accessibility links
That Amazing Moment When 82 Chibok Girls And Families Reunited : Goats and Soda On Saturday, jubilant families were reunited with the daughters who'd been held captive by Boko Haram for three years. 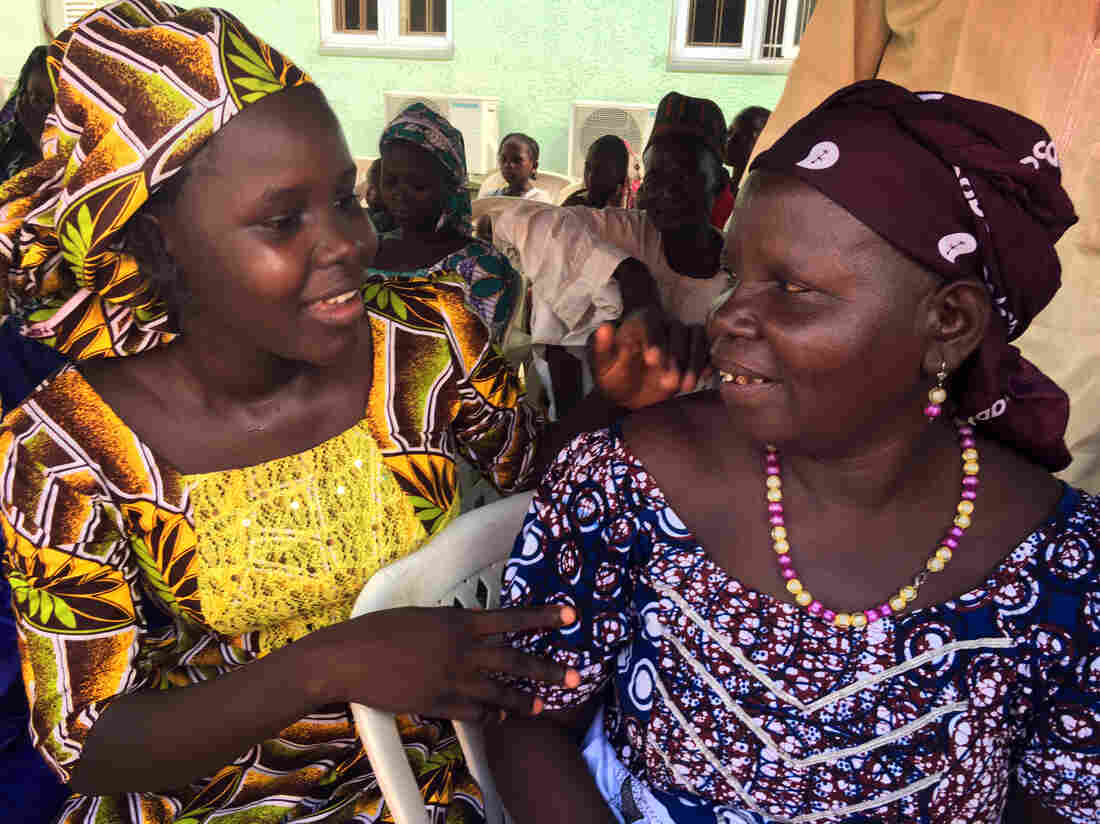 Awa Yirma (left) sobbed hysterically when her parents didn't show up on time. She was afraid they had died. It turned out they were late because their vehicle had broken down. And there was an ecstatic mother-daughter reunion. Ofeibea Quist-Arcton/NPR hide caption

Picture a kaleidoscope of color and a medley of vivid African print cloth surging forward amid screams and weeping — for joy.

That was the magnificent and moving scene, Saturday, in the Nigerian capital, Abuja, as 82 former Chibok schoolgirls — now young women — were reunited with their mothers, fathers, aunts, uncles and other family members, after three years in Boko Haram captivity. Tears were streaming down their faces and gave way to broad smiles of happiness and relief after years of torment and trauma and missing their families.

The Chibok girls, as they're called, were released on May 7 in the northeast, after negotiations between the Nigerian government and the homegrown, ISIS-affiliated extremist group. But they only got to see their families two weeks later in Abuja.

Bonding was immediate, emotional and powerful. Weeping fathers hugged their daughters. Schoolgirls back in 2014, now transformed into young women, the Chibok girls threw their arms lovingly, almost desperately, around their mothers' necks and held them there. 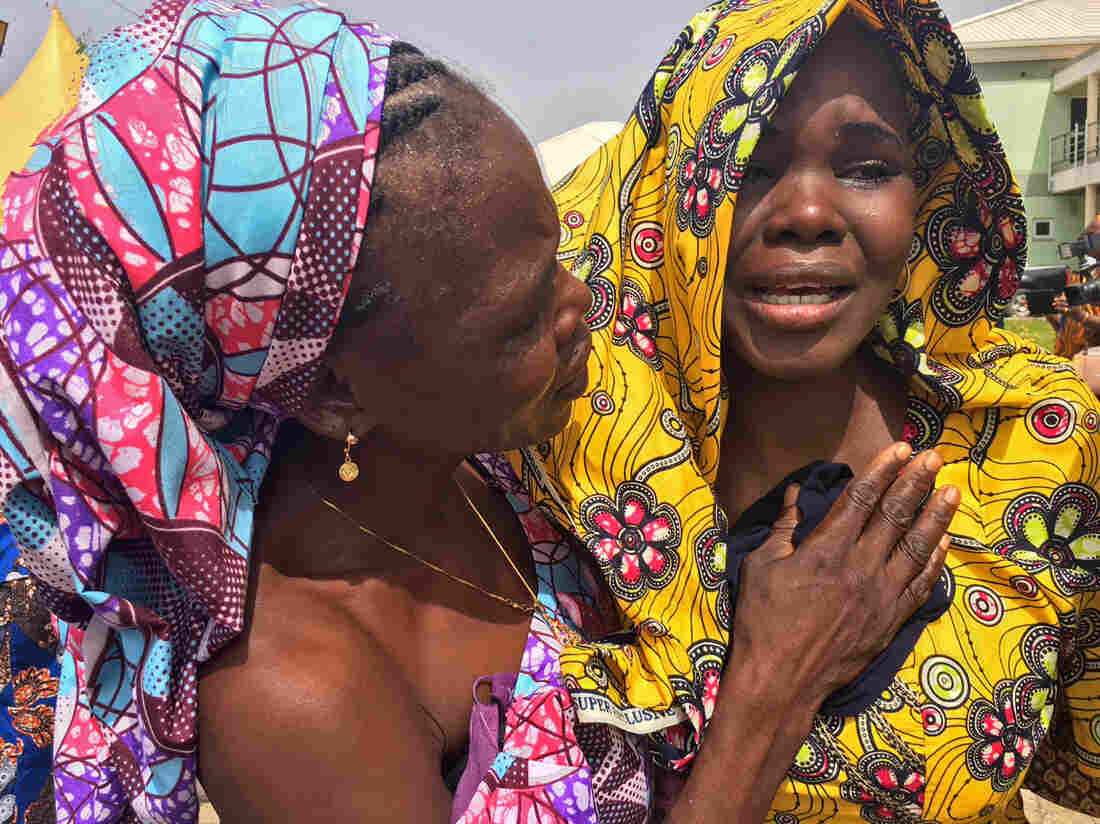 Tears were streaming down the faces of the former Chibok schoolgirls but soon gave way to broad smiles of happiness and relief. Ofeibea Quist-Arcton/NPR hide caption

One of the freed students, Awa Yirma, sobbed hysterically, convinced that her parents had died during her three years as a Boko Haram captive but the authorities didn't want to tell her. Her schoolmates and other mothers rushed to comfort her, as an official assured Yirma that her mother and father were indeed on their way and that their vehicle had broken down.

Heading toward the entrance to meet the latecomers, Awa Yirma let out a primordial cry and leapt forward, knocking this journalist's smartphone, poised to capture the moment, right out of her hands. A desolate face etched with desperation was soon transformed into jubilation as the three hugged and wept.

Later Awa Yirma who, barely an hour earlier had been despondent, was smiling with her mother, Minari, and father, Yirma Lalai, gently stroking her mother's arm and whispering into her ear. Then Awa Yirma rose to dance gracefully and sing with dozens of her freed Chibok schoolmates. 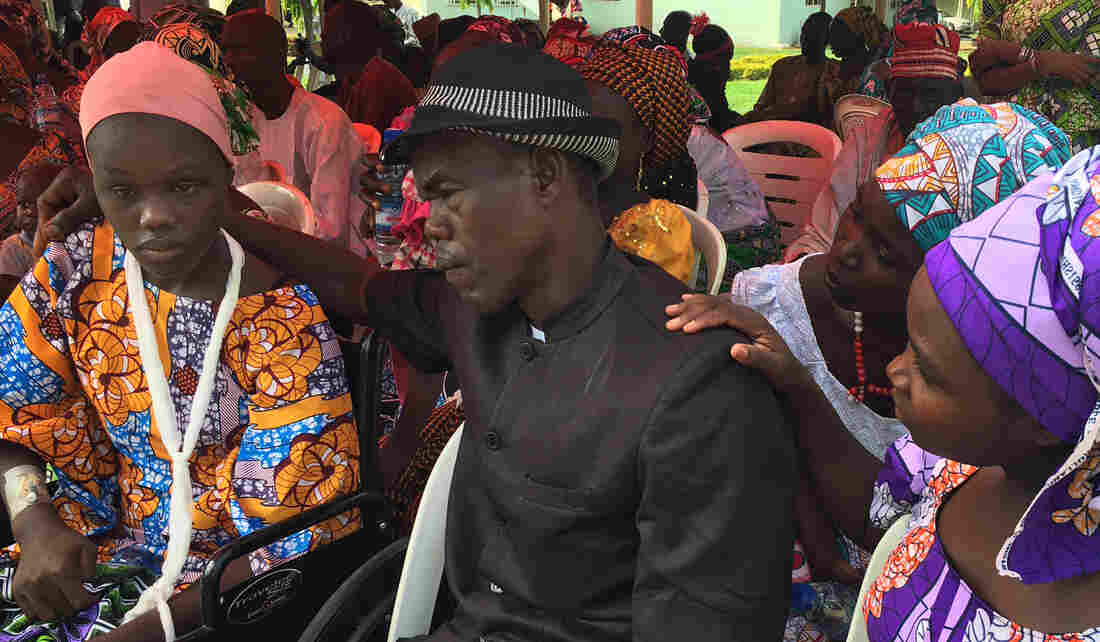 Amina Bulama, one of the freed girls, is in a wheelchair with her left arm in a sling. The cause of her injuries is not known. Her father, Bulama Jona, believes that forgiving Boko Haram is the best way for families to overcome the trauma. Esther Bulama Jona, his wife and Amina's mother, is seated at right. Ofeibea Quist-Arcton/NPR hide caption

In another corner, under one of the giant marquees erected by the government for the reunion, groundnut and maize farmer Bulama Jona's eyes welled up with tears. He cried as he observed his 22-year-old daughter, Amina, who sat serenely — as if deep in thought — in a wheelchair, with her left arm in a sling.

Journalists were not allowed to interview the released students, so it was not possible to establish when and how Amina Bulama was wounded.

Her father tells NPR he knelt down before his daughter, shed tears and prayed, thanking God she survived captivity and was released from the "wilderness."

"I never thought that I would see her in my life again, I never expected to see Amina again, but God has done wonders, I thank God, despite the injury that she has," he says. "I want her quick recovery so that she can continue with her education and learn."

Bulama Jona says he forgives Boko Haram, the group that kidnapped 276 girls in the middle of the night from their boarding school beds in the remote, rural town of Chibok in the restive northeast in April 2014. Most of the girls were Christians and were forced to marry extremist fighters and convert to Islam. Some of the young women have given birth to children who've been branded by some as rebel offspring. Many captive girls and women previously rescued from Boko Haram have been marginalized and shunned, finding it difficult to reintegrate into society.

Some of the Chibok girls have reportedly been radicalized and are refusing to return. There are fears some may have been used in Boko Haram's deadly campaign of suicide attacks, a tactic the group adopted after losing territory it once held to the Nigerian military during its eight-year insurgency.

Despite Boko Haram's abusive record and history of human rights violations, Bulama Jona says forgiveness is the best way for families to overcome their trauma. "Three years [in captivity] is not three days — how she thinks and how she talks is different," he notes about his daughter.

"I thank Boko Haram for releasing our Chibok girls. We forgive them for what they have done to us. To err is human, to forgive is divine," he says of the terrorist network. "These people [the captives] have never done wrong to them. We are pleading with Boko Haram, let them release those people who are still with them."

Sitting with her eldest child, Esther — another of those released — Godiya Joshua could not utter a peep. Earlier, the jolly and gregarious mother, who said she'd been suffering from hypertension for the three years since her daughter's forced absence, had jumped for joy, danced and delivered a heartfelt rendition of a praise song before being reunited with Esther. Joshua says her blood pressure is now way down.

Side by side with her daughter and husband, Andrew, Joshua was lost for words. She just kept looking at Esther. Earlier she'd said, "Yes, my daughter will likely have changed but I take it like that."

Psychologists say families will have to adapt and give space and support to their children after their three-year ordeal.

The young women won't be heading straight home. Their parents boarded buses this morning for the long drive back to Chibok. The Nigerian government is keeping the freed students under its care, in Abuja, as it has done for 21 Chibok girls released in October and three others who have escaped in the past year.

The young women will remain in the capital for medical check-ups, psychological assessment and military debriefing as well as remedial classes to try to catch up on three years of lost education and to pursue vocational skills such as dressmaking.

Some parents, like Bulama Jona, father of Amina, welcome the government's initiative, even though he says her siblings are desperate to have her home and keep phoning and texting. 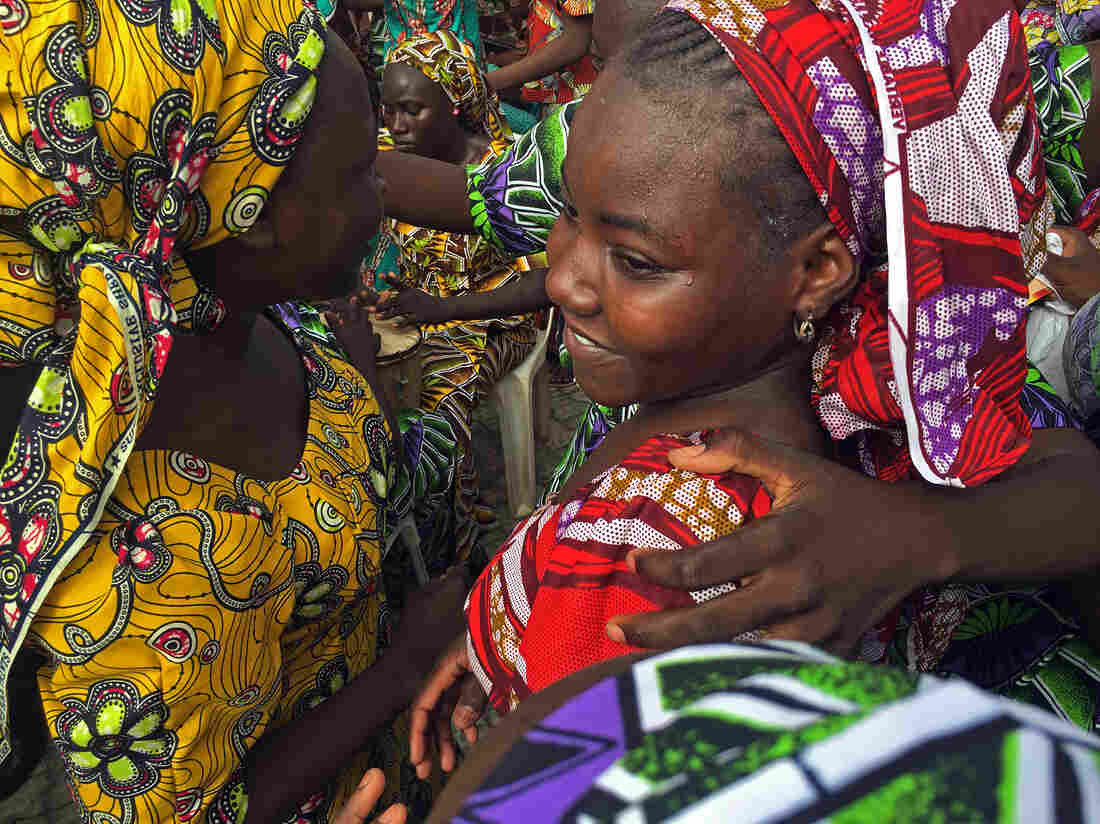 Bonding of the daughters and family members was immediate, emotional and powerful. Ofeibea Quist-Arcton/NPR hide caption 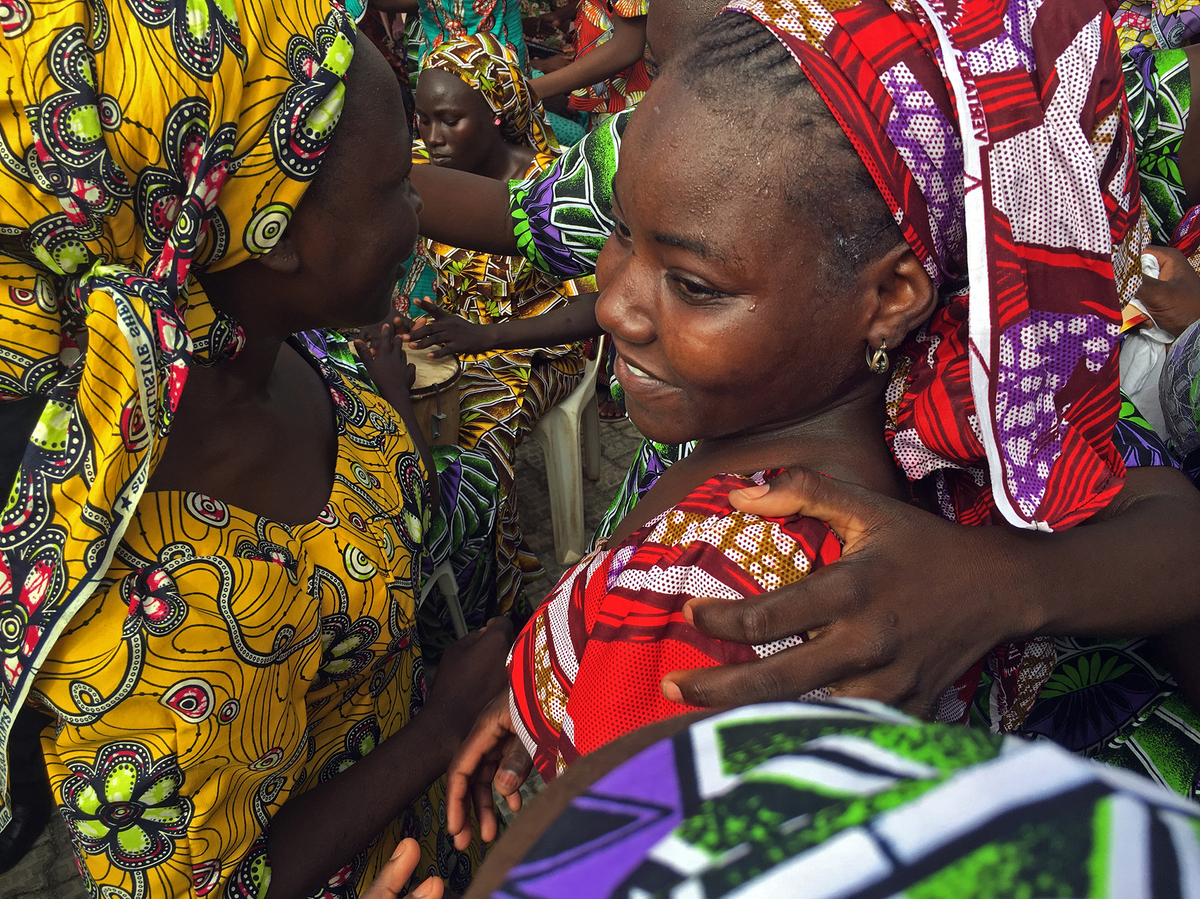 Bonding of the daughters and family members was immediate, emotional and powerful.

Other families, rights' groups and the #BringBackOurGirls campaign have been more critical, saying the young women should immediately be fully reintegrated into their communities and not kept at arm's length in effective government custody. From their perspective, the Chibok girls are simply trading one prison for another.

Yahi Bwata captured the pervasive mood of happiness tinged with sadness at the reunion.

Grasping the shoulder of his daughter, Comfort Bulus Bwata, her father told journalists: "Our joy is never complete until we see the 113" — the remaining schoolgirls who, along with possibly hundreds of others abducted by Boko Haram, are still captives.

"One Chibok girl matters to all Chibok people," he says.

Another father, Bulama Jona, asks Nigeria's federal government to rescue the missing Chibok girls still in the bush: "Our joy cannot be full while they are still in the wilderness. Please use dialogue to bring back those girls."