Accessibility links
When There's Dirty Water In India, Citizens Can Report It To The Cloud : Goats and Soda Scientists and activists in India are training citizens to collect information on water issues like contamination — and upload it so it can be used to push for change.

If You See Dirty Water, Don't Just Gripe. Talk To The Cloud!

If You See Dirty Water, Don't Just Gripe. Talk To The Cloud! 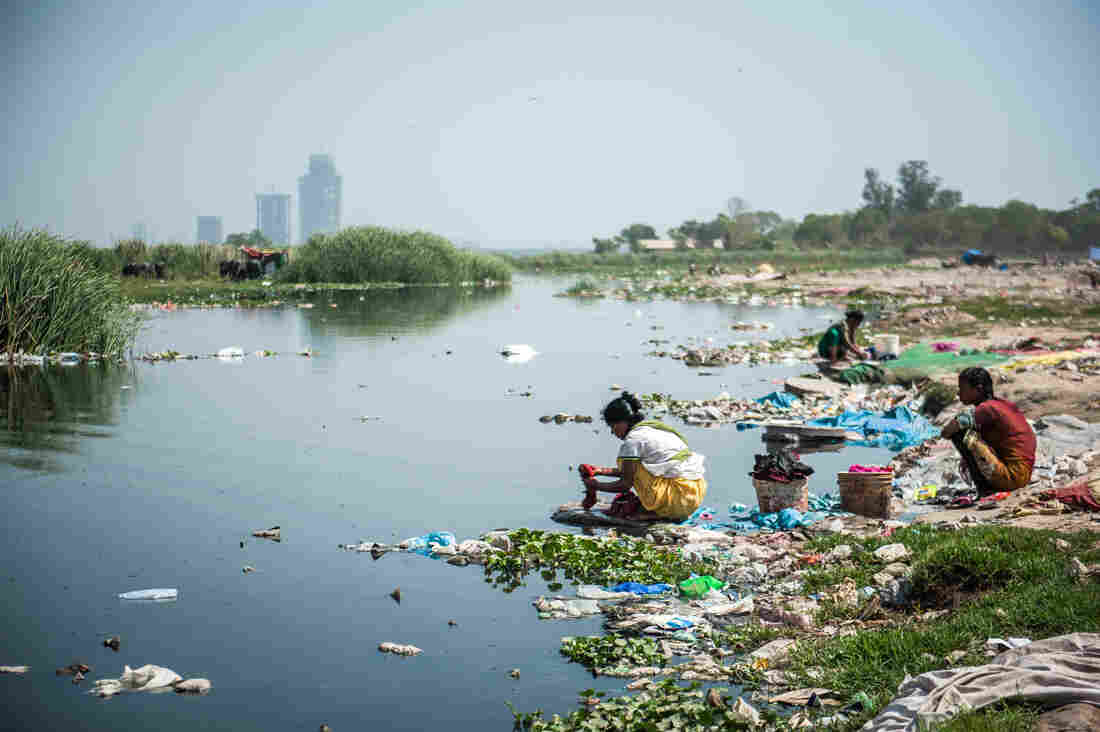 The Yamuna River, which flows through Delhi, is polluted by industrial discharges and domestic sewage. Barcroft Media/Getty Images hide caption 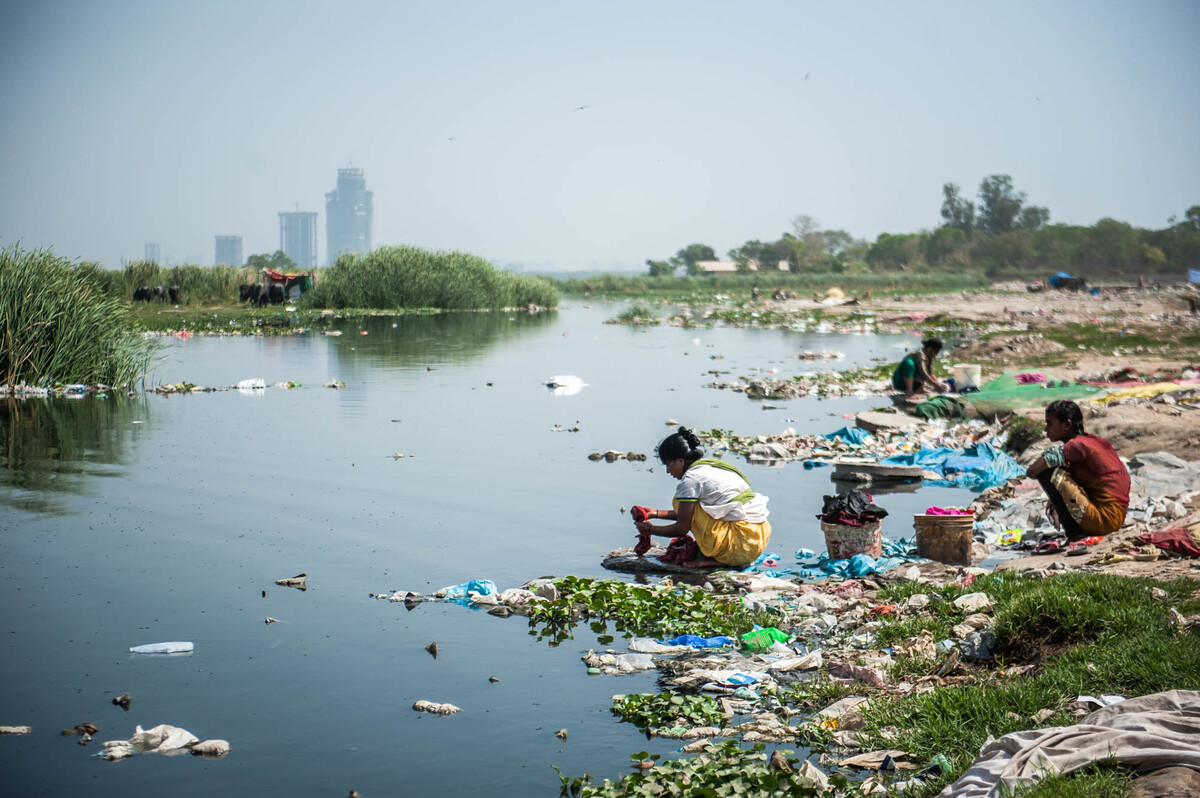 The Yamuna River, which flows through Delhi, is polluted by industrial discharges and domestic sewage.

Water stagnating at a construction site. A dwindling number of mangroves along the shore. Lakes choked with algae and hyacinth. Sewage pipes leaking into the sea.

These are common sights in India.

Until recently, the best people could do to try to draw attention to such problems was to tweet pictures to the government or write letters to the newspaper — hoping someone with the power to make changes would take note.

Increasingly, scientists and activists are enabling citizen observers to collect data and upload it to the cloud with the aim of pushing all stakeholders — government agencies, corporations and citizens — toward change. One of the United Nations' Sustainable Development Goals is free, drinkable water for all by 2030.

"These initiatives are very important for empowering citizens, making more data available — and this helps in strengthening accountability," says Binayak Das, program coordinator of the Water Integrity Network, an NGO in Germany.

In her fieldwork across India over the last few years, activist Latha Sankarnarayan says she's "often seen scarcity or quality [of water] as a core issue."

Often official data is spotty, inaccurate or simply fudged, she says. In Tamil Nadu, for example, "people living in [a certain] area claimed that for the past two to three years there was no rainfall. Official rainfall data showed that rainfall was normal for those years and yet the farming lands were fallow and dry."

Additionally, says Umrbek Allakulov, Research and Development Officer at Water Integrity Network, government agencies and research centers in developing countries may not have the ability to monitor and test water quality. "Under such circumstances, citizen-led water quality monitoring can offer a supporting hand to help ensure that water is safe for human consumption."

So Sankarnarayan launched an app called Climatix to measure climate resilience by crowdsourcing.

Technology like this is enabling scientists to gather frequent and reliable data from the grassroots level — and to fill in gaps. And proponents of citizen observations say having more hands on deck helps advance not only science but also policy.

"If I train 200 citizen scientists, I'll be able to have a much more valid, scientifically robust reason for why something needs to be changed," says Steven Loiselle, head of the FreshWater Watch program at the nonprofit EarthWatch Institute. Freshwater Watch has active projects in Delhi's Yamuna river and Hyderabad's lakes.

And people supporting citizen data gathering say they have seen outside data lead to change.

Claire Grandadam, also from Water Integrity Network, says it happened in Costa Rica three years ago. With the data and citizen pressure, the water board set up water meters to check supply and billing, she says.

"The measurements were used as evidence to advocate policy change," she says. "We've seen that when decision-makers are faced with concrete data, they can be pushed to take action."

Change and accountability are, of course, the Holy Grail. Elsewhere, in Costa Rica, citizens measured the levels of herbicides and pesticides in their drinking water. While these groups are still awaiting recourse, documentation has helped them take their fight to the courts.

"The Flint water crisis is [another] case in point," adds Allakulov, " where independent and citizen-led water testing raised the alarm about the lead-contaminated water, which eventually exposed neglect, unethical behavior and potential corruption on the part of several public officials."

Sometimes governments initiate citizen drives themselves, like in California, where IBM worked with the state to make a water mapping app called Creekwatch.

In India, though, crowdsourcing apps are not yet hugely popular. But they are gaining steam. In cities like Mumbai, where monsoon rains are torrential every year, there several pothole-logging apps. In Bangalore, the Jackboy app can measure air pollution.

But the app advocates note that there needs to be education about the issues before an app will find an audience.

Sankarnarayan, for example, is leading interested parties on a walk through the rivers and wetlands of Mumbai to create awareness and highlight their connection to the near constant flooding of the city. She hopes it'll encourage citizens to log data about air, water and soil in the Climatix app.

"Anybody can send in their observations or report on things like water-logging [where water saturates the soil] in a specific area, which may lead to flooding if there's a sudden cloudburst or extreme climatic event — water scarcity, salinity increase or drought," Sankarnarayan says.

Sometimes, needed information goes beyond simple observations on water levels or color; it can require doing a quick lab test on the go.

Akvo (Esperanto for 'water') is a nonprofit foundation that provides software and services for disadvantaged populations, with a focus on water management. 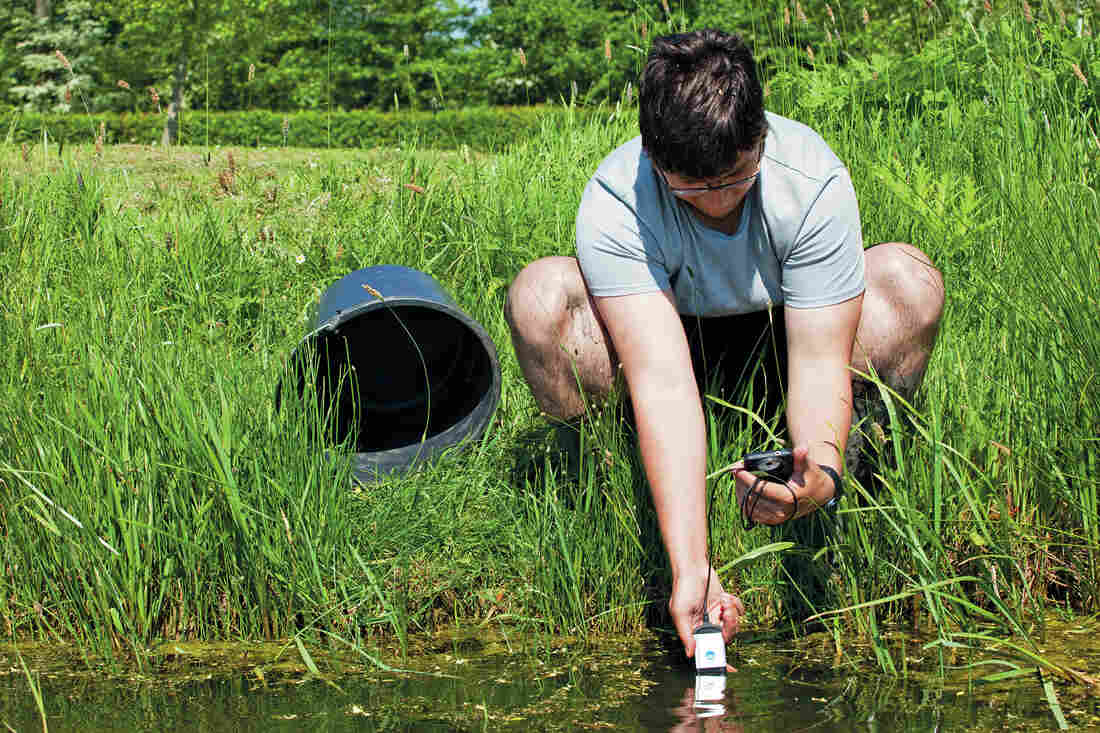 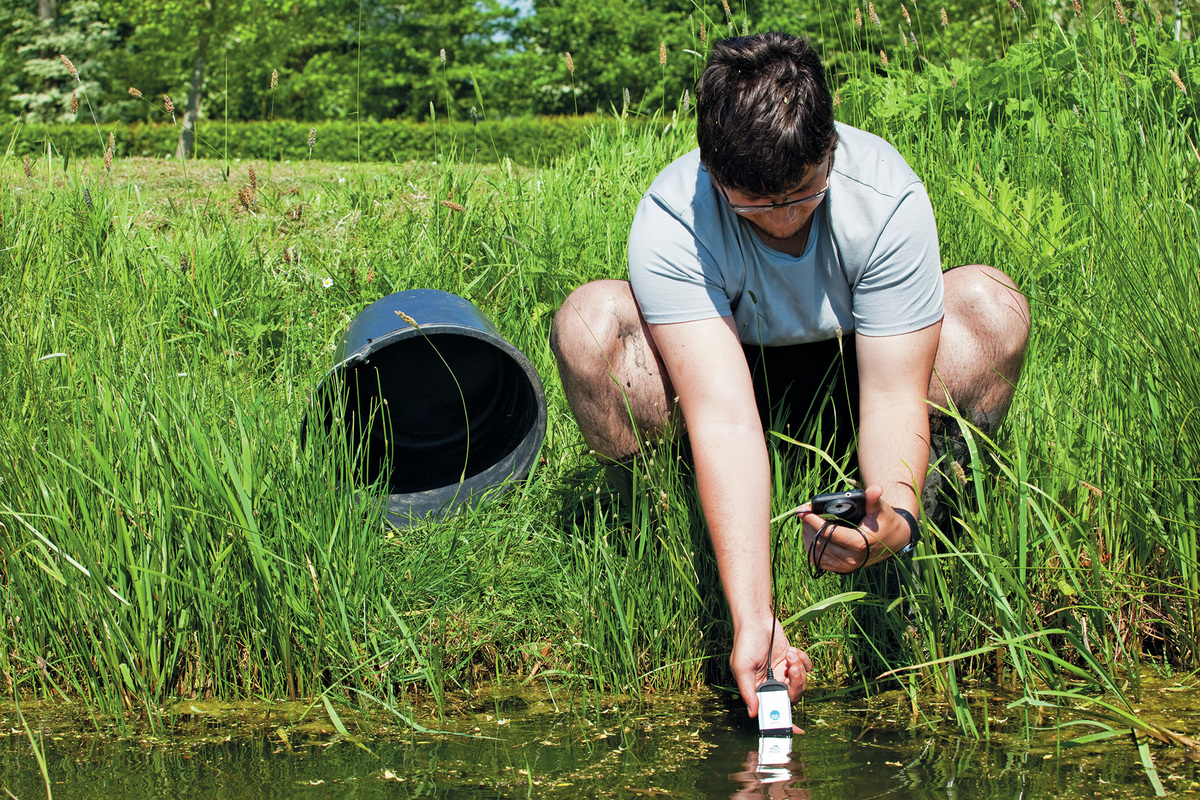 A volunteer uses an AVKO test kit to check water for sodium, calcium and potassium.

Conducting a breakout session during World Water Week in Stockholm last year, Akvo's Bjelkeman-Pettersson demonstrated the mobile-phone-enabled water-quality tests that their lab in Bengaluru uses. One kit contains a simple strip test, say for pH or phosphates. Another consists of a collection jar and a reactant chemical that can test for fluoride — a big problem in India and Bangladesh. There, too much fluoride in the drinking water has led to mass fluorosis, a condition that leads to calcification of ligaments.

"This [fluoride] test on a mobile phone is of equivalent quality as an ion selector device used in the lab; the difference is this cheaper and portable," Bjelkeman-Pettersson says. The data is calibrated, interpreted and sent to the cloud with time stamps and GPS markers. The test can be extended to check chlorine, bacteria levels in the water, and, soon, arsenic — another big problem in the Indian subcontinent.

Saikiran Gaddam, an engineering student in Hyderabad, was one of 11 Akvo volunteers who spent 10 days last year in the field — in the rural Nalgonda district about 60 miles from the city — testing 240 wells, streams, ponds and water filtration plants. Armed with gloves and a small kit the size of four decks of cards, they did basic tests for five hours a day out in the hot sun. The Akvo app on their mobile phones let them log, map, and upload data on contamination and chemical run off.

"We came to know ground realities," Gaddam says. "We saw the pipeline connections, how water is getting polluted, we saw how the villagers live and what they have to face."

The drinking water options in this part of India are limited. Local water sources may be toxic because of runoff from industries, for example. If water is delivered from a filtration plant, it could lack minerals.

But the local administration and police department of Nalgonda were responsive: The water authorities promised to monitor the filtration plant and close off contaminated wells.

"We fill a vacuum," says Gaddam. "With our help, citizens can hold the government accountable."

He admits there are limitations. Citizen observatories are not labs, though their trainers work to put checks, balances and cross-references to keep the data as reliable as possible — and to keep the people safe.

There also are some concerns about putting the data in the cloud.

"And many studies show that minority communities don't have access," says Das of Water Integrity Network.

It's important for the data to get the right kind of attention, proponents say. "Ensuring universal access to safe and affordable drinking water for all by 2030 requires serving the unreached and underserved in remote and difficult areas," says Allakulov. "Walking the last mile and extending safe drinking water to those at the base of the pyramid may be just the avenue that will benefit greatly from citizen-led water quality monitoring"

Sankarnarayan with the Climatix app remains hopeful. Her mantra: "What we can measure, we can manage."

Chhavi Sachdev is a freelance reporter in India. You can reach her @chhavi. This story was reported partially through a grant from SIWI at World Water Week, 2016.