Accessibility links
Photos Of Somalia: Surviving In One Of The World's Driest Places : Goats and Soda In Somalia, photographer Nichole Sobecki saw how the worsening drought is transforming people's lives. 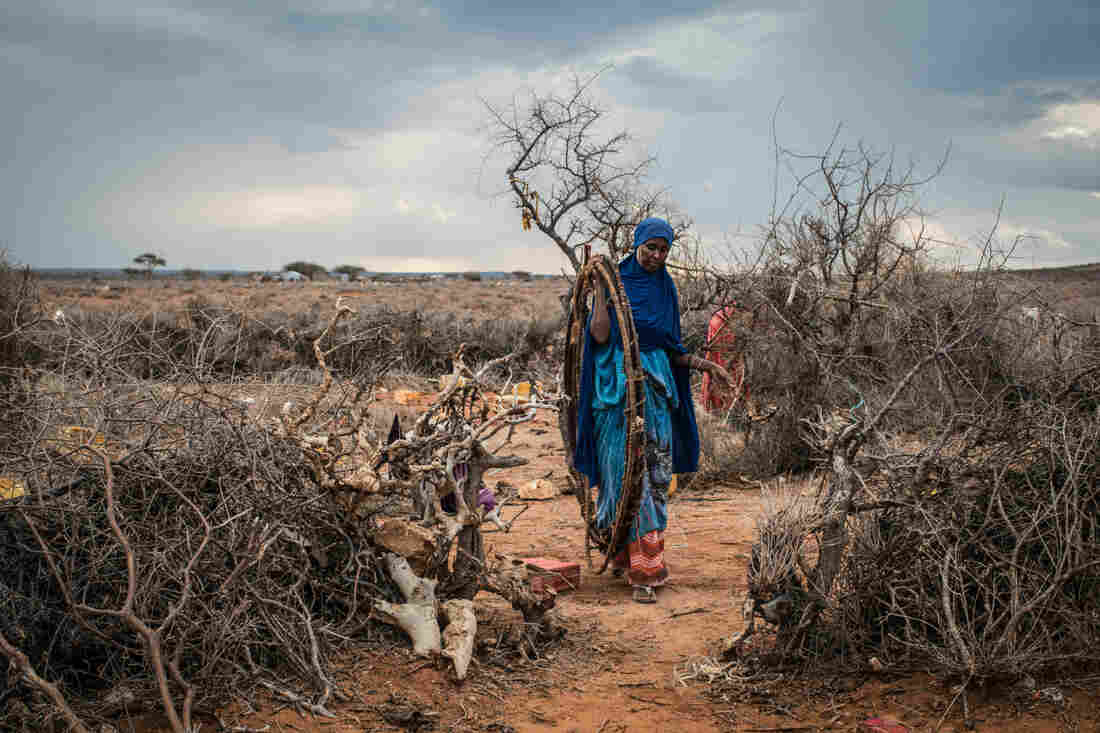 Dheg Mohamed dismantles her home on a plain outside Aynabo, Somaliland. She had to relocate after successive seasons without rain left her well dry. Nichole Sobecki hide caption 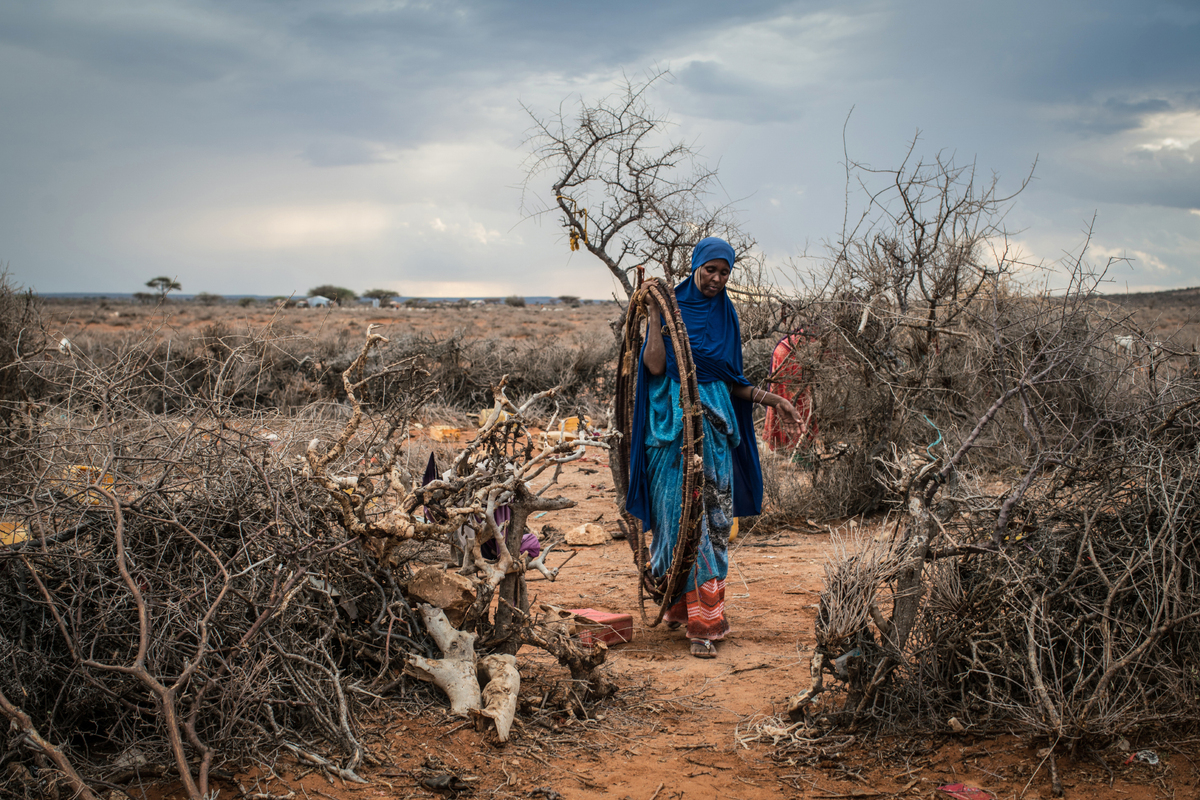 Dheg Mohamed dismantles her home on a plain outside Aynabo, Somaliland. She had to relocate after successive seasons without rain left her well dry.

Over the last 2 years photographer Nichole Sobecki and journalist Laura Heaton have documented the devastating impact of climate change on one of the most unstable places in the world, Somalia.

Their reporting appears in Foreign Policy magazine in an article titled "Somalia's Land is Dying. The People Will Be Next."

What they found is summed up by Somali-American environmental activist Fatima Jibrell. Jibrell tells them that the changing weather patterns are making Somalia unlivable. "Maybe the land, a piece of desert called Somalia, will exist on the map of the world," Jibrell says of the future of her country, "but Somalis cannot survive."

Sobecki and Heaton repeatedly traveled to Somalia and the sprawling Dadaab refugee camp in Northeast Kenya to report on how the lives of Somalis are being affected. 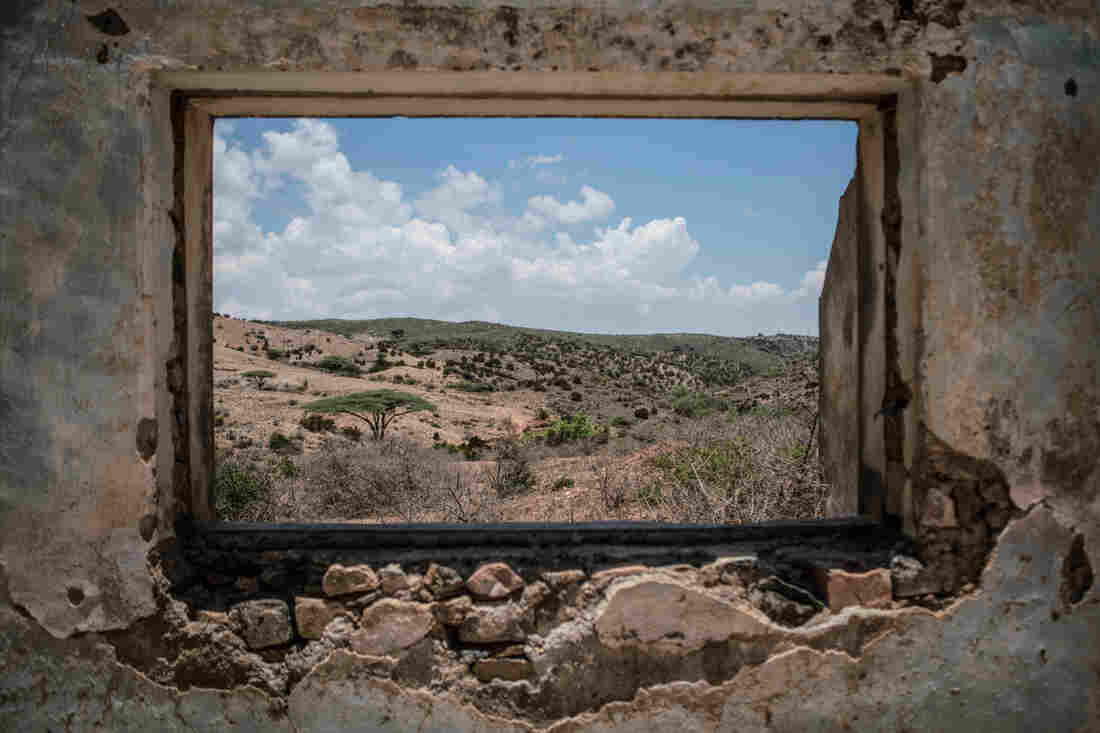 Somalia's arid landscape as seen from inside a decaying colonial building in the northwest town of Sheikh. Nichole Sobecki hide caption

Goats and Soda's Jason Beaubien talked with Sobecki about this reporting project and the current state of Somalia.

Because of the security situation, there's not much reporting that comes out of Somalia. Just to start, what are conditions like in Somalia right now?

We are seeing a massive humanitarian crisis this year. About half the country is facing food shortages, famine has been declared in parts of country. There was a drought in parts of the country last year, and what we're seeing this year is far, far worse. 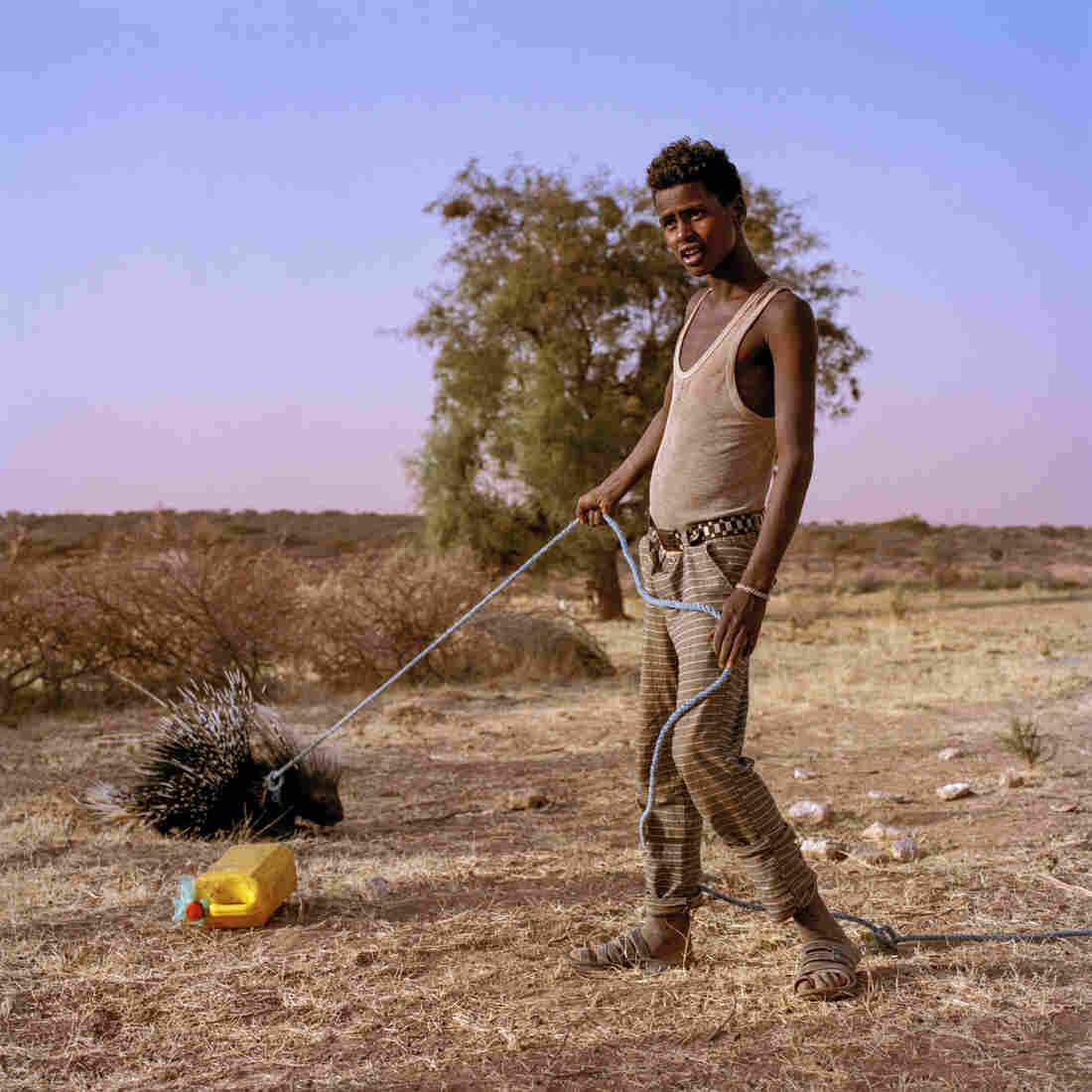 Ahmed Abdi Omar, 17, holds tight to the rope around a porcupine just outside the city of Aynabo in southeastern Somaliland. The porcupine was captured because it was destroying crops. Omar's family planned to eat it. Two weeks earlier a dispute over grazing land in this community left one villager dead. Nichole Sobecki hide caption

How is climate change transforming the landscape or changing people's lives?

Somalia is a place where people's livelihoods are intimately tied to the land. It's a hot and dry place. Somalis have traditionally been incredibly resilient at coping in a harsh environment where there's maybe only a few inches of rainfall each year. But what we've seen happening is that as the rainfall becomes more erratic, people are not just facing a drought once every 10 years they're facing the drought every year or every other year.

We met Somalis all over the country who were impacted, where this is transforming people's lives right now. 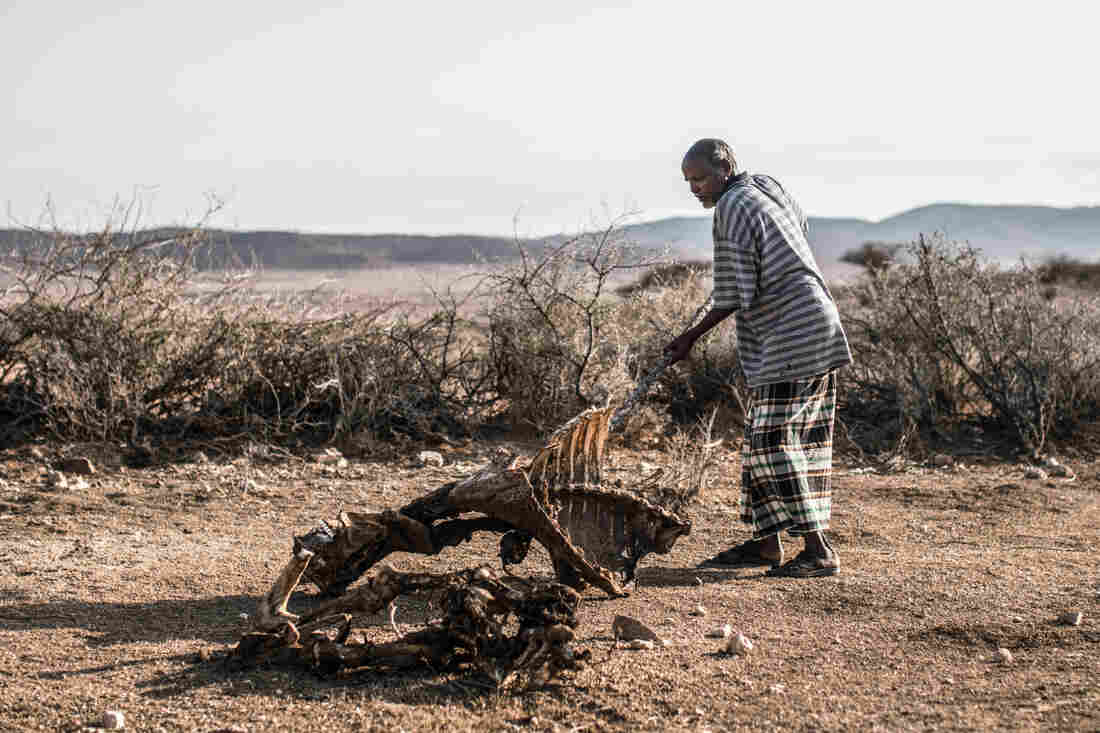 Daud Mohamed, 45, father of nine, moves the bones of one of his cows off the path. Most of his livestock died during the 2016 drought in Somaliland. Several seasons of abnormally low rainfall have left millions in the Horn of Africa in need of food aid, according to the U.N. Nichole Sobecki hide caption

And you're saying these erratic rains are forcing people off their land, which is adding to the conflict and turmoil in Somalia.

Yes. So this project has focused on how climate change and environmental degradation are fueling migration.

There's a lot of other things at play — politics, insecurity. But I think it's really critical to understand the role of the changing environment. And you know there's very little understanding of how the environment plays into the [high] levels of migration that we see in Somalia.

One of your photos is of migrants waiting under an outcropping of rocks for smugglers to take them to Yemen. What was going on in that scene?

That is in Mareero [a coastal village], which is sort of a smuggling hub in Puntland, a semi-autonomous region in the northeast. And that day I had gone just to see the area. I wasn't expecting to come across migrants. But as I was getting closer to Mareero I started seeing people walking through this really dry, stark landscape. There's no town or anything that they would be walking toward.

And what I realized as I got closer was they were walking to these caves and people were gathering there, waiting for night to set in and the boats to arrive that would take them to Yemen. They were both Somali and Ethiopian migrants. They had decided to make this very dangerous journey by ship to Yemen. 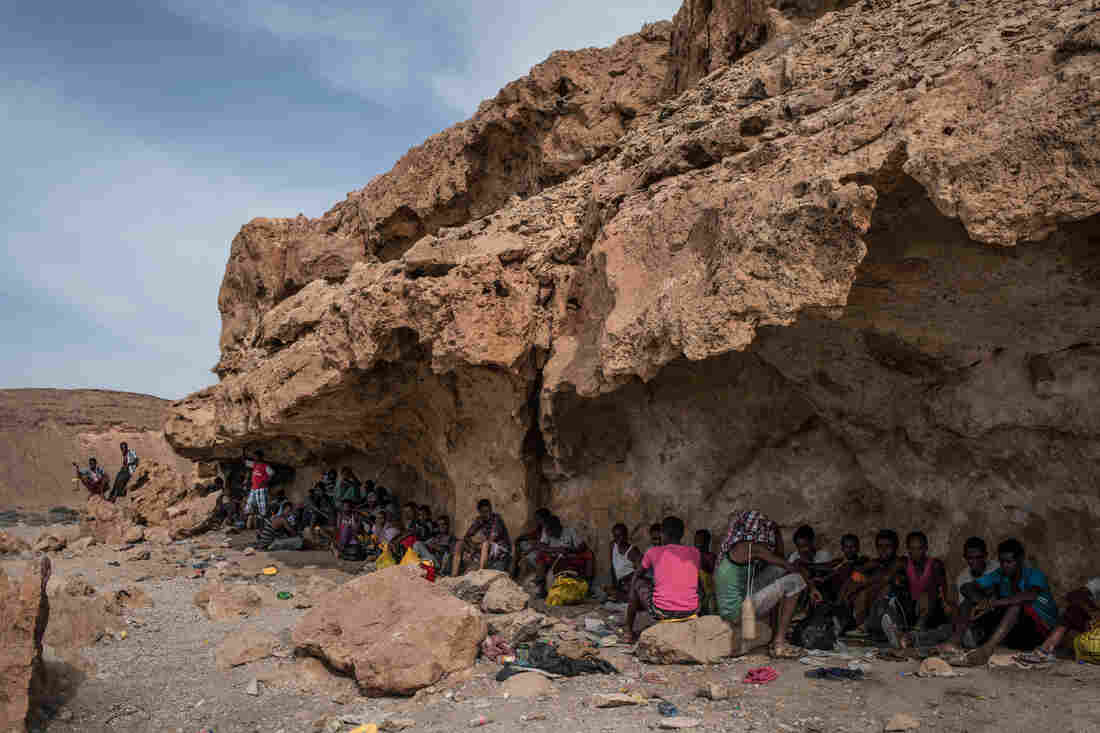 Somali and Ethiopian migrants crowd into caves in the coastal village of Mareero in the semi-autonomous region of Puntland. The migrants are waiting for smugglers with sailing boats to take them across the Gulf of Aden to Yemen. Nichole Sobecki hide caption

Why Yemen? There's a brutal war going on in Yemen, a food crisis, a cholera outbreak.

I think that there are no paths for migrants to take that are safe or secure. What we're seeing is that migration is increasing exponentially in all directions. People are leaving the region however they can. Some are going through Libya and across the Mediterranean and some are going to Yemen. That's really telling because you know Yemen is not a place that I view as secure or where I would want to go. The fact that people are making that choice is a sign of how desperate the situation is.

I want to ask about your own security doing this reporting. Somalia is an extremely difficult place for Westerners to work. Rates of kidnapping are incredibly high. You're a white American. How do you go about operating for weeks at a time in Somalia?

We put a tremendous amount of research into planning this trip, really mapping out the journeys we wanted to make. This meant factoring in not only which roads do we take and how long can we stay in any given place but also what clan is my driver compared to the security [person] compared to the translator.

What a difference a few decades can make. Two shots of Borama, Somaliland. The image taken on the left is from Murray Watson's land surveys of Somalia in the 1980s. The shot on the right is of the same spot, taken last year by photographer Nichole Sobecki. Left image courtesy of Resource Management and Research, Right image by Nichole Sobecki hide caption

Part of your story focuses on British ecologist Murray Watson, who for decades had been doing an extensive mapping of Somalia's land and natural resources. He was abducted by gunmen in rural Somalia in 2008 and has not been heard from since. I was struck by how lush some of his images of Somalia were. Have you seen Somalia when it's lush and green like that?

I never had an opportunity to see Somalia in the way it was back in the late '70s and early '80s. Also the south of Somalia is far more lush than the north. But what we've seen in the last few decades is a combination of increasingly erratic rainfall coupled with environmental degradation, much of which has been driven by the charcoal trade. And we've just seen massive deforestation across the country. So what Murray Watson and his team of scientists saw no longer exists. [Somalia] is a different landscape than it was 30 years ago. 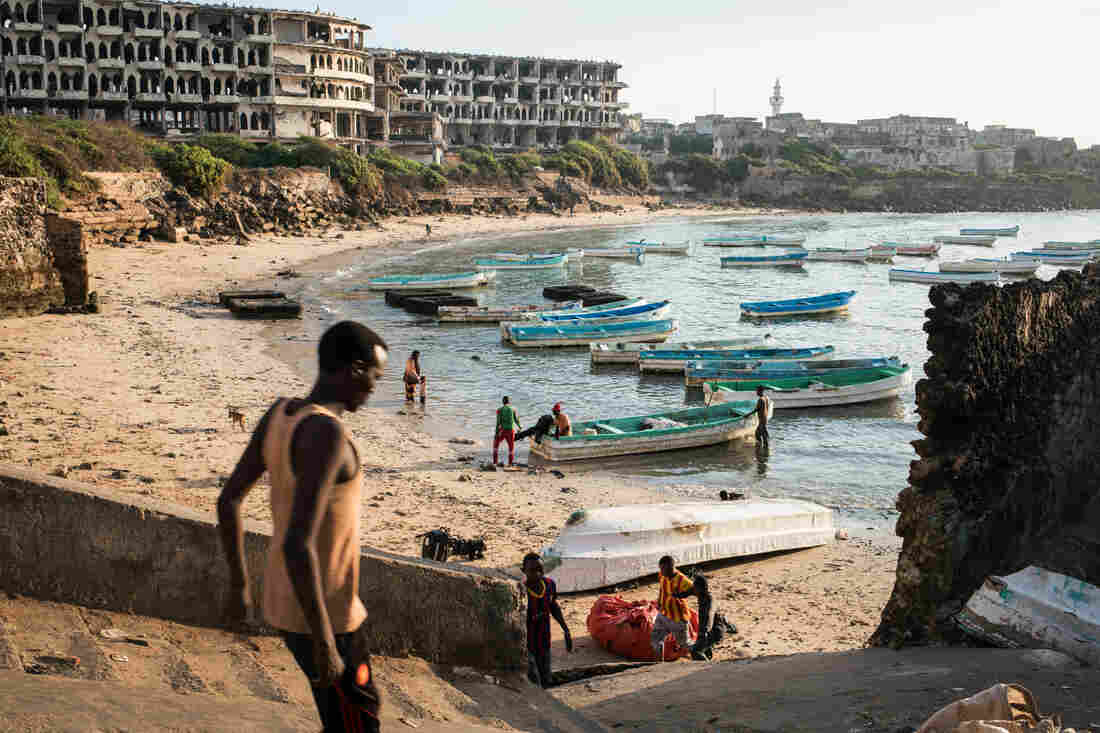 Fishing boats gather at dawn in the old port in Mogadishu, the Somali capital, in front of destroyed Aruba Hotel. Somali fishermen-turned-pirates have made the waters off the Horn of Africa one of the most treacherous places in the world for international shipping vessels. Nichole Sobecki hide caption

I love working in Somalia. I think Somali people are some of the funniest people I've ever met. They have a good sense of humor and they're incredible storytellers. Poetry and storytelling is a key part of their culture.

It also remarkably beautiful and I think that's a part of the country that people often don't get to see. It's important to understand those things because people often do write Somalia off as a lost cause. You know this is not just a hopeless case. This is a place that has been traumatized by conflicts over decades. But there are reasons for this, and this isn't a cycle that needs to keep repeating itself. We need to look at Somalia in terms of what we can be doing to better adapt to environmental degradation and climate change. We live in an increasingly interconnected world, and Somalia is not just somebody else's problem. Somalia's problems are our problems.