Accessibility links
A Refugee Scholarship Helped Woman Yemeni Scientist Escape Her War-Torn Homeland : Goats and Soda First she was shot at on the way to work. Then her house was destroyed by a bomb. That didn't deter this female scientist. 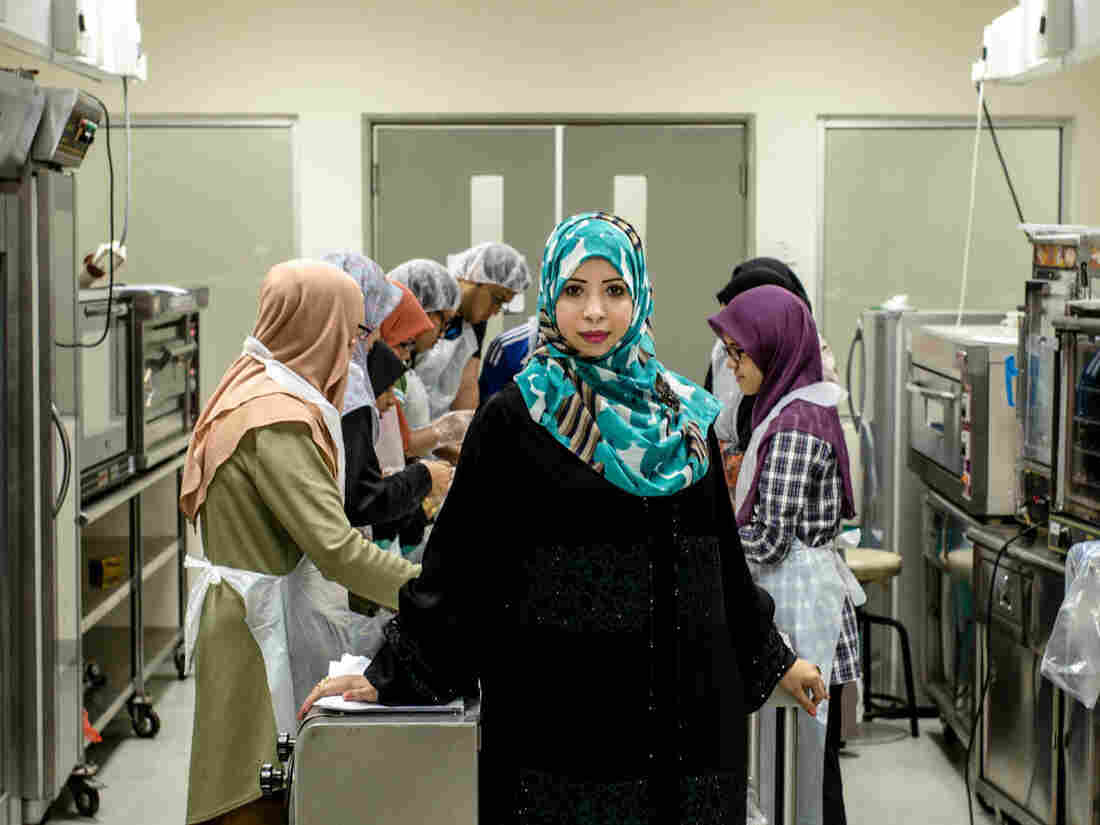 "In college, I would tell my friends that I wanted to pursue a Ph.D., and they would chuckle and ridicule the idea," says Eqbal Dauqan, who is an assistant professor at the University Kebangsaan Malaysia at age 36. Born and raised in Yemen, Dauqan credits her "naughty" spirit for her success in a male-dominated culture. Sanjit Das for NPR hide caption 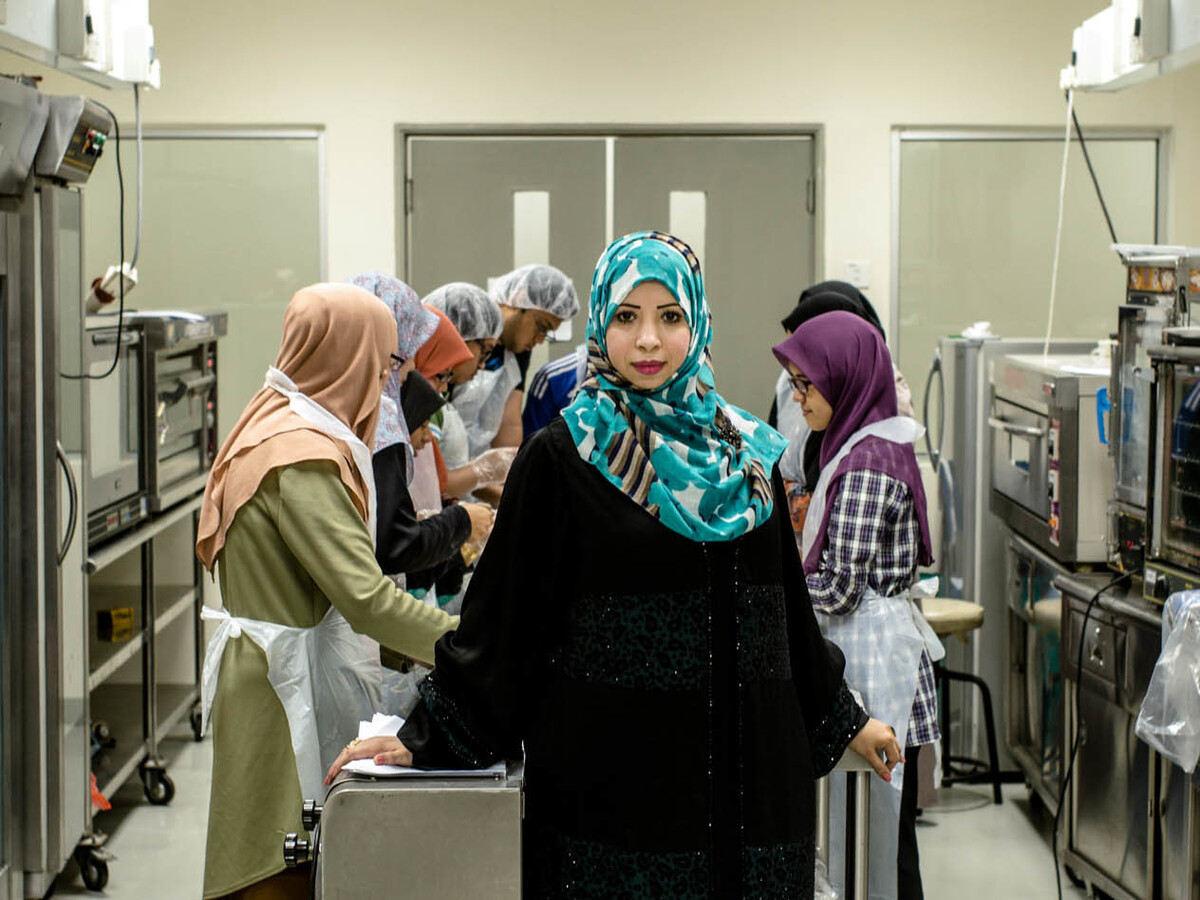 "In college, I would tell my friends that I wanted to pursue a Ph.D., and they would chuckle and ridicule the idea," says Eqbal Dauqan, who is an assistant professor at the University Kebangsaan Malaysia at age 36. Born and raised in Yemen, Dauqan credits her "naughty" spirit for her success in a male-dominated culture.

Two years ago, Eqbal Dauqan was going to work in the morning as usual. She's a biochemistry professor. And was driving on the freeway, when suddenly: "I felt something hit my car, but I didn't know what it was because I was driving very fast," she says.

Dauqan reached the parking lot. Got out of the car and looked at the door. What she saw left her speechless.

"A bullet hit the car, just on the door," she says.

The door had stopped the bullet. And Dauqan was OK. She has no idea where the bullet came from. But it turned out to be an ominous sign of what was to come.

Dauqan is a female scientist in what's possibly the hardest place on Earth to be a woman: Yemen.

The World Economic Forum ranks Yemen as the worst country for women's rights. In Yemen, many women can't leave the house without permission from a male relative.

"If she goes out with her husband or brother, that's OK. But not by herself. " Dauqan says. "Not everyone follows this. But this is our culture."

A culture where two-thirds of women can't read. About half are married by age 18 -- and sometimes as young as age 8.

And then there's the black veil. Many women in Yemen wear a niqab — a black veil that completely covers their faces, except for a tiny slit across the eyes.

Daquan wears a niqab when she's in Yemen. She even wore one during her TEDx talk there back in 2014. But she doesn't wear one in other countries.

She may respect it -- but not blindly. For the past decade, Dauqan has burst through glass ceiling after glass ceiling with fearlessness and grace.

Even as a young girl, she was a rebel. "I was a little naughty," she says with a snicker.

She liked breaking rules. And proving people wrong. So when her parents told her she might not have the smarts to go into science and engineering — like her dad — Eqbal thought: Watch me.

"I told my father, 'I've heard a lot about scientists in chemistry. What is the difference between me and them? So I want to try," she says.

And she did more than try. She crushed it.

Eqbal won over her father and got his financial support. She was the first among her friends to finish college. Then she got a scholarship to do her Ph.D. in biochemistry at the Universiti Kebansaan Malaysia, where she studied the nutritional properties of palm oil.

That led to her writing a popular book about the fruits mentioned in the Holy Quran and their health benefits. For example, Indian Jujube — also known as red dates — are the most cultivated plant in the world and have 20 times more vitamin C than citrus fruit, Eqbal writes in her book.

Next came the prizes. In 2014, Dauqan was named one of the top female scientists in the developing world by the Elsevier Foundation. News programs in the Middle East and in China ran feature stories on her. She became so famous that Al Saeed University made her an assistant professor and head of a department — all this before she'd turned 35. Dauqan was on top of the world.

And then one morning, it was all taken away.

"They were just sleeping"

In March 2015, Dauqan's hometown of Taiz got pulled into Yemen's bloody civil war. Planes started flying over head, dropping bombs — even on homes and schools.

"They were bombing my university!" Dauqan exclaims. "They killed some of my students.

Dauqan turns to her computer and brings up some photos. On the screen is a photo of several bodies laying flat on the ground. The bodies are covered in white sheets, with only their faces showing.

A few of the bodies are small.

"Those are two children in our family," Dauqan adds. "They were just sleeping."

And then they were gone — Dauqan's cousins on her father side and their sons and daughters.

"That is why I leave my country," she says.

After the bombings began, Dauqan had to stop her research. The university shut down. And it wasn't safe for her to leave home. She was trapped in a city where snipers target children and bombs fall on mosques, schools and markets.

During one month of 2015, doctors treated more than 4,000 civilians in a Taiz hospital, the nonprofit Doctors Without Borders reported. MSF hospitals have been hit with bombs four times.

Across Yemen, about 10,000 civilians have been killed in the war and more than 40,000 have been wounded. the U.N. reports. More than 370,000 children are now malnourished because they can't get food.

And then one day, after spending months in hiding, Dauqan had an idea: Maybe her science could get her out of the war.

She started texting her mentor, Aminah Abdullah, a food scientist at the Universiti Kebangsaan in Malaysia. They applied for a special refugee scholarship with the Institute of International Education-Scholar Rescue Fund, based in New York. She got it, and after a few months, she was safe on a plane headed for Malaysia.

Now she's working to save up money so she can bring her parents and sister to Malaysia. "It's very difficult," she says. "But I have to be strong. I want to be strong!"

Dauqan works long hours in labs, continues to publish papers and mentor students. And she has never lost sight of her dreams — even her ultimate dream.

"My dream is to win the Nobel Prize," Dauqan says with a chuckle. "It is very hard. So I don't know. "

But Dauqan has already done so much for science — and society. When little girls in the Middle East see photos of Eqbal as a chemist — wearing a head scarf, measuring pH — they don't need to use their imagination to think: "I could be just like her. I could be a scientist."