Accessibility links
Spillover Beasts: Which Animals Pose The Biggest Viral Risk? : Goats and Soda Rodents, primates and bats likely carry hundreds of thousands of viruses we haven't yet identified. But how do you know which ones might infect humans? 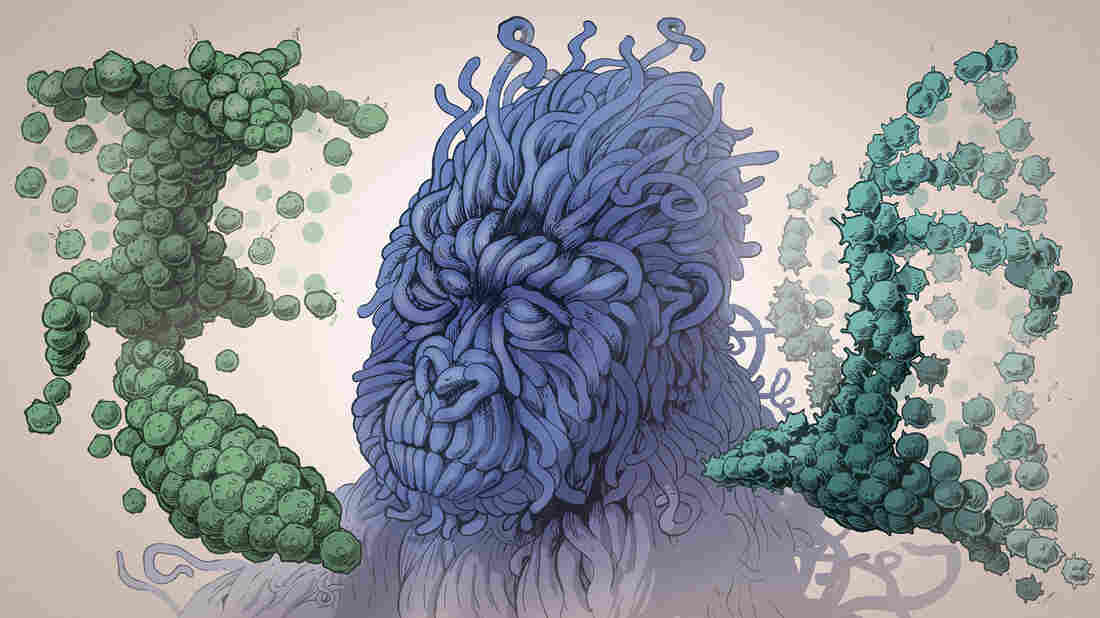 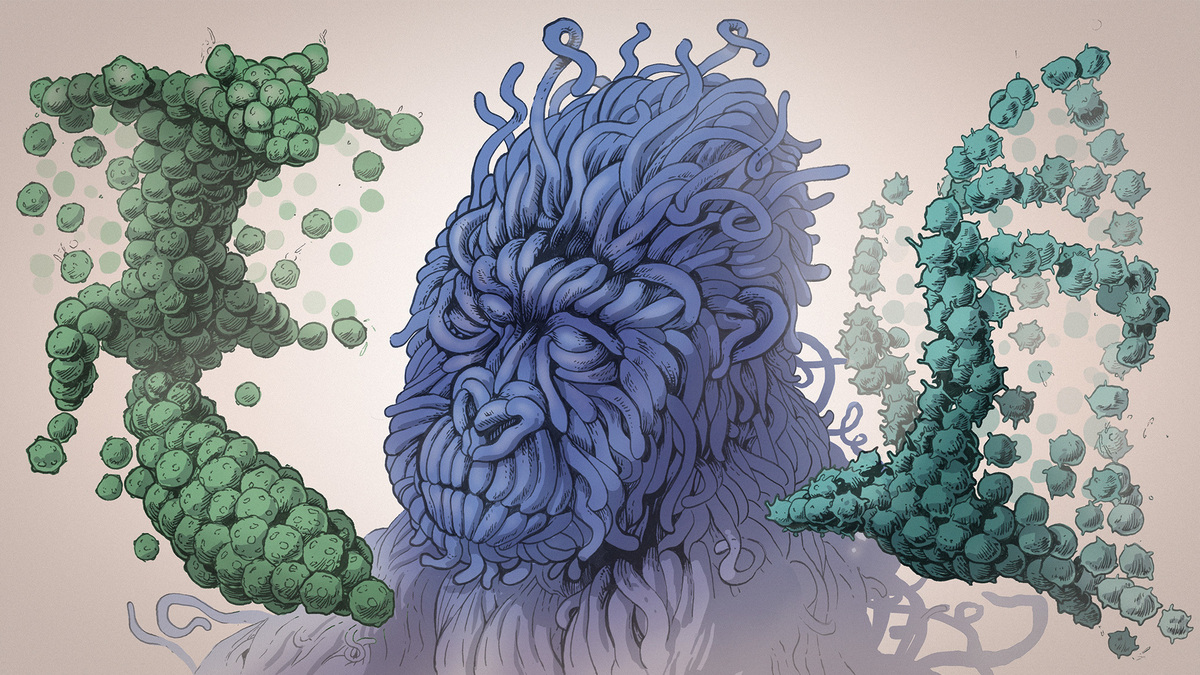 Eye-popping. That's the word that comes to mind when you hear how many viruses are likely hiding out around the world in animals.

"We expect there are hundreds of thousands of mammalian viruses out there," says Kevin Olival, a disease ecologist at EcoHealth Alliance, who led the study.

"Yes, it's likely," Olival says. "Any given mammal species is likely to have 20, 30 or even 100 viruses. When you add that up around the planet, you get a big number."

The good news is that not all those viruses can infect humans. We have only detected a fraction of them. And only a tiny, tiny fraction are likely ever to be a public health problem. 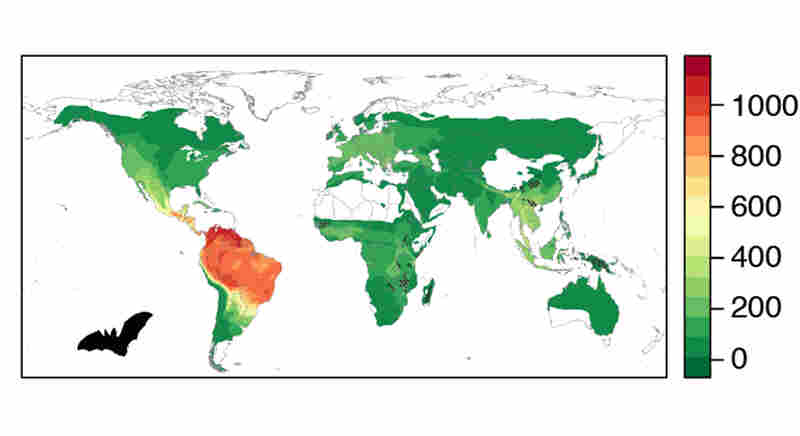 Bats are among the animals carrying viruses that have not yet infected humans but have potential for spillover — particularly in South and Central American and parts of Asia. On the color scale on this map and the two maps below, the warmer colors represent a greater risk of viruses jumping into people and green shades show a lower risk. Courtesy of EcoHealth Alliance hide caption

So how do you know which ones are harmless and which ones we should be concerned about?

Olival and his colleagues have taken a few steps to start answering that question.

In the journal Nature, the team offers the most comprehensive view to date of where viruses are hiding around the globe and which species are most likely harbor risky ones. 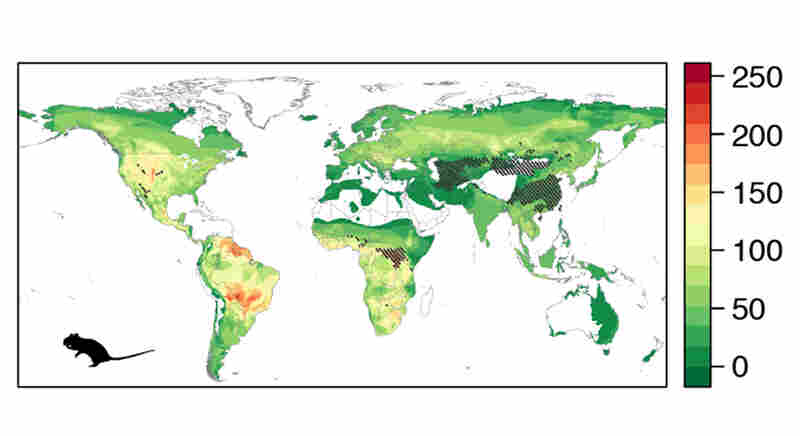 Viral hotspots for rodents are in some parts of North and South America, as well as in Central Africa. Courtesy of EcoHealth Alliance hide caption

The study, published Wednesday, also estimates how many "missing" viruses are out there in the world — viruses that we know are in animals and can possibly jump into people, only we haven't detected them yet. 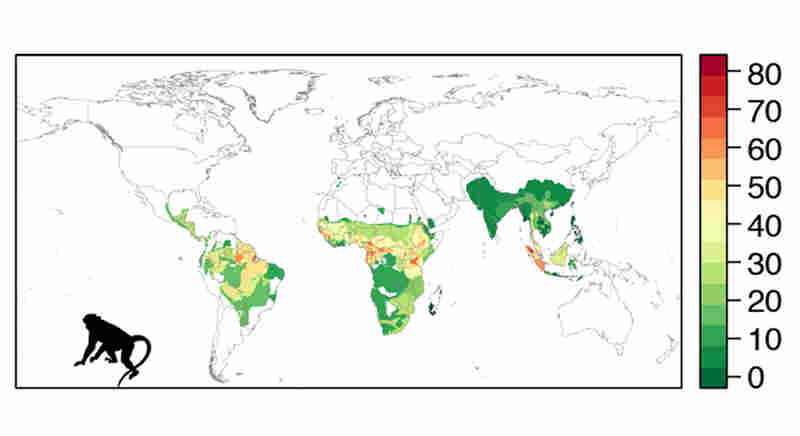 Hotspots for primates are in the tropics, including large parts of Central Africa and Southeast Asia. Courtesy of EcoHealth Alliance hide caption

To do that, he and his team scoured studies and databases to create a list of all known viruses in mammals on Earth. They ended up with nearly 600 unique viruses found in about 750 species.

About a third of the viruses had the ability to jump from mammals into people. These are called zoonotic viruses. Bats, primates and rodents carry the largest proportions of zoonotic viruses, the study found, with bats edging out primates for the No. 1 slot.

The researchers found two factors that likely boost the chance an animal transmits a virus to people: how closely related the animal is to humans and how much time that animal spends in urban areas.

"So we think our closest relatives, such as chimpanzees, are going to be higher risks," Olival says, "And so will animals that come into contact with people often."

They also found that the more promiscuous the virus — that is, the more species it can infect — the more likely it is to end up in people.

Olival and his team then used this viral catalog to start predicting where unknown zoonotic viruses are likely hiding.

"Most of them are in the tropics," Olival says. For instance, bat viruses are concentrated primarily in South America, where there's a high diversity of bat species. Primate viruses are mostly in central Africa and patches of Southeast Asia.

And here in the U.S., it's all about the rodents. "North America is not exempt from zoonotic viruses," Olival says, "although sometimes we like to think so."

Specifically the researchers predict there's a high-risk zone of rodent viruses on around the Rocky Mountains. And this finding actually matches up with results from a study back in 2015, which predicted a hot spot for rodent viruses in Nebraska and Kansas.

So what does this mean for people living in the middle of the country? Should they stay away from rodents?

"I wouldn't go snuggle up with a rodent. But I wouldn't be afraid," says Barbara Han, a disease ecologist at the Cary Institute, who led the 2015 study on rodent viruses.

Because, she says, we're still far from predicting whether a particular animal virus is dangerous for people.

Most of these "missing" viruses have likely been circulating in the animals for centuries, even thousands of years, and not causing any problem.

But communities should keep these virus hot spots in mind when they make plans to expand, Han says.

"For example, if we're interested in tearing up a bunch of pristine habitat in the Midwest, we should just know that there are a lot of rodent species there," she says. "If you put a bunch of humans into that habit, then, of course, you're going to get disease spillover."

Even when the risk of an outbreak is low, the consequences can be huge if it does happen — just as we learned with Ebola in 2014.