Accessibility links
Chibok Girls And Trump Appear In Unannounced Photo Op : Goats and Soda The meeting with two of the schoolgirls who'd been kidnapped by Boko Haram was not promoted in advance. But it led to a White House "photo of the day." 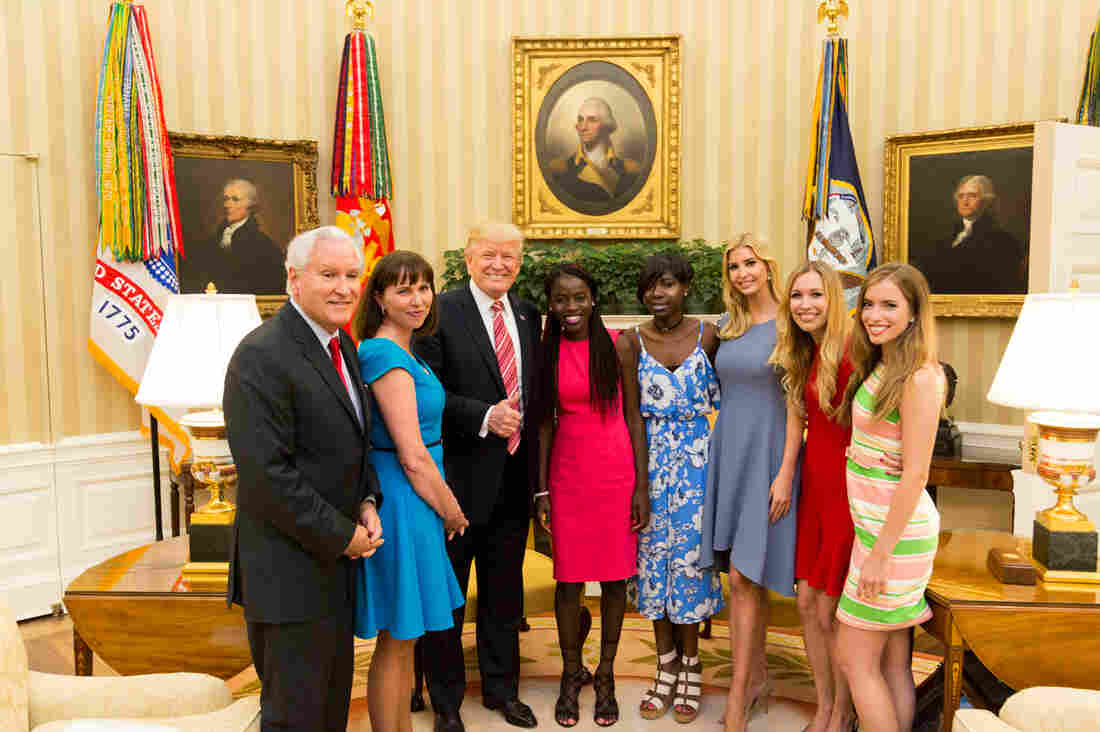 President Donald Trump and his daughter Ivanka flank Chibok schoolgirls (left to right) Joy Bishara and Lydia Pogu. At far left is Doug Wead, president of the school the girls attend, and his wife, Myriam. Two of his daughters are at the right. This White House "Photo of the Day" was taken on June 27. Shealah Craighead/White House hide caption 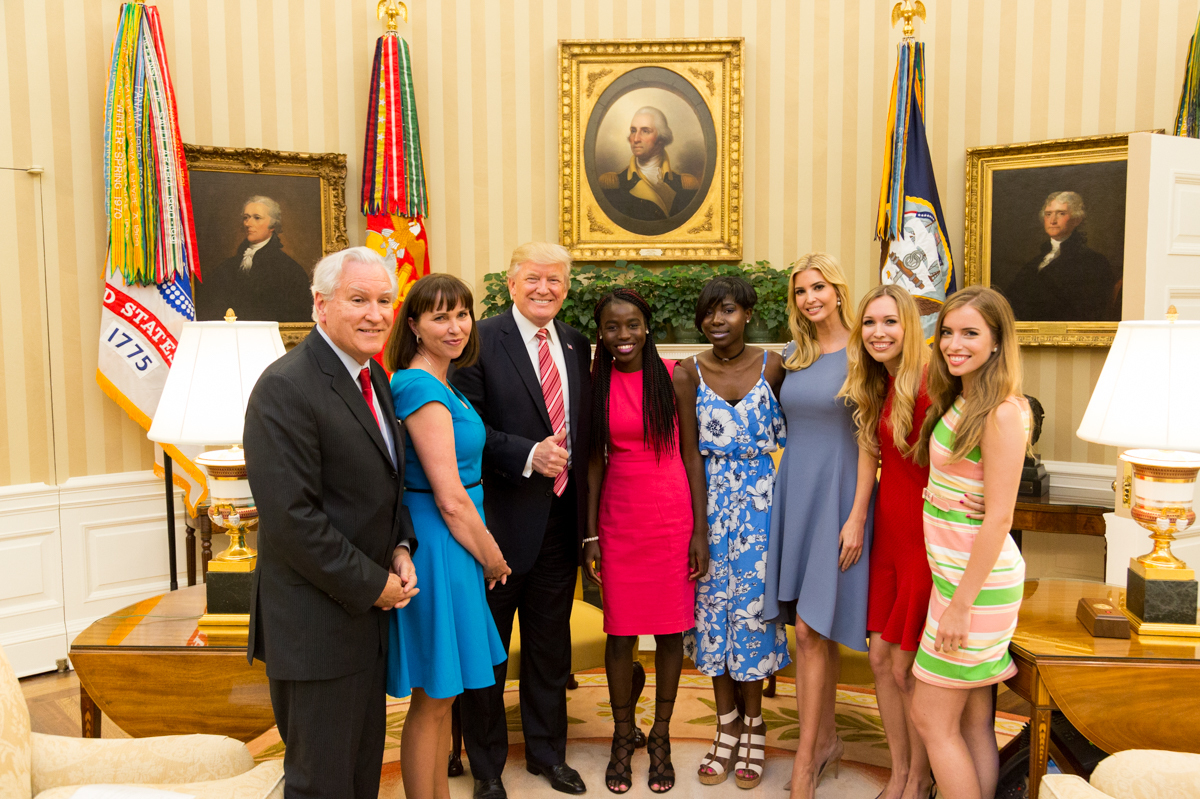 President Donald Trump and his daughter Ivanka flank Chibok schoolgirls (left to right) Joy Bishara and Lydia Pogu. At far left is Doug Wead, president of the school the girls attend, and his wife, Myriam. Two of his daughters are at the right. This White House "Photo of the Day" was taken on June 27.

The White House usually picks a photo of the day. On June 28, the image they chose showed two girls from Nigeria who were abducted in 2014 by Boko Haram but managed to escape: Joy Bishara and Lydia Pogu. They're flanked by President Donald Trump and his daughter, Ivanka Trump. The photo had been taken the day before.

Trump is giving a thumbs up.

The meeting was not publicized in advance. NPR's White House correspondent Tamara Keith says the administration didn't notify the press corps about it, it didn't appear on the White House daily schedule and it was not discussed in any of that day's briefings.

How did these two girls get to the White House? Doug Wead, who is also in the photo, was the point of contact.

He's the president of Canyonville Christian Academy, the Christian boarding school in Canyonville, Ore. that the girls just graduated from.

Wead was an assistant to President George H.W. Bush and has published many books, including Game of Thorns: The Inside Story of Hillary Clinton's Failed Campaign and Donald Trump's Winning Strategy. He told NPR that Ivanka Trump reached out to him after his appearance on a BBC program about presidential children. The two got in touch via email and kept in contact.

Wead asked her if she wanted to meet the girls because of her concern about human trafficking. She said "absolutely," Wead says.

Wead said the girls had some issues they wanted to discuss privately with the president, but neither he nor the girls would share details about what was said during the ten-minute meeting. Bishara did note that Ivanka hugged her and the President Trump smiled and said, 'God bless you, too."

And she and Pogu got a White House tour.

"I enjoyed [the visit], it was wonderful," she says. "Her [Ivanka's] work is a really good one, at least she's helping people around the world who have been hurt," Bishara says.

R. Evon Idahosa is a New York City-based organizer with Bring Back Our Girls, a campaign to free the captured Chibok girls. She says the purpose of the visit isn't clear. "The administration has taken an America-first approach. I'm not exactly sure what the intent of the meeting was," Idahosa says.

Idahosa is also the founder and executive director of the PathFinders Justice Initiative, a nonprofit organization.

She hopes the visit to the White House will raise awareness about the 113 Chibok girls in Nigeria still held captive by Boko Haram.

Pogu and Bishara were two of 276 schoolgirls in the town of Chibok captured by the extremists. They escaped by jumping off a moving truck that the extremists were using to transport them, the girls told People in an interview.

Boko Haram released 82 of the Chibok girls in May after more than three years of captivity. The group also released 21 of the abducted schoolgirls in October 2016. One student escaped with her baby in May 2016.

Pogu and Bishara began attending Mountain Mission School in Grundy, Va., in 2014. They had been connected to the Virginia school through the Jubilee Campaign, an organization based in Fairfax, Va., that promotes human rights and religious liberty for ethnic minorities in countries that include Nigeria.

Wead says that in 2016, the U.S. government asked Canyonville Christian Academy to take the girls in and cover all their expenses. The school granted them a full scholarship, including room and board.

At the academy, Pogu and Bishara "would study nonstop," says the school's CEO, Corinne Burkhert.

Pogu struggled to sleep at times because of "bad dreams" she says.

The girls plan to start college at Southeastern University in Lakeland, Fla. this fall on full scholarship, spokeswoman Dana Davis said in an email. The university is reaching out to local churches and individuals to raise more money for the girls. Three of Wead's children attended Southeastern, according to Davis.

The girls are temporarily staying in Haymarket, Va., with Doug Wead. They say he's like a father to them.

They hope to spend most of the summer in Nigeria with their families. To raise money for summer living expenses and plane tickets to travel home, Bishara and Pogu started a GoFundMe account on June 8. So far they've raised more than $5,800. The girls aren't sure how much money they'll need in total, but the goal is set to $35,000, covering tickets that they say will cost about $3,000 and travel expenses within the country to reach their families.

Canyonville Christian Academy currently manages the girls' fundraising account and states that all donations "in their entirety" will go to the girls.