Accessibility links
Dengue Fever Cases Top 100,000 In Sri Lanka's Outbreak : Goats and Soda A dengue fever outbreak has left some hospitals so full that they're turning away patients. 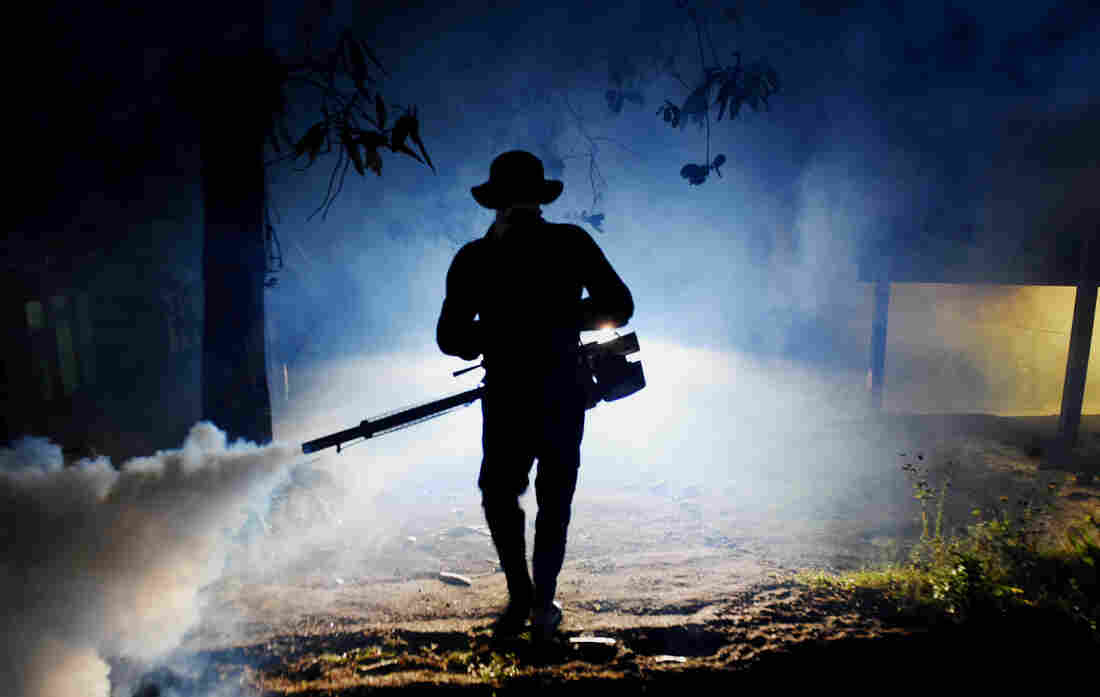 A worker fogs a neighborhood on the outskirts of Colombo in Sri Lanka in an effort to ward off mosquitoes. The country is facing an outbreak of dengue fever, a mosquito-borne disease. Ishara S. Kodikara/AFP/Getty Images hide caption 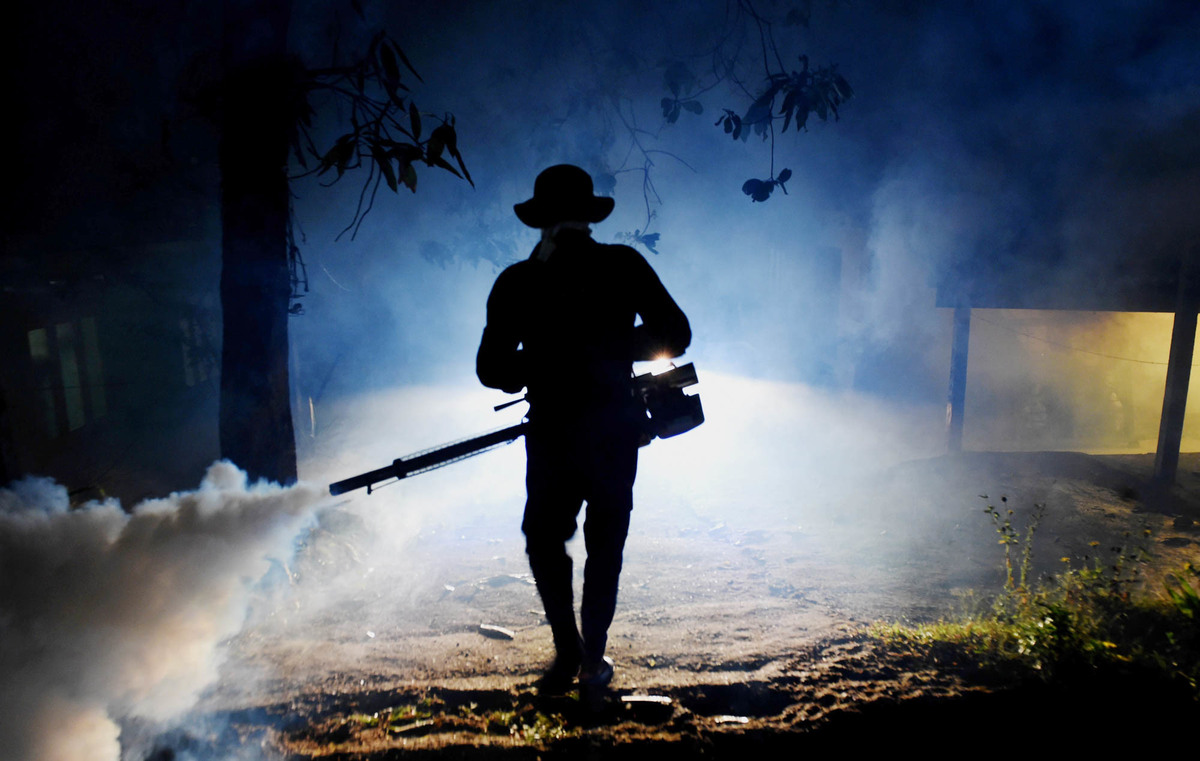 A worker fogs a neighborhood on the outskirts of Colombo in Sri Lanka in an effort to ward off mosquitoes. The country is facing an outbreak of dengue fever, a mosquito-borne disease.

Sri Lanka celebrated its eradication of malaria last year. But now the country faces another mosquito-borne illness: dengue fever. It's also sometimes known as "breakbone fever" because of the severe pain it can cause.

A dengue outbreak has left some Sri Lankan hospitals so full that they're turning away patients, says Gerhard Tauscher, an operations manager with the International Federation of Red Cross and Red Crescent Societies. He is based in Colombo, the capital of Sri Lanka.

More than 107,000 suspected cases of dengue have been reported so far this year, according to Sri Lanka's ministry of health.

That's almost twice the number of people diagnosed with dengue in Sri Lanka last year. The death toll from this outbreak is about 300 people, the IFRC says.

"Some of the hospitals are completely overwhelmed," Tauscher says, describing a typical scene: "It's a big ward, sometimes with many beds, and people are just squeezed in. It's a place [where] I wouldn't want to be sick."

In an effort to accommodate more patients, some hospitals have converted maternity wards and other sections into temporary dengue wards, he says. Some of his colleagues who got dengue had to go to two or three hospitals before they could get treatment.

Why such a big outbreak now? It's complicated.

Part of the problem: Flooding earlier this year in more than half of Sri Lanka's districts affected 600,000 people and left behind standing water, according to the World Health Organization.

Mosquitoes can turn a relatively small amount of water into a habitat. Even empty yogurt containers and the inside of tires can collect enough water to provide a place for mosquitoes to breed, Tauscher says.

"We need to eradicate the breeding grounds," he says.

The Sri Lanka Red Cross has been sending teams of volunteers to the areas most affected by the outbreak to check for mosquito breeding grounds around residents' homes, including flowerpots and gutters.

Trash left in the streets can also make it easier for dengue to spread. WHO cites "public failure to clear rain-soaked garbage" as one of the reasons why more cases have been reported in urban and suburban areas of Sri Lanka.

Almost half of the cases of dengue have been reported in the Western Province, where the capital is located, according to a WHO report.

Tauscher says there were a few cases of dengue on his street, where about 50 people live.

"Everybody's really alert, sleeping under mosquito nets," he says. "But the mosquito [that spreads dengue] is a daytime biter."

Preliminary lab results show that the strain of dengue primarily responsible for this outbreak is DENV-2. It has been "infrequently detected since 2009" in Sri Lanka, according to WHO.

Because DENV-2 isn't common in Sri Lanka, even people who've had dengue before might not be immune to that strain, says Tauscher.

Once people are infected with one of the four principal strains of dengue, they have lifetime immunity to that strain. But if they get one of the other strains, they could end up with a more dangerous condition called severe dengue, characterized by severe abdominal pain, rapid breathing and bleeding gums.

It's not so unusual for spikes in the number of dengue cases to occur, says Derek Cummings, a professor in the department of biology and the Emerging Pathogens Institute at the University of Florida. He has researched dengue in Southeast Asia.

"Dengue can show these swings in incidence where you get four, five, six, seven times as many cases in one year than you did the last," he says. "These sorts of big outbreaks are really disruptive to health systems."

The number of reported dengue cases around the world has been on the rise in recent decades , and dengue is on WHO's list of neglected tropical diseases. WHO says that diseases on this list pose a "devastating obstacle" to health and interfere with poverty reduction efforts but haven't received enough attention or resources. These "neglected diseases" more often cause long-lasting disability or disfigurement than death.

Improvements in recording dengue cases partly explains the sharp increase in the number of cases worldwide, says WHO — but the disease has also been expanding to new areas.

Not all cases are reported, according to WHO. The organization estimates that globally, 50 million to 100 million people are infected with the mosquito-borne virus each year, mainly in Asia. The number could be even higher — a recent study estimated the annual number of infections at 390 million.

Up to half of people infected with dengue don't show symptoms, according to the Centers for Disease Control and Prevention.

Those who do show symptoms experience fever, headaches, abdominal pain and nausea, and often get rashes. There's not much that can be done for treatment other than keeping the patient hydrated and comfortable.

"A cousin of my wife is still down with dengue, she's really knocked out," Tauscher says. "She's really weak, in bed and can't lift her head."