Accessibility links
The Bangalore Police Department Is A Smash Hit On Social Media : Goats and Soda They're doing it with memes from Game of Thrones and The Simpsons. And by quickly responding to queries from the public.

This Police Department Is A Smash Hit On Social Media

This Police Department Is A Smash Hit On Social Media 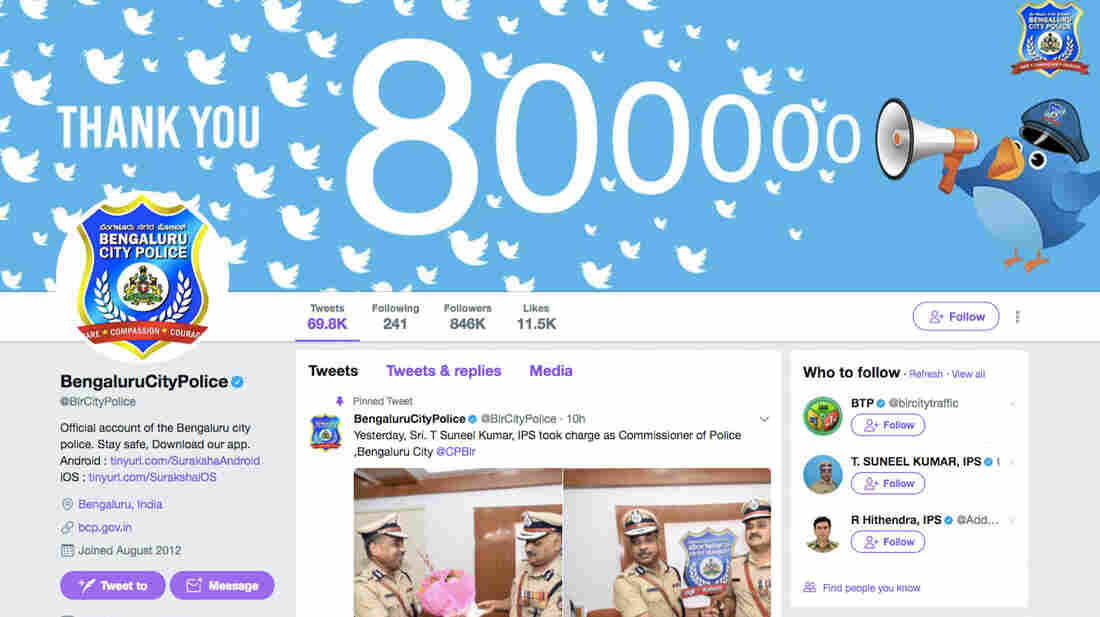 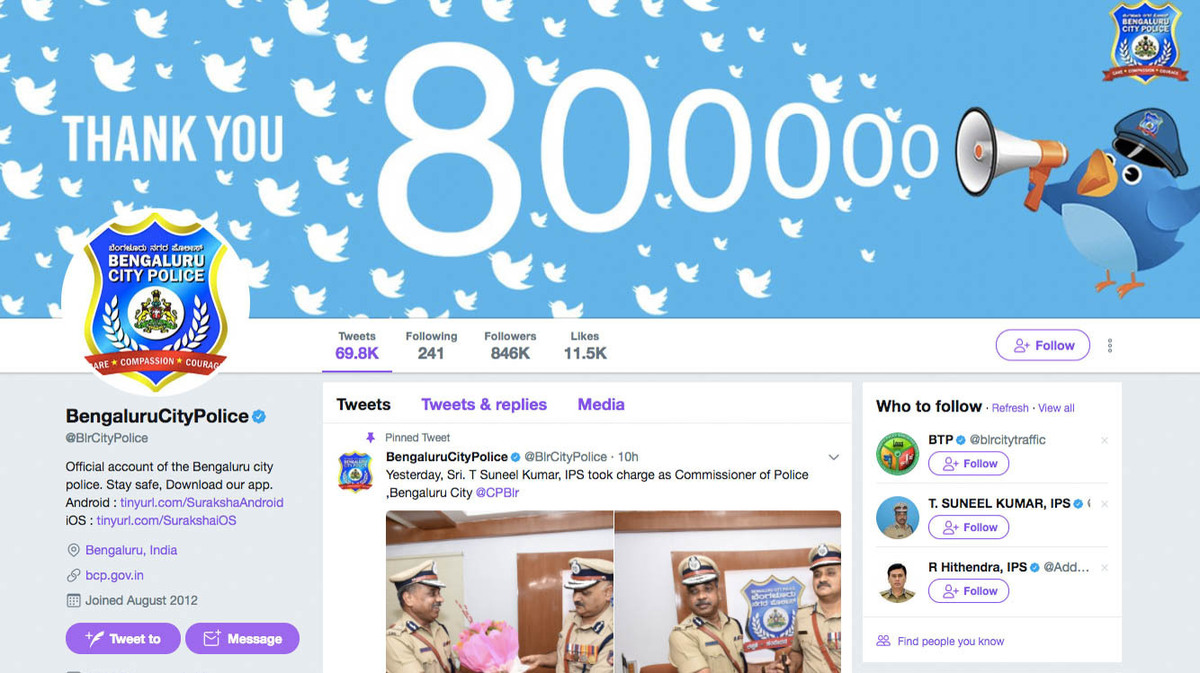 And it's all because they took the risk of partnering up with a hip outside consultant.

Last September, when riots broke out in Bangalore city, the best way to get real time information about rerouted traffic, burning buses and violent mobs was via social media.

And the best source? Turned out to be the Bangalore City Police, who were surprisingly active — and effective — on both Facebook and Twitter. They posted updates and information on road blocks and gave out emergency numbers for hospitals and police stations.

Back then, human resources professional Sundaram followed them because, "at that point I found them useful." And he stuck with them: "There was no reason to unfollow them and I thought 'maybe for an emergency.'"

Then about three months ago, he noticed an "unexpected" change in their social media style. The police had tweeted an anti-drug peddling PSA with a meme from Narcos, the Netflix show about Colombian drug cartels!

That tweet marked the shift in tone from dry information dissemination to tongue-in-cheek humor that has become a hallmark for the police department's social media account. That's the reason for its popularity on Facebook as well as Twitter, where it has gained 300,000 new followers since Krowd Cart Media started pitching in. In the third most unsafe city in India, according to national crime statistics, the police department is now hyperconnected with a local populace. And folks in Bangalore who are social media savvy seem charmed enough by the posts to reevaluate their image of police work as stuffy and boring.

"I thought it was pretty cool," Sundaram said. "I felt like the department isn't a bureaucratic entity. It's something like us that probably understands us. I've never heard of a government department doing anything like that."

That's a positive step for the Bangalore Police, who have been facing an image problem. They seemingly botched an investigation into mass molestations in the city over New Year's Eve, leading to vociferous outrage. They have also faced allegations of corruption and refusal to register complaints at police stations.

The new online approach is the brainchild of a small social media agency called Crowd Kart Media, run by Chethan Hiremath, 28, and Deeraj Gowda, 25, with the mandate to make Bangalore City Police more accessible and transparent on social media. They got the gig by cold-calling the department's in-house social media team "to tell them they're doing badly on social media and how we can help them fix it," says Hiremath. "I said, I hate to see my city's police failing so badly on social media. I've seen you working in rain, in the heat, making way for traffic, helping the elderly cross roads. But people only notice the negative things, like you're waiting to slam them with a fine."

Public perception, Hiermath pointed out, didn't reflect the good work the police did every day.

To his surprise, the police commissioner invited them in meet with him and the department's social media team. The whole office went along on the field trip. "Nobody likes the police, yeah? But once we visited we were impressed," says Hiremath. "It's super-organized, not like the movies depict. The amount of effort they're putting in is incredible. After that, I wanted the public to know and believe that our cops are amazing."

They suggested using quirky, youthful themes. The cops agreed. The Crowd Kart Media team now makes daily public service announcements with pop culture references from TV shows like Game of Thrones and The Simpsons. Posts about arrests, safety and traffic are given the once-over by the police before they're published online. The in-house team handles emergencies and advice about filing complaints, reporting theft and other procedural matters.

Since they started, the Bangalore City Police twitter follower count increased from 500,000 to nearly 900,000. And they've got more than 600,000 Facebook followers — more than the LAPD, Washington Metropolitan Police Department, Boston PD and San Francisco (although the NYPD still beats them with more than 700,000).

When Bangalore's former Commissioner of Police, Praveen Sood, brought the Crowd Kart Media team on board in May, he immediately noticed a jump in engagement. "Nothing works to convey serious messages quite like humor," he says, adding that they've had lots of positive feedback on the new tone and topical posts.

Internally, there was no resistance to working with a civilian team, Sood says. "Our first objective in using social media was to tell the public about all the things we are doing for them in law and order, combating crime and citizen-centric services."

An equally important objective was empowering citizens to know what they can expect from police. For instance, the police has tweeted that they will have an emergency response vehicle to a crime scene within 15 minutes. "We've communicated it and this empowers citizens to demand it. If it is not done they can actually question us and we welcome it." These more serious posts are alternated with the funnier PSA's about riding motorcycles without helmets and how peddling drugs is definitely not a good idea.

The first tweet that went viral featured Pablo Escobar, the protagonist of Narcos. Netflix replied to the police by saying that the show's DEA agents Murphy and Pena might want to work for the Bangalore cops, sparking a clever little exchange that netted over 2,500 retweets.

"I really enjoy the posts, though I won't comment on their utility," says Sundaram, with a laugh.

Hemisha D'Silva, a yoga teacher who also follows the department on Twitter, isn't so impressed with the pop culture references but does like the timeliness of the police postings. "I like how they link recent happenings and make awareness messages out of them. The humor is sometimes a bit cryptic for me, but if it works for others, it's cool," she says. What has improved for her is the quick police response to inquiries posted on social media. "Earlier they were probably not that equipped to handle the amount of complaints and observations they got, but now they seem better." There is clearly a push to engage more with Bangalore citizens and perhaps the increased follower count and public scrutiny has helped make them more responsive, she suggests.

"My personal experiences with the police handles has been nothing but positive," D'Silva continues. "I had one of those fraud calls from "a bank manager" asking for [financial] details, I reported it to the police on Twitter. I was reassured and felt safe."

Sundaram says the way the police are responding to the public is new to him. "I have never heard of a situation like this where the police answers questions not from the press but the people themselves. The perception I have is that if something is seriously going wrong, it will get picked up and there will be some action around it."

The police social media team isn't resting on its laurels yet. They are already on to the next challenge: sharing police news and PSAs with an even younger audience on Snapchat, used mainly by 13- to 25-year-olds according to Crowd Kart's Hiremath. It's to increase outreach and awareness — and they promise not to snoop on their followers.