Accessibility links
Vulture 'Restaurants' In Nepal Are Good For The Endangered Birds — And For The Local Economy : Goats and Soda The number of vultures in South Asia has plummeted. But "restaurants" to feed rescued chicks and wild vultures are good for the birds — and for the local economy.

People In Nepal Used To Think Vultures Were Bad Luck. Not Anymore

People In Nepal Used To Think Vultures Were Bad Luck. Not Anymore 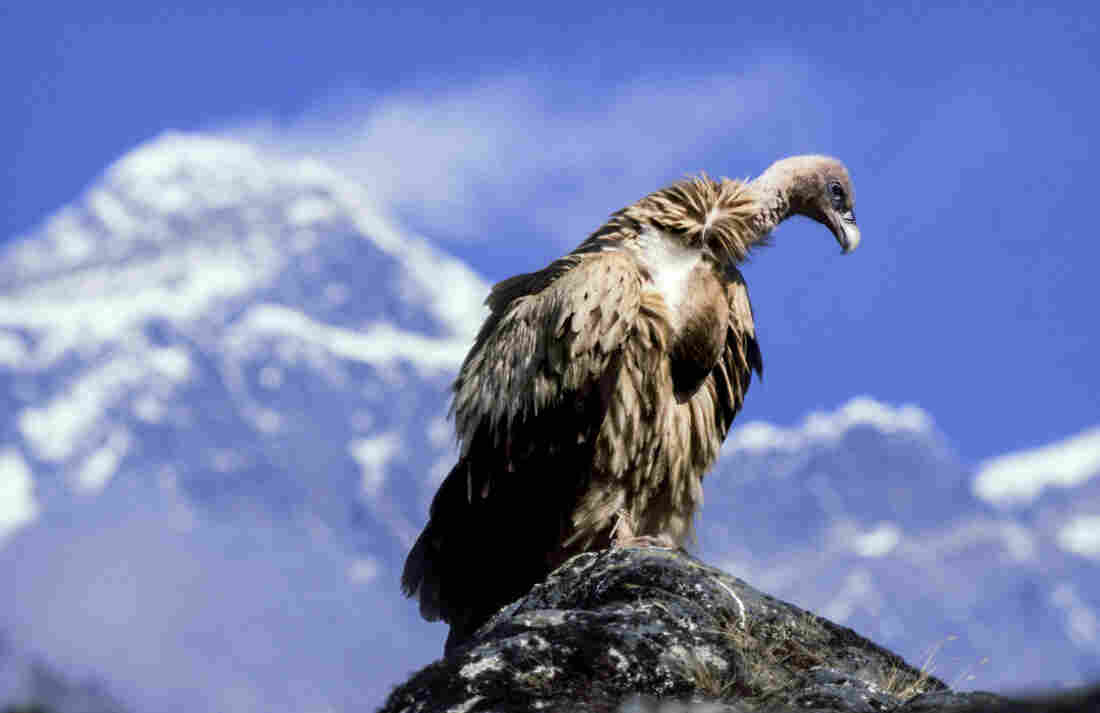 A Himalayan griffon vulture perches in the mountains. Nepal is home to nine species of vulture, four of which are critically endangered. Mary Plage/Getty Images hide caption 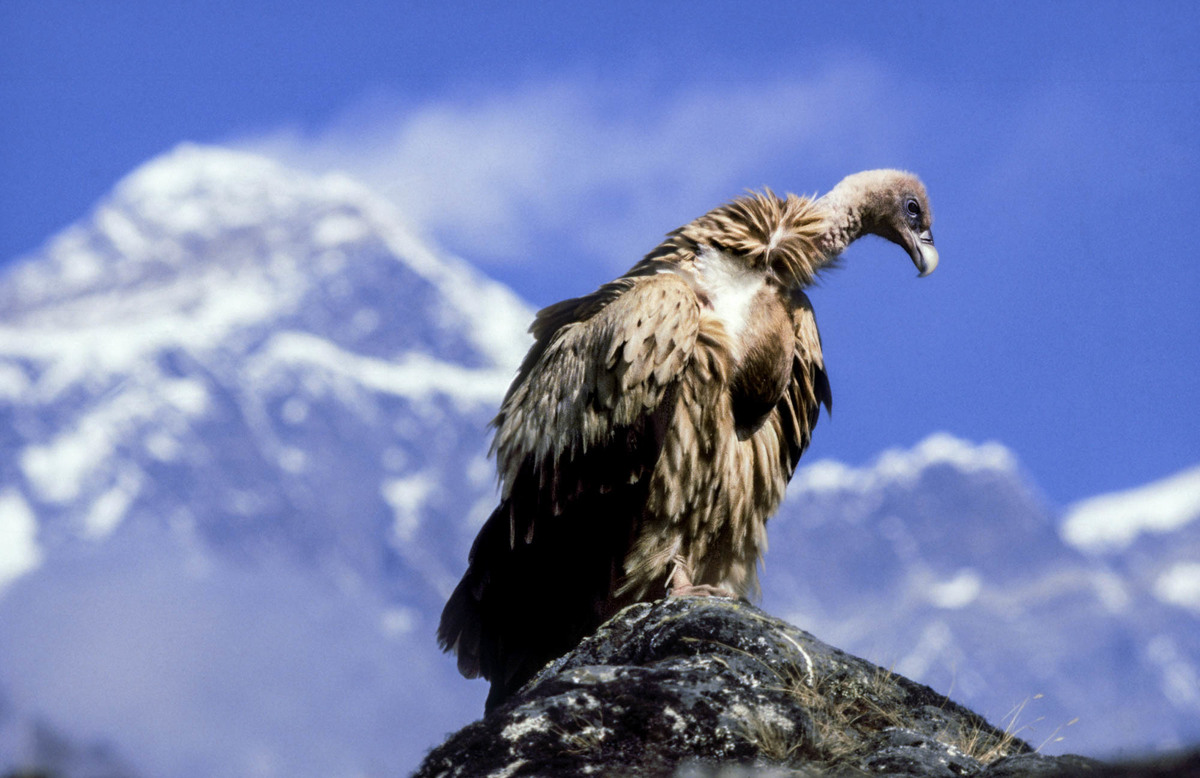 A Himalayan griffon vulture perches in the mountains. Nepal is home to nine species of vulture, four of which are critically endangered.

Three boys walk through a community forest in the village of Pithauli in southern Nepal. One kicks a soccer ball, the other two carry a goat leg in each hand.

They're on their way to feed white-rumped vulture chicks orphaned after a recent hailstorm.

Vulture "restaurants" have sprung up in Nepal over the past decade to offer safe food to the endangered birds, which lost more than 99 percent of their species population across South Asia over about a decade. The restaurants house and raise rescued vulture babies — and also offer food to wild vultures.

Vulture restaurants are not new. The first ones emerged in Europe in the 1970s, when vulture populations there started dying out due to habitat loss and lack of food. Nepal launched its first in 2006, in Pithauli, and the country now has seven.

Nepal is home to nine different species of vulture, four of which are critically endangered.

The drop in the white-rumped vulture population is "one of the fastest declines that we've ever seen in a species before," says Natasha Peters from the Royal Society for the Protection of Birds, a British organization that largely funds the Pithauli vulture restaurant.

What lead to the decline? 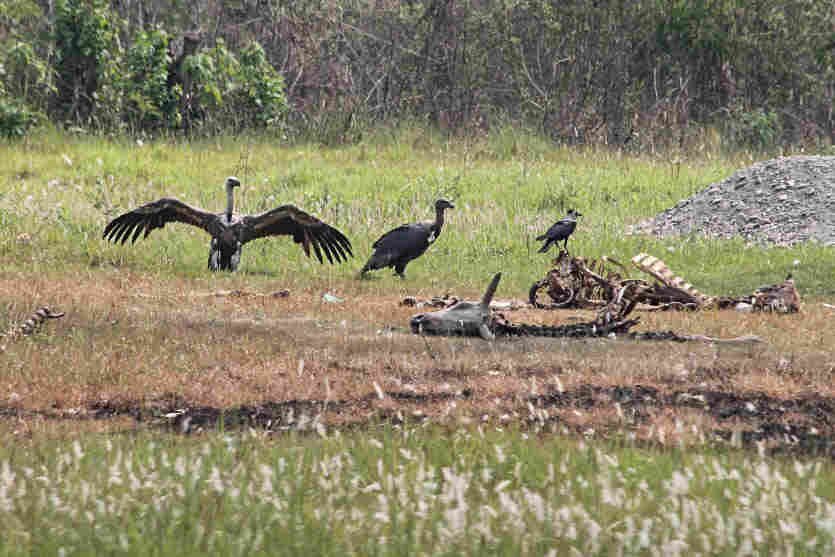 Vulture "restaurants" in Nepal provide safe food for the endangered species of vultures there. Danielle Preiss for NPR hide caption 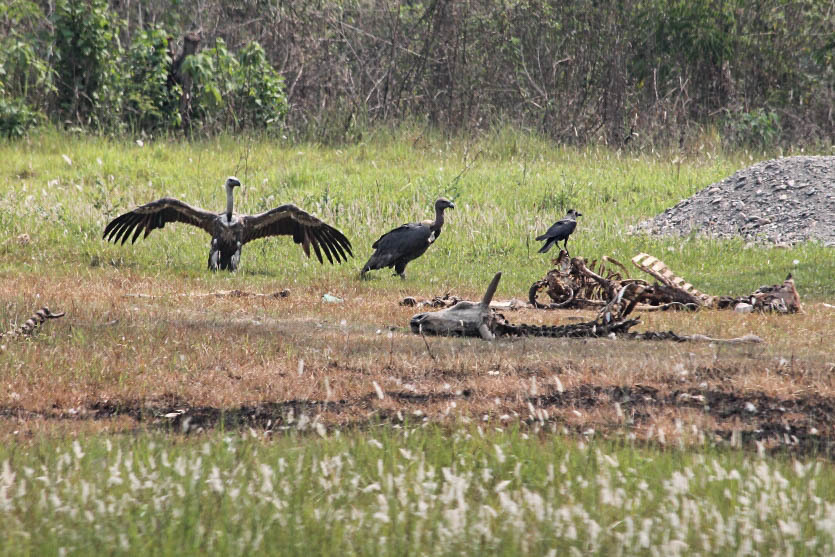 Vulture "restaurants" in Nepal provide safe food for the endangered species of vultures there.

Peters says scientists think the decimation is from an anti-inflammatory drug used in cows, called diclofenac.

Birds that have eaten carcasses of cows laced with the drug have died of kidney failure. In countries with a Hindu majority like India and Nepal, most people don't eat beef and there's not much of an animal disposal system. So when cows used for dairy or plowing die, they're left until vultures take over.

Vultures play a crucial role in sanitation, clearing bacteria and disease with the carcasses they consume. Peters says that in India the incidence of rabies even went up when vulture numbers started to drop. The wild dog population boomed with less competition for carrion from the scavenging birds. More wild dogs led to higher rates of rabies.

Diclofenac was banned in Nepal, India and Pakistan in 2006. But by that time the vultures were on the verge of extinction, and it would take years before the drugs were out of the environment.

So Nepal started gathering vulture chicks from the wild as a last ditch effort to save them in captivity. The organization Bird Conservation Nepal started a breeding center in 2008, where they hoped to keep the species alive until they could safely return birds to the wild.

"We had that breeding center because we thought they'll be completely wiped out from the earth," says D.B. Chaudary. He volunteers with Bird Conservation Nepal and is the man in Pithauli everyone credits with running the restaurant.

"Actually this is managed by the community, no one is from outside," Chaudary says. A 16-member board, made up of people from the community, makes all the decisions for the restaurant. Chaudary, the board's director, says he was enamored with the birds from a young age. But it took time to convince his neighbors to feel the same way.

"They used to think vultures are very ugly creatures, they eat dead meat — and also some other reasons like people they think once they land on the top of the house it is very bad luck for them," he says.

Villager Sunita Musahar, standing outside church Saturday morning, says: "Before dads, grandpas used to say, 'Oh, you touched a vulture! Don't sit in this house, take a shower and then come inside.' You mustn't touch vultures, they eat cows, they used to say," she explains.

But now vultures are boosting the local economy. Tourists come to see them at the "restaurants" and pay a fee — 500 rupees (about $5) for foreigners, 50 rupees for domestic tourists. So people have changed their minds. The community boards members for the restaurant hope tourism will bring much needed money into the community — and that there will be other benefits from a growing appreciation of vultures.

Villagers used to graze their cattle in the community forest, but the overgrazing was depleting the grass and destroying the habitat of vultures and other creatures. So, Musahar says, the community enforced a grazing ban themselves.

"We'd carry our babies and take turns guarding the jungle," she says.

Now, there's an officially managed grazing rotation in place, and the villagers can afford to hire guards by selling grass, wood and other products from the forest.

To get villagers to be more receptive to vulture conservation, the restaurant has supported small livelihood projects, like cooperatively run fish ponds. Musahar and 25 other families jointly manage four ponds and share the profits of 150,000 rupees (about $1,460) a month. Musahar sends her kids to school with the money — a chance she said she never got — and she hopes it will set her kids up for an easier life.

"If we have a forest, and we have vultures, then national, international people come, and we benefit from tourism," Musahar explains.

So what's the biggest tourist attraction? Watching the birds eat.

"They eat a goat in 10 or 12 minutes," says Yam Bahadur Nepali, the restaurant's only "waiter." He manages the vulture's meals. The boys walking to the aviary with the goat legs are his sons.

Nepali's arm is speckled with the blood of a goat he just killed. Half the goat goes to the birds inside the aviary; the rest just outside to entice wild vultures so that the newbies can watch them and learn.

The vultures also eat cows. While slaughtering cows is illegal in Nepal, old, unproductive cattle become an expense many villagers can't afford. So Nepali takes care of them in a cow "retirement home" until they die naturally — and then Nepali prepares them for the vultures.

"I used to feel it was disgusting at the very beginning. But we have a saying in Nepali: 'As long as you don't have debts, who cares if your work is disgusting,'" Nepali says.

When Nepali feeds the birds tourists huddle in a wooden structure with tiny slits for peeking out, so the wild vultures won't be bothered. The aviary and restaurant — including a 65 foot by 25 foot cage and about 1,000 acres of land — have more than 1,000 visitors annually.

The caged birds hop off their perch and peck at the carcass, squabbling with each other over the meat. A while later, wild vultures swoop into a tree next to the cage, and eventually to the ground to work on their half. Crows join them. For over an hour the vultures hang out and watch each other through the fence until, finally, the wild ones fly off.

The latest annual vulture survey recorded a slight increase in the number of birds — up to 111 from 75 in 2016. But the survey can't tell how many vultures are actually in the country. The surveyors slowly drive a car east to west across Nepal over a ten-day period and count how many birds they see along that tract to compare each year.

While the numbers are promising, Pradhan knows there's a lot of work left to do.

Six white-rumped vultures were raised in captivity in Pithauli and are set to be released into the wild this fall. Once one of the most abundant birds of prey, they're now one of the most endangered species. For now, they're in a temporary cage in the jungle where they exercise their wings and learn how to survive by watching wild vultures.

Conservationists will be watching this first release of vultures in South Asia with careful optimism, hoping it will be a turning point.