Accessibility links
Why U.S.-Trained Surgeons Aren't Ready For Humanitarian Work Abroad : Goats and Soda A study compares surgeries performed by Doctors Without Borders volunteers in the developing world with those taught to U.S. surgical residents — and finds "a dramatic mismatch." 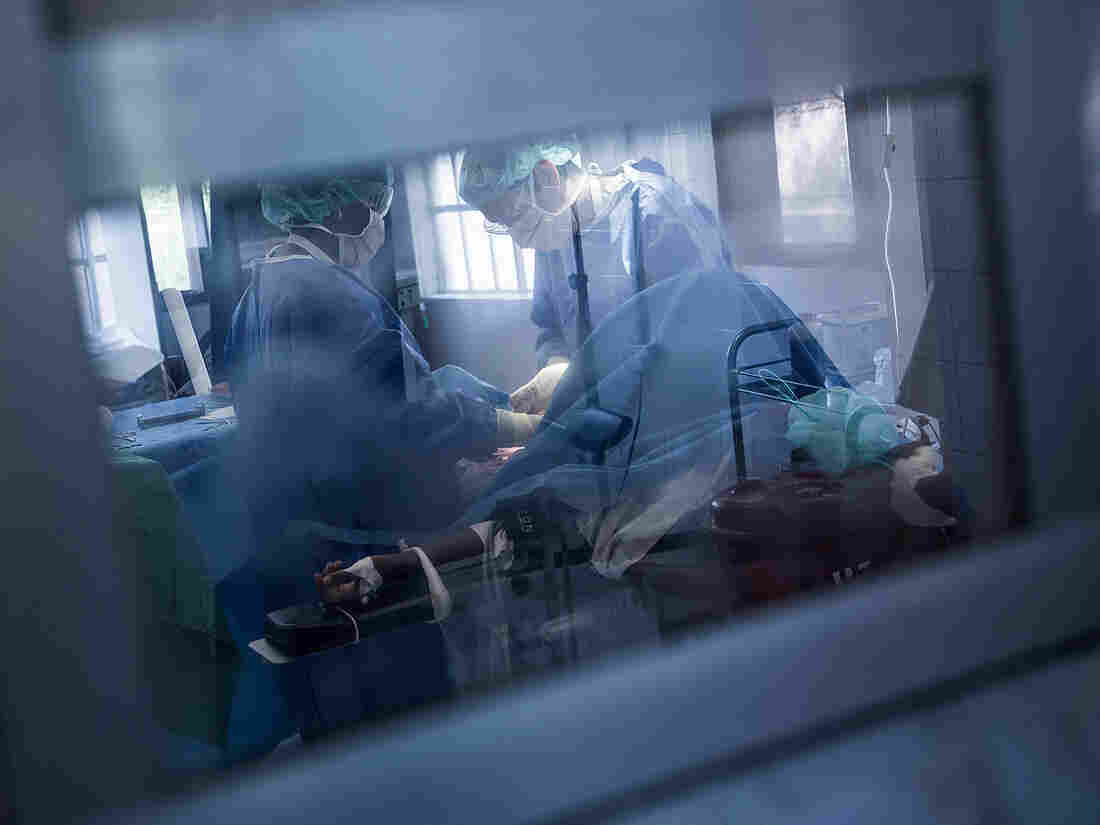 Health workers from Doctors Without Borders give emergency treatment to a newborn baby in Sierra Leone in 2014. Lam Yik Fei/Getty Images hide caption 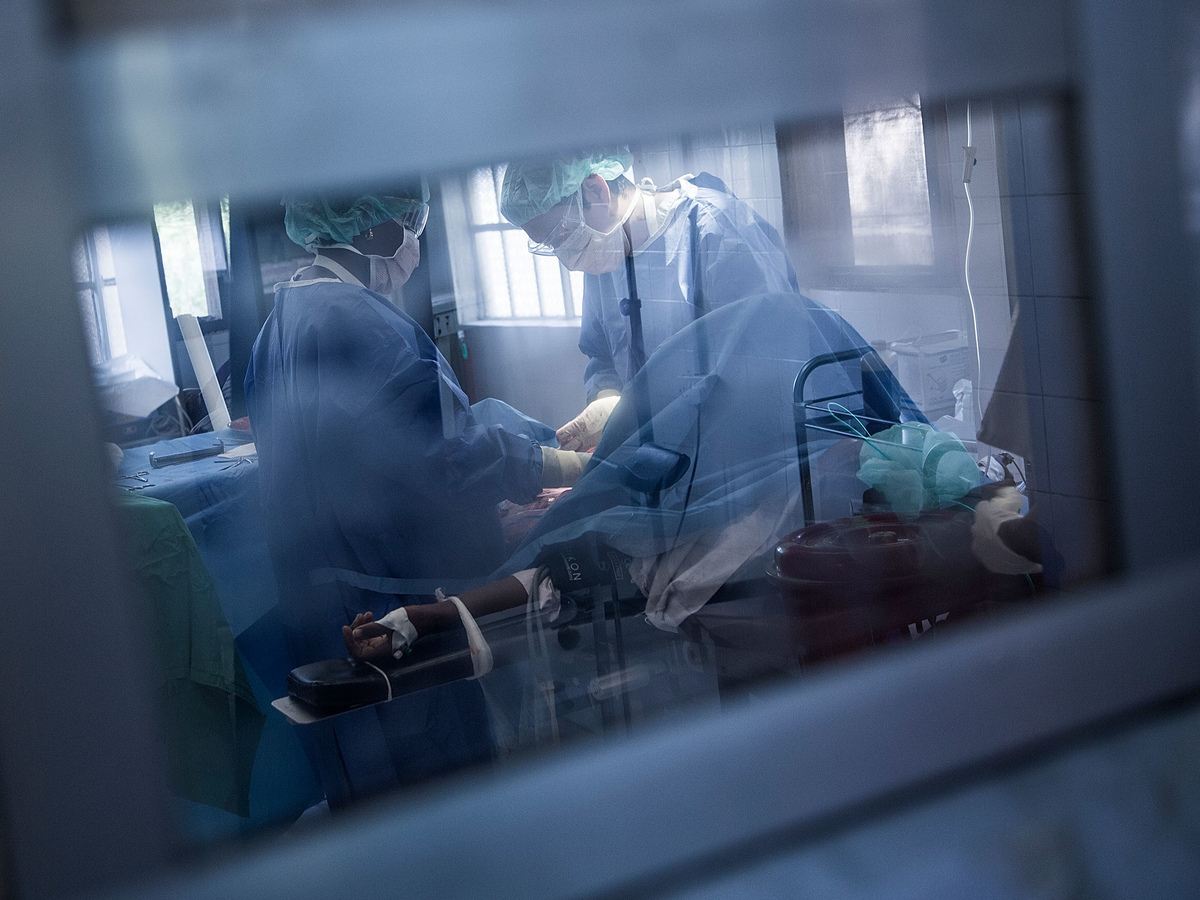 Health workers from Doctors Without Borders give emergency treatment to a newborn baby in Sierra Leone in 2014.

Many young American surgeons have a strong desire to do humanitarian work overseas. But their good intentions usually don't match up with the skills, such as performing cesarean section deliveries and fixing broken bones, that they'll need in poor countries.

And that means U.S. general surgeons, eager to do charitable work around the globe, may miss out on chances to help some of the world's neediest patients.

"I see all these young trainees," says Dr. David Kuwayama, professor of vascular surgery at the University of Colorado School of Medicine. "They're altruistic. They have open minds to the world, and they really want to do the work. But the opportunities for them to actually do it are becoming fewer and fewer."

Kuwayama is an author of a paper looking at the issue in the World Journal of Surgery that was published Aug. 4. Kuwayama and his colleagues analyzed 90,000 surgical cases performed by the physician volunteer organization Medecins Sans Frontieres, or Doctors Without Borders, and compared them with 1,328 cases that average U.S. surgical residents perform during their training.

"We were able to show a dramatic mismatch," says Kuwayama.

What poor countries need are surgeons who can do C-sections and hysterectomies, skills honed in the U.S. by OB-GYNs. But only 0.1 percent of general surgery residents in the study had been trained to do a C-section. Yet it's the most commonly performed surgical procedure in MSF projects.

"The need for C-section is extraordinary," says Kuwayama. That is because poor women are often malnourished. "Chronic malnutrition means women's pelvises don't develop fully, and the baby has trouble making it through the pelvic outlet to be delivered vaginally."

The developing world also needs surgeons who can fix a broken thighbone or a shinbone, skills largely under the purview of orthopedic surgeons in the U.S. Fewer than 2 percent of all general surgical residents are trained in orthopedic procedures.

"When I worked in the Democratic Republic of Congo, we had an entire ward of 40 patients recovering from long bone fracture," says Kuwayama. "It's pedestrians struck by cars or people falling off of motor vehicles because the roads are so poor."

And countries with few medical resources need general surgeons who can relieve urinary obstructions in men with enlarged prostates by placing a special tube through an incision in the belly, something perfected by U.S. urologists. But less than 1 percent of all U.S. general surgical residents have any training at all in urology procedures.

Why A Surgeon Taught A Non-Doctor To Do Brain Surgery

The skills necessary for work in the developing world used to be universally taught in American surgical rotations. But training has changed to reflect increasing specialization.

Dr. Sherry Wren, vice chair of surgery at Stanford University, first volunteered with MSF in 2006. "When I returned, I realized that modern general surgery training was really not preparing people for this kind of work," she says.

Thirty years ago, when Wren was a resident, surgical training was very different. "Those of us who trained in the past spent more time in surgical subspecialties including orthopedics, gynecology and plastic surgery," she says. "Doing surgery overseas is like turning the clock back 30 years."

To address the discrepancy, she developed the International Humanitarian Aid Skills Course at the Stanford Center for Continuing Education. The weekend course gives physicians an overview of the skills needed to work in poor countries. "I've been running this class since 2010, and every year, I have a waitlist," she says.

Other programs to help train volunteer surgeons for humanitarian missions, according to the World Journal of Surgery paper, include the American College of Surgeons' annual training program called Operation Giving Back, directed by Dr. Girma Tefera.

"We have a module developed by surgeons who have worked in low-resource settings," he says. "It looks at pregnancy complications, when a C-section is needed and how it's done. We have some hands-on courses on fractures and broken bones, on burns and skin grafts."

In addition, there are programs run by MSF in Dusseldorf, Germany, one offered by the Royal College of Surgeons in London, and the Humanitarian Surgical Skills Workshop at the University of Colorado.

"There is certainly a growing effort to address the mismatch," says Kuwayama. "But we need more. Every time we put out a call for our workshop, we're overwhelmed with applications. If I had my way, I'd train every person who applied. It's such a noble desire; I wish I could respond to all of them. But I don't have the financial or material resources to train all the people who want the training."