Accessibility links
With Threat Of More Mudslides, Sierra Leone Races To Find Survivors : Goats and Soda Idalia Amaya, an emergency response coordinator for Catholic Relief Services, says the top priority is rescuing people trapped in their homes under the mud. 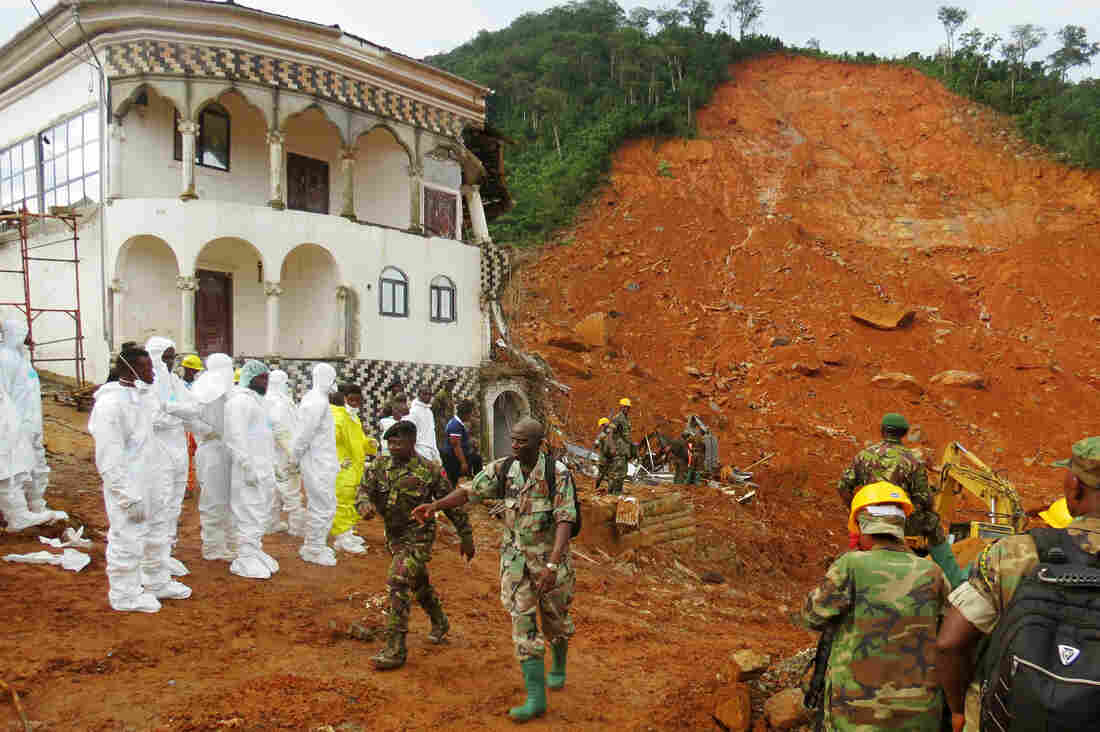 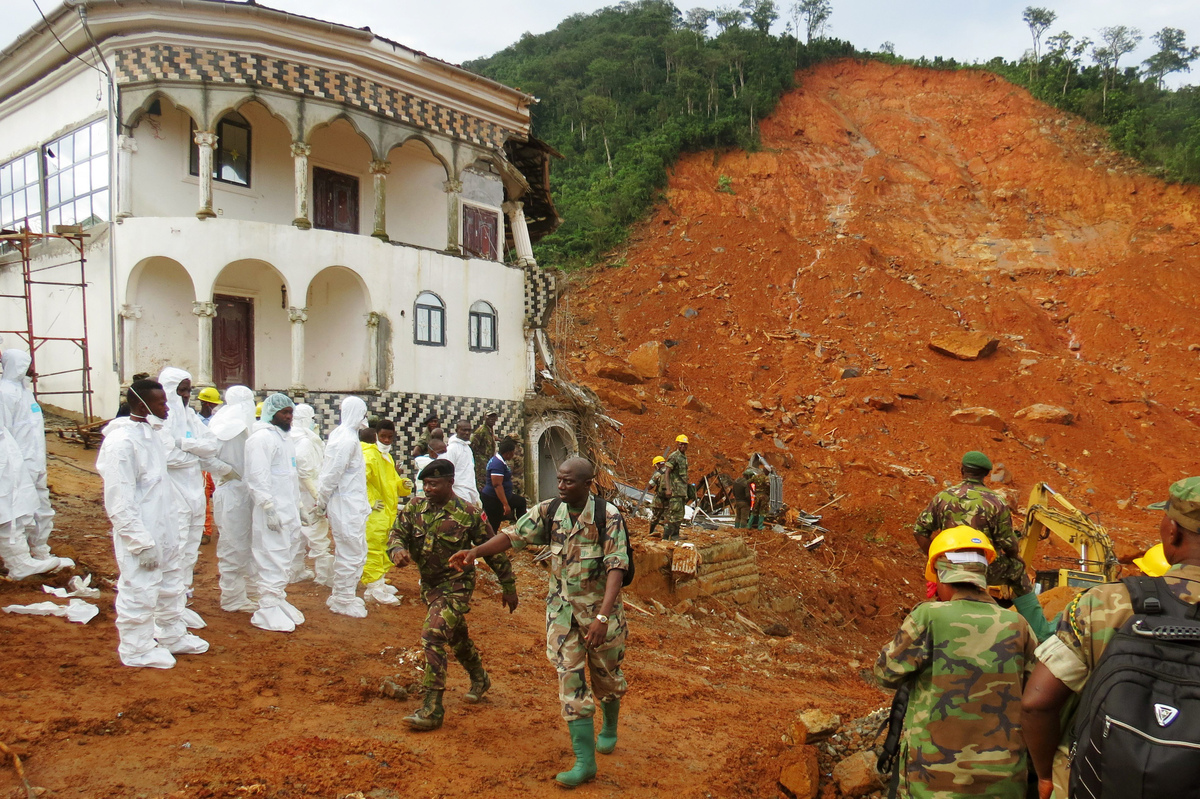 Search and rescue team members and soldiers work near a mudslide site and a damaged building near Freetown, Sierra Leone, on Tuesday.

Sierra Leone, a country that has been battered by Ebola, civil war and massive floods, suffered yet another tragedy this week. Government and international aid workers are racing the clock to find survivors after a mudslide struck capital city Freetown early Monday morning.

At the same time, aid groups are trying to support roughly 9,000 people — who were injured, displaced, or found their lives disrupted by the devastation — and avert a potential public health crisis.

To make matters worse, rain keeps falling and it is not expected to slow down until next month, raising the risk for more mudslides. As it is, hospital morgues can't keep up with the more than 200 victims' bodies so far. Health facilities are also struggling to keep up with the hundreds of people treated for injuries related to the mudslide.

The Sierra Leonean government leads the response and is working with nonprofit organizations to fill in the gap. Groups like Oxfam and UNICEF are helping to determine what people who lost their homes to the mudslide need. And the government asked Catholic Relief Services to help with burials.

NPR spoke with Idalia Amaya, the deputy head of programs and the emergency response coordinator for CRS in Freetown, about the ongoing rescue effort, the challenges faced by aid groups on the ground and how the Ebola outbreak that struck Sierra Leone in 2014 helped prepare for the mudslide response. This interview has been edited for length and clarity.

What is the biggest challenge right now?

The rain. August is the peak of the rainy season in Sierra Leone. The timing of this is really horrible because every day it is raining and it will continue through the end of the month. It makes the emergency response slower.

We are getting reports that family members are receiving text messages and calls from people trapped in the mud. They are still inside their homes that were swept away by the mudslide. Attempts to reach them are hampered because there is not enough equipment to dig people out, and the continued rain makes the operation dangerous for the rescuers. There are concerns that people will get trapped themselves.

How are aid groups like Catholic Relief Services dealing with the response? 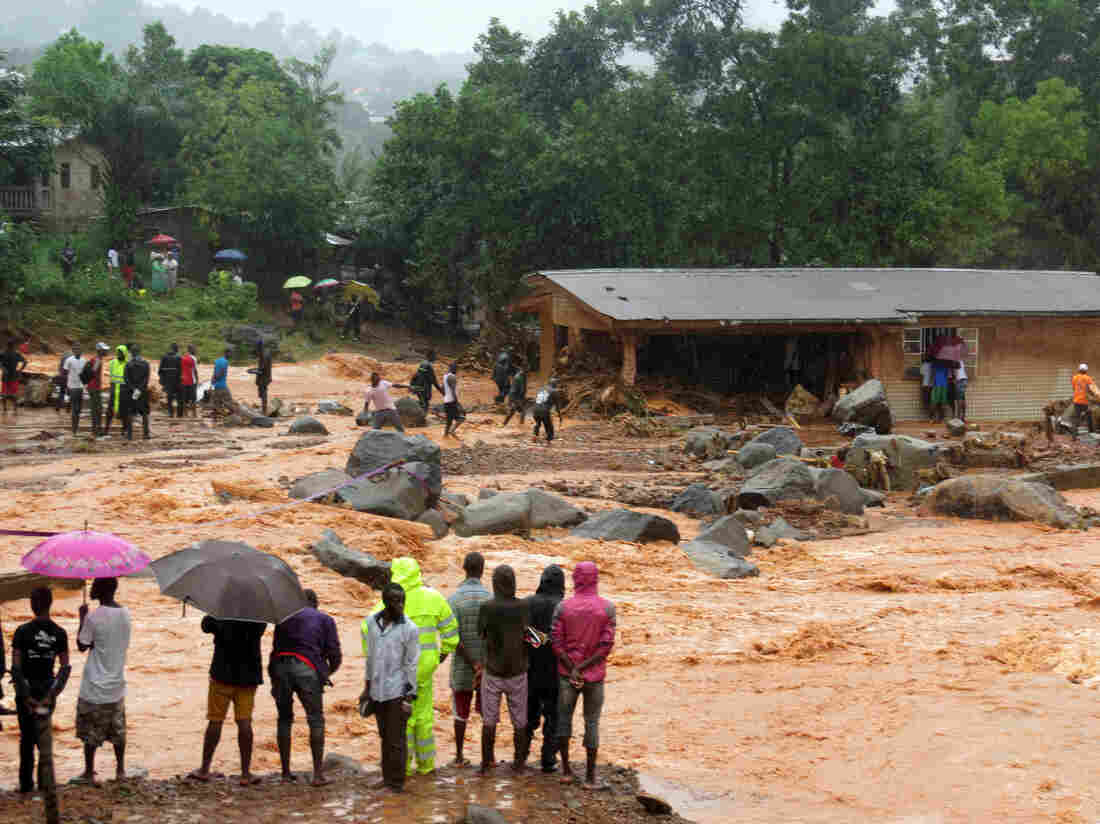 Being that Ebola happened a couple of years ago, there is a big international presence in the country. So it's a blessing in disguise because there are so many groups already here that can get the boots on the ground to get the immediate assistance of food, water, shelter, mattresses and more to people.

What lessons were learned from the Ebola response?

Instead of setting up a parallel system like was done during the Ebola outbreak, it is led and owned by the government. Of course, there have been some challenges, but the international community is ready to help. They identified the need for burial teams, so CRS stepped up and said we can fill that role.

Are there other problems caused by the mudslide?

Because the morgue and the central hospital has been overwhelmed with bodies, the bodies have been laying outside. The bodies are decomposing and fluids are streaming into public water areas. We need to do dignified burials as quickly as possible.

People are also trying to move the bodies themselves without the proper training, using regular gloves and aprons. Government health officials said cholera is a leading concern during an infection prevention control meeting, due to the fact that drinking water for thousands of people in Freetown is affected by the mudslide.

How do you balance dignity and urgency when performing the burials?

We don't want to retraumatize the community. There was an outcry when the mass graves were done during the Ebola outbreak and it became a public health hazard when people blocked the burials.

We are balancing it with a lot of education saying that we need to bury the bodies in a timely fashion and in a dignified way. We do that by making sure there is a religious leader accompanying the burial team to give the final rights to the individuals buried. It is also important that the president is expected to lead a funeral procession where some of the caskets are draped in the country's flag.

What makes you optimistic about Sierra Leone?

The people here have survived a civil war, Ebola, cholera outbreaks. Regardless of this tragedy and their religious beliefs, they are coming together as a community. People are waking up each morning and getting out to help each other each day since the mudslide. Here, they are strong and tall and they will survive.

Tom Murphy is a journalist focused on foreign aid and development. His work has appeared in Foreign Policy, GlobalPost, Humanosphere and the Guardian. Tweet him @viewfromthecave.