Accessibility links
Bubonic Plague Victims In Art Are Often Suffering From Leprosy — Or Not Depicted At All : Goats and Soda Many images that have been traditionally used to depict the Black Death are, in fact, not images of the plague at all. Now, a group of dedicated historians are trying to correct the record.

Many of the images we associate with the plague actually depict leprosy or smallpox. In fact, there are very few images of the Black Death from the time of the scourge.

A few weeks ago, I reported a story about three cases of the plague in New Mexico. The bacterial illness pops up fairly regularly around the globe but is now easily treatable with antibiotics, if caught in time.

The story ran with what we thought was an iconic image of the plague that was published in a Swiss Bible. 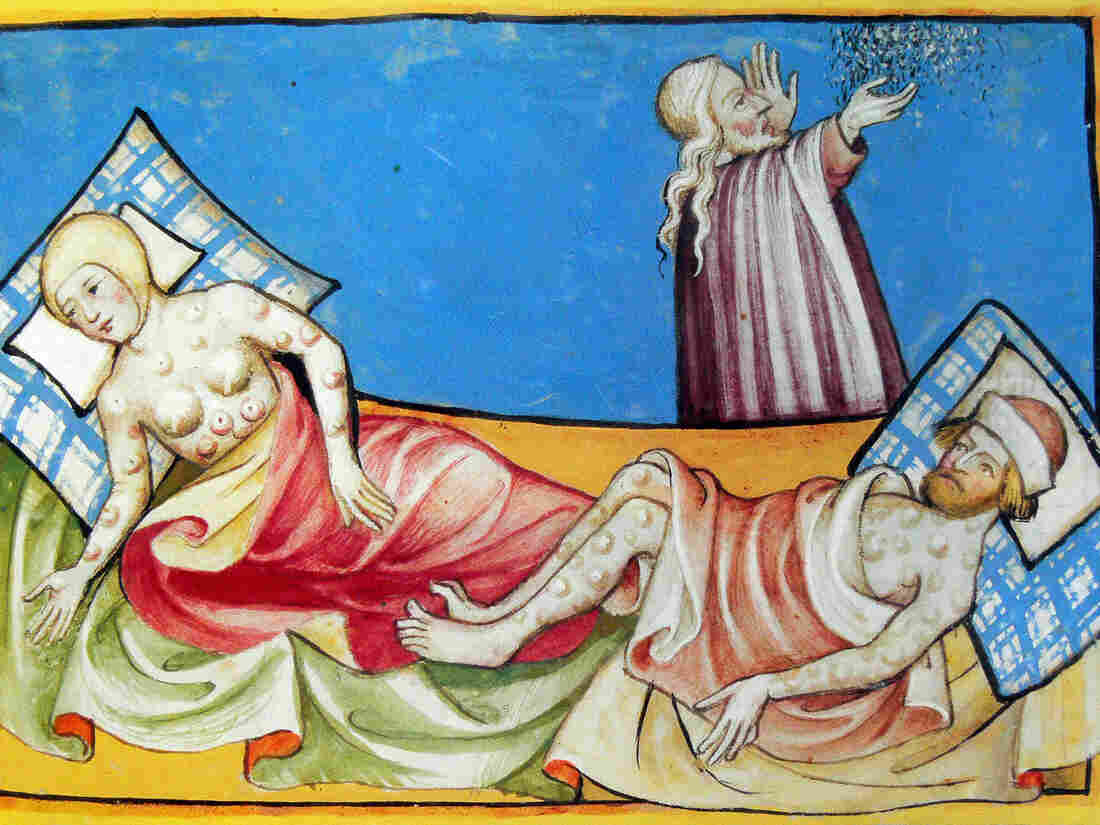 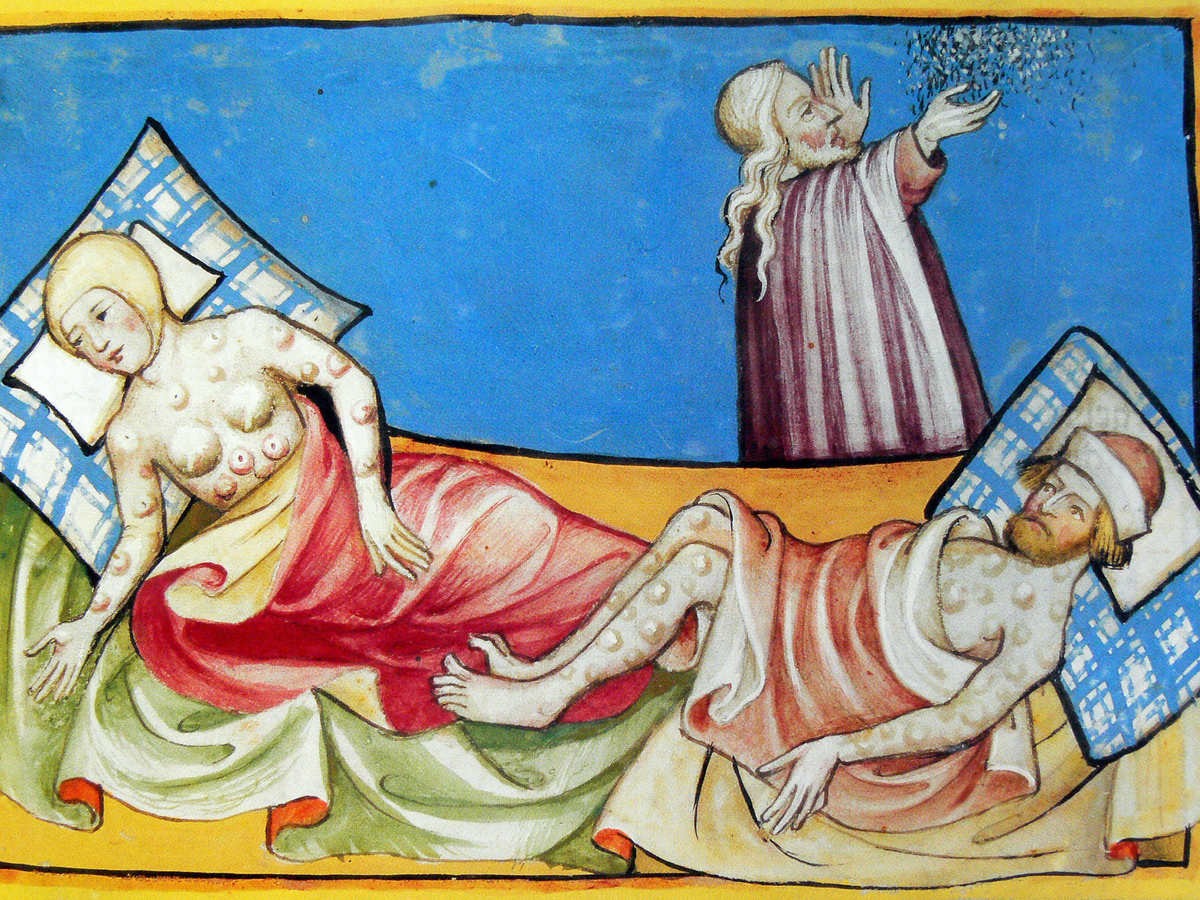 But, as historian Monica H. Green swiftly pointed out on Twitter, the image doesn't actually depict the plague. The patients shown are suffering from the sixth biblical plague and the curse of festering skin boils. So, we took the image down and replaced it with another iconic image of the plague, from a 15th-century Italian document. That one, it turns out, doesn't show the Black Death, either. It depicts leprosy. 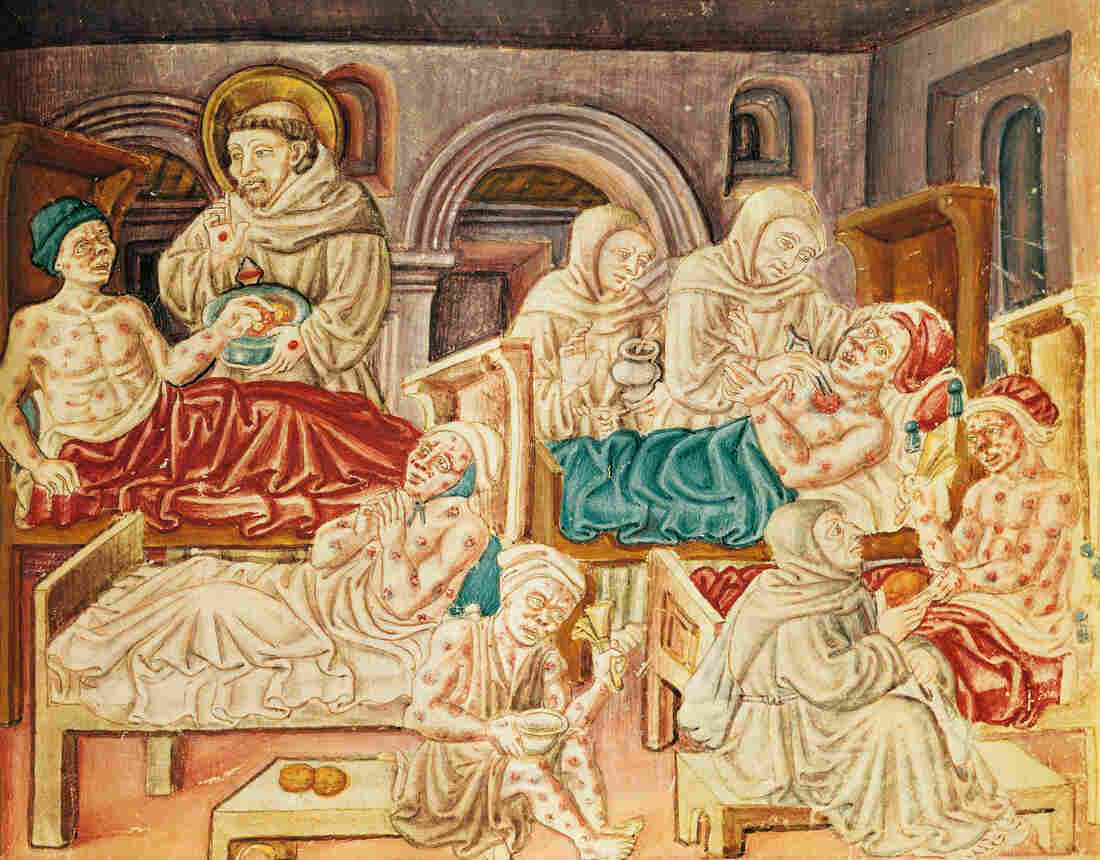 Strike 2: Our second attempt at illustrating the plague story — with what we said was a 15th-century image by Jacopo Oddi from the La Franceschina codex depicting Franciscan monks treating victims of the plague in Italy — is about leprosy. A. Dagli Orti/Getty Images hide caption 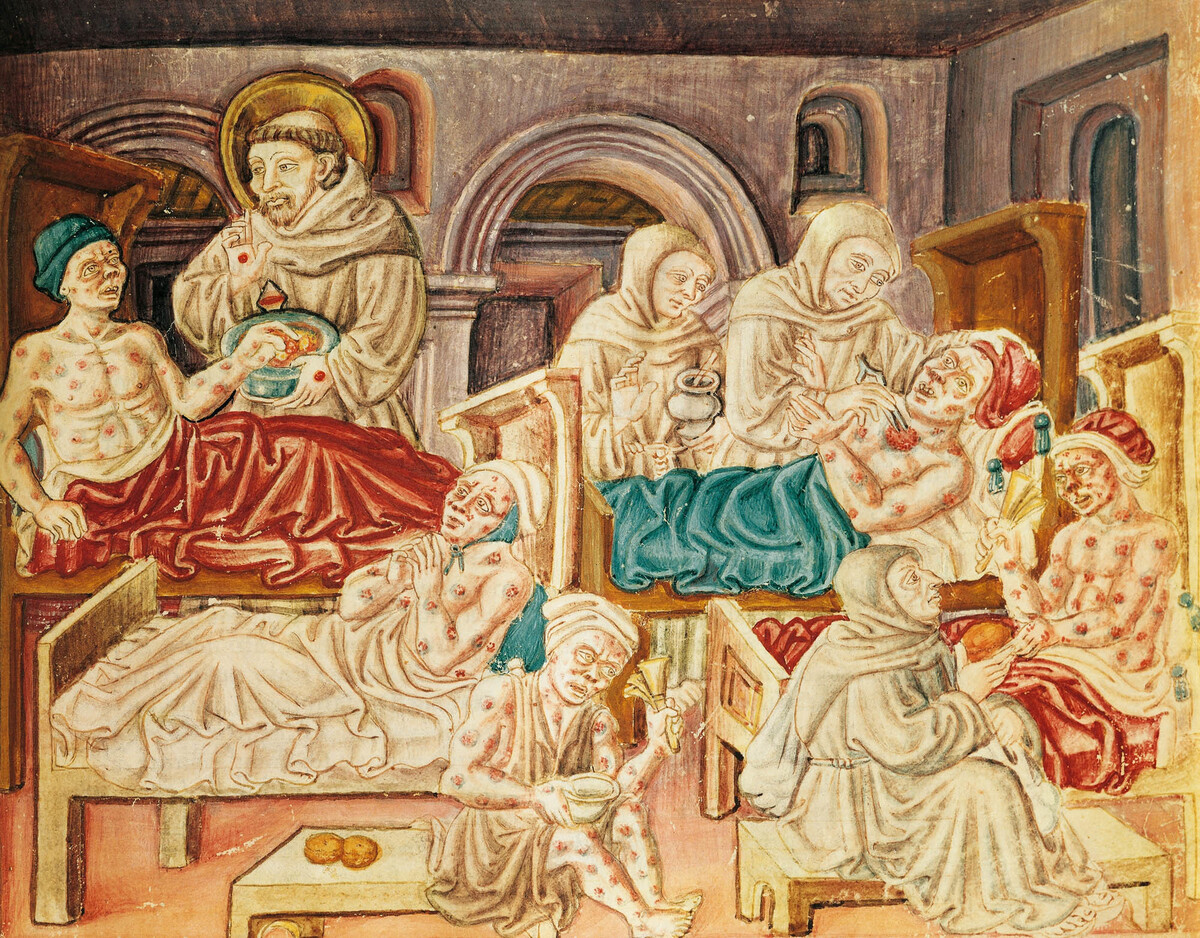 Strike 2: Our second attempt at illustrating the plague story — with what we said was a 15th-century image by Jacopo Oddi from the La Franceschina codex depicting Franciscan monks treating victims of the plague in Italy — is about leprosy.

"You and a lot of other people," says Green, a historian with Arizona State University.

As her colleague Lori Jones makes clear in the journal The Lancet Infectious Diseases, NPR is far from the first organization to make exactly the same succession of image mistakes.

"Most of the images we associate with plague are actually leprosy," says Jones, a historian of medieval and early modern medicine at the University of Ottawa.

Here's yet another iconic image from James le Palmer's Omne Bonum, a 14th-century encyclopedia. The image has been commonly mistaken as depicting the Black Death, including in an exhibit on the epidemic at the Museum of London in 2012. 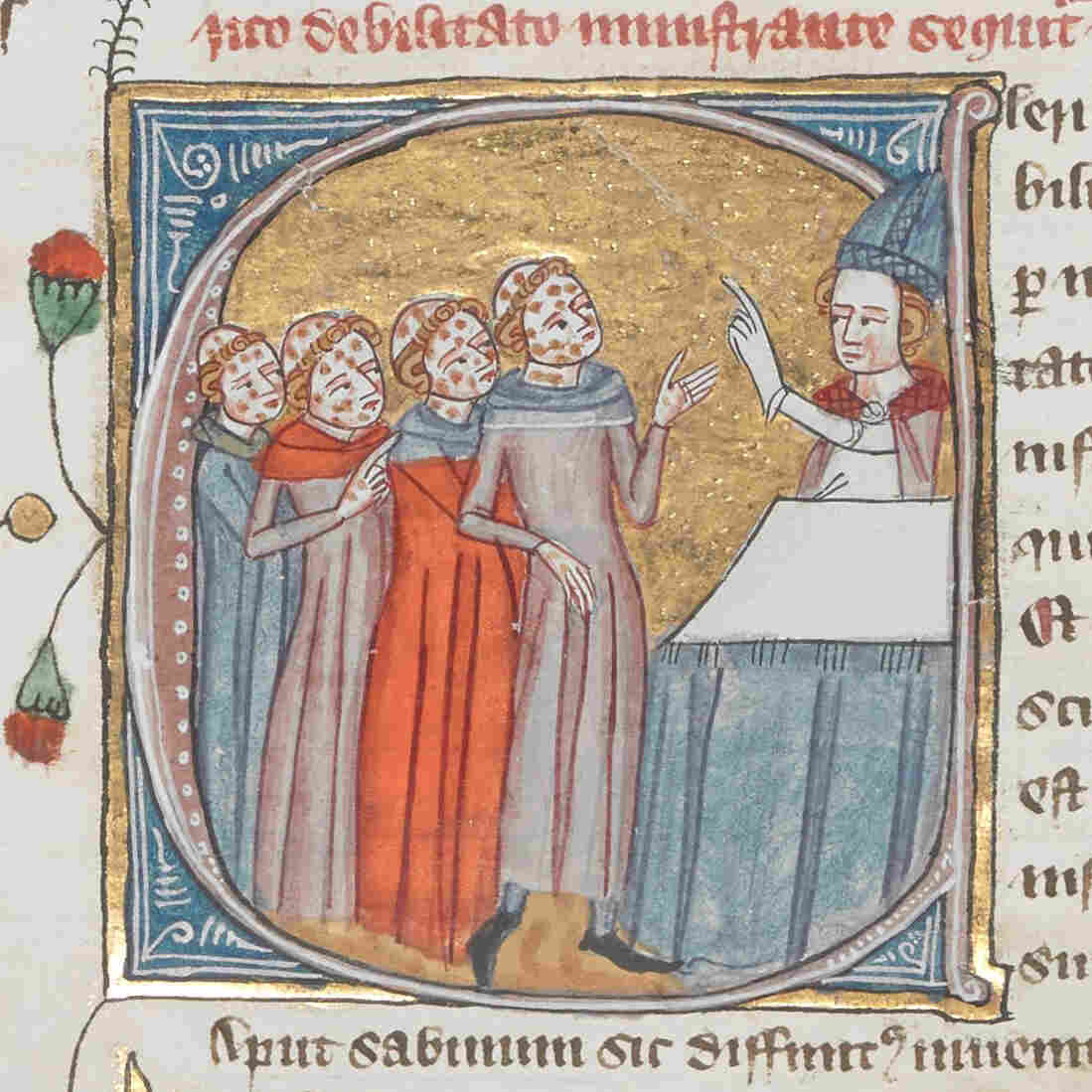 Historians like Jones and Green are trying to correct such mistakes with websites including NPR, the BBC, Wikipedia and, most importantly, in libraries and art resource databases, including The British Library and Getty Images, that distribute the images.

"It gives a misrepresentation of what the plague actually looked like and what people's experience was of it," says Jones.

It's easy to understand how it happened. A domino effect of misunderstanding, they say, likely originated with incorrect captioning by libraries and subsequently by art resource databases from which journalists purchase photos.

"In the pictures that have been mislabeled as the plague, we see in them what we want to see of the plague," says Jones. We see groups of victims mid-demise, covered in lesions, reaching up to the heavens for help that we know won't come.

Almost everything about that is wrong.

First off, there were a lot fewer spots involved. People in the mislabeled images tend to be covered from head to toe in red lesions. Some patients probably did get petechial hemorrhaging — pinpoint dark spots of blood under the skin. But today, as in the past, plague victims would only have had one bump on their bodies — a big swollen lymph node called a "bubo" close to where they were bitten by a flea carrying the infection.

This is not to say they looked good. They were probably sweating and shivering with fevers, and they supposedly smelled terrible, says Jones, "because their bodies were breaking down from the inside." But those aren't characteristics that would stand out in an illustration.

Second, while they certainly must have done their fair share of praying to the saints for recovery, they also knew much more about infectious disease than we give them credit for. Plague inspired the first known use of the quarantine, a word that comes from the Italian term for "40 days," the amount of time that ships had to stay offshore before anyone was allowed to set foot on the ground. It also inspired an early version of contact tracing, in which medical practitioners would search for neighbors and relatives who had been in contact with a plague victim and isolate them to prevent further infectious spread.

The incorrect images, Green says, scratch our plague itch. "They fulfill our image of infectious disease," she says, but they're wrong. "This is the big hoodwinking everyone has participated in."

So, what medieval illustrations actually do depict the plague?

"From what I've been able to find, there are no contemporary images of what the plague looks like," says Jones, the historian.

Between about 1347 and 1353, the Black Death wiped out an estimated 50 percent of the European population. It was horrendous. "People were terrified," says Jones.

You would think, Jones says, "that if this was such a major catastrophe, there must be drawings of it. But there aren't."

Those that do exist are in line with how we show terrible epidemics today — lots of social chaos and death, rather than a detailed focus on the disease and its symptoms.

One scene, in book written in the 1340s by a man named Gilles li Muisit, shows a scene of people carrying coffins of those who died during the Black Death. 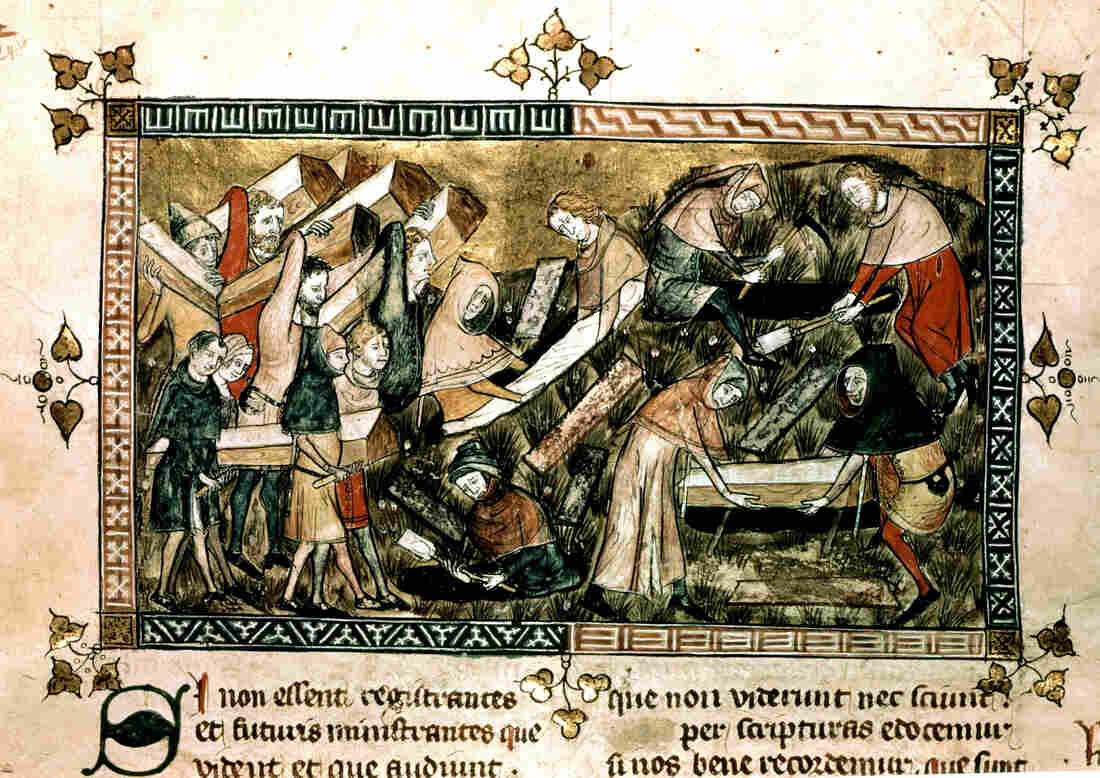 This is one of the earliest known images of the plague. Drawn in 1349, during the time of the Black Death, it shows people carrying coffins of those who died of the illness in Tournai, a city in what is now Belgium. UIG via Getty Images hide caption 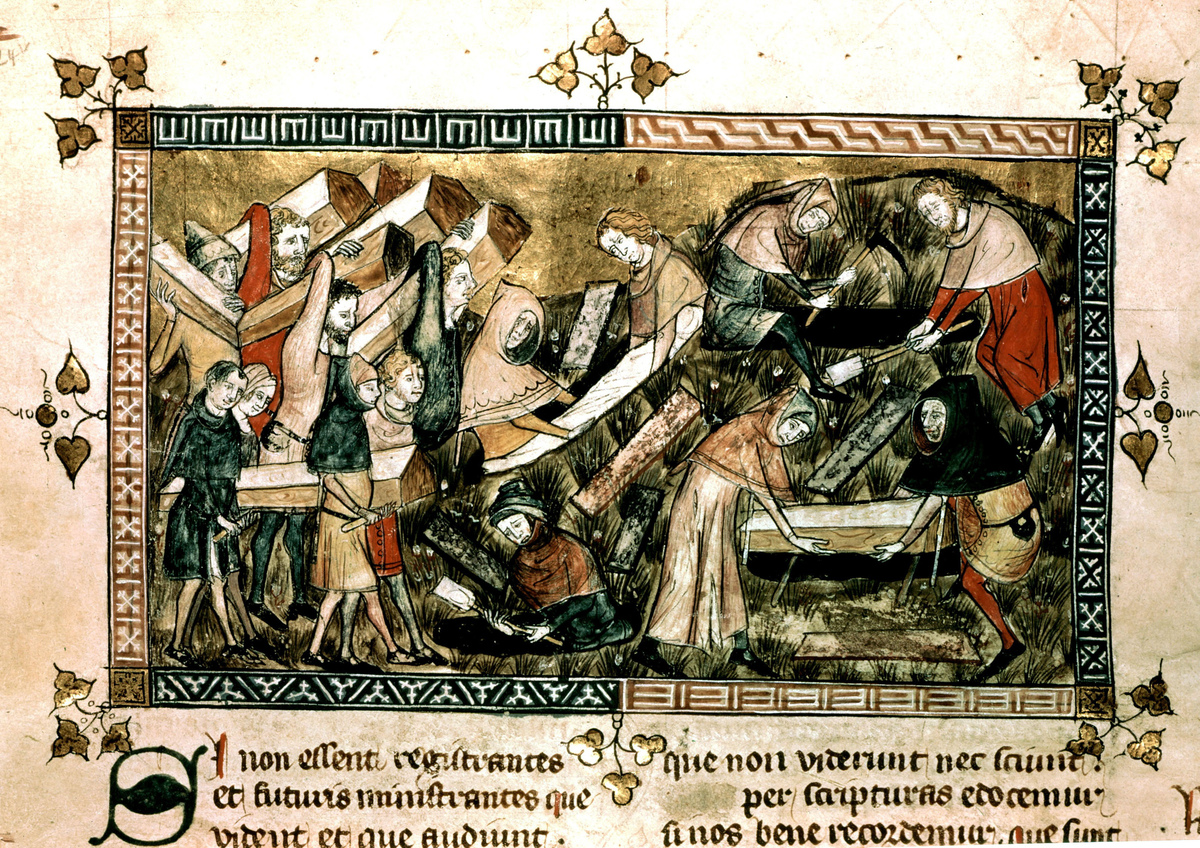 This is one of the earliest known images of the plague. Drawn in 1349, during the time of the Black Death, it shows people carrying coffins of those who died of the illness in Tournai, a city in what is now Belgium.

"He doesn't depict the physical symptoms of the plague. He depicts the social devastation — just that social chaos of having to deal with mass death," says Green.

Another image from the 1340s shows Jews, who were blamed for the Black Death, being burned alive in what is now Switzerland and Germany. 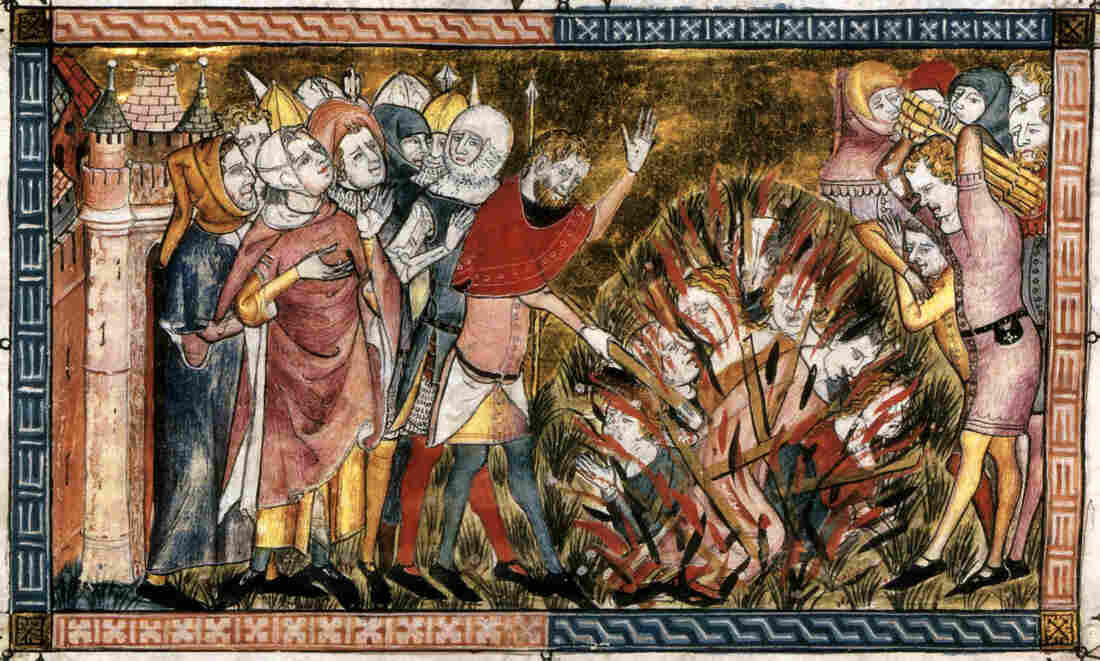 In this history book written in the 1340s by the French chronicler and poet Gilles li Muisis, residents of a town stricken by the plague burn Jews, who were blamed for causing the disease. Royal Library of Belgium hide caption

Why didn't artists show people suffering from the disease itself?

Maybe it was because the artists themselves were too busy dying of the plague to draw other people dying of the plague. Maybe they were fine and just really scared of picking up the disease from their subjects. Or maybe the plague became so commonplace back then that people didn't consider it worth depicting — just like how today, doctors and scientists don't go out of their way to publish images and reports of chicken pox.

Maybe it was because at the time of the Black Death itself, people had no idea what was killing everyone.

The first recorded pandemic, the Plague of Justinian, had ended 700 years earlier. Detailed records existed, but they were mostly written in Syriac or Greek and had remained in the Middle East. The only records available in Western Europe spoke about the plague in vague terms — there was lots of talk about death and demise, but not a lot of specifics on the disease's progression.

"They just had no concept of this disease at all," says Jones.

It wasn't until about a century after the Black Death ended that people in Western Europe started connecting the dots. When the Ottomans conquered Constantinople in 1453, records of the much earlier scourge made their way to Western Europe with fleeing Christian scholars.

And people in Europe, where smaller outbreaks continued to pop up every 10 to 15 years through the 1720s, started connecting the dots.

"They started going, 'Wait a minute, this has happened before,' " says Jones.

And finally, people started drawing the plague and its symptoms. This one from the 1490s shows St. Sebastian praying on behalf of people suffering from or killed by the plague. 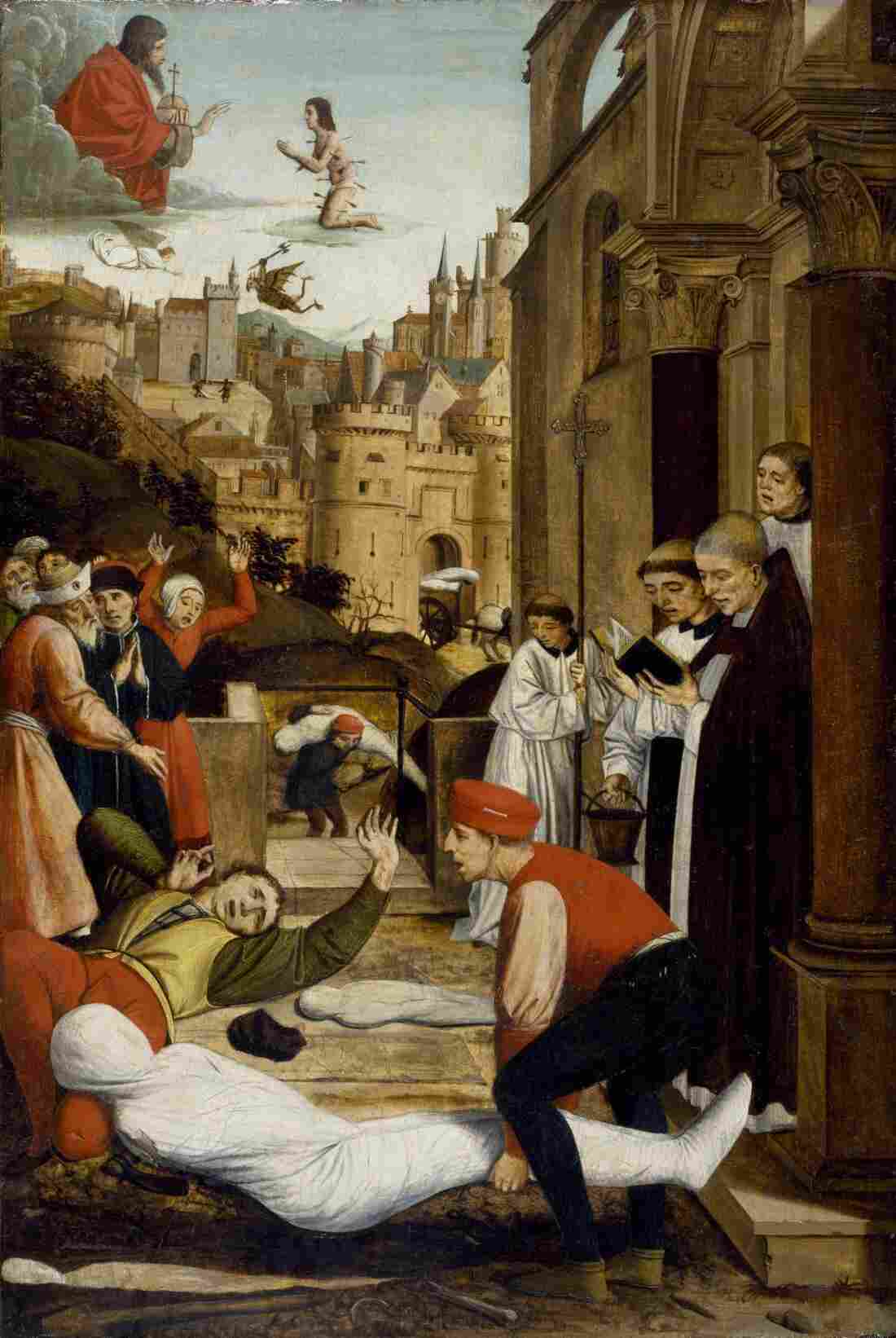 In this painting by French artist Josse Lieferinxe at the end of the 15th century, St. Sebastian, one of the saints whom people prayed to for protection against the plague, kneels before God while a grave attendant is stricken with the plague as he is burying someone who died of the disease. He has a single bubo on his bent neck. The Walters Art Museum hide caption

Note that these people are not at all covered in spots. You have to look closely to notice the swollen red lump — the bubo — on the neck of the man on the ground in green sleeves.

In this image from 1500, a patient points to a bubo in his armpit. 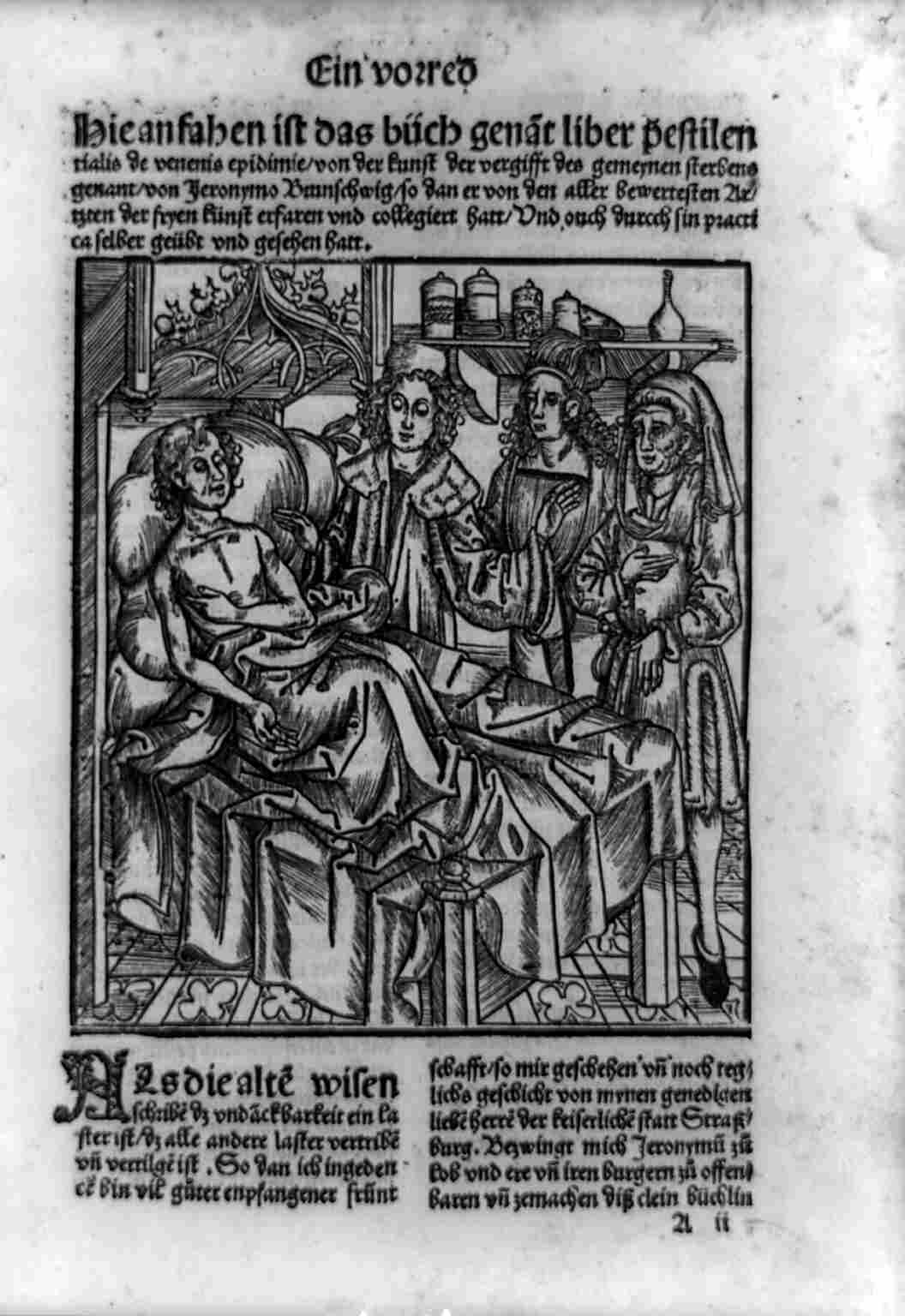 In the Pestbuch, a medical treatise on the plague and how to treat it, a plague victim shows three physicians the bubo in his armpit. It was created around 1500 by a surgeon named Hieronymus Brunschwig. Library of Congress hide caption

Medical illustrations from the late 1400s, like this one from France, are meant to teach medical practitioners how to lance a bubo to get the infection out of it (something along the lines of "poke it with a sharp stick"). 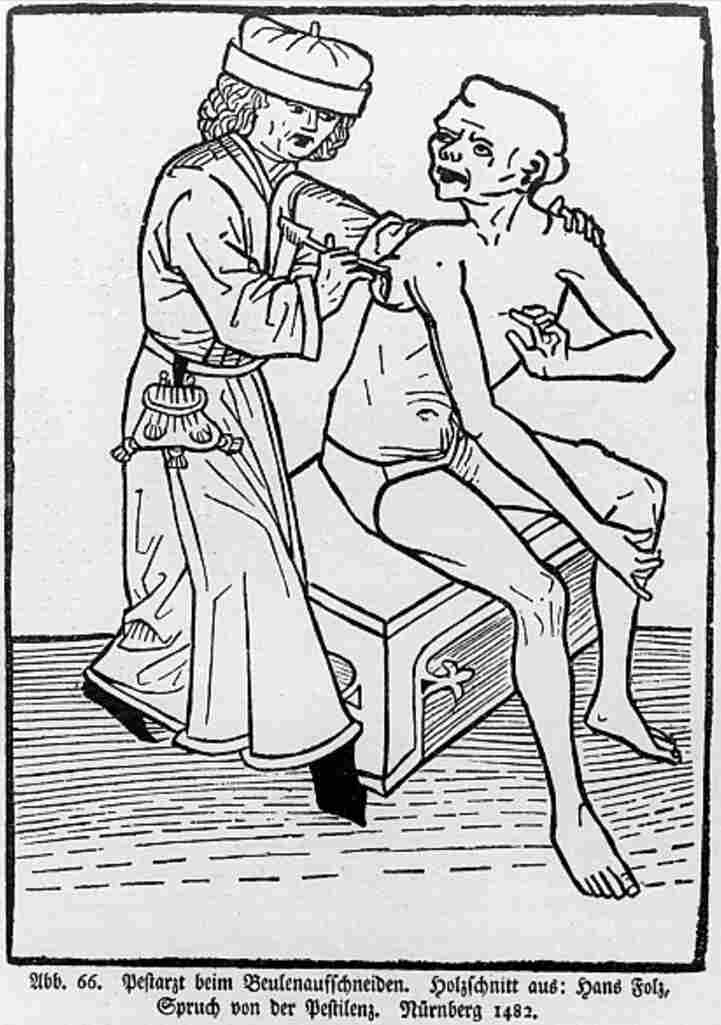 This woodblock print from Germany in the late 15th century is meant to show doctors how to lance a bubo, which was thought to be how to get rid of the plague. Österreichische Nationalbibliothek hide caption

That is what the plague actually looked like to people who were around to experience it. The images don't show much.

But, Jones says, who are we to criticize?

"We judge medieval people for not having these images on the Black Death, but where's our modern image of it?" she says.

After all, plague is still around in many parts of the world, including in the U.S. Where are the images of buboes on American plague patients this year? How about photos of plague suffering in Madagascar, where a recent outbreak killed dozens? And, after all, how many of us could describe what a person suffering from Ebola actually looks like?

"We are always constructing a narrative," says Green. And often that narrative has much more to do with conveying emotion than medical facts.

A previous version of this story incorrectly listed the order in which NPR ran mislabeled photos in a June story about the plague. The first picture was from a Swiss Bible; it was replaced with one from an Italian document.