Accessibility links
Basic Income Experiment In Kenya Prompts A Boom In Savings Clubs : Goats and Soda Skeptics say if you hand cash to the impoverished, they'll mismanage it. But it turns out, many poor people are great at saving — thanks to this ingenious system. 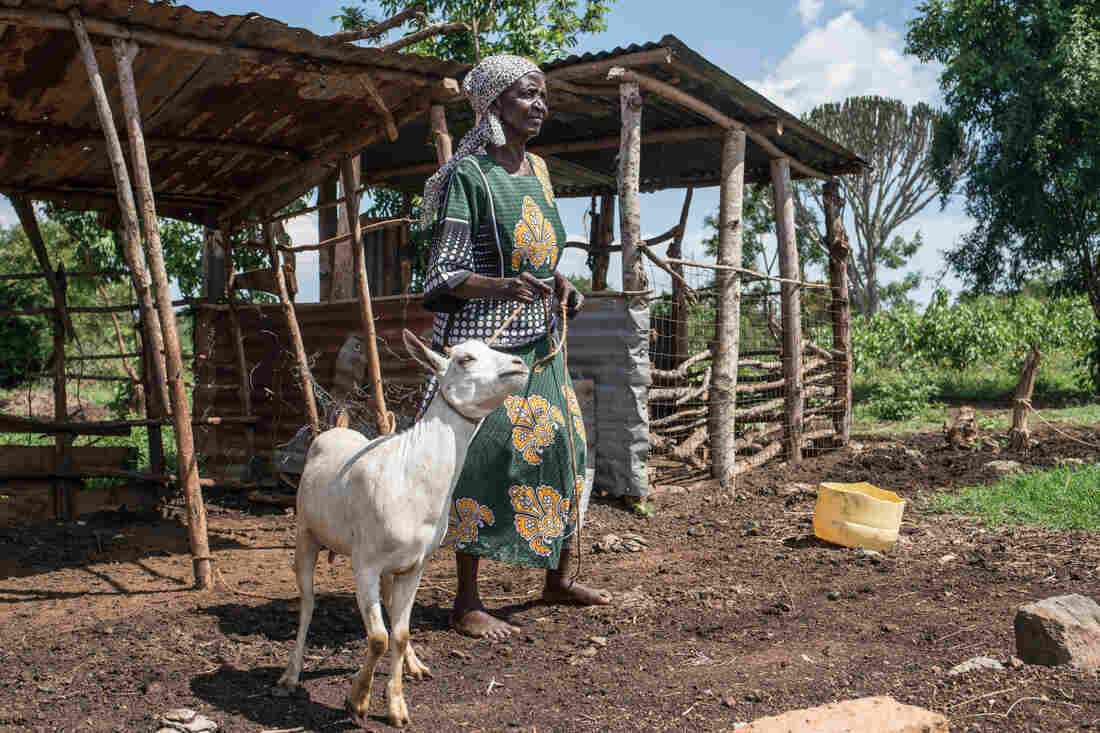 Mary Abagi used her payout from a merry-go-round savings club to buy a goat. People in her village have turned to the clubs as a way to save after a charity began providing them with small monthly cash payments. Nichole Sobecki for NPR hide caption

Mary Abagi is a 63-year-old widow who has spent most of her life eking out a living by growing crops on a tiny plot of land in her Kenyan village. Then, last fall, Abagi learned that the village had been picked for an unusual experiment that promised to change her life.

This is Part 3 of a series in which NPR explores an emerging idea in the fight against global poverty. Instead of offering poor people traditional aid — seeds or goats or job training — what if you just give cash? Read Parts 1 and 2 of the series here.

Join the conversation with the hashtag #NoStringsCash or tweet us @NPRGoatsAndSoda.

An American charity called GiveDirectly is giving every adult in the village $22 every month for the next 12 years. Abagi's first thought: "I will save the money to buy a goat." And to do that, Abagi has turned to a special kind of savings club the villagers call a "merry-go-round."

Abagi's club has 10 members — almost all older women like her. Every month, almost as soon as they get their payment from GiveDirectly, the members meet to put $10 each into a pot. Each month, a different member takes home the pot — $100. That is why they call it a merry-go-round.

On a recent morning, it was Abagi's turn. She joined the other members in a concrete-block hut belonging to one of the oldest members. Everyone stood in a circle, eyes closed as they recited a prayer aloud. Then the treasurer stepped forward and started counting cash into Abagi's open hand. 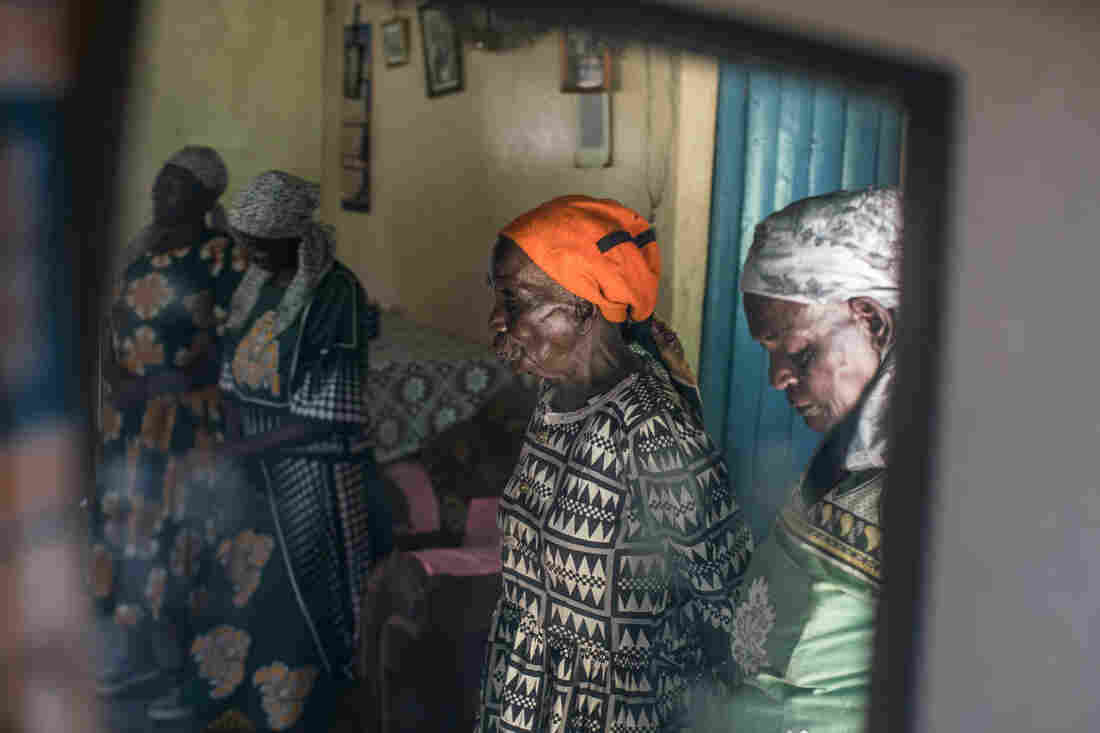 Members of Abagi's savings club begin their monthly meeting with a prayer. These clubs are based entirely on members' faith that everyone in the group will continue to contribute even after they've collected their own payout. Nichole Sobecki for NPR hide caption

"Thank you," she whispered to her friends, speaking in the local language Dholuo, "for being so faithful."

After all, this club is based entirely on faith. If you're lucky to be first in the queue, you get almost a year's worth of savings upfront. If you're among the last, you're relying on your fellow members to keep their promise to put in the money when it's finally your turn. 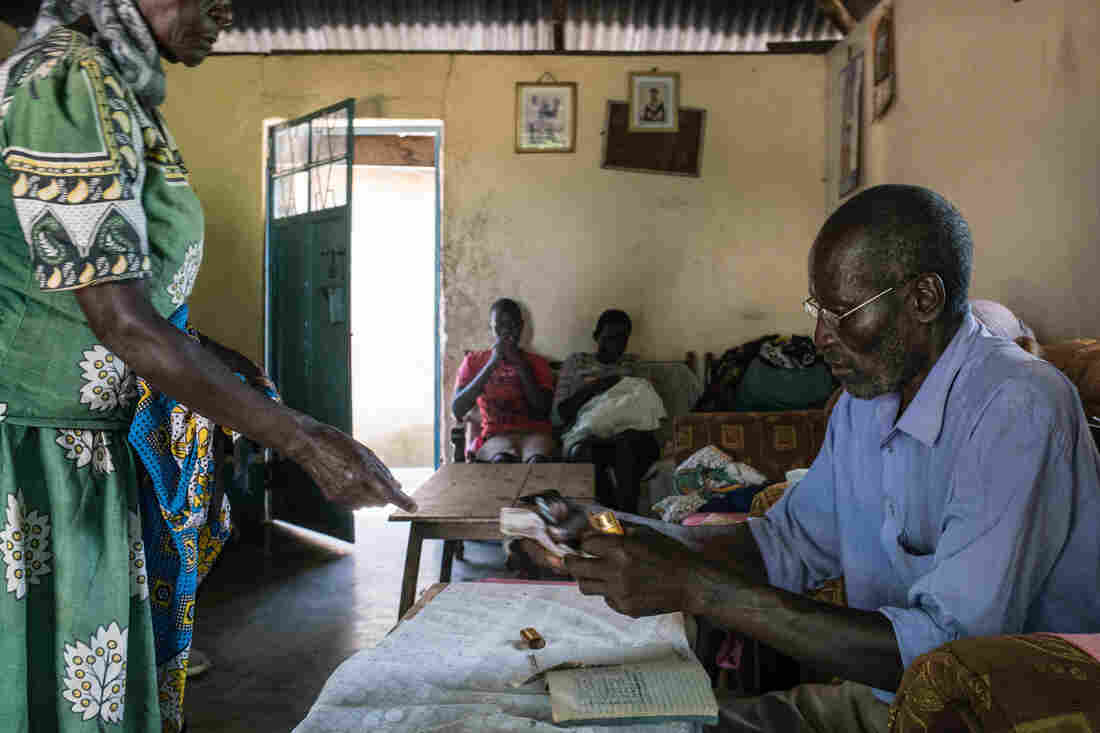 This savings club has 10 members. Every month they put $10 each into the pot — for a total of $100 — and a different person takes it home. Nichole Sobecki for NPR hide caption

But it turns out the people in this village have a lot of faith in one another. Caroline Teti, a staffer with GiveDirectly, says that every month since the charity started the payouts, she has been hearing about a new merry-go-round group that has started up.

"We didn't expect that it would mushroom to this extent," says Teti. "Men have joined. Young people have joined. Almost all the recipients that I talk to belong to a group."

GiveDirectly, which asked that NPR not disclose the name of the village to protect residents' privacy, launched this experiment because it wanted to test the efficacy of giving poor people cash aid instead of in-kind donations such as food, seeds or job training. What happens when you give people a small but steady income they can spend however they like?

The popularity of the merry-go-rounds is the first major finding — and it would seem to rebut a common concern about cash aid: that poor people don't have enough discipline or experience with large sums of money to manage cash aid wisely. 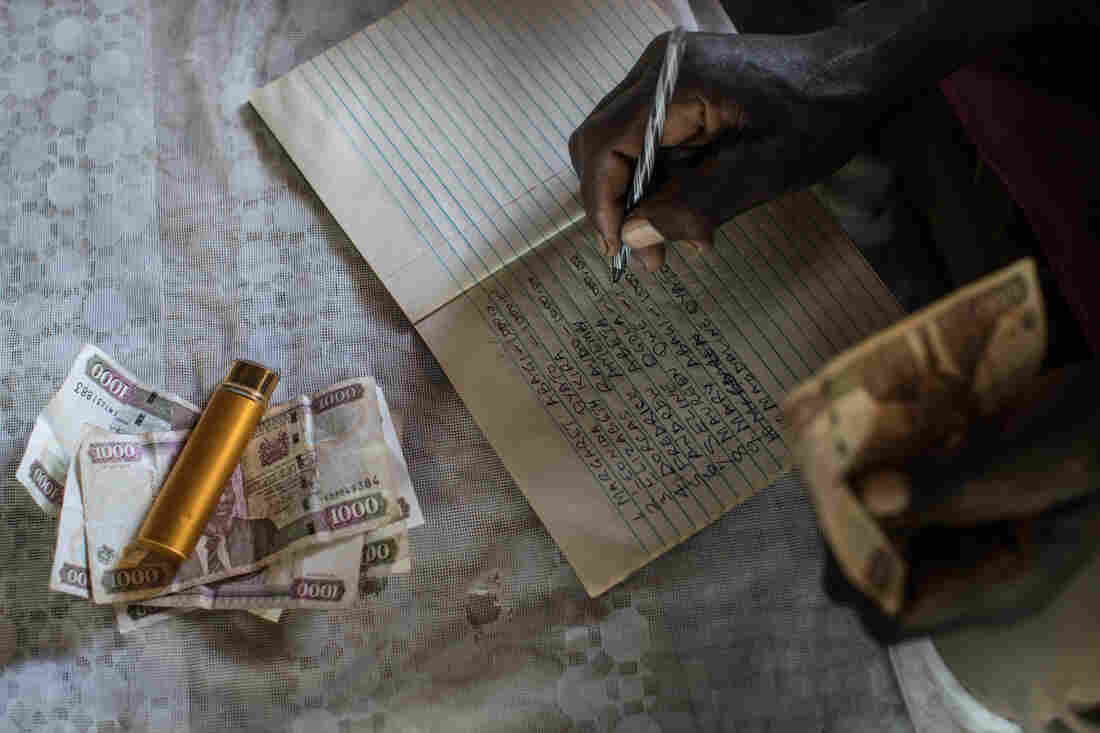 The club treasurer carefully tracks each member's monthly contribution. The success of the clubs belies the stereotype that poor people don't have enough discipline or experience with large sums of money to manage cash aid wisely. Nichole Sobecki for NPR hide caption

Yet Teti says this result isn't entirely surprising. Merry-go-rounds on a small scale are common across Kenya. She herself is in two — one of which includes a high court judge. But for middle- and upper-class people, merry-go-rounds are just a fun excuse to catch up with friends — do a little networking. "It's a social thing," she explains.

For poor people in Kenya who don't have access to banks and who worry about stowing their cash under a mattress, this type of rotating savings club is often the main way to accumulate money.

Rutherford and his collaborators have spent years tracking the day-to-day finances of hundreds of extremely poor people in multiple countries. They've written about it in a book called Portfolios of the Poor. And they argue that the prevalence of savings clubs is evidence of just how savvy most poor people actually are when it comes to managing their money. 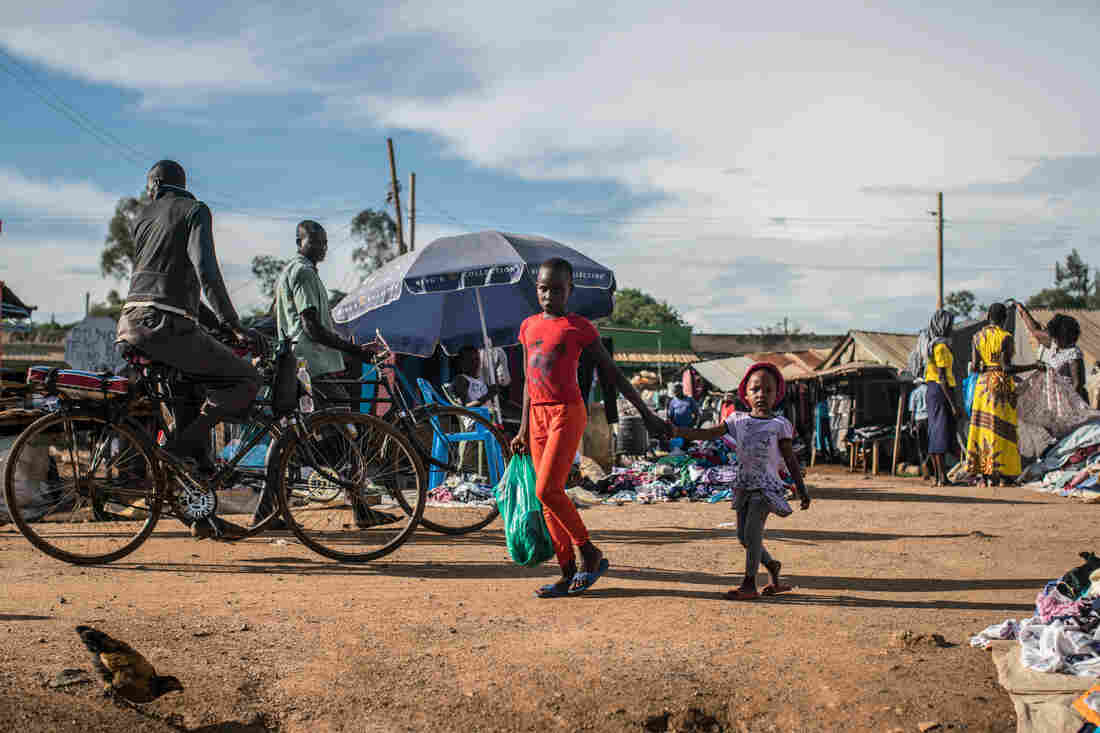 GiveDirectly staffers didn't expect so many recipients of the $22 a month to save the money through merry-go-round clubs. Nichole Sobecki for NPR hide caption

You might assume that extremely poor people don't have enough money to save, says Rutherford, that they simply live hand to mouth. "Whereas, in fact, people are forced to save because they are poor." All it takes is one bad harvest, one illness to ruin you. So even people who don't have enough to eat properly are constantly setting aside teeny amounts through their savings clubs so as to build them into a larger chunk.

"What the Scots would call every mickle makes a muckle," says Rutherford.

The only difference with the clubs popping up in Abagi's village are the amounts involved. Now Abagi suddenly has $100 in her hand. She says she'll use about $70 to buy a goat. She wants to name the goat "GiveDirectly" in honor of the charity that made it possible. And she is hoping this purchase leads to even bigger things.

"If you buy a goat, it will be able to give birth to more goats," Abagi explains. "And then you can sell them — maybe buy a cow."

It's just one of a host of plans people in the village are making for their merry-go-round payouts. Some want to buy more profitable crops — like eucalyptus trees they can sell as construction lumber. Irene Ogutu, a 24-year-old mother of two who makes her living selling fish in a nearby market, is in two merry-go-rounds — each one requiring a $10 monthly contribution. She's using the first to build up savings for emergencies and the second to save up for iron sheets to build an addition to her house. 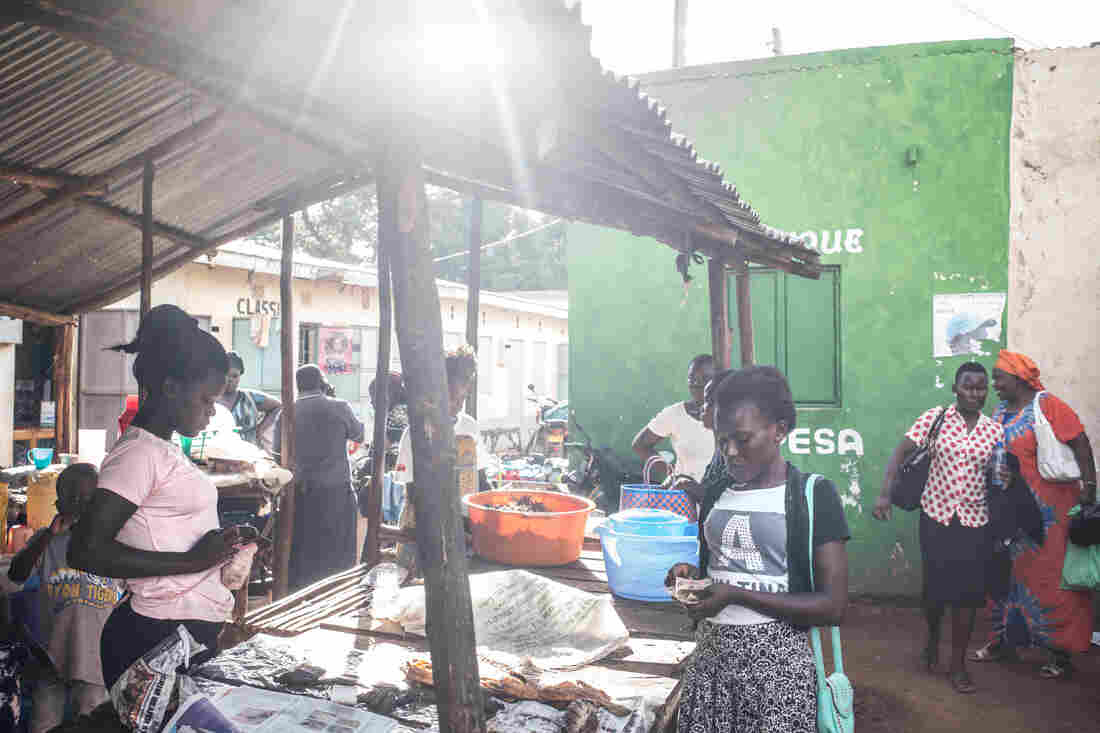 Irene Ogutu (left), who is in two merry-go-rounds, sells fish at her stall in a market near the village. She is using one fund to save for emergencies and the second to buy metal sheets to build an addition to her house. Nichole Sobecki for NPR hide caption

All the activity has caught the interest of Abagi's son, Kennedy Aswan, who happens to be the village leader.

Late one afternoon, he gathers everyone for a community meeting in a field near his mother's house. He asks them: What if these merry-go-round clubs could be used to lift up the whole village — fund projects like running water and toilets for the school?

"This is our opportunity," he says. "Let's not let other people laugh at us later — say we got this money for 12 years and we have nothing to show for it."

Aswan hasn't figured out an exact plan. But for now, he is trying to understand who is doing what. "For each merry-go-round," he announces, "I want to know the name, how many members you have, who's the leader."

A young man in a light brown shirt raises his hand. "I'm the chairman of my group," he says. "We're calling it 'Backward Never Forward Ever.' "

A woman in the front row starts giggling. "Our group doesn't have a name — we haven't been baptized yet," she jokes.

A middle-aged man named Denis Otieno stands up and announces he is still looking for more people to join his group.

"We've got seven members, and we want three more," he says. 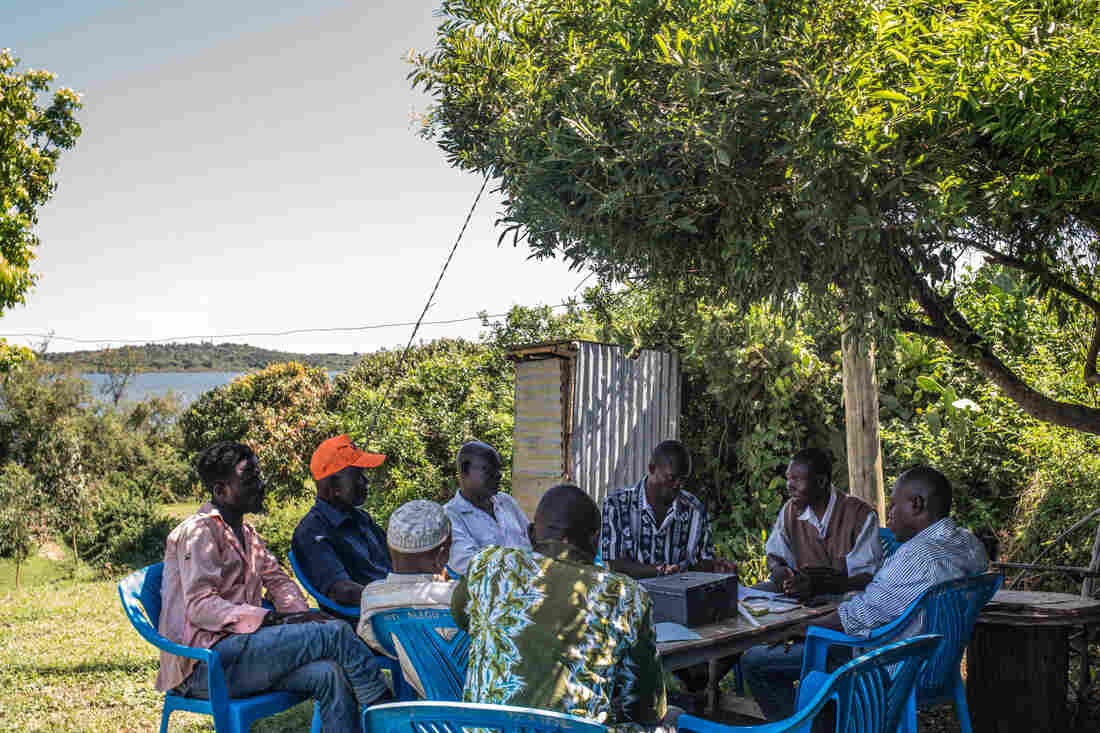 Denis Otieno (third from the right) meets with fellow members of the savings club that he founded after GiveDirectly began providing every adult in the village with monthly cash aid. Nichole Sobecki for NPR hide caption

There is, however, one curious aspect to the flourishing of merry-go-rounds in this village. Unlike other poor countries, Kenya actually has a system of mobile phone banking that makes it easy for anyone to set up a savings account. So I ask Otieno, why is he tying up his money in a merry-go-round club? Wouldn't it be safer to simply keep it in a mobile bank account?

"There are temptations," he says. "You know, problems come now and again."

For instance, sometimes he can't afford as much food as he would like for his four kids. He is trying to save up for their high school tuition. If his savings were readily accessible, he says, it would impossible to resist tapping them. But with the money obligated to the merry-go-round club, "there's no way you'll break the contract with the other people. You have to pay back!"

Was there ever a time in your life when just a little no-strings-attached cash would have made — or did make — a huge difference? Use the tool below to tell us your story. We may feature it on NPR.