PHOTOS: Single Mothers Of Afghanistan Live On The Fringe

PHOTOS: Single Mothers Of Afghanistan Live On The Fringe 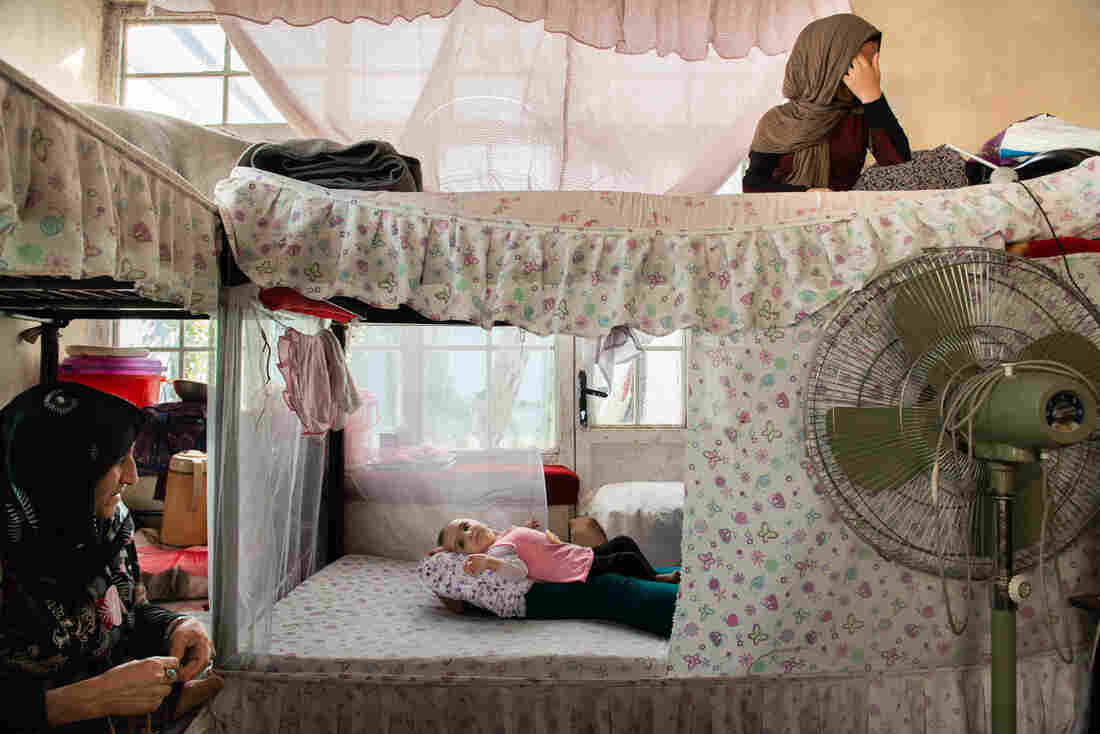 Wahida, 20, sits on her bed inside the female ward of a prison in Herat, Afghanistan. She was arrested when she was seven months pregnant, convicted for helping her sister-in-law murder her husband. Her daughter, Mahtab, who is now 10 months old, was born inside the prison. Wahida's biggest fear is the future, when her sentence is over and she will have to face the outside world. Kiana Hayeri hide caption 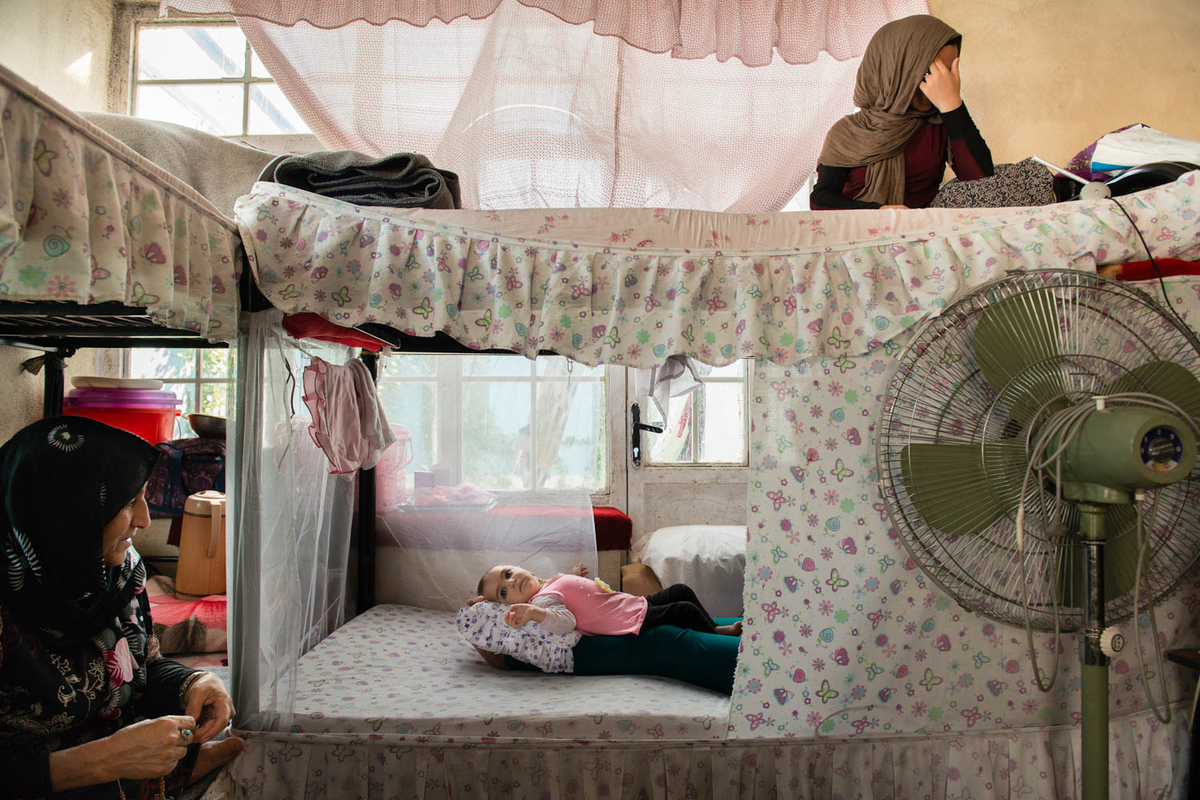 Wahida, 20, sits on her bed inside the female ward of a prison in Herat, Afghanistan. She was arrested when she was seven months pregnant, convicted for helping her sister-in-law murder her husband. Her daughter, Mahtab, who is now 10 months old, was born inside the prison. Wahida's biggest fear is the future, when her sentence is over and she will have to face the outside world.

In 2015, Kiana Hayeri was living in Kabul and noticed something strange. She was helping her roommate, an Australian TV producer, with a script translation. The main character, a mother of three who divorces her abusive husband, was always described in a way that referred to a male relative.

There was no word in Dari, a language spoken in Afghanistan, to describe a single mother. "They are fighting against a culture that doesn't even recognize them," says Hayeri, a Tehran-based photographer.

She went back to Afghanistan a year later to document single women in Kabul, the capital, and Herat, a city in the west. In July, the work earned her a grand prize in documentary photography from the International Academic Forum, an interdisciplinary think tank, conference organizer and publisher based in Japan.

Decades of war have left more than 2 million Afghan women widows, according to data from U.N. Women. Others have lost their husbands in suicide attacks or in the line of police duty. And because women typically have no say in who their fathers arrange for them to marry, a small percentage flee abusive husbands and obtain divorces — a decision that requires immense courage. 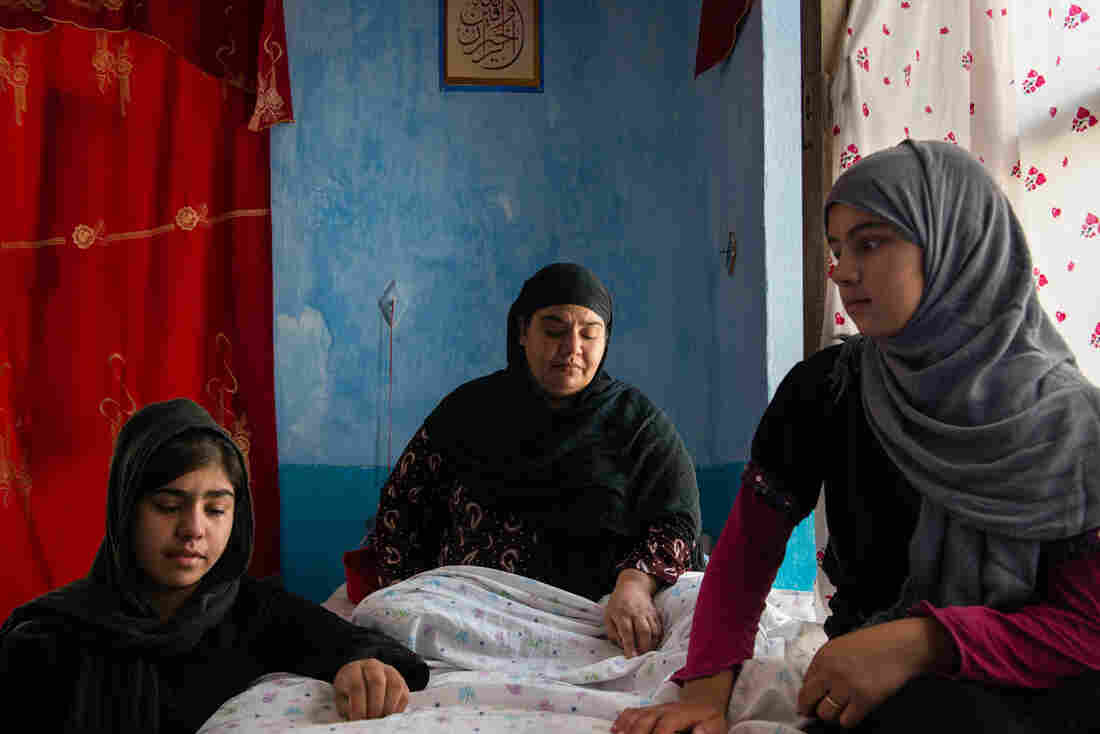 Mina, 38, was pregnant with her fifth child when she was diagnosed with spinal tuberculosis. She became paralyzed from the waist down at the time she gave birth. The child didn't survive. Her husband kicked her and her children out of the house and remarried. Mina, who is now living in Kabul, Afghanistan, survived several suicide attempts. Kiana Hayeri hide caption

Women who flee violent relationships don't necessarily want to marry again. Neither do widows who are often pressured to wed a brother of their husband so that their children have a male guardian.

"The women I met either chose not to do it, or fought against it and refused to do it," says Hayeri, who photographed the women in August and September 2016. "They are fighters."

That decision makes them among Afghan society's most vulnerable. Many are disowned by their families. They may be harassed or abused. And with 60 percent of the country unemployed, every woman must find a way to support her children. It is not uncommon to have five kids, and Hayeri says she's photographed mothers with as many as eight.

"I am constantly trying to find a positive point, something that I can hold onto while I'm doing this work," she says, thinking about the women. "It's not easy at all." 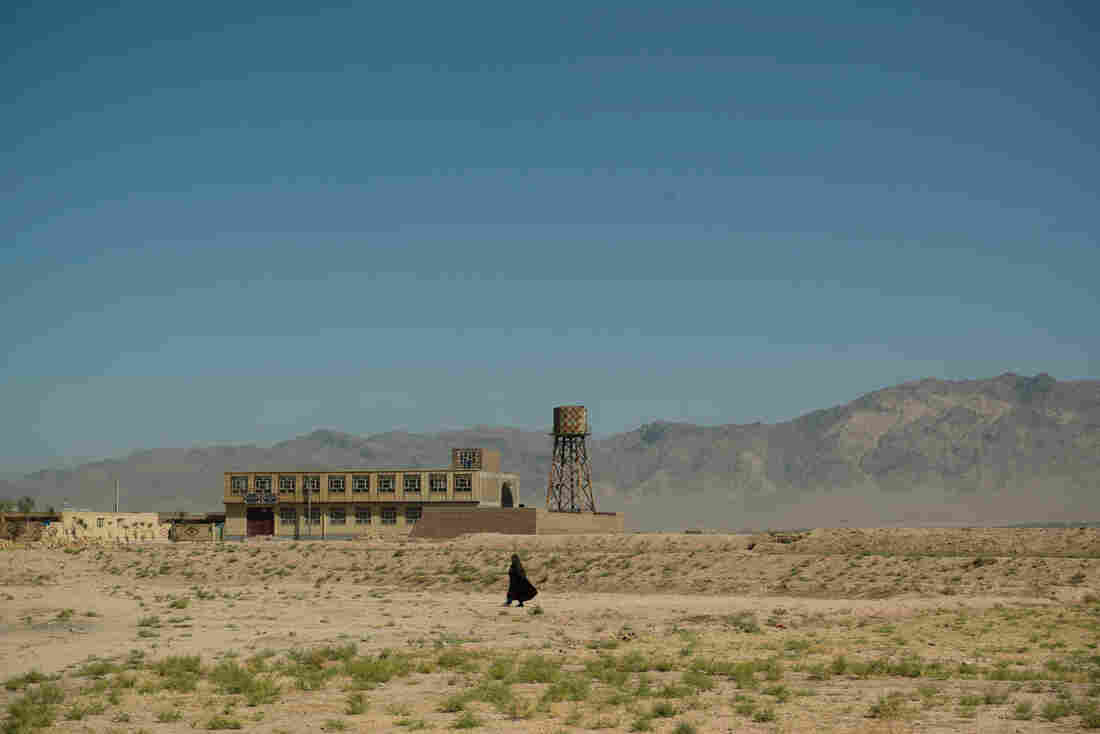 A woman walks to the entrance of Habib al-Mustafa, a guarded settlement outside of Herat. The building is home to over 130 families without a male guardian. No men, other than relatives of these women, are allowed inside. Kiana Hayeri hide caption

Hayeri, 29, says that being a woman gives her access that no foreign or local man could ever get. The Iranian photographer recently spoke to NPR from Kabul, where she is currently on assignment. This interview has been edited for length and clarity.

How are single mothers treated by Afghan society?

If you are a widow, you are considered to be a "black widow." It is a bad omen. If you divorce, you have gone through the trouble of leaving your spouse and getting a divorce. You are not a good woman for doing that. They have an expression here in Afghanistan: You go to your husband's house with a white dress and you leave it with a white dress, referring to the white sheet they wrap around a dead body before they bury them. It's something that is said pretty often.

What kinds of emotional traits did you note in the women you met?

Afghan women are always asked [by society] to suppress all of these feelings and emotions, even their thoughts. They are not allowed to express themselves. One thing that I noticed among all of the women who I photographed is that they constantly complain about racing hearts, anger, fear, headaches — these things that I associate with PTSD and mental illnesses like depression. But they are not aware of it.

Whether widowed or divorced, does her family or her husband's ever provide support?

Sometimes they do. One of the women I photographed, her husband's family is an elite family. They gave her complete freedom [after her husband died of cancer]. They help the family financially. They were educated and they came from a different class. They were a very famous family of musicians who are trying to preserve their Afghan music. We do see that. I don't think it's very often.

Do widows receive any help from the government? 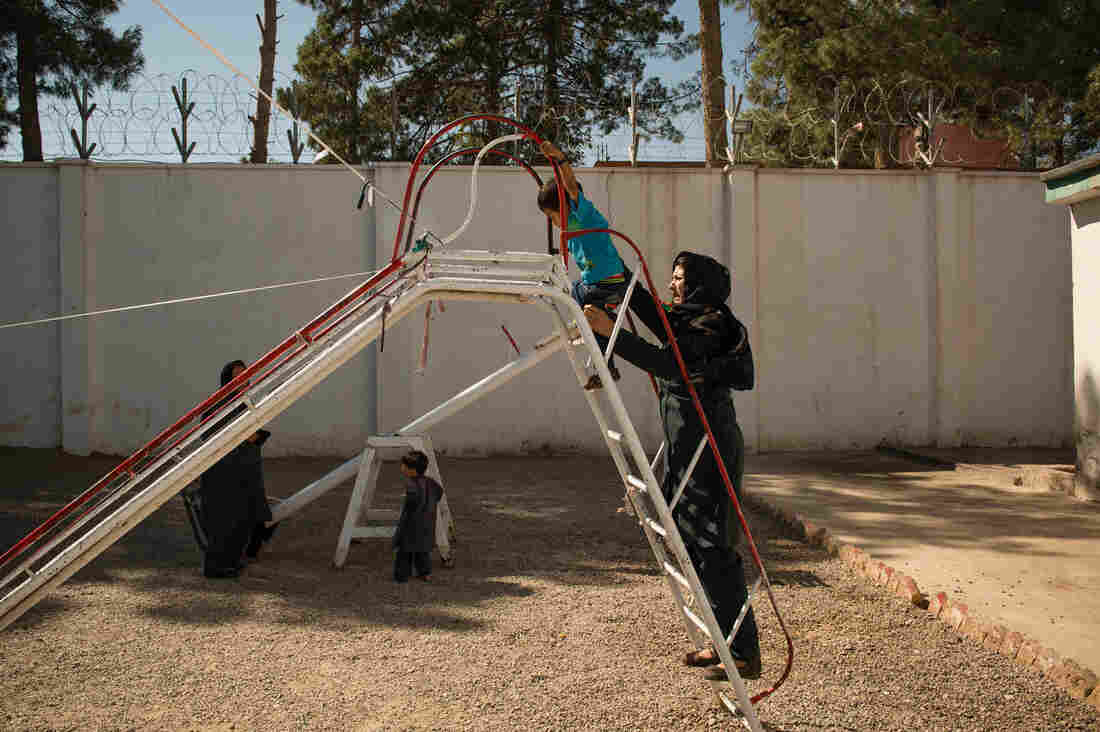 Inside the prison in Herat, there is a kindergarten and a small playground for the kids. There are currently 57 children living with their mothers inside the female ward. These mothers are often abandoned or disowned by their families for the crimes they may or may not have committed. Kiana Hayeri hide caption

Only if your husband is part of the army. I'm not sure about the police but I assume also the police, if they were killed while they were working. But nothing about people who get killed in suicide attacks or illnesses.

Are there any centers or places of support where single mothers can go?

There are shelters for women that [have been pushed to] the street or for fleeing abusive husbands. But the funding is limited. None of them are pleasant places where you want to live yourself or let alone bring your kids.

You photographed a fascinating community in Kabul built by and for women.

Tapaye Zanabad is a hill [where] women came together and started building their own houses. They don't own the land. The government tried to destroy the little township they made but it couldn't. Apparently the woman who started it lied down in front of the bulldozer and said, "You have to pass over my dead body before you destroy this township." There is no running water so the kids usually come down the hill every morning to get water from the trucks. There is no help for them there.

Did you see women helping other women in the weeks you were there?

Yes, very much. If one has to work and the other is home, they basically babysit the other's kids. I've seen them lending each other food. I photographed two very old single moms, whose children are in their 40s and 50s. Their husbands died around the same time [and] helped one another. One of them ties threads to make these long, beautiful belts. She had that skill and passed that onto the other single mom so she could start making money.

Tell me about someone who really stood out to you. 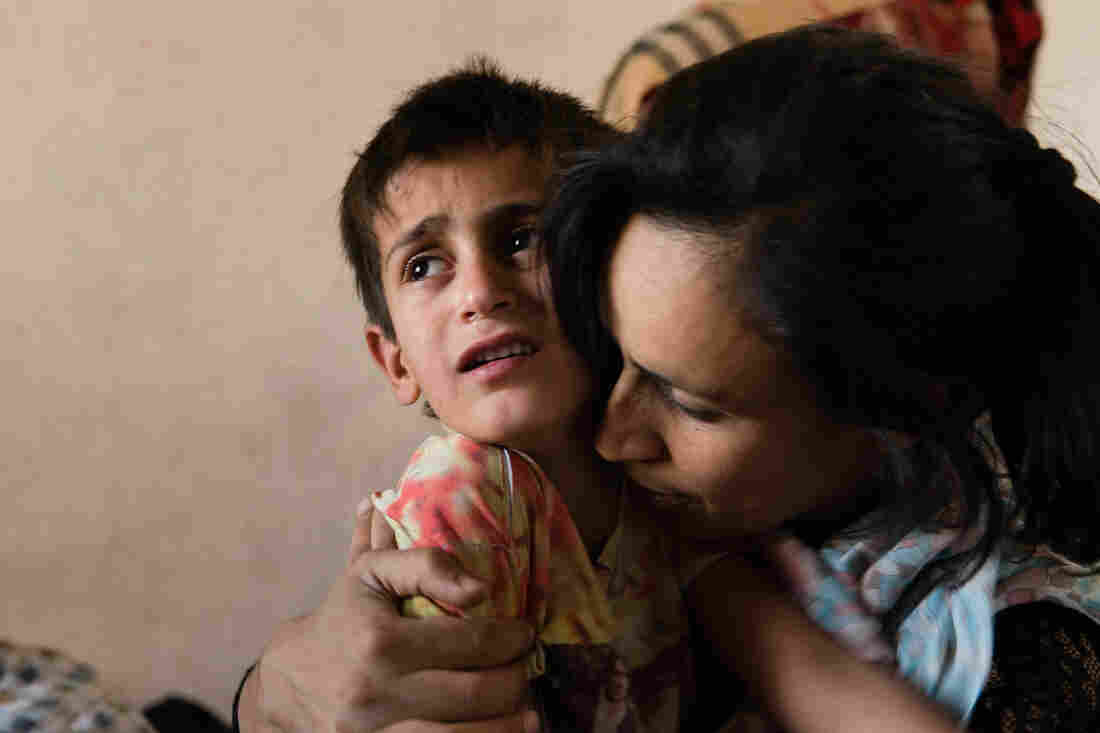 Reihana, 28, comforts her son after she punished him out of despair. She was 14 when she was sold by her father to a man twice her age. She was physically and sexually abused until she ran away to Kabul with her five children. She now studies at a university part time and works full time at Afghanistan's anti-narcotics ministry. Kiana Hayeri hide caption

Reihana was 14 when her father sold her to a man who was basically twice her age. The husband took her away, and he basically abused her in every possible way — emotionally, verbally, physically, even sexually. She had five children when she ran away from the house and came back to Kabul and divorced her husband, amazingly.

When she was married, she never went to school. So on her own she started studying and started teaching other girls in her village how to read and write.

There was a competition on TV, a contest about general information on the capital [Kabul], so she studied hard. She attended the contest. Won it. She got a big chunk of money and put that into university where she enrolled herself, and got a job at a ministry.

Right now she is studying part time, working full time, and also on top of raising her five kids, she is also raising the daughter of her brother who is now in prison.

How does the Taliban, which is regaining control of parts of Afghanistan, factor into what single mothers face? 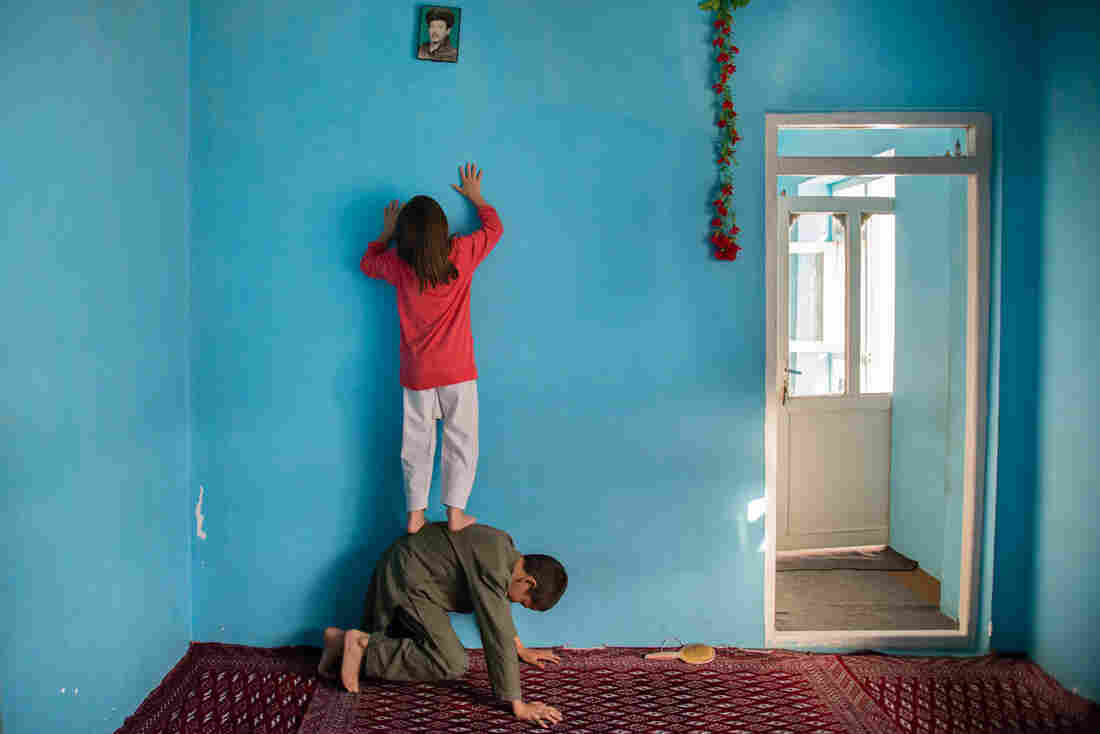 In Kabul, two children put a photo of their father back on the wall. He died from a suicide attack while he was on his way to work. Kiana Hayeri hide caption

The country is becoming more unstable. These women don't feel safe anymore. Who knows what's going to happen five years from now. What if Taliban or another insurgent group comes to power and they don't allow women to work? How are these women going to survive?

Sasha Ingber is a multimedia journalist who has covered science, culture and foreign affairs for such publications as National Geographic, The Washington Post Magazineand Smithsonian. You can contact her @SashaIngber.