Accessibility links
Stopping Female Genital Mutilation Is The Main Topic At A Day Camp In Maryland : Goats and Soda There's a nature walk, a drum performance, a picnic lunch — and speakers who tell the youngsters about the harm caused by the practice.

A Day Camp That Teaches Kids In The U.S. About Female Genital Mutilation

A Day Camp That Teaches Kids In The U.S. About Female Genital Mutilation 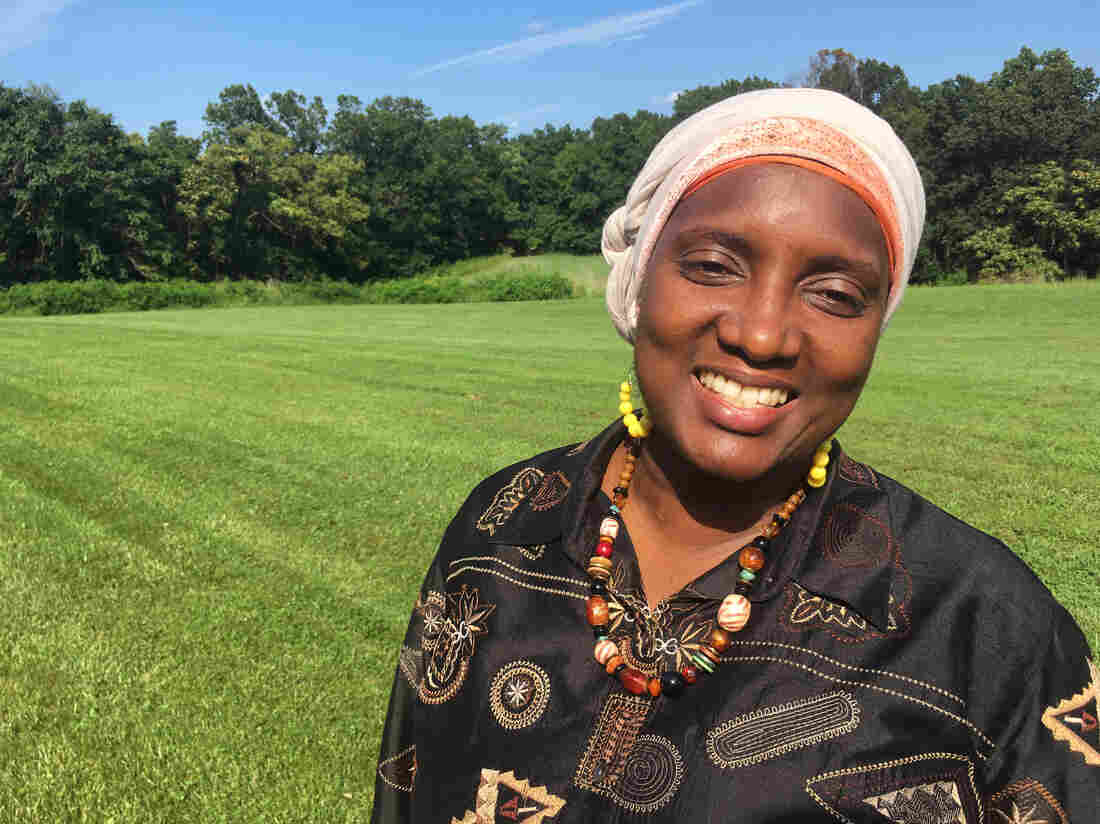 Mariama Conte underwent female genital mutilation when she was 9. She volunteers as a mentor at an annual kids' camp that aims to educate them about the harm caused by FGM. Courtney Columbus /for NPR hide caption 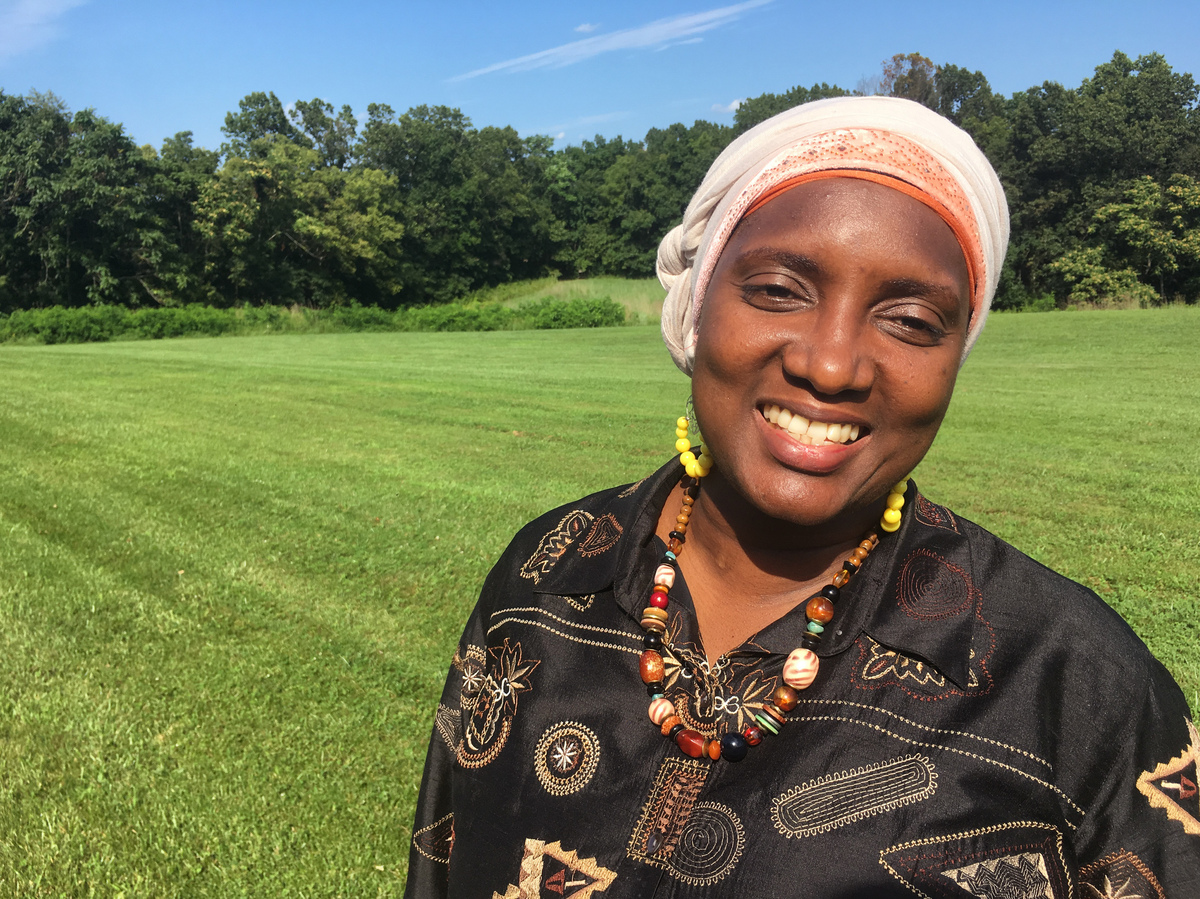 Mariama Conte underwent female genital mutilation when she was 9. She volunteers as a mentor at an annual kids' camp that aims to educate them about the harm caused by FGM.

It's a hot and humid day, but the kids are buzzing. As they pile out of a coach bus at a secluded retreat center surrounded by trees and open fields, one girl spins in circles and says, "No FGM, no FGM!"

So it's definitely not your typical camp.

Last Saturday, about 60 girls and boys and some parents and volunteers traveled to the rural town of Sharpsburg, Maryland, for a one-day retreat that teaches kids about the harm caused by female genital mutilation: cutting all or part of a woman's external genitalia, typically when she's under age 15. It's often a rite of passage for girls, though there are also reports of infants being cut.

"We think girls can be initiated [into womanhood] without mutilation," says Djessou Kouyate-Conteh. She's the camp's leader and is the senior project officer at the nonprofit Inter-African Committee USA, the organization that runs the camp.

Many of the families participating have ties to Guinea, one of the African countries where FGM is practiced. UNICEF tracks the prevalence of FGM in 30 countries in Africa, the Middle East and other regions. At least 200 million girls and women alive today have undergone female genital mutilation or cutting, according to UNICEF. In cultures where FGM is practiced, girls who have not been cut are generally considered unclean or unmarriageable.

In the U.S., the practice has been illegal since 1996, although it still occurs. Just this year, two physicians were indicted on charges stemming from the alleged female genital mutilation of two young girls in Michigan.

The Centers for Disease Control and Prevention estimates that more than 500,000 women and girls living in the U.S. have either undergone FGM or are at risk. Some immigrant parents take their children back to their homeland for FGM. That's why the camp, now in its third year, is called "Summer Without FGM."

Among the goals: to educate youth about the practice, which can cause health issues like infections and complications during childbirth.

If the young generation understands the harm that FGM can do, they'll speak out against it, says Aicha Bangoura-Paye, an Inter-African Committee USA board member who grew up in Guinea.

Several guest speakers led activities and talked with the campers.

Mariama Conte underwent FGM in Guinea when she was 9. She's now an elementary school aide and a volunteer mentor at the camp.

"My mom said, 'We came to circumcise you.' I felt like throwing up, I felt disappointed, deceived," she says. "I felt very scared, I've never felt like that in my life."

The procedure resulted in recurring infections that caused her to miss school. She says the infections plagued her until she moved to the U.S. about 15 years ago and got better medical care.

"You have a job to do," she told the campers. "You have to help stop this." She reminded them: "There's a law here that's going to stop them from hurting you."

The Real Goal For These Cricket-Crazy Maasai Men? Ending 'The Cut'

"As men, we have a role to play in this fight," Cherif said.

He asked the boys at the camp what they could do to help girls. One replied, "Give them confidence and protect them."

Kouyate-Conteh says she hopes kids will talk about FGM with their peers and be aware of its dangers. "If they are traveling to those target countries," she says, she wants them "to be aware of this and why some people are still doing it, and what are the laws, what are the consequences."

The camp had a lighter side as well. There was a picnic lunch under the trees — and an African drum performance that got the campers clapping and dancing.

Shelby Quast, the Americas director for Equality Now, is familiar with the camp and has collaborated with IAC-USA. "It's an interesting idea of celebrating culture, emphasizing that you can do that without cutting a girl's genitalia," she says.

It's helpful that the camp involves many kids of Guinean descent, because most of the camp's leaders are from Guinea, she says. "They're talking with the kids in their circles, so there's a bit of trust."

Mariama Conte had some fun with the campers at the end of the day. While she helped clean up, she laughed as she showed girls how to balance a basket on their heads.

She hopes girls today don't have to go through what she went through.

"There are many other ways of initiating young girls," she says. "We do not need to be mutilated."

Courtney Columbus is a multimedia journalist based in the Washington, D.C. area. She covers science, global health and consumer health. Her past work has appeared in the Arizona Republic and on Arizona PBS. Contact her @cmcolumbus11.