Accessibility links
Rare 'Tree Man' Skin Disease Ruined Gaza Man's Life Until Israeli Doctors Helped : Goats and Soda He was in pain. He could not work. He was ashamed. He'd been told there was no treatment. Then he went to Hadassah Medical Center. 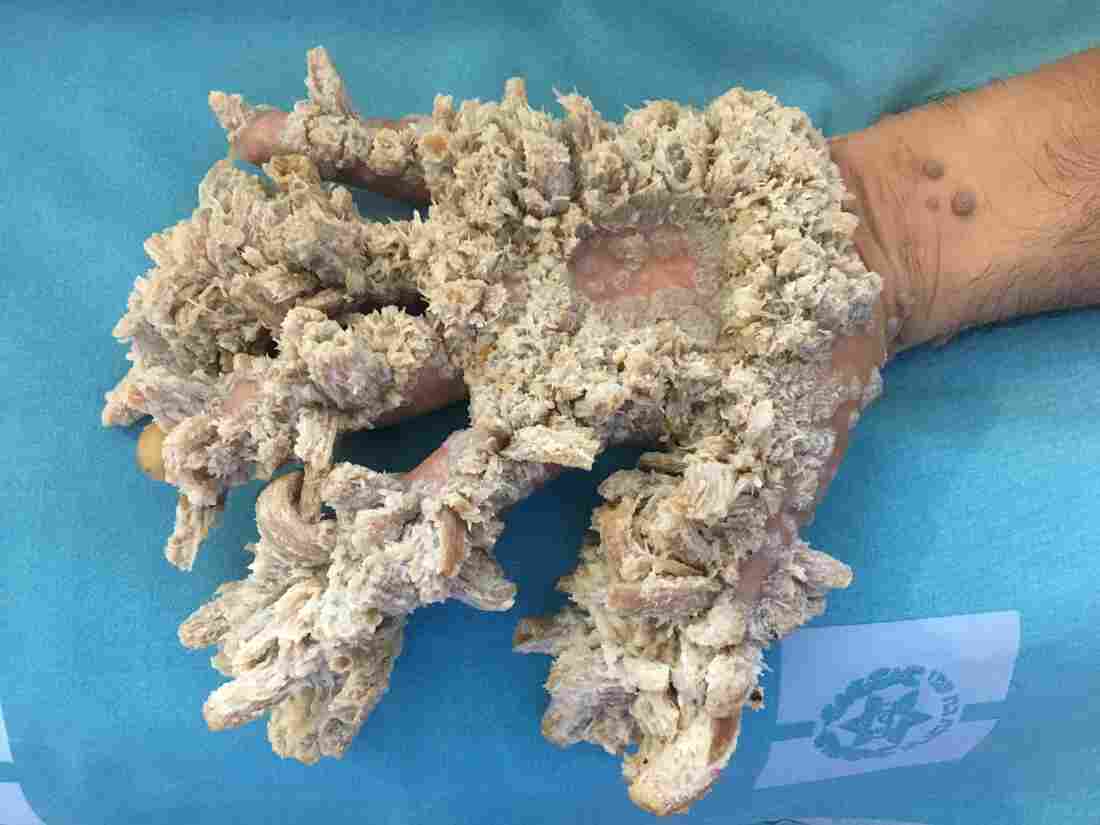 The growths on Muhammad Taluli's hands were from a severe case of a rare condition called epidermodysplasia verruciformis — sometimes called "tree man" disease because the tumors can resemble wood or bark. Hadassah hide caption 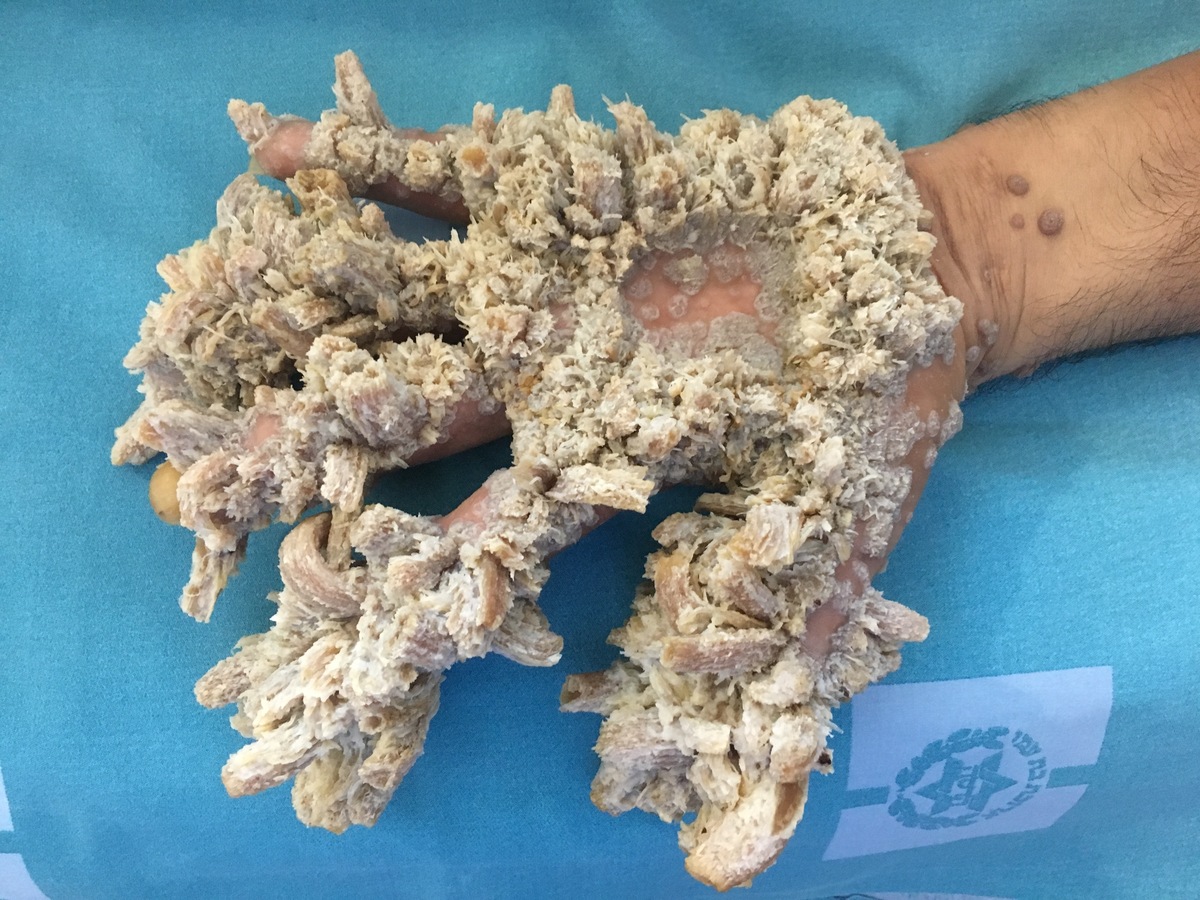 The growths on Muhammad Taluli's hands were from a severe case of a rare condition called epidermodysplasia verruciformis — sometimes called "tree man" disease because the tumors can resemble wood or bark.

Muhammad Taluli arrived from Gaza at Jerusalem's Hadassah Medical Center a few months ago and unwrapped the cloth from his hands to reveal gray and white growths that looked like tree bark. The doctors had never seen anything like it.

In fact, there have been only a handful of such extreme cases of this rare condition — called epidermodysplasia verruciformis — documented in medical literature around the world, says Dr. Michael Chernofsky, senior hand and microvascular surgeon at Hadassah, who is overseeing the man's treatment.

"I've seen some weird things, but not this," Chernofsky says.

The culprit behind epidermodysplasia verruciformis is the human papillomavirus, which comes in more than 100 different strains, combined with one of many different genetic mutations that limit the body's ability to fight off the virus. When the immune system cannot deal with HPV, the virus can take over the skin, causing the lesions, Chernofsky explains. 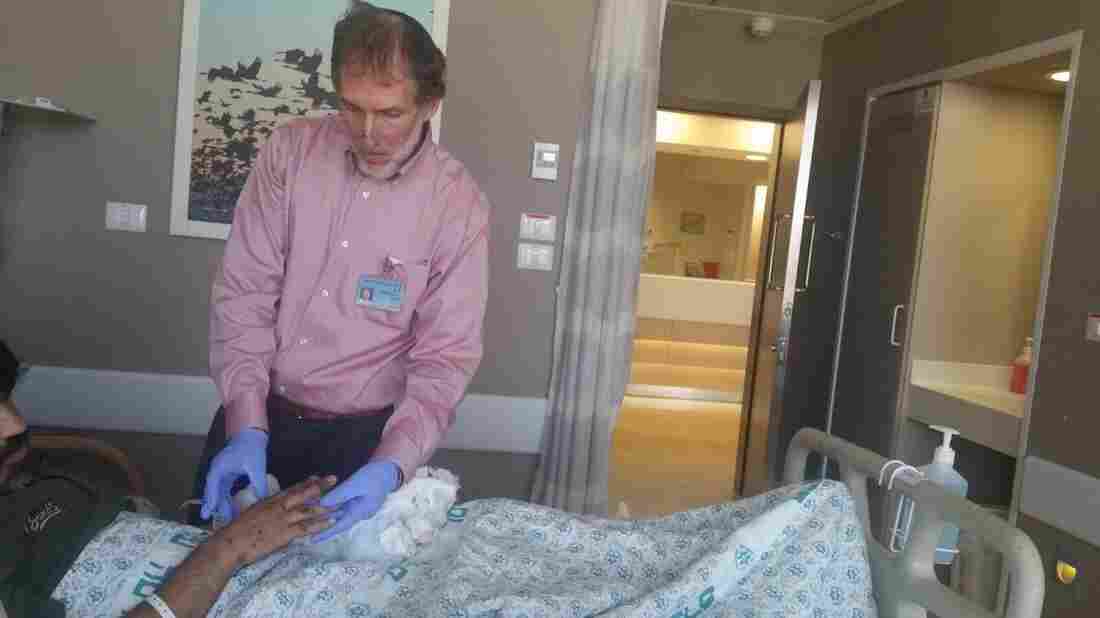 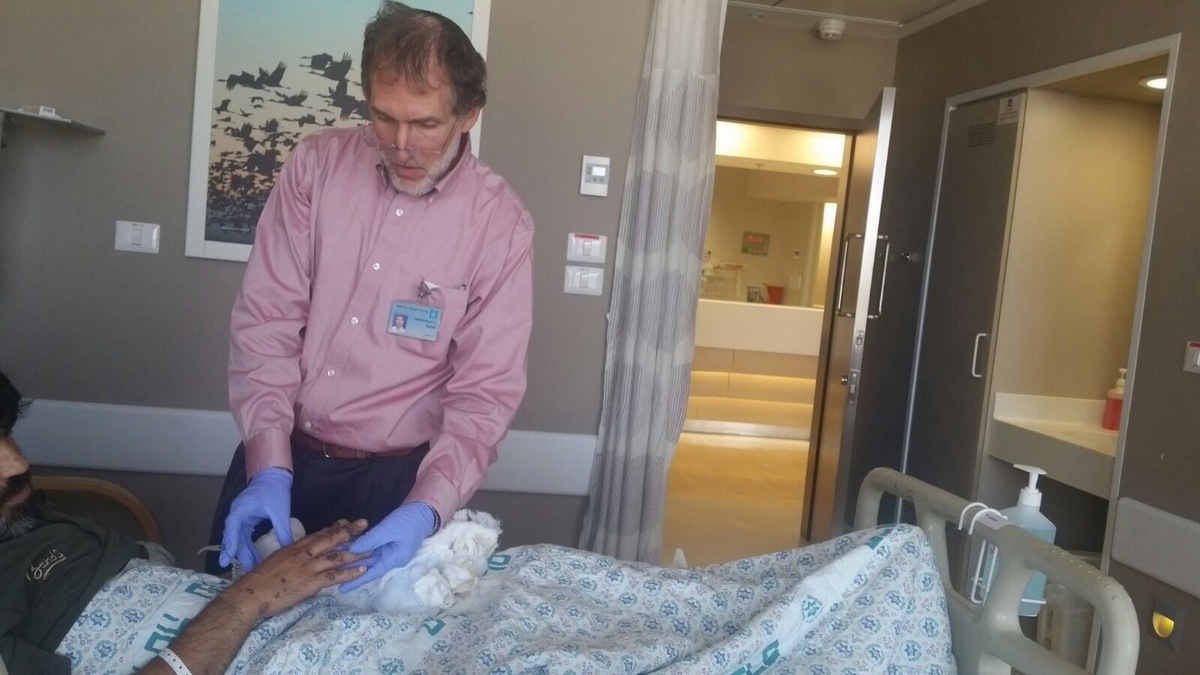 Dr. Michael Chernofsky and patient Muhammad Taluli after the surgery.

After a few well-publicized cases in Bangladesh and Romania, the condition was nicknamed "tree man" disease in the media because the tumors often resemble wood or bark.

In most cases of epidermodysplasia verruciformis, which total about 600 a year worldwide, the patient develops many flat warts rather than large wood-like tumors, says Jerome Garden, a professor at Northwestern University's Feinberg School of Medicine. Even if left alone, the warts do not progress into large tumors like Taluli's, he says.

Taluli's doctors and other rare skin disease experts emphasize that there haven't been enough properly documented cases to say with any certainty how earlier intervention would affect the condition. If a patient like Taluli sought medical care earlier, the growths could have been removed before they got so large, but they would likely still resemble bark rather than ordinary warts and likely keep returning.

"It's a complex interplay between the specific virus and your immune system," explains Dr. Daniel Finn, a dermatologic surgeon in Boston, who has seen a few cases of less aggressive forms of the disease. "It's not well-worked out who develops such an aggressive disease."

"Certain people with this condition are prone to developing a more extreme presentation," Garden adds.

When that happens, doctors are not sure what to do.

"There are no guidelines for treatment because it is so rare," Chernofsky says. But that didn't stop his team from trying.

Taluli, 42 and a father of six, hadn't been able to use his hands for 10 years and was in severe pain.

"This was ruining his life," Chernofsky says. Doctors in Jordan and Egypt had recommended amputation, and doctors at Palestinian hospitals in the West Bank told him there was no effective treatment.

"There was nothing to do," Taluli said in a statement released by Hadassah. Eventually, Palestinian and Israeli officials arranged for him to seek treatment at the medical center.

"Yes, it's a difficult case, but we thought that there is something you can do about it, " says Dr. Shai Luria, an orthopedic and hand surgeon at Hadassah. In late August, surgeons removed most of the growths, freeing the man's palms and fingers for the first time in years, Chernofsky says. The medical team also grafted healthy skin, taken from other areas of Taluli's body, onto his hands.

Due to the rare nature of the disorder, there was no protocol for the surgery, the doctors say. But for Taluli it was his only hope.

Now his hands appear as if they have been burned — discolored and rough-textured — rather than covered with lesions. That does not trouble Taluli.

"After years of sitting at home, ashamed and not being able to work, the surgeons here at Hadassah have given me hope," Taluli said in his statement, which was released shortly after the surgery. "I hope my former life is already behind me."

Earlier this week, Taluli returned home to Gaza with a supply of medications — which the Israeli doctors paid for personally — to prevent the growths from returning. The medications include topical creams used to treat warts caused by HPV.

Not only are they unsure of Taluli's prognosis, but they don't know if similar surgery and treatment would work on other severe cases of epidermodysplasia verruciformis. In the few cases reported in the media over the years, none has had the same form of HPV or same underlying genetic mutation as Taluli.

Even for ordinary cases of epidermodysplasia verruciformis, which result only in warts, "there are no great treatments," Garden says, saying that they are usually treated with topical medications but keep returning because patients with the disorder always have a suppressed immune system.

Nonetheless, treating the warts — or extreme tumors as Taluli had — from epidermodysplasia verruciformis is important because the lesions could turn into skin cancer, say doctors familiar with the condition.

"We are not promoting this as a scientific breakthrough," Chernofsky says. "But the main message here is that our team looked at this from a fresh perspective and did all we can to help this man."

Sara Toth Stub is a Jerusalem-based journalist. You can follow her work @saratothstub.