Accessibility links
Dirt Floor Replacement Project In Rwanda Is Up For Half-Million Dollar Prize : Goats and Soda A small project started in 2014 to replace dirt floors, which can make people sick, with sealed earthen floors. Demand has only grown — but not exactly in the way the CEO had imagined. 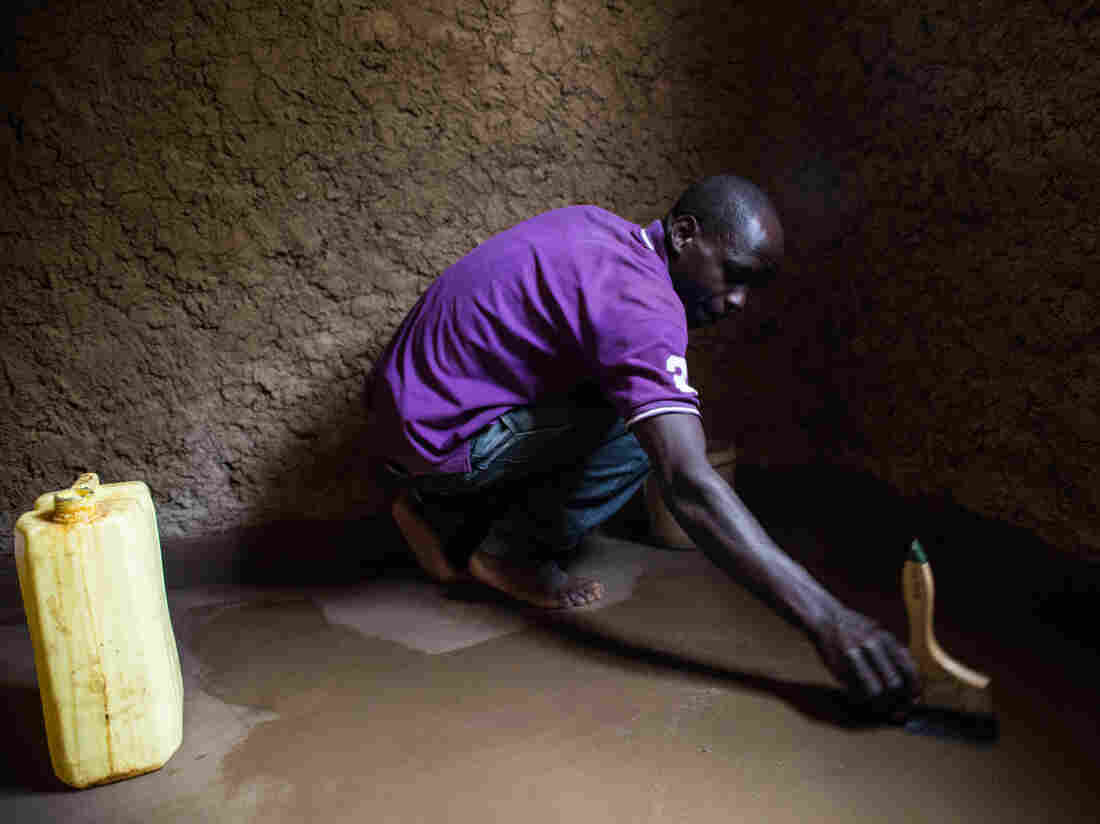 After an earthen floor is put down, it is covered with an oil-based floor sealant that hardens and makes it easy to clean. Jacques Nkinzingabo/Courtesy of EarthEnable hide caption 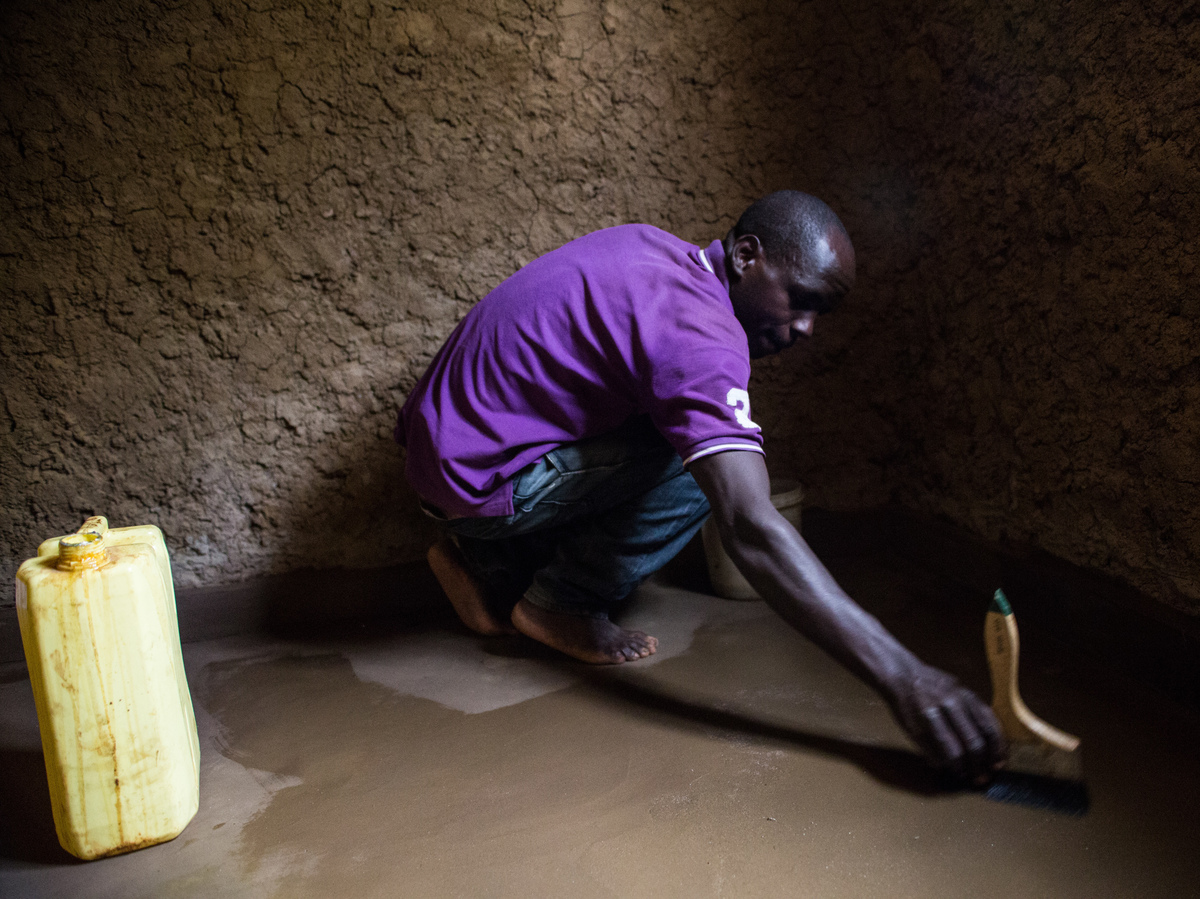 After an earthen floor is put down, it is covered with an oil-based floor sealant that hardens and makes it easy to clean.

When A Home Poses Health Risks, The Floor May Be The Culprit

Three years ago, we published a story about a small start-up in Kigali, Rwanda's capital, that was seeking to make homes more sanitary by replacing dirt floors with sealed earthen floors, which are up to 80 percent cheaper than concrete. Recognizing that dirt floors can make people sick — insects, parasites, and germs in the dirt cause diarrhea and other diseases — EarthEnable had come up with a low-cost way to create safer floors, trained 20 masons and tested its method in seven Rwandan homes. The group's challenge was to expand its service, maintaining quality while keeping up with demand. What's happened since?

"Where to begin?" says Gayatri Datar, with a laugh. In three years, the startup this Stanford MBA graduate co-founded has grown fast. It's provided floors to 9,800 people and hired 200 staff, including masons, sales representatives and support staff. It perfected its proprietary, oil-based floor varnish and sealant. Meanwhile, it also expanded its area of service to four districts within Rwanda and expects to start working soon in neighboring Uganda.

In the first year or so, demand grew fast. Datar and her team had to learn as they went along. "It helped us maintain our accountability and launched us forward," she says.

Datar and her colleagues struggled to keep up. They trained more masons, but the logistics of delivering truckloads of sand, gravel and other earthen flooring materials — not to mention shovels — to multiple sites in rural Rwanda presented a challenge.

They came up with the idea to train customers to prepare their own floors using materials they could obtain from shops stocking the right materials — a do-it-yourself option that would cost less.

The concept started to take off, Datar says, "but not as we envisioned." She and her team noticed that these customers began outsourcing the floor-building to masons unaffiliated with EarthEnable. "People don't really want to build their own floors," she says. "They don't have much time. They're quite busy in rural communities."

So the group ran with the idea, training and certifying the masons in its flooring practices — and instituting what Datar calls an "Angie's List model," in which customers rate the masons after their work. "They're held very accountable to customers," Datar says.

This decentralized model has become the most popular EarthEnable flooring service, costing about $80 and accounting now for 90 percent of business. But the group still offers full-service floor installation (called "Damarara" or "treat yourself") for $150 and a DIY "self-reliance" option costing about $50. Another model, a variation on the most popular option, would allow customers to use an EarthEnable compactor to prepare and compress the base of their floor and then bring in a mason to finish the job. "We are constantly pivoting, piloting and innovating," Datar says.

The group, which has received support from the U.S. Agency for International Development, the Mulago Foundation, Echoing Green and others, is one of five finalists this month in the Netherlands Postcode Lottery Green Challenge, an annual "sustainability innovation" competition with a 500,000-euro prize.

EarthEnable is a hybrid business, incorporated as a nonprofit in the U.S. but operating for-profit in Rwanda. It provides a small number of floors for free when testing new methods or floor colors.

"Treating people as customers and not as beneficiaries has shifted the whole way our business is done," Datar says. "From the customers' perspective, the experience is quite different." If people were receiving floors for free, she says, "They would not hold us as accountable for quality."

A call center and a customer service department provide additional support and have helped EarthEnable gain a reputation as being responsive and quick to fix problems, Datar says.

Last year, the group moved its headquarters out of Kigali and into a village in the rural area it serves, about an hour's drive away. Datar realized it was better to be near customers.

And earlier this year, demand started to emerge in Uganda, Rwanda's neighbor to the north, in a region experiencing infestations of parasitic chigoe fleas known as "jiggers" — a notorious problem with dirt floors.

Improving health was the impetus for starting EarthEnable, and the group is gearing up to begin work next year on a formal, randomized controlled study measuring the health effects of its floors in homes that previously would have been impossible to keep clean.