Accessibility links
Father Who Forced His Daughter To Wed At Age 15 Is Now Determined To Undo The Marriage : Goats and Soda He forced his 15-year-old daughter to marry a man in his 40s with little education and a reputation for drinking — and knew it was a mistake. 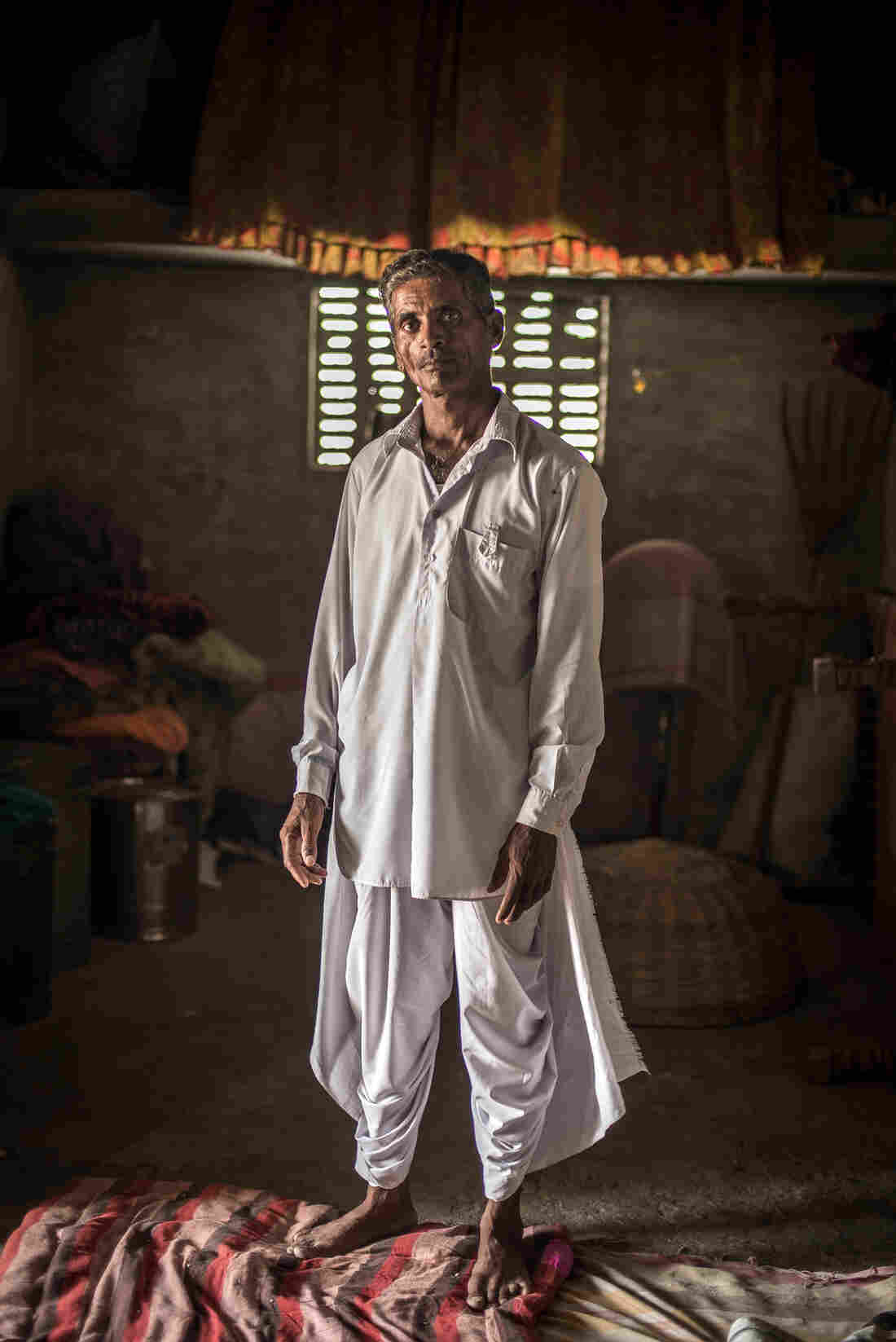 Lumbaram married his 15-year-old daughter to a man who was in his 40s and had a reputation as a heavy drinker. It was part of a family trade. That same night, Lumbaram made a vow to her: "I will fix this." Poulomi Basu/VII Mentor/for NPR hide caption 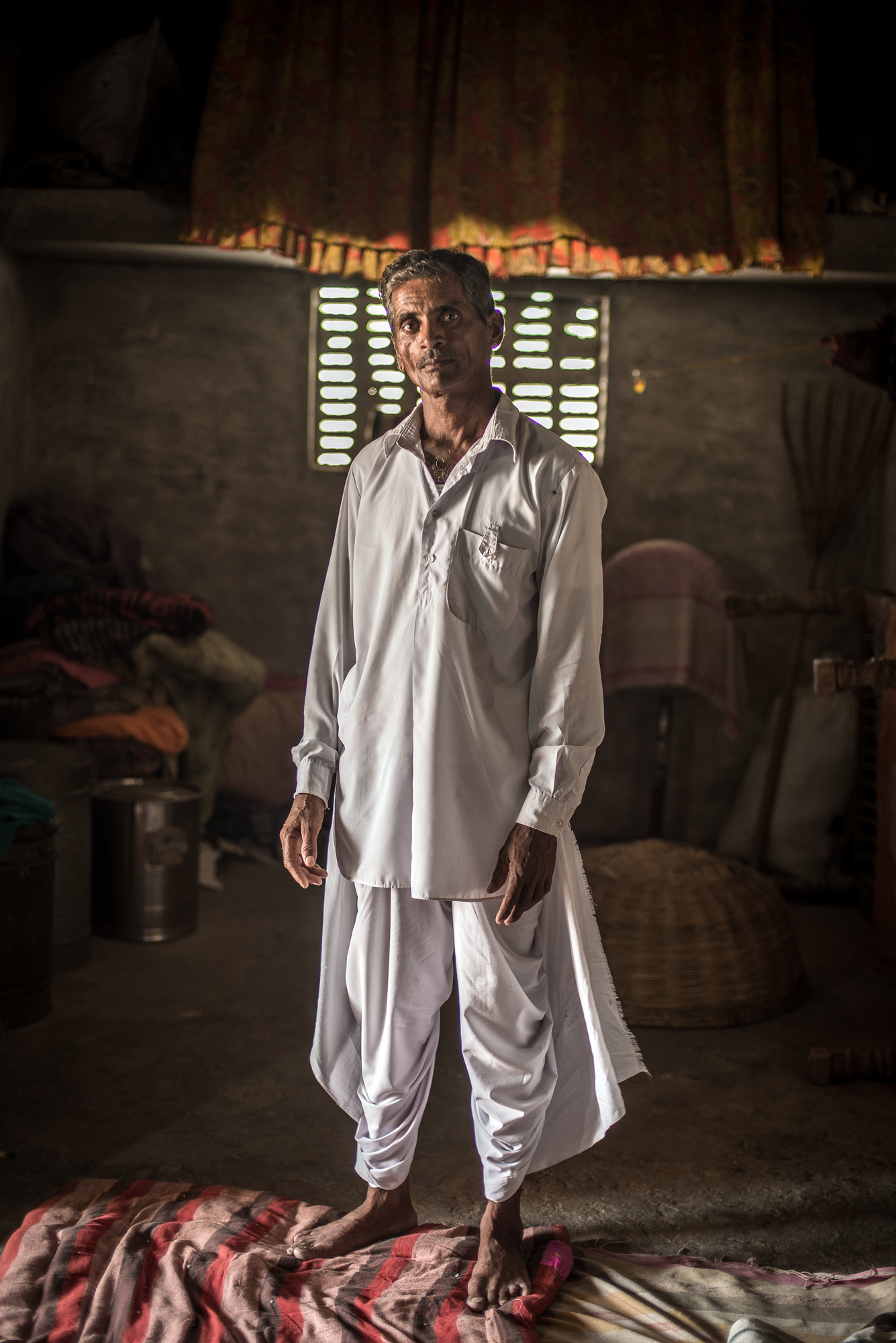 Lumbaram married his 15-year-old daughter to a man who was in his 40s and had a reputation as a heavy drinker. It was part of a family trade. That same night, Lumbaram made a vow to her: "I will fix this."

Last August we brought you the story of Lumbaram, a father in a village in Northern India who was on a quest to rescue his daughter Durga from a marriage that he had forced her into.

Lumbaram — who like many Indians goes by only one name — had agreed to the wedding six years earlier when Durga was just 15 years old. He had done so at the insistence of his own parents. They were trying to find a wife for one of Lumbaram's brothers. And because women are scarce in their community, Lumbaram's parents made a trade with another family: That family pledged a girl to marry Lumbaram's brother, and Lumbaram gave up Durga to marry one of the men on their side.

Such swaps are common in the region, as are child marriages — even though the practice was outlawed in India decades ago. But even by the standards of their village, Durga's husband was a terrible match: He was in his 40s, had little schooling and had a reputation as a heavy drinker. What's more, Durga was being tied to him just as a far brighter future seemed about to open up for her. A few months earlier she'd started middle school in the nearby city of Jodhpur, thanks to a charity that offers free room, board and tuition to village girls who would be otherwise unable to study beyond elementary school. 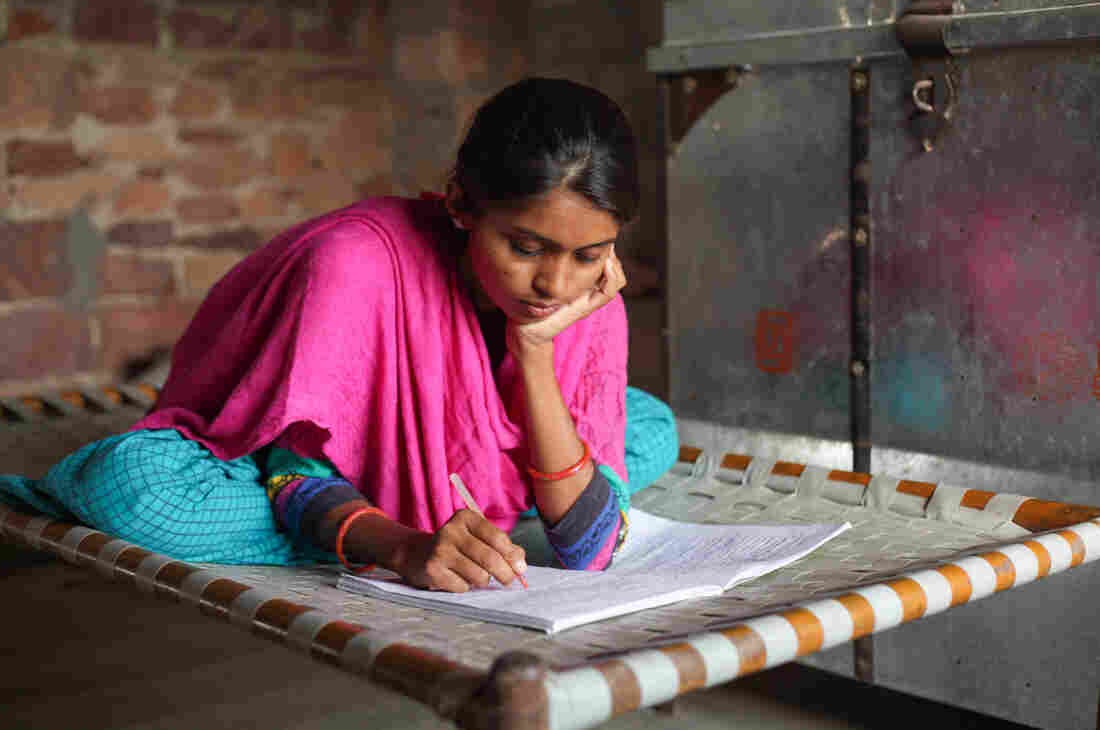 Durga has just earned her undergraduate degree. Because of her accomplishment, the groom and his family have said they no longer consider her a good match. "They are scared of an educated bride," says Durga's father, Lumbaram. Swati Vashishtha for NPR hide caption 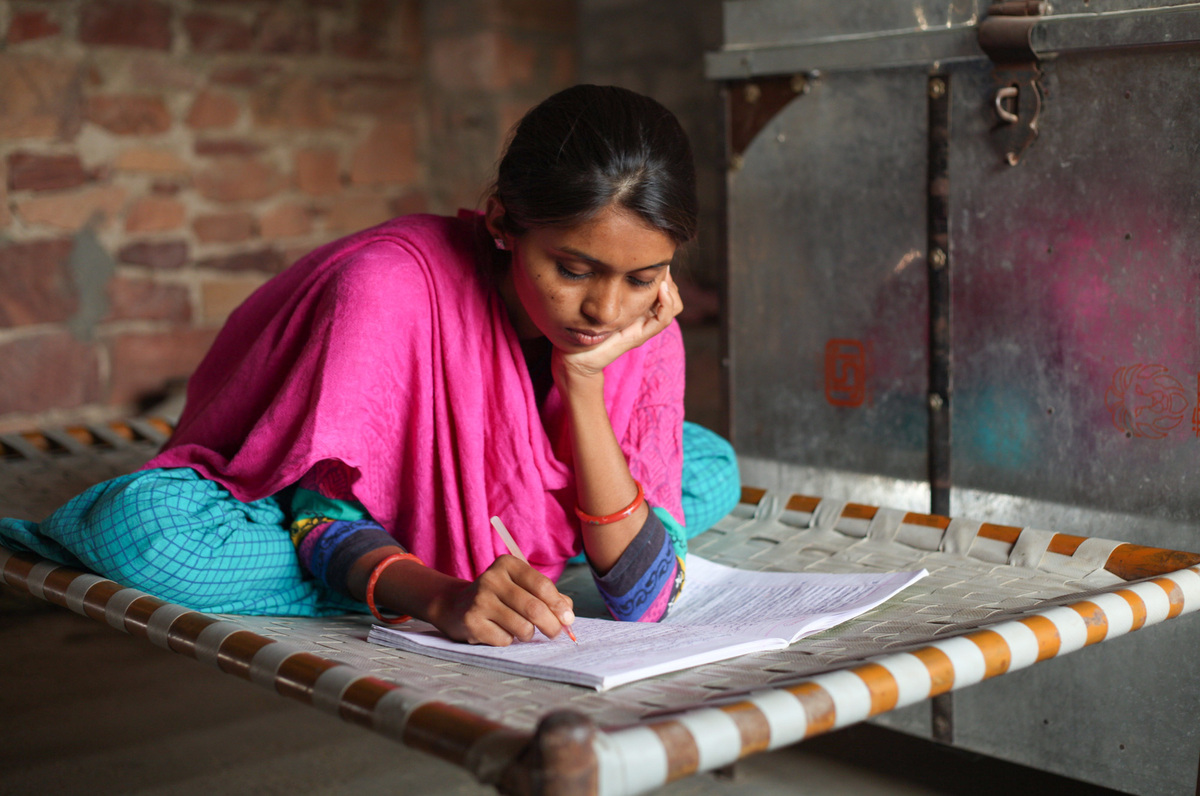 Durga has just earned her undergraduate degree. Because of her accomplishment, the groom and his family have said they no longer consider her a good match. "They are scared of an educated bride," says Durga's father, Lumbaram.

Watching the wedding ceremony Lumbaram was overcome with guilt. That night he made a vow to Durga: "I will fix this."

It was a daunting challenge. To break the marriage, Lumbaram would need permission from a group of elders. Typically they require a father who wants to end a match to pay the husband's family a fine of about $7,000 — an unaffordable sum for Lumbaram, who makes his living as a construction worker. Ending the marriage without the elders' signoff was technically possible. After all, the elders have no legal authority. But they would have declared Lumbaram ostracized for life if he were to act without their approval. No one would do business with him. Even his relatives wouldn't be able to talk to him.

So Lumbaram set about playing a long game. First, he used the boarding school as an excuse to delay the start of Durga's life with her husband, telling him, "As long as she's getting a free education I won't send her to live with you." Lumbaram was able to keep the groom at bay even as Durga went on to graduate from high school and enroll in a local college.

He hoped to put off the day of reckoning in front of the elders until Durga got more education than anyone in the village. At that point, he thought, the elders would have to agree that it would be ridiculous to hold her to the marriage.

In the meantime, Lumbaram also sought to improve his chances by subtly working to persuade people in the community of the value of educating girls. He went house to house making the case to scores of other fathers that it was worth sending their own girls to be educated by the charity, called the Veerni Institute. He was so successful that by early 2016 he even got a group of the fathers to publicly declare that they would stop marrying off underage daughters and allow them to pursue an education instead. In other words, in the course of trying to save Durga, Lumbaram has already saved dozens of other village girls from early marriage.

Yet as of August 2016, Durga's predicament remained unresolved. Lumbaram told us he was planning to bring his case before the elders just as soon as she got the results from the final exams for her second year of college.

Lumbaram tells us that instead of going straight to the elders last fall he ended up deciding to wait one more year — and then first try taking up the matter directly with Durga's husband. The reason: If Lumbaram can get Durga's husband to agree to end the marriage, there will be no risk of a fine. When both parties want to end a marriage the elders don't need to pick sides and exact a punishment on the one they deem in the wrong.

For the moment, negotiations with the husband remain in a delicate stage. But there has been progress. Lumbaram says his last conversation with the husband was about three months ago, just after Durga took her exams for her third and final year of college. Lumbaram says he told the man and his extended family that the only conditions under which he would send Durga to live with them is if the man quit drinking and smoking and if the man's family agreed to allow Durga to continue her studies after she earns her undergraduate degree and cover the cost. As Lumbaram expected, they refused to accept those conditions.

And in a hugely promising development, the husband appeared to indicate that he, too, now wants to break off the marriage. He and his family no longer consider Durga a desirable match. "They are scared of an educated bride," says Lumbaram.

There still remains the business of actually dissolving the marriage. To do so, Lumbaram and Durga's husband will have to formally go before a gathering of the elders. To ensure full community acceptance, Lumbaram wanted to wait until Durga got her final exam results. Those are now in and Durga is officially a college graduate. Lumbaram says he thinks the meeting with the elders will happen as soon as October or November, once the harvest season is over and community members have time for such gatherings.

But it may be a while longer still, cautions Mahendra Sharma, director of the Veerni Institute, who remains in close touch with everyone involved. Convening such a gathering means sponsoring a feast for dozens, if not hundreds, of people, says Sharma. So he suspects both Lumbaram and the husband will try to avoid that expense by waiting until some other event brings the elders and the community together — a funeral for a particularly respected member, for instance — then seize the opportunity to end Durga's union.

While Lumbaram says he's enormously pleased by the direction things are going, a part of him still worries that when the time comes, Durga's husband will try to extract a fine from him. Sharma is more optimistic because he's heard from many others in the community that the husband has publicly stated his wish to end the marriage. That will make it difficult for the man to change his tune once he and Lumbaram finally go before the elders. "I've discussed this with many villagers," says Sharma, "and they all genuinely feel that this marriage is over."

Already, adds Sharma, the effect on Durga has been noticeable. "She's so relieved. Before she never wanted to talk about it. Whenever anybody brought it up she'd say, no, she couldn't bear to think about it. Now she talks frankly about how it's all over. How she feels she has a beautiful life ahead of her. How she's so keen to start her new life."

Durga thinks she might go for a master's degree in a subject that would improve her long-term job prospects. She's also interested in a position with the army. She plans to take the written qualification exam as soon as it's scheduled. If she passes she would face one more hurdle: a physical exam.

So Durga is working to get herself in top shape. "She's running in the village, doing exercises," says Sharma.

But in a culture where arranged marriages are the norm, he adds, "She knows her father is looking for a very good new groom for her."

Lumbaram confirms that while he hasn't discussed it with Durga yet, he does have a few prospects in mind. All of them are around Durga's age, he says. "Bright, well-behaved and well-spoken."