Accessibility links
South Asia Flood Reveals Tensions Between Local And Global Aid Groups : Goats and Soda Community-based charities are at the front lines of the flood response in South Asia. But global charities get almost all the attention — and money. 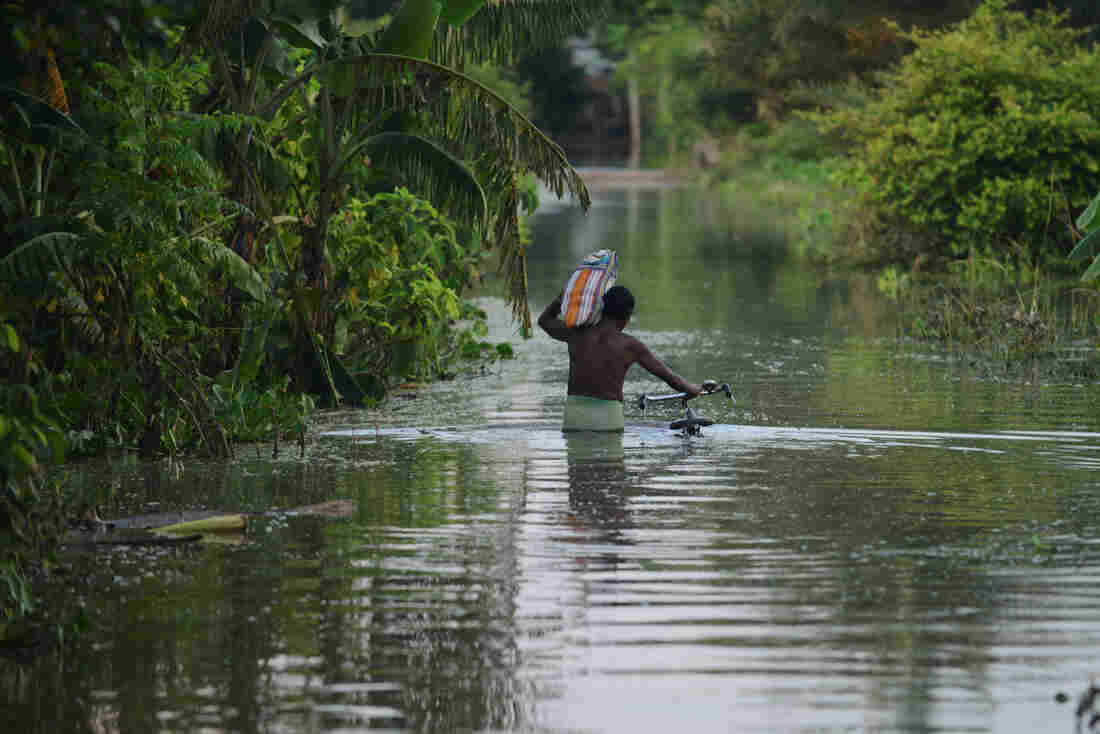 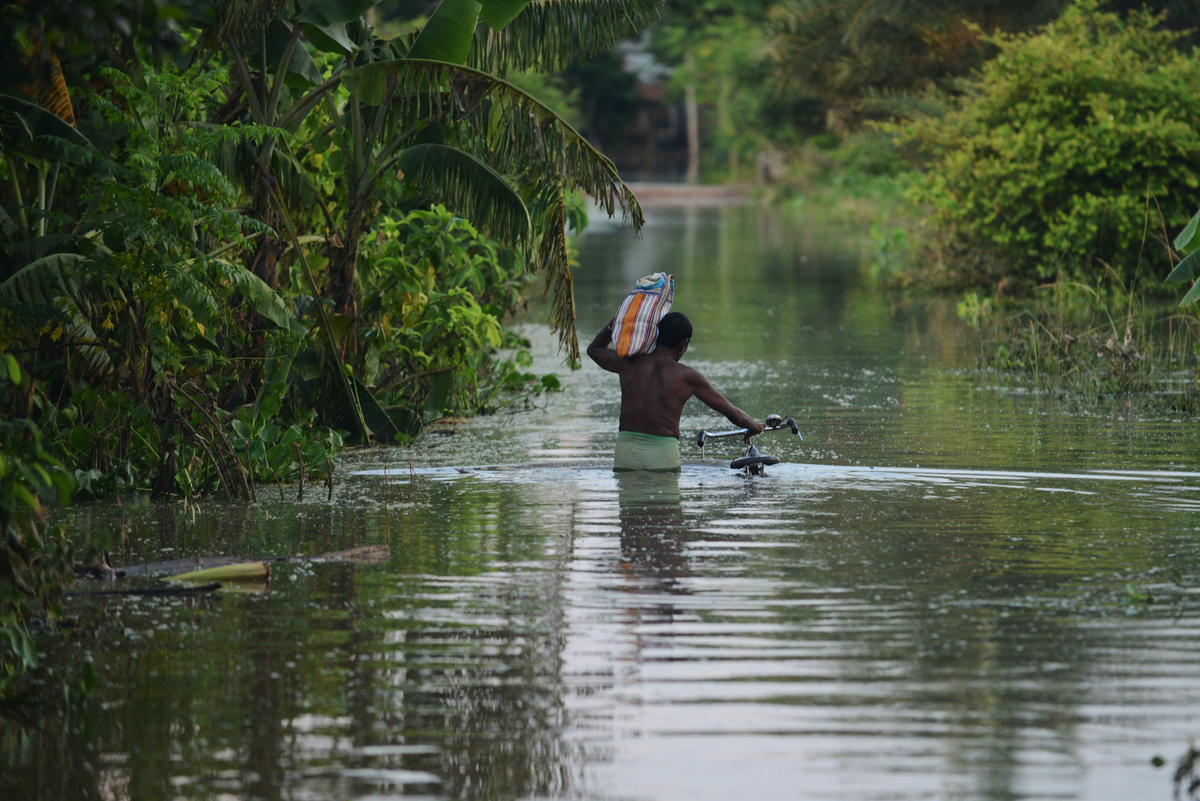 An Indian villager wades through floodwaters in West Bengal on Aug. 23.

The mid-August monsoon floods in South Asia were the worst in a decade. But for Rajdeep Bora, it's a familiar feeling.

"We suffer two to three floods a year," says the 29-year-old farmer, who lives in Gohpur, Assam, in northeastern India. Last month, his 2-acre rice crop was ruined and he lost two cows — worth about $800.

"The loss of livestock is heartbreaking enough," he says. "But the morning after a flood, there is no clean water to drink. Mobile services and transport shut down. In some parts of Assam, floodwaters don't recede for as many as two months."

But he doesn't feel he's been forgotten. An Indian relief group called SRISTI is there to help: "They give us essential supplies that are a godsend — clean water, clothes and food." And that's not all. "They helped me reclaim my fields, even connected me with merchants who buy rice throughout the year."

Local groups like SRISTI are the unsung heroes in post-disaster recovery. "They know the community much better. They understand the culture. They're there when the crisis occurs," says Paul Spiegel, a former senior official at the U.N. High Commissioner for Refugees and a professor at Johns Hopkins University. "That's a very big benefit."

But when it comes to getting donations and grants, small groups like SRISTI can't compete.

Of course, the big, international aid groups like Save the Children and Oxfam can work at a scale that smaller groups can't match. And that's critical in a disaster like the Asian floods, which killed nearly 1,300 people and affected 45 million people across the region, according to UNICEF.

The big nongovernmental organizations (NGOs) have their benefits. For one, a connection to major funders like USAID, the government of Canada and the European Union, says Spiegel. They also know how to navigate the often complex financial requirements and paperwork to obtain millions of dollars in emergency funding.

Those funds allow big NGOs to bring together more staff, more aid, more resources — for example, new strategies that have been tested in previous emergencies, like cash aid — or logistical knowledge from experienced humanitarian workers who know how to distribute food, clothing and blankets on a massive scale.

For example, the international aid group Catholic Relief Services and its local partners are providing emergency relief to over 39,000 flood victims in India, according to its spokesperson. By contrast, Humanitarian Aid International, an Indian aid organization, is distributing the essentials to 900 families in the states of Assam and Bihar, India.

The smaller groups, meanwhile, are frustrated by their lack of funding.

In 2015, relief groups received $4.2 billion in humanitarian funding — but local and national NGOs combined received just 2.3 percent of it, according to a 2016 report by Development Initiatives. A whopping 76 percent of that funding went to major international NGOs — of which almost half was received by 10 organizations.

Nonprofits like GlobalGiving are trying to change that. The U.S.-based group raises funds for small, local NGOs around the world. The idea is "to help those NGOs get the visibility and funding that only larger NGOs get," says Alison Carlman, the charity's director of impact and communications.

So far, the charity has raised more than $68,000 for the floods in South Asia from mostly U.S. donors, which will be split among 11 local NGOs. But Catholic Relief Services is spending $429,000 in the three affected countries.

The funds from GlobalGiving aren't enough for what Deepak Sharma wants to do. He's the CEO of Rajasthan Samgrah Kalyan Sansthan, a relief group helping with flood response in villages in western Rajasthan in India that needs $140,000 to provide relief. That would go toward everything from manure to medicines and mosquito nets for 200 families affected by the floods in the area, which is seeing a surge in mosquito-borne diseases like malaria and dengue fever.

While Sharma has access to a pipeline of funds from Western donors through GlobalGiving, other NGOs aren't as lucky. Ram Chandra Neupane, the head of a national NGO called Environment and Child Concern Organization-Nepal, has not been able to obtain funds for the flood response in Nepal this year, he wrote in an email to NPR.

The government has been no help, he says. Emergency aid funding to local-level NGOs? "We don't have that kind of policy in Nepal."

The Indian government does offer financial support to national NGOs. But a group must have been in existence for three years before that can happen, says Uttam Barkataki, executive director of SRISTI, the organization helping Bora the rice farmer and other flood victims in his area.

That's if they make it. "It's very hard for smaller NGOs to survive on their own for that long," he says.

In most cases, the two types of NGOs collaborate in times of emergency. It's like "building a house," explains Tony Castleman, Catholic Relief Services' country representative for India, Bangladesh and Nepal based in New Delhi. "You need an architect. You need someone who has skill in making bricks, transporting bricks, doing the glasswork and the windows. We bring different but complementary skill sets."

But what ends up happening is that big NGOs' knowledge and expertise aren't transferred to the little guys, says Spiegel. "There's no sufficient incentive to train and build up the local NGOs," he says. "If [those groups] had sufficient capacity to deal with disasters on their own it would eventually put international organizations out of a job."

Many local groups feel it is an unequal partnership. Neupane, who has seen the dynamic between large NGOs and its national partners in the aftermath of Nepal's earthquake, feels that big NGOs have "attitude problems," he wrote NPR via email. Large NGOs want authority, he explained. They want to control everything from the funding to the type of technology local NGOs use to distribute aid, he says.

Neupane sees some hope in the Charter for Change, an initiative that addresses some of those tensions. The petition, introduced at the World Humanitarian Summit in May 2016, urges relief organizations to commit to eight promises. That includes giving credit where credit is due — mentioning the names of local partners to the press, for example — and giving a minimum of 20 percent of their funds to local NGOs.

So far, the petition has been signed by 150 organizations in 43 countries, including 28 international NGOs, including Catholic Relief Services, Oxfam and CARE.

Sudhanshu S. Singh, CEO of Humanitarian Aid International, thinks about what he'd do if he had the extra money, staff, resources. He'd help the poorest families in the community prepare for the future.

"These people's houses have been washed away. Their belongings are gone. They are left with nothing," he says. "We want them to be in a better position to face the next floods on their own."

With additional reporting from Danielle Preiss in Kathmandu, Nepal, and Kamala Thiagarajan in Madurai, India.