Accessibility links
Patient Guns Down Red Cross Worker In Afghanistan : Goats and Soda Lorena Perez was a physiotherapist. On Monday, a patient in a wheelchair shot and killed her. The motive is not yet known. 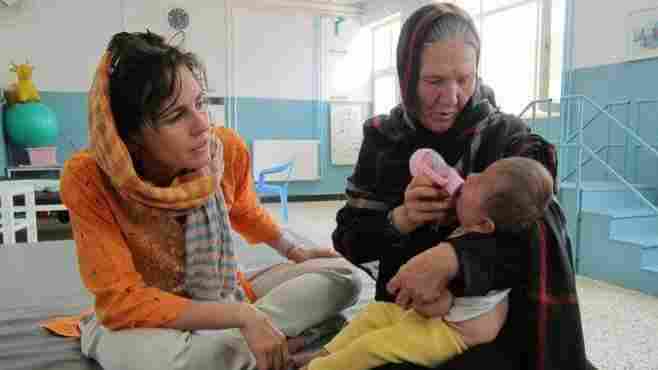 Lorena Enebral Perez (left), who was shot and killed on Monday, had worked as a physiotherapist for the Red Cross since May 2016. Courtesy of Monica Barnabé hide caption 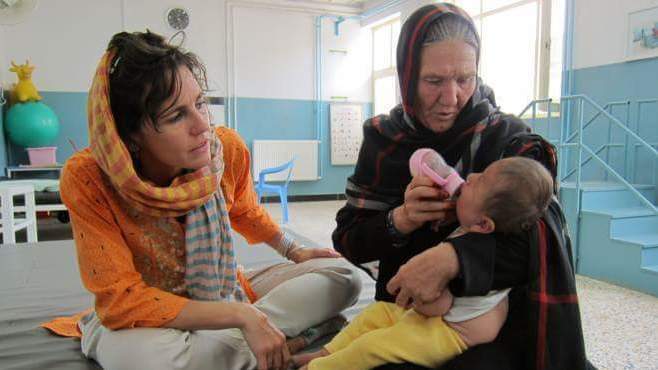 Lorena Enebral Perez (left), who was shot and killed on Monday, had worked as a physiotherapist for the Red Cross since May 2016.

She was working with children who had cerebral palsy in Afghanistan. At around 10:15 Monday morning, she stepped outside of the ward to approach two patients in the orthopedic center. One of them, a man in a wheelchair, took out a gun and fatally wounded Lorena Enebral Perez. He had been a patient at the orthopedic center in Mazar-i-Sharif for 19 years, having first visited the center at age 2 to be treated for polio. She was a Spanish physiotherapist on her first mission with the International Committee of the Red Cross.

Perez, 38, started working for the ICRC in May 2016, flying between orthopedic centers in Kabul, Herat and Mazar-i-Sharif. Her work meant so much to her that she decided to extend her mission. She was supposed to finish this December, says Thomas Glass, ICRC's head of communications in Afghanistan.

"All she wanted to do was help," says Glass. "Our hearts are really broken right now."

Afghanistan has seven orthopedic centers, including the one in Mazar-i-Sharif where she was killed. Afghans go for physical therapy, fitting of prosthetic limbs and treatment for congenital diseases that affect mobility. Most of the staff are former patients. Glass calls it a sanctuary where ICRC provided some 280,000 treatments last year. After the shooting, operations were suspended for at least the remainder of the week.

According to Glass, ten ICRC workers have been killed in Afghanistan since 2001, the year of the U.S. invasion. The ICRC has been continuously present in Afghanistan for the past 30 years. The gunman who shot Perez was arrested; his motive is not clear at this time.

"We're completely devastated and shocked by how a person who has been benefiting from our care for so long would take the life of somebody who was there to help," says Glass. He spoke to NPR by phone from Kabul. The interview has been edited for length and clarity.

Lorena was a true Spaniard. She spoke English with a very thick Spanish accent. She had a cupboard full of comfort food from back home that she absolutely insisted on sharing with everybody. Everything from chorizo to Spanish ham. The best things that Spain could produce, she had it. She could prepare it as if you were in a Spanish restaurant. This kindness was just so natural with her.

What kind of security was in place at the hospital where she worked?

The orthopedic centers are enclosed facilities with guarded entrances. The guards that we have are unarmed. This is an ICRC policy — we do not carry weapons. We are a facility clearly marked with the ICRC emblem, the Red Cross emblem. And there is a very clear no-weapon policy in place. We do the utmost to ensure the security of our staff but also our patients. So this is why we have guards at the entrance that control the flow of people coming in. And do security checks and pat-downs. And make sure everybody abides by the rules.

What steps will be taken to improve security after this?

We're going to have to take the right measures to make sure such an act never happens again. We're still reeling from the emotional agony we've been going through today. It's just the first day. Our focus is really on getting Lorena back to her family.

Is the area where Perez was killed known for violence?

The northern region of Afghanistan is extremely volatile. There has been an increase in conflict in the last few years in that zone. Seven months ago, we suffered one of the worst attacks in ICRC history where six of our colleagues were shot and killed, and two were abducted. It was only six days ago that we managed to secure the release of the two colleagues who had been kidnapped.

How have years of armed conflict in Afghanistan affected ICRC workers?

It has greatly affected the access we have in different areas. We are extremely cautious on our movements, how we go from one place to another. We make sure we have security guarantees from all the different parties to the conflict. If people who are there to help cannot reach the people they need to help, then it makes the situation so much worse for everybody.

How does this tragedy affect humanitarian organizations at large?

It's a strong reminder that despite all the calls to action, these types of tragedies continue to take place. Aid workers should not be a target. They should not be subject to such senseless acts. [Yet] being a humanitarian aid worker on the ground is becoming more and more treacherous.

And the sad reality is that, I hate to say it, but it's going to happen again.

After this tragedy, what do you say to people who are considering becoming humanitarian aid workers?

I would tell them your help is needed. Be aware of the risks, that's for sure. We're willing to take risks because it's something larger than ourselves. It's about helping people and making a difference in their lives. This is a senseless act, but it will never take away all the thousands of beautiful acts by Lorena, all the lives she changed for the better. The world needs more Lorenas.