Accessibility links
Mongolia's Women Are Better Educated Than The Men — But Still Must Fight For Equality : Goats and Soda They're better educated than men and have lower rates of unemployment. Yet they still run up against the patriarchy. A group called Women for Change wants to change that. 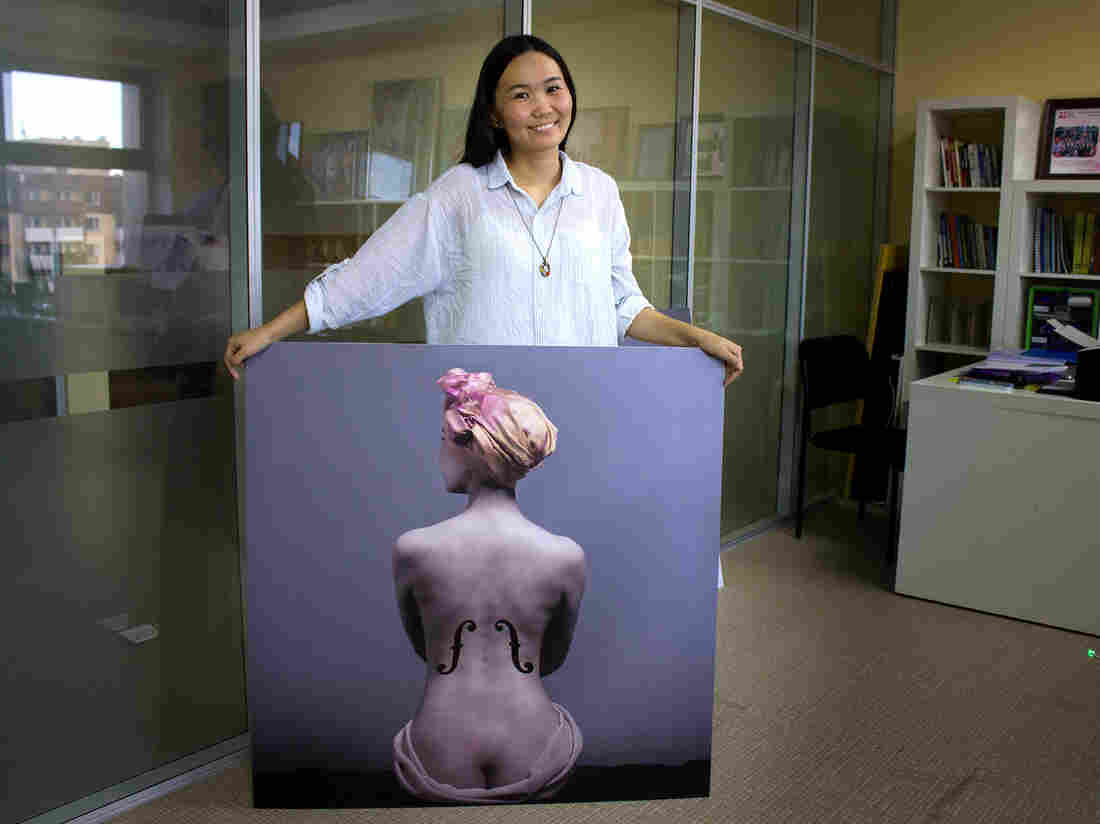 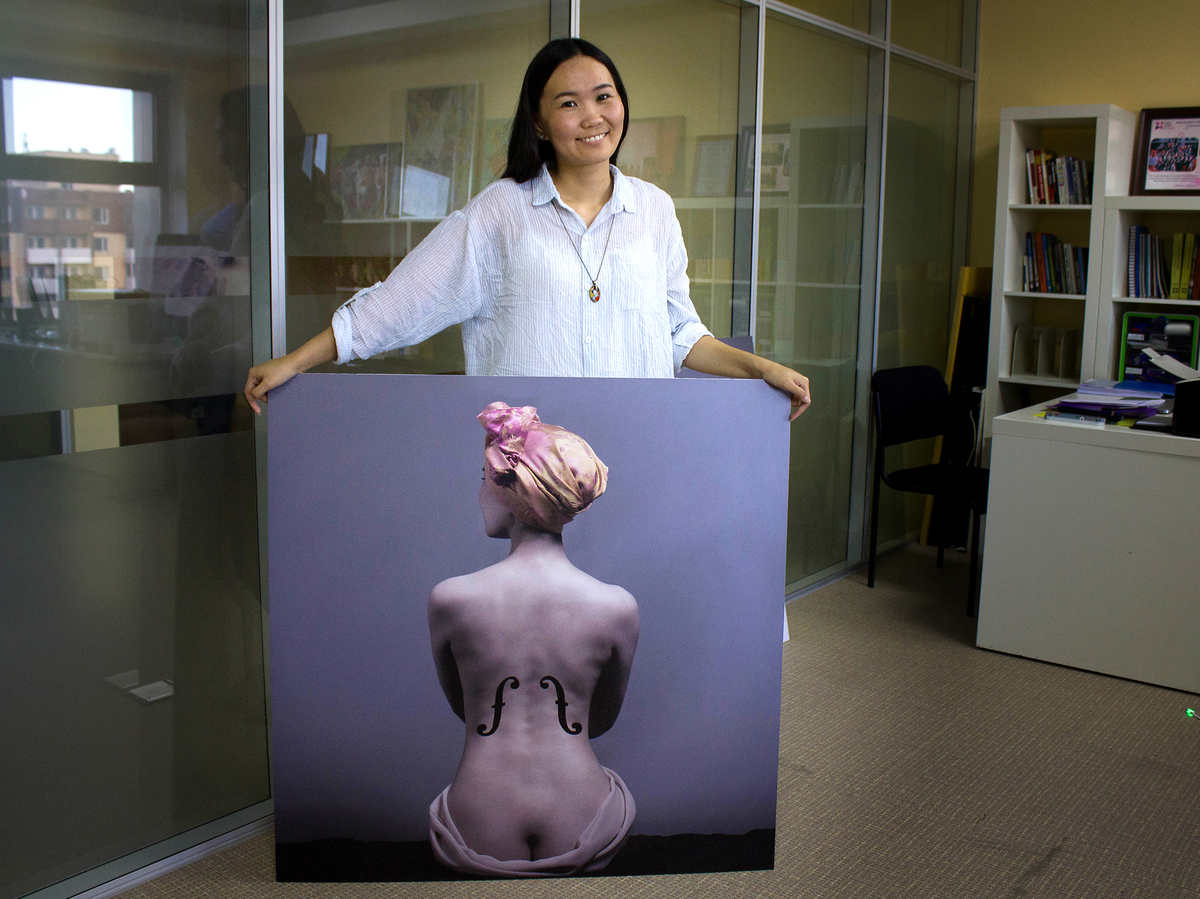 Gerelee Odonchimed, vice director of Women for Change, modeled for this half-nude photo.

Gerelee Odonchimed was 23 the first time she said the word vagina. It was 2011 and she had recently joined a new women's rights group in the Mongolian capital of Ulaanbaatar. For their initial project, the group decided to stage The Vagina Monologues, a play where women speak about their vaginas.

The topic isn't something Asian and Mongolian women usually talk about, says Zolzaya Batkhuyag, the group's co-founder. So she assigned the women homework. After rehearsal cast members were told to use mirrors to "say hi to their vaginas." Six years later, Batkhuyag, who is 34 and speaks fluent English, laughs at the memory: "Our first project was crazy, so after that nothing is crazy for us."

Founded by four young lawyers, the group announced their first meeting on Facebook. Back then they called themselves Young Women for Change. They have since dropped the "young" to be more inclusive. They now count more than 80 members. Half a dozen of those members met at their new office on a Friday evening in early August. Their 13th floor headquarters in a modern building in Ulaanbaatar is a reminder of how far they have risen in a short time. 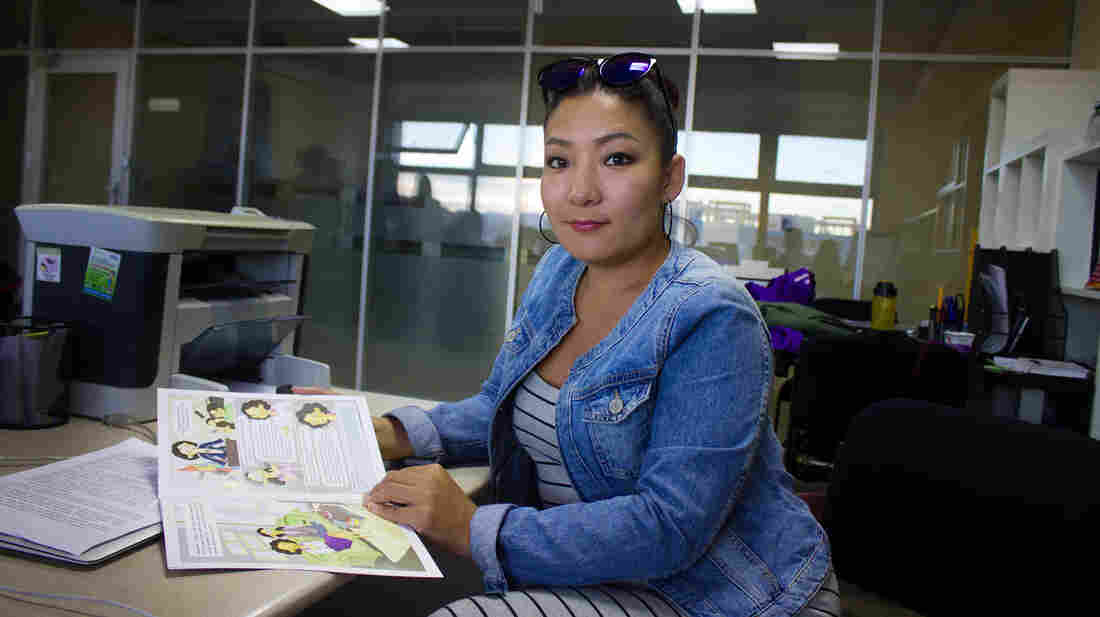 Narantulga Buriad with the comic book about domestic violence that she illustrated. Katya Cengel for NPR hide caption

Strong women are not new to Mongolia. Unusual for a developing country, Mongolian women are actually better educated than men, accounting for 62 percent of college, university and institute graduates in 2015, according to the National Statistics Office. They have lower rates of unemployment than their male counterparts and on average live 75.1 years — a decade longer than men.

Tim Jenkins, communications officer for United Nations Population Fund (UNFPA) Mongolia, remembers the curiosity the group drew several years ago when they produced a large graffiti piece of a woman breaking through chains. Now he sends other young artists to the site to seek inspiration. More recently the organization created a comic book to draw attention to domestic violence, a move timed to coincide with the 2016 revised law that finally made domestic violence a crime. Reliable statistics are hard to obtain, but according to UNFPA an estimated one out of every three Mongolian women suffers from domestic violence.

Growing up in Gobi-Altai Province in the southwest of the country, Odonchimed says she experienced the issue firsthand. In the early 1990s after the collapse of communism, many families suffered in the economic and social chaos. Raised largely by her grandmother, Odonchimed says her father drank and was abusive.

"I think it's the same for most Mongolians," says Odonchimed, who is dressed in fashionably ripped jeans and a white button-down shirt. "Most of them were experiencing domestic violence."

It was not until after she began studying law and joined Women for Change that Odonchimed talked about her experience. Now in her role as vice director of the organization she is eager to share her story and draw attention to other women's issues, such as body image. When the group decided to recreate classic paintings by photographing women in nude and partially nude poses, she volunteered to pose with a bare back. While Odonchimed enjoys having her photo taken and is slim and young, other models revealed bodies that are not always thought of as beautiful because they are heavier or older. The idea was to show that there is beauty in all body types.

Their innovative projects would not be possible if it weren't for the organizations that came before them, says Batkhuyag. These organizations, established after the democratic revolution in the early 1990s, created the space and environment for the young women behind Women for Change — who, unlike their predecessors, have been exposed to free media, democracy and a variety of cultures. Batkhuyag also credits the media with helping spread the organization's message.

"Because of Facebook or social media, we can spread or disseminate our information to all the young people," she says.

Budee Mendbayar decided to join after learning about the organization's Professional Women Leadership Program on Facebook. At university, Mendbayar, now 33, remembers how only the female students were expected to stay after to clean the classroom. Later, when working for the government, she noticed the same trend. Women were always asked to make coffee and tea no matter their position. The men, she says, were never expected to help out.

"I felt it was not right, but it's hard to tell them it is not right because it is already tradition, already accepted culture," she says.

Batchimeg Batsuren is more than a decade younger than Budee, just 22, but she too recalls being treated differently because of her sex. As a child she was made to clean up while her brothers went out to play, a role that she was told would prepare her for marriage. She joined Women for Change after reading Sheryl Sandberg's 2013 hit book Lean In: Women, Work, and the Will to Lead. Dressed in a purple hoodie and jeans, she loves to talk about soccer. In addition to being the group's project officer she coaches a local male soccer team and can frequently be found watching local and international games. People question why a woman is interested in the sport, she says, but she shrugs off the comments.

Bolormaa Mashlai, chairwoman for the non-government organization Women Leader Foundation, belongs to a different generation. Instead of partial nude art photographs, her office features a framed picture of Margaret Thatcher. At 50, Mashlai favors skirt suits and wears her shoulder length hair in a sensible ponytail. Her English is self-taught and heavily accented. In 2005 she became the first head secretary of the newly created National Committee on Gender Equality. She filled the role again from 2012 to 2015. While she appreciates Women for Change, she admits it is not aimed at her generation, which is more conservative and traditional. The current movement is being shaped by women who have been influenced by social media and exposure to other cultures through language and the Internet.

"They have open eyes and are discussing women's right more," she says.

In the four years she has been in the country, UNFPA Mongolia representative Naomi Kitahara has also noticed an openness and sense of hope in the younger generation that came of age after the fall of communism.

"They're flexible in their thinking," she says. "They have that energy of trying out new things."

Mendbayar credits the group itself for part of that confidence. When she lost her government job after the election of a different party, a common occurrence here, she also lost her confidence. The women in the organization helped her gain the confidence she needed to find a new job as a development specialist at a mining company.

"Now I can say, 'Yes, I can do that.' Because even if I fail, I have the community. I have my sisterhood, they can support me," she says.

Jenkins, with UNFPA, has met a number of young women that he says have been emboldened by Women for Change's actions: "Like in every culture, for every women's movement, each generation takes it a step further."

Katya Cengel is the author of the upcoming "Exiled: From the Killing Fields of Cambodia to California and Back." She reported from Mongolia on a fellowship from the International Reporting Project (IRP). You can find her on twitter @kcengel

An earlier version of this story incorrectly stated that an estimated 1 in 5 Mongolian women suffers from domestic violence. The correct figure is 1 in 3.