Accessibility links
How U.S. Hurricanes Are Complicating Global Aid Response : Goats and Soda Fundraising shortfalls. Staff operating at full tilt. How this epic season of hurricanes in the U.S. is complicating the response to global crises. 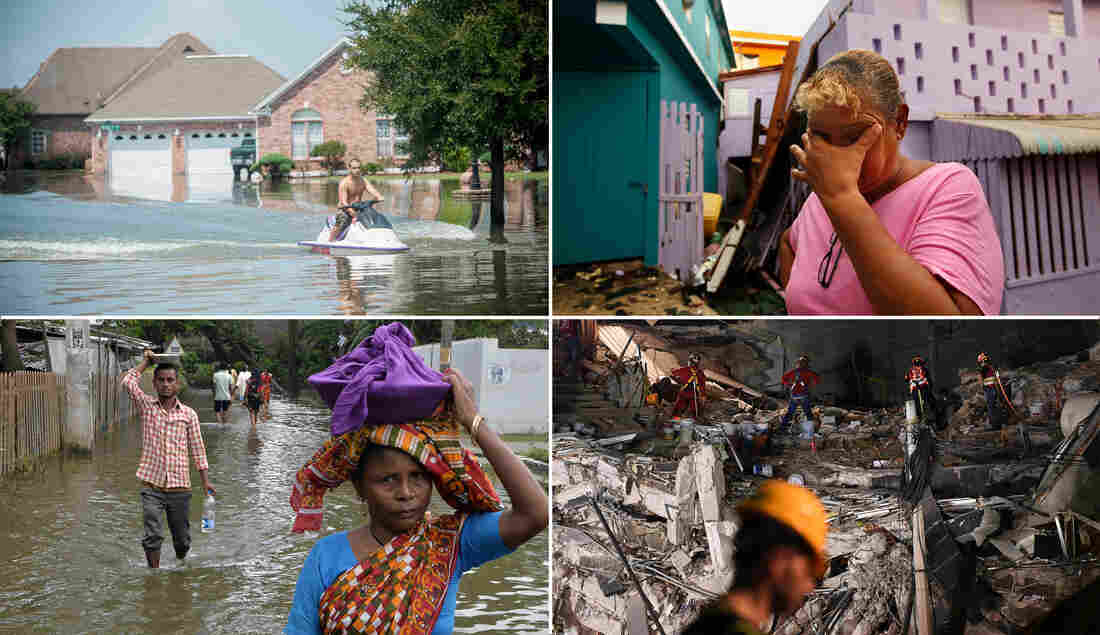 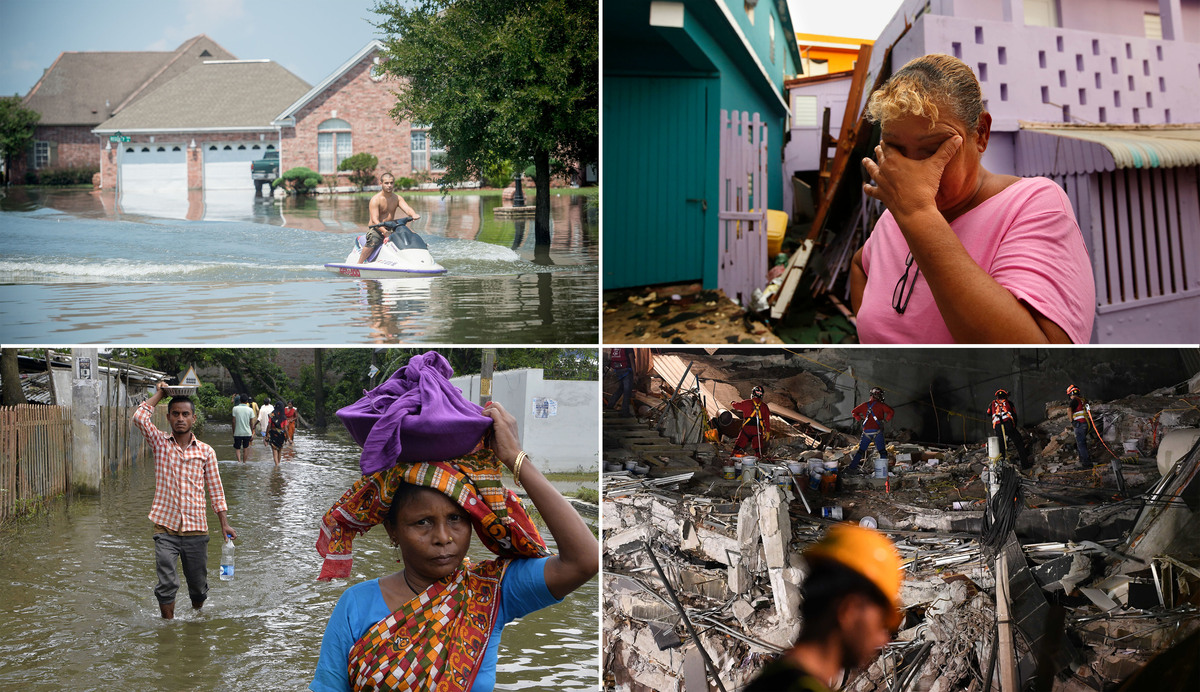 Clockwise from top left: Flooding from Hurricane Harvey in Texas. A victim of Hurricane Maria in Puerto Rico. Rescuers search for survivors after the earthquake in Mexico. Monsoon flooding in India.

The charity World Vision International is a major provider of disaster relief across the globe. So when Hurricane Harvey hit Texas, the group's office in the United States revved up its fundraising big-time.

Then came the big earthquake in Mexico that killed more than 340 people. That fundraising appeal netted $150,000. And for Hurricane Maria — which has left many of the 3.4 million U.S. citizens in Puerto Rico without reliable sources of power, food or even water — World Vision has only taken in about $100,000.

"There is clearly evidence of donor fatigue," says Clark. "There's just a limit to the amount of responses that we can successfully fundraise for."

Donor fatigue is just one of many ways that organizations and U.S. government agencies that handle disasters are feeling the pressure of a unique pileup of catastrophic events.

"I would say it is somewhat unprecedented," says Leisel Talley of the epic cascade of disasters. She is leading the international component of the Centers for Disease Control and Prevention's response to the hurricanes.

"This year has been particularly challenging."

Talley says it's not just that the U.S. has been clobbered with multiple disasters in a row — with the fires in California the latest. It's that this happened alongside a cascade of new crises overseas since August. Besides the Mexico earthquake, there was a landslide killing a thousand people in Sierra Leone. And in Bangladesh, half a million Muslim Rohingya refugees have poured in, fleeing violence in Myanmar.

All this has happened as the world was already grappling with some of the largest humanitarian crises since World War II: 20 million people at risk of dying from starvation and disease due to conflicts and drought in Nigeria, Somalia, South Sudan and Yemen.

So within the U.S. government it's not just exclusively domestic agencies like FEMA that are in all-hands-on-deck mode right now. At the CDC, where Talley works for a branch that focuses on overseas emergencies, "we have staff around the world responding."

Similarly, USAID, the agency that delivers U.S. assistance to poor countries, has deployed six separate disaster response teams — which can consist of as many as several dozen staffers — including teams to help displaced people from Syria and Iraq.

"This is only the second time that we've had six teams mobilized at once," notes Alex Mahoney, a top official with the agency's Office of U.S. Foreign Disaster Assistance, or OFDA.

The last time was during the Ebola outbreak in West Africa. "So yes, it's unusual," he says.

Both Talley and Mahoney say their respective agencies are equipped to handle this multipronged challenge. USAID's OFDA in particular undertook a major rethink of its staffing expectations in the wake of the Ebola crisis. Jeremy Konyndyk, who headed the office at the time, says the staffing demands of Ebola combined with several other disasters at the time, including the earthquake in Nepal and the Syrian refugee crises, "stretched OFDA to the breaking point."

"We didn't drop the ball on it, but it really took everything we had," says Konyndyk, who is now a senior policy fellow at the Center for Global Development. "We pushed our staff farther and for longer than was sustainable."

And in the aftermath, he and other officials concluded that this was unlikely to be a one-time occurrence. "It was very clear that we had to re-examine our assumptions about the levels of deployment that OFDA should be equipped to carry out." He's confident that the subsequent retooling of staffing arrangements with both full-time personnel and contractors has left OFDA prepared for the current wave of crises.

But Paul Spiegel, who directs the Center for Humanitarian Health at the Johns Hopkins' Bloomberg School of Public Health, is less optimistic about both the capacity and the commitment of the U.S. government. "There was already insufficient humanitarian workers to respond given the amount of emergencies," he says.

And he believes the funds for emergencies are also insufficient. For several years now the total amount donated by governments — including the U.S. — for international humanitarian assistance has fallen significantly short of what the United Nations said was needed. Last year the shortfall was 40 percent. President Trump's proposed budget for fiscal year 2018 would slash U.S. overseas disaster assistance by a third.

Congress has seemed on track to restore those cuts — there's been longstanding bipartisan support for this kind of aid.

"But these are not normal political times," says Spiegel. And as the cost mounts for rebuilding on U.S. soil, he worries that consensus for helping out overseas could be one more casualty of this hurricane season.

As for World Vision's Drew Clark, he says the donor fatigue that's hampered his organization's fundraising for victims of Hurricane Irma has already had serious consequences, forcing the group to drawn on its reserves to provide basic relief supplies like blankets, tents and cooking materials.

"But there is simply a ceiling to how much money we can divert that way," he says. And doing the kind of core work World Vision would normally undertake — for instance rebuilding the water supply and supporting the health sector — is out of the question without a rapid influx of additional funds. If those needs go unaddressed in Puerto Rico, "what will be happening over the next few months could be a really frightening situation."