Accessibility links
New Book Argues That Hunter-Gatherers May Be Happier Than Wealthy Westerners : Goats and Soda Anthropologist James Suzman has lived with one of the last groups of hunter-gatherers. And it's made him rethink his perspective on the Western lifestyle.

Are Hunter-Gatherers The Happiest Humans To Inhabit Earth?

Are Hunter-Gatherers The Happiest Humans To Inhabit Earth? 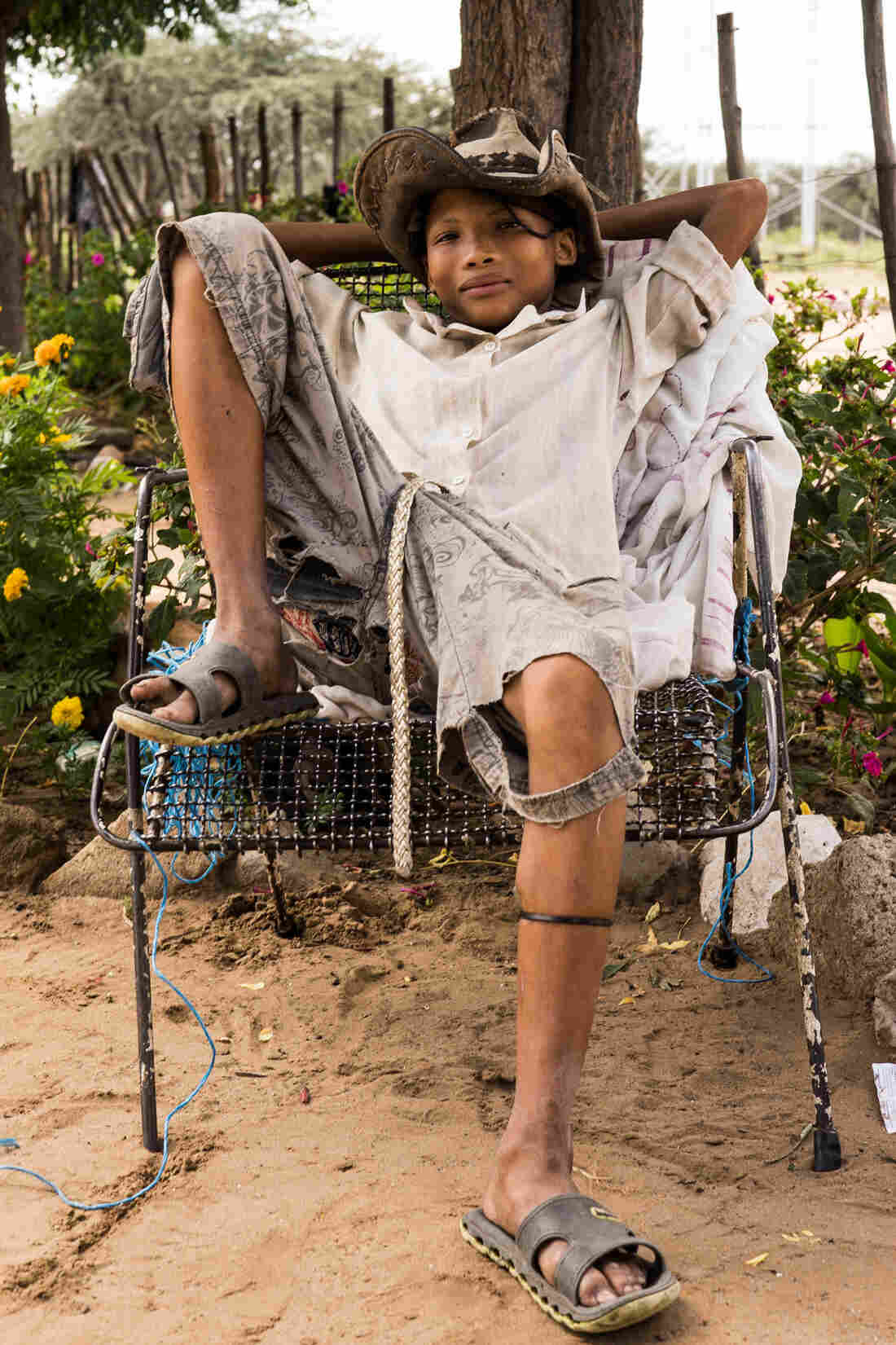 A relaxed moment for a child in the Khoisan hunter-gatherer society. James Suzman hide caption 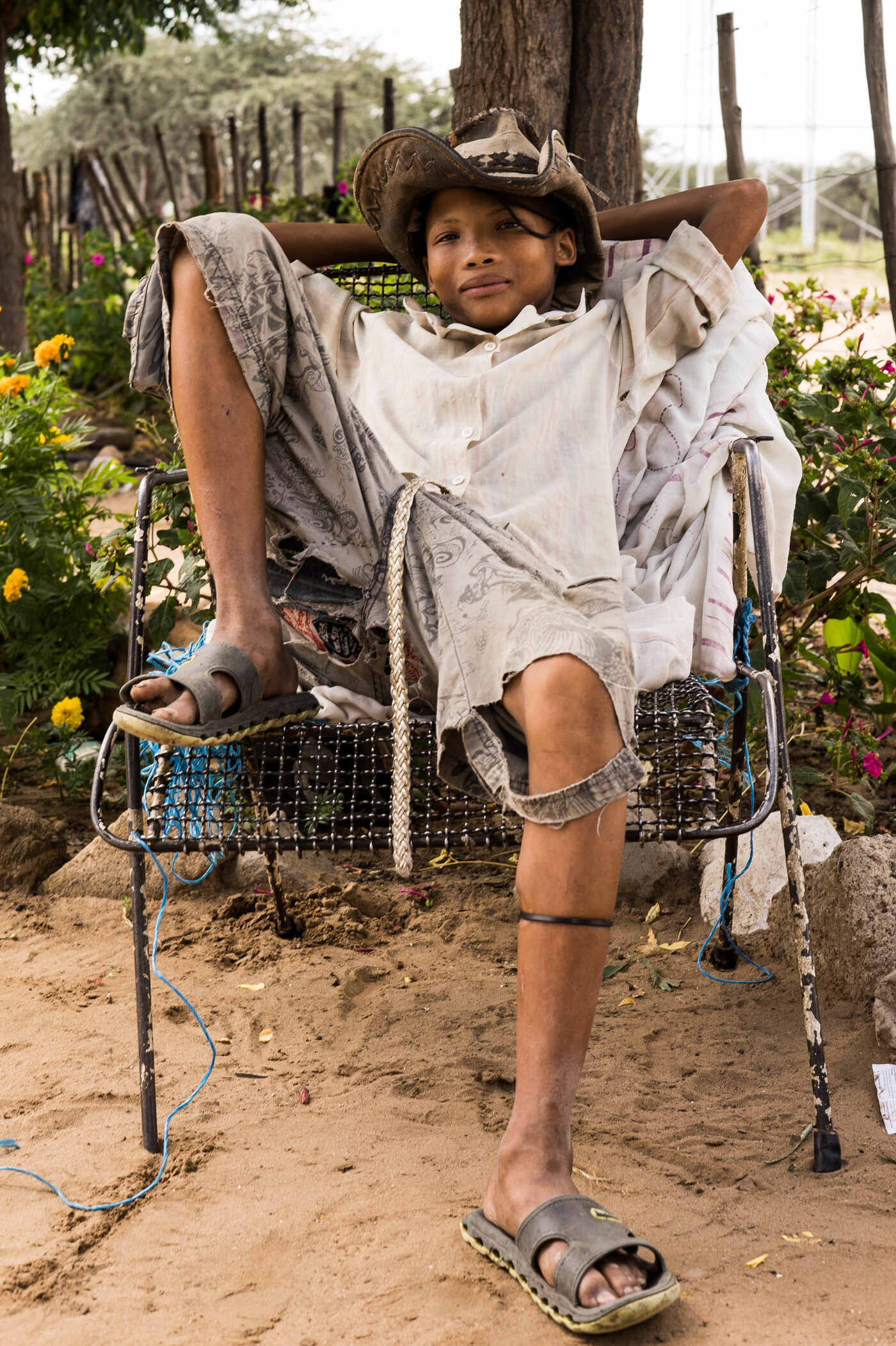 A relaxed moment for a child in the Khoisan hunter-gatherer society.

There's an idea percolating up from the anthropology world that may make you rethink what makes you happy.

The idea is not new. It surfaced in the popular consciousness back in the late 1960s and helped to galvanize a growing environmental movement.

And now several books are bringing it back into the limelight.

The idea is simple: Perhaps the American and European way of living isn't the pinnacle of human existence. Humanity hasn't been marching — in a linear fashion — toward some promised land. Perhaps, Western society isn't some magical state in which technology free us from the shackles of acquiring basic needs and allows us to maximize leisure and pleasure.

Instead, maybe, modernization has done just the opposite. Maybe the most leisurely days of humanity are behind us — way, way behind us.

"Did our hunter-gatherers have it better off?" James Lancester asks in a recent issue of The New Yorker.

"We're flattering ourselves by believing that their existence was so grim and that our modern, civilized one is, by comparison, so great," Lancester writes. 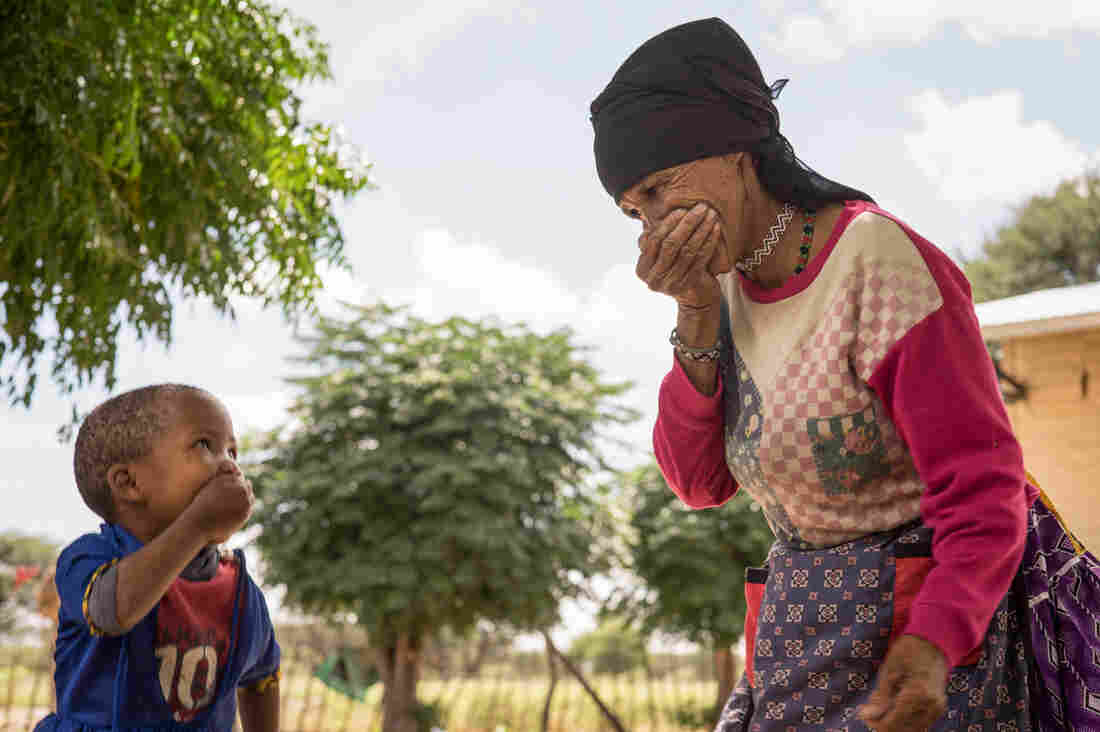 A grandmother and granddaughter in Namibia share a joke. They are members of the Khoisan group. James Suzman hide caption

This idea surfaces, over and over again, in the fascinating new book by anthropologist James Suzman, called Affluence Without Abundance.

Suzman has spent the past 25 years visiting, living with and learning from one of the last groups of hunter-gatherers left on Earth — the Khoisan or Bushmen in the Kalahari Desert of Namibia.

A study back in the 1960s found the Bushmen have figured out a way to work only about 15 hours each week acquiring food and then another 15 to 20 hours on domestic chores. The rest of the time they could relax and focus on family, friends and hobbies.

What we think of as "modern humans" have likely been on Earth for about 200,000 years. And for about 90 percent of that time we didn't have stashes of grains in the cupboard or ready-to-slaughter meat grazing outside our windows. Instead, we fed ourselves using our own two feet: by hunting wild animals and gathering fruits and tubers.

As people have diverged so widely from that hunter-gatherer lifestyle, maybe we've left behind elements of life that inherently made us happy. Maybe the culture of "developed" countries, as we so often say at Goats and Soda, has left holes in our psyche.

Suzman's experiences make him uniquely qualified to address such philosophical questions and offer suggestions on how to fill in the gap. So we spoke to him about his new book.

What do you think of this idea that the hunter-gatherer way of living makes people the happiest they can be? Is there anything that suggests this to be the case?

Look, the Bushman's society wasn't a Garden of Eden. In their lives, there are tragedies and tough times. People would occasionally fight after drinking.

But people didn't continuously hold themselves hostage to the idea that the grass is somehow greener on the other side — that if I do X and Y, then my life will be measurably improved.

So their affluence was really based on having a few needs that were simply met. Just fundamentally they have few wants — just basic needs that were easily met. They were skilled hunters. They could identify a hundred different plants species and knew exactly which parts to use and which parts to avoid. And if your wants are limited, then it's just very easy to meet them.

By contrast, the mantra of modern economics is that of limited scarcity: that we have infinite wants and limited means. And then we work and we do stuff to try and bridge the gap.

In fact, I don't even think the Bushman have thought that much about happiness. I don't think they have words equivalent to "happiness" like we think of. For us, happiness has become sort of aspirational.

Bushmen have words for their current feelings, like joy or sadness. But not this word for this idea of "being happy" long term, like if I do something, then I'll be "happy" with my life long term.

The Bushmen have a very different sense of time than we do in Western culture. In the book, you say we think of time as linear and in constant change, while they think of it as cyclical and predictable. Do you think that makes them happier?

This is one of the big, big differences between us and hunter-gatherer cultures. And I'm amazed that actually more anthropologists haven't written about it.

Everything in our lives is kind of future-oriented. For example, we might get a college degree so we can get a job, so that we can get a pension. For farmers it was the same way. They planted seeds for the harvest and to store.

But for hunter-gatherers, everything was present-oriented. All their effort was focused on meeting an immediate need.

They were absolutely confident that they would be able to get food from their environment when they needed it. So they didn't waste time storing or growing food. This lifestyle created a very different perspective on time.

People never wasted time imagining different futures for themselves or indeed for anybody else.

Everything we do now is rooted in this constant and enduring change, or our history. We look at ourselves as being part of our history, or this trajectory through time.

The hunter-gatherers just didn't bother locating themselves in history because stuff around them was pretty much always the same. It was unchanging.

Yes, there might be different trees sprouting up year after year. Or things in the environment change from season to season. But there was a systemic continuity to everything.

I think that it's a wonderful, extraordinary thing. I think it's something we can never get back — this different way of thinking about something as fundamental as time.

It manifests in very small ways. For example, I would ask them what their great grandfather's name was and some people would just say, "I don't know." They just simply didn't care. Everything was so present-focused.

Today people [in Western societies] go to mindfulness classes, yoga classes and clubs dancing, just so for a moment they can live in the present. The Bushmen live that way all the time!

And the sad thing is, the minute you're doing it consciously, the minute it ceases to be.

It's like making the perfect tennis shot. You can know all the theory in the world about how to play tennis. But to make the perfect shot, it's a profoundly physical thing. It's subconscious.

So the Bushmen held the secret to mindfulness and living in moment. Is that key to their happiness?

There is this supreme joy we get in those moments, you know, when time sort of disappears.

I felt that way when I was younger, and I used to go clubbing and dancing. Time disappeared. There was no earlier that day and no tomorrow.

So is there a way people can get this hunter-gatherer sense of time back? To live in the moment subconsciously?

I think there are some things in modern life that can fill in the gap left by not connecting with nature the way hunter-gatherers did.

I think sports can help fill this void or going on long hikes. You can also lose sense of time by doing activities which give you a great sense of purposed fullness and satisfaction, such as crafts, painting and writing.

After spending so much time with the Bushmen, does Western society just seem crazy?

Ha, ha. When I was younger, I was angry about "us," you know about the way people in our society behave.

So over time, the experiences have really humanized everybody. I've come to realize that all types of people — and their cultures — are just as clever and just as stupid.

A previous version of this story incorrectly gave the title of James Suzman's book as Abundance Without Affluence. The correct title is Affluence Without Abundance.