Accessibility links
Boko Haram Survivor Protects Children By Pretending To Be Mad : Goats and Soda Zainabu Hamayaji went to extraordinary lengths to protect her 10 children from being abducted by Boko Haram. 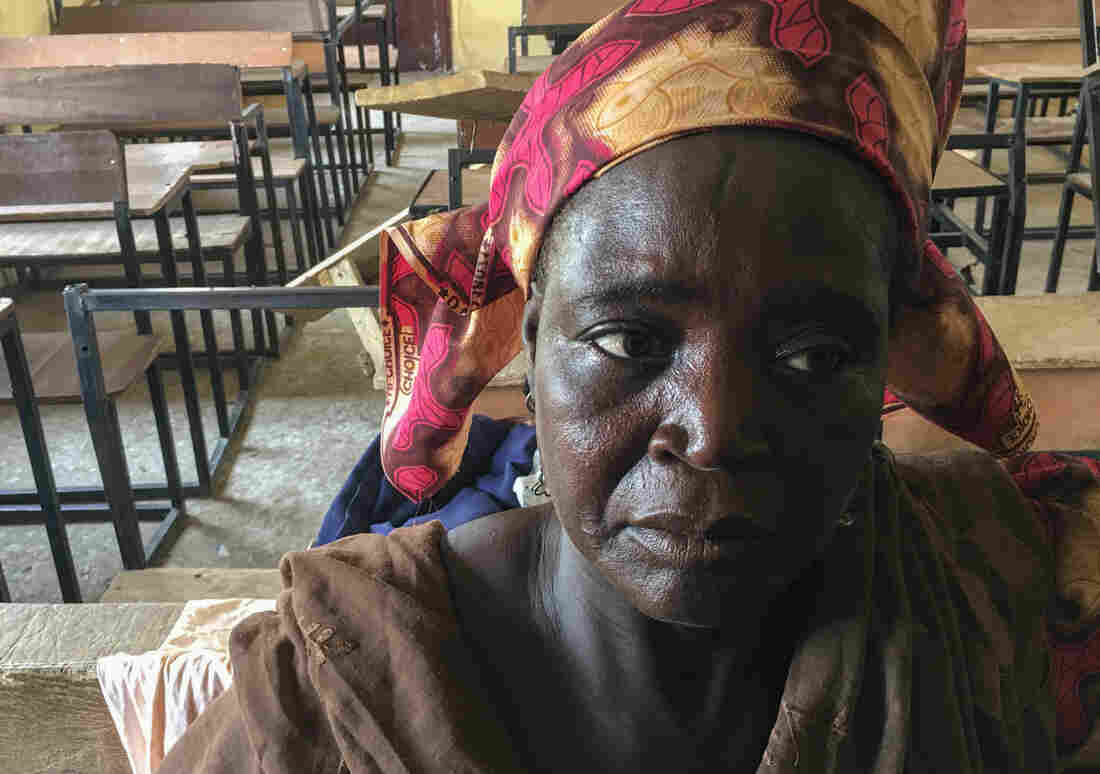 Zainabu Hamayaji went to extreme lengths to protect her family from being abducted by Boko Haram. Ofeibea Quist-Arcton/NPR hide caption 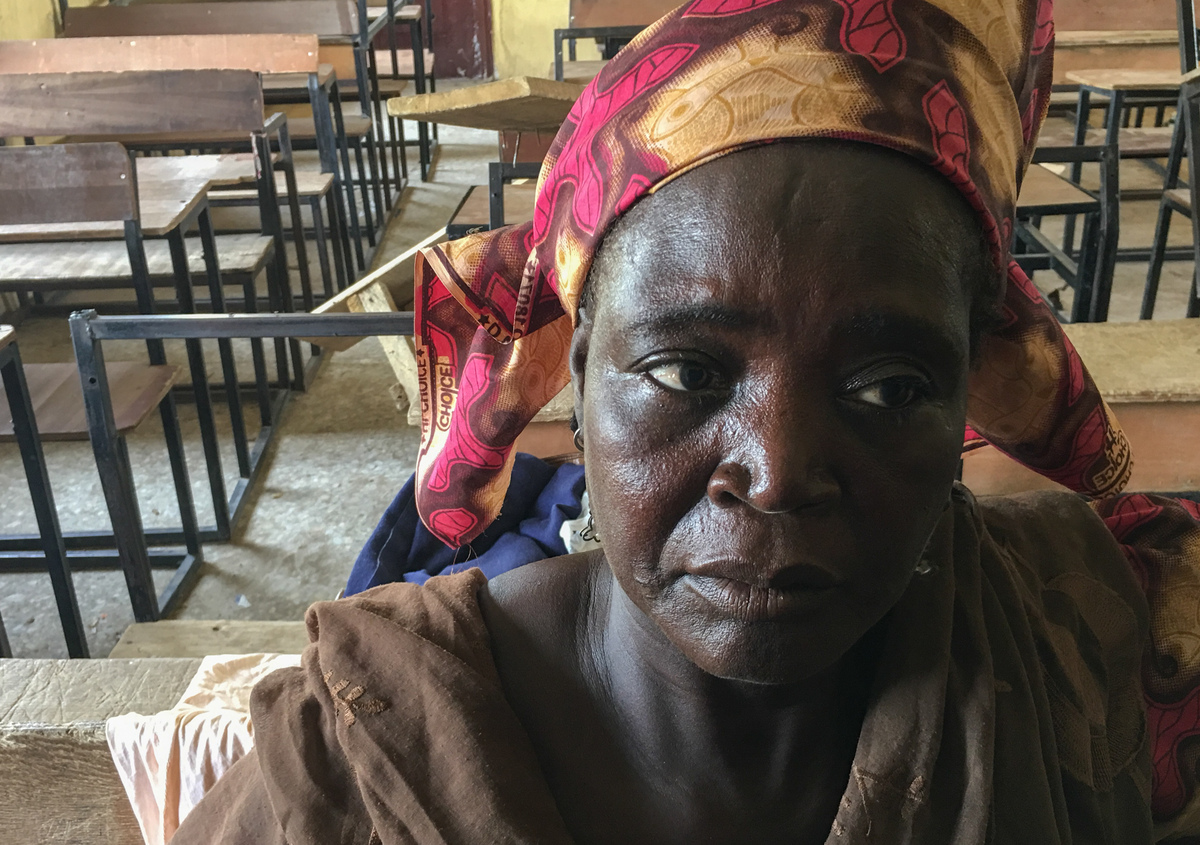 Zainabu Hamayaji went to extreme lengths to protect her family from being abducted by Boko Haram.

Ingenuity, inspiration, an elaborate ruse and a touch of madness. That is what it took for Zainabu Hamayaji to protect her family from Boko Haram.

The terror network in northeastern Nigeria has killed 20,000 people, abducted thousands more and driven more than 2 million people from their homes during its eight-year insurgency. The 47-year-old mother of 10 — four biological and six orphaned children ranging from age 5 to 15 — had to feign insanity to keep the insurgents away.

The Little Boy Who Escaped From Boko Haram

Her priority, during a hellish period under Boko Haram occupation, was to hide her 11-year-old daughter, Hassana Isa, because she had heard fighters were in town looking for girls to marry.

"I was told Boko Haram was approaching and looking for young girls," she says. "Someone had tipped them off that I had a daughter of marriageable age, but I swore to myself that I would never allow them to wed or abduct my daughter."

Quick thinking was the only way to outwit the insurgents, who overran the town of Madagali in Adamawa state in the troubled northeast, says Hamayaji. She was living there with her family in 2014 when Boko Haram extremists swung into town and took over.

"The fighters were killing people who tried to escape," says Hamayaji. "They killed my husband and many other men," so she had no choice but to remain in Madagali.

Boko Haram soon seized control of swaths of territory in the area. "I saw them killing so many people," says Hamayaji, "because they tried to get away."

Hamayaji went to extreme lengths to safeguard her young daughter Hassana. She dug a deep ditch at the back of her compound. And there her daughter remained for the next nine months.

"I put her inside with 100 jerrycans of water, sacks of food supplies and leather bags so that she could relieve herself, using the latter as a toilet. She cooked in that ditch and did everything there. And she had the Holy Quran so she could pray. Of course, she was frightened," says Hamayaji of her daughter, who is now nearly 15, "but I told her she had to stay there."

She placed a corrugated iron sheet above the deep hole. But Boko Haram kept asking where her daughter was. "I swore to those fighters that I had no daughter, but they wouldn't believe me and they kept beating me up — and looking for her."

Hamayaji shows us a scar on her forehead and a missing front tooth and says she still has a dislocated shoulder from the repeated beatings. "They assaulted me and terrorized my family," she tells us.

Boko Haram shot into the global headlines in April 2014 after they abducted 276 schoolgirls from their dorms in Chibok in the northeast. Thousands more girls, women and boys have also been abducted — before and since the Chibok girls.

At the time, Boko Haram's leader bragged that the schoolgirls would be converted to Islam and forced to marry his fighters. Sexual abuse, rape and forced marriages were rampant, with young women who've regained their freedom sharing their stories of sex exploitation, rape and physical abuse.

Some have chosen to remain with their "husbands" in the bush, refusing to leave Boko Haram captivity. A few have openly abandoned freedom and returned to live with the insurgents. Using girls as young as 10 and young women as suicide bombers is a hallmark of Boko Haram's campaign of violence.

But it wasn't just Hamayaji's eldest daughter, Hassana, she had to protect. She also had to find a way to stop the insurgents who had occupied Madagali from harassing her family. That was when she hatched the plan to pretend she was mad, she says.

How To Succeed In Business After Fleeing For Your Life

As if on stage, Hamayaji shifts back into character and re-enacts the role, with a wild look in her eyes. It's how she behaved during the months she was jeered at and shunned for being the "crazy woman."

"I decided to strip off all my clothes and march around town naked, to look like a madwoman," she says. "I unbraided my hair and smeared urine and feces in my hair and on my body. There were flies hovering everywhere around me. And I would roll around in trash heaps so that Boko Haram would think I was mentally unstable."

Hamayaji says the fighters returned again and again to her home, asking her children, "Is your mother all right? She seemed fine when we came by here earlier." Her kids played along and kept telling the insurgents she had been mentally unstable for a long while and frequently had to go to the psychiatric hospital before Boko Haram captured the town. Initially skeptical, the militants fell for her ploy, says Hamayaji.

The terror group decided they didn't want the daughter of a madwoman. Hamayaji says that earlier they had killed one madwoman, and the fighters believed that act had cursed them, robbing them of military success. "So they didn't want to kill another madwoman and considered it bad luck to kill someone who was crazy. That's how we were spared," she says. "They scrawled on a wall that nobody should touch me or my children or they would be cursed. That's how we were protected."

"I went to those lengths to protect my family and to save my daughter from being abducted and married off to a Boko Haram fighter," says Hamayaji.

She had succeeded, but it took many difficult months until the family was eventually rescued by the military that drove Boko Haram out of Madagali.

Then suspicion fell on her. The soldiers asked Hamayaji whether she married a Boko Haram commander. "When the soldiers met me, they said 'Are you a Boko Haram wife?' I insisted I was not," she says. Then they asked her how she had managed to stay safe without collaborating with the insurgents while they controlled the town?

She explained her ruse — behaving like a madwoman and hiding her daughter in a ditch for almost a year.

It was only when she led them to the ditch that the military believed Hamayaji, she says. "We went there together. When we opened up the hole, there she was, where I'd left her nine months earlier and then Hassana came out."

I ask whether she felt like a heroine for protecting her family. Hamayaji said no. She said she didn't know of other women who had taken such extreme steps to shield their children from Boko Haram. "None at all."

I inquired insistently, "No other women acted like you?"

In an unexpected, yet matter-of-fact reply, Hamayaji responded, "There were not many women who sacrificed like that. Other women gave away their children for selfish reasons. Some gave away their daughters. Others were forced to hand out a daughter here and there, because they didn't have any food and they had to eat. They'd get provisions in exchange." 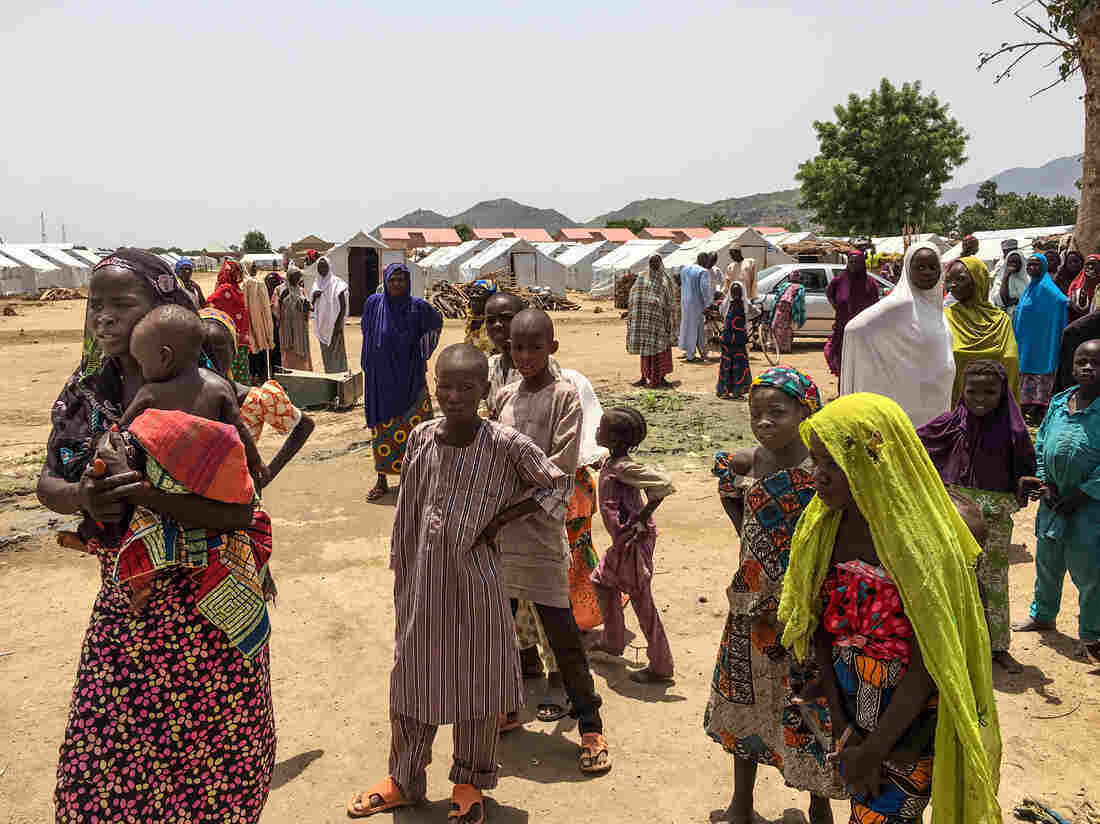 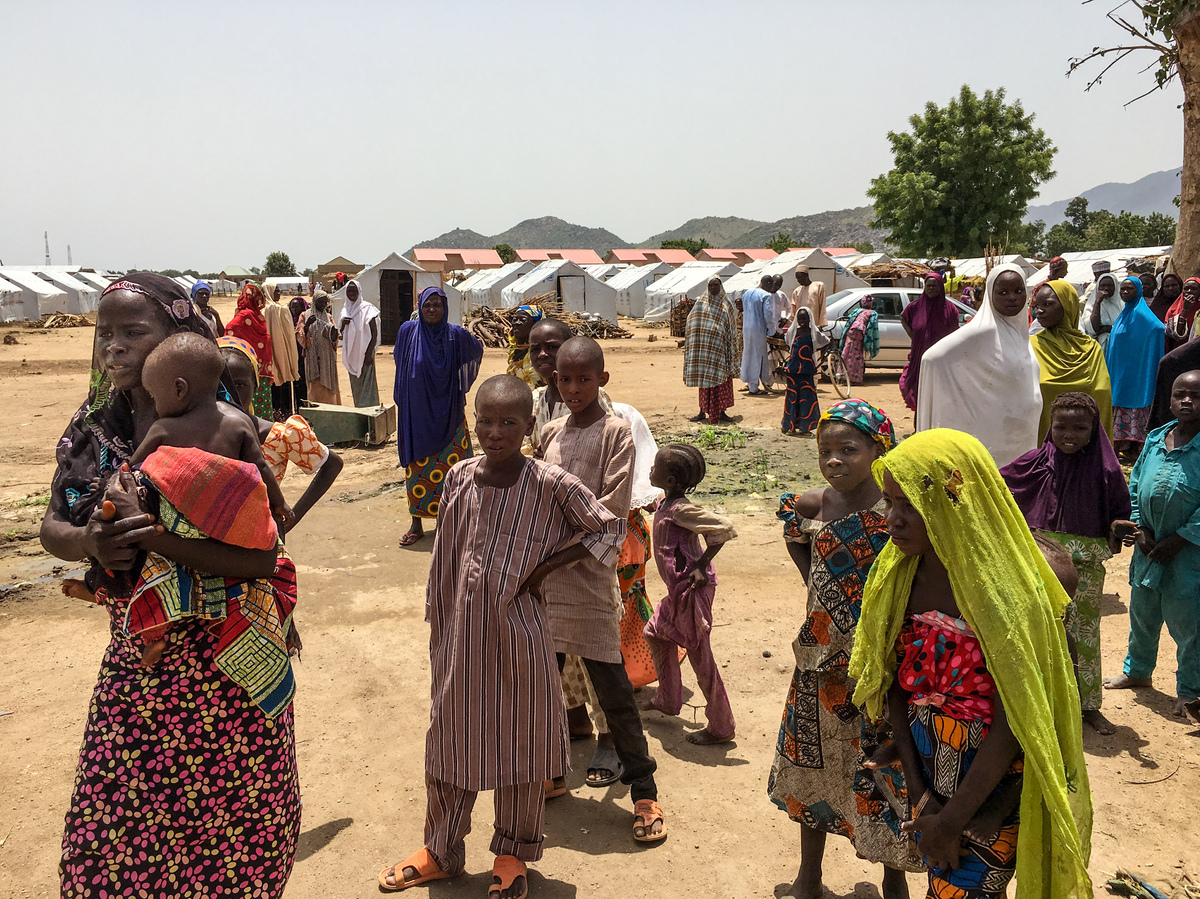 Hamayaji, her children and many other displaced persons now live in Twenty Houses, a camp in Gwoza, northeast Nigeria.

Boko Haram was also handing out money at the time — the equivalent of about $350 to $700, she said. She added that sometimes the fighters would give mothers land in the areas they had seized as a payment or "dowry" for their daughters. "The women would be so elated," she remembers. "They'd collect both the money and the properties."

Hamayaji has left Madagali to return to her hometown, Gwoza, 15 miles away across the border in Borno state. Pain and other emotions play on her face as she shares her ordeal with NPR. Thrusting her arms forward as she speaks, her eyes dart around a disused classroom. It has a giant blackboard with a huge bullet hole bang in the middle. Peer through it and you witness life outside at Twenty Houses, a camp for displaced persons where Hamayaji, her children and many others now live in Gwoza.

What It's Like To Come Home After Fleeing From Boko Haram

Chairs and desks are in a jumbled stack behind her. Most children are not in school. Gwoza was the headquarters of Boko Haram's short-lived caliphate until the extremists were swept out of the town by the Nigerian army in 2015.

"Liberated Gwoza is peaceful under the military and secure," says Hamayaji. "What I want now is for my children, including Hassana, to go to school and get an education so they have a future."

But she has no money and has to beg to feed her family. She is appealing to relief workers to "please help."

Despite the army's presence, potential insecurity lurks just a few miles away from the lush Mandara mountains of Gwoza. In the Sambisa Forest, Boko Haram's stronghold has held many people captive, with other abducted people still believed to be held in the group's hideout.