Accessibility links
Conjoined Twins From East Africa Came To The U.S. For Surgery : Goats and Soda In their home country, they could not get medical care because of the stigma surrounding their condition. Then came the chance to come to the U.S. for treatment. 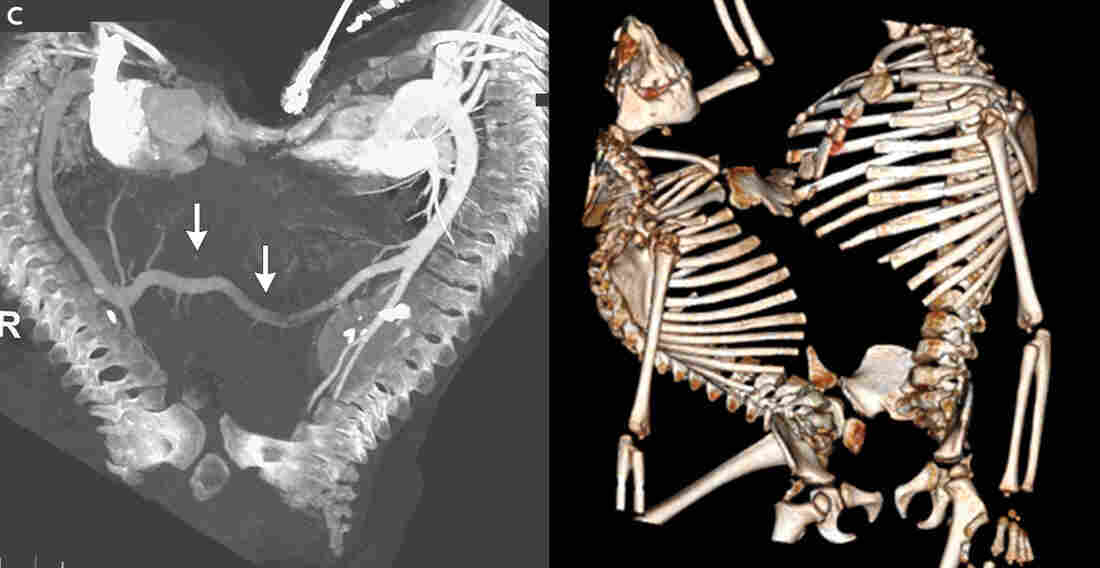 The CT scan (left) shows the twins before the surgical separation. At right; a three-dimensional reconstruction of the CT scan was used to help doctors prepare for the procedure. The New England Journal of Medicine ©2017 hide caption 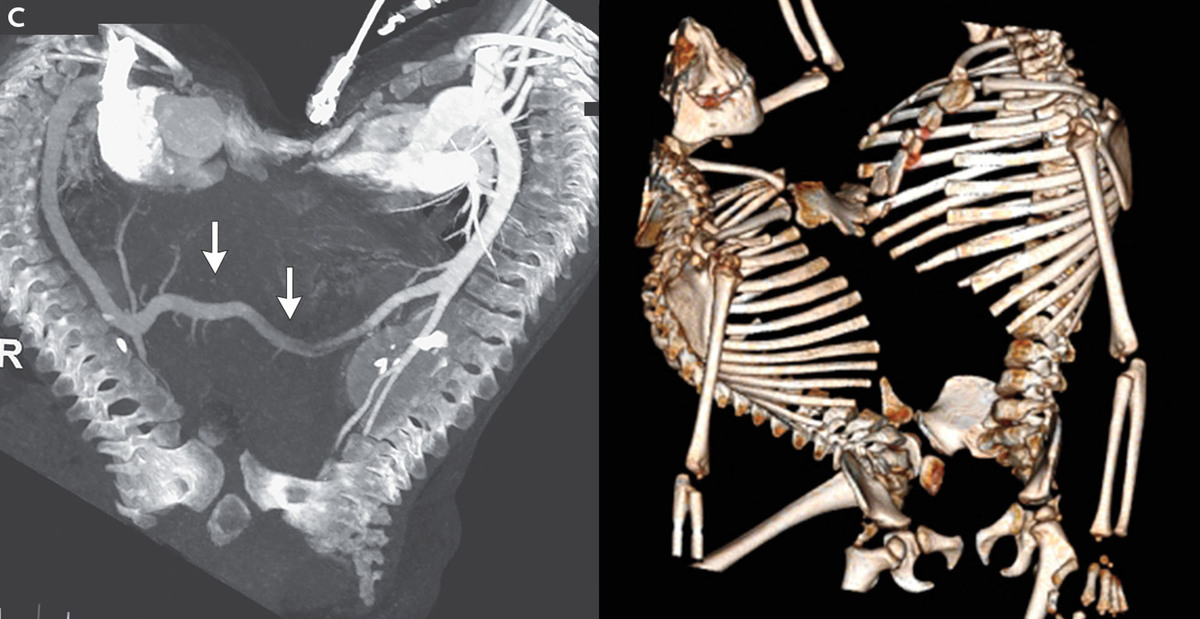 The CT scan (left) shows the twins before the surgical separation. At right; a three-dimensional reconstruction of the CT scan was used to help doctors prepare for the procedure.

The New England Journal of Medicine ©2017

In the East African country where they were born, the conjoined twin girls would likely both have died.

But even in the wealthiest of nations, it's not easy to make decisions about how to treat conjoined twins. If surgery is warranted, it is a long and difficult procedure.

And there are ethical considerations that transcend culture.

Dr. Allan Goldstein, who eventually led a team to separate the girls as chief surgeon at MassGeneral Hospital for Children, sums it up: "So we could say, if we do nothing both will die. If we do something Twin B will survive. That might sound like a simple decision. You have the opportunity to save one instead of losing both. But the truth is that they were two children. It wasn't one child. How do you look at Twin A and say we're going to save your sister?"

The case study of the East African twins was published in this week's issue of The New England Journal of Medicine.

For the parents of the twins, it was difficult to seek medical treatment and even to go outside with the children because of the stigma surrounding conjoined twins in their home country.

A nonprofit organization connected the family with the hospital. To preserve the family's anonymity, the names of the nonprofit and the country where the family lives are not being released.

In mid-2016, the 22-month-old twin girls, who were conjoined at the abdomen and pelvis, came to the U.S. for medical care.

Doctors determined that Twin A, as the paper calls her, suffered from congenital heart disease. Doctors believed she would die with or without the separation surgery. And they further believed that if the twins were not separated and Twin A were to die, Twin B would die soon after because of shared blood circulation.

Surgery to separate conjoined twins is not often done. Conjoined twins are rare, 1 in every 200,000 births. When a fertilized egg separates, the result is identical twins. But if the fertilized egg fails to fully separate, then it develops into a conjoined fetus. Sometimes without separation, conjoined twins can live long lives, like the famous American pair of Thai heritage, Chang and Eng Bunker, who both lived to be 63 years old. But an outcome like that seemed highly unlikely in this case.

Ultimately the choice between letting both children die or operating for the chance of the survival of one "is heavily influenced by culture and values," the paper says.

Goldstein recounts the family's thought process: "They said it was a difficult decision. That no parent would want to lose either child or certainly not both children but that they thought it was the right thing to do for their girls." In the end, Twin A died and Twin B survived.

The outcome of the case is a reminder of the limits of modern medicine in even the wealthiest of countries.

Goldstein says that Twin B, now 3 years old, needs surgery for a deformed leg as well as physical therapy but overall is doing well, "She looks great," he says. "She's always happy, smiling."

And the family is happy with the care it has received.

"Our situation in Africa was very unpleasant," the family said in a question-and-answer session after the surgery. "Here, we've been treated very well, and we've had a very good experience overall. The most difficult part was the uncertainty about the outcome of surgical separation. ... Everyone here was united for our family's cause. We couldn't be prouder or happier of how we all came together for the well-being of our child."