Accessibility links
Miss Peru Beauty Pageant Makes Headlines By Sharing Stats On Gender Violence : Goats and Soda October saw several high-profile cases of violence against women in Peru. So the beauty pageant decided it was time to speak up. How did Peru react? 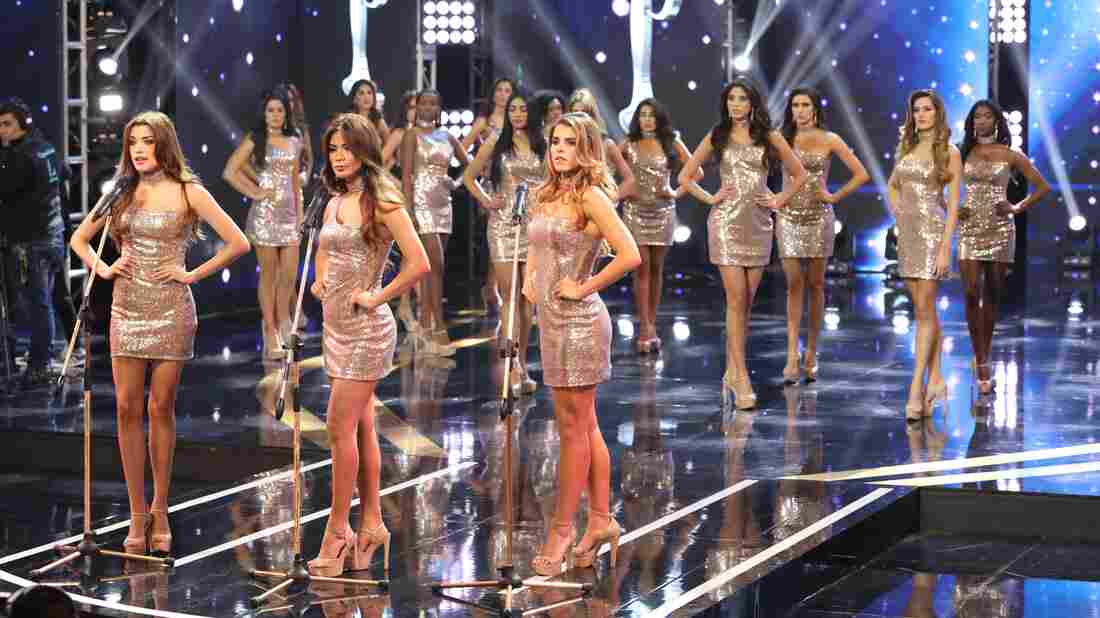 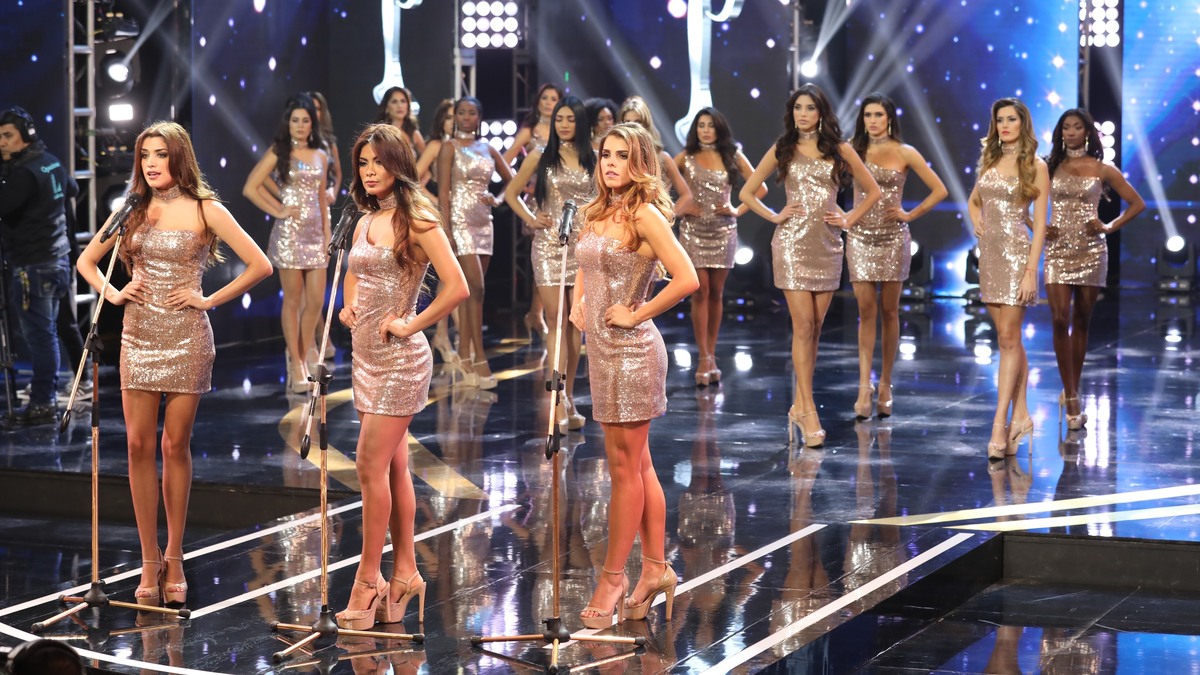 Clad in shimmering minidresses, the 23 contestants in this year's Miss Peru pageant each stated a fact about gender violence.

Viewers of the Miss Peru pageant on Sunday were startled when the 23 contestants strutted onstage in sequined gold minidresses, introduced themselves, said "My measurements are..." and then stated facts such as these: More than 70 percent of all women suffer street harassment; 13,000 girls are victims of sexual abuse in Peru; more than 25 percent of Peruvian girls and teenagers are abused in their schools.

A Reason To Respect The Miss World Pageant

Pageants typically give out a different sort of statistic — about the measurements of the contestants. And, so, a hashtag was born: #MisMedidasSon (My measurements are) ...

"We definitely had wanted a different Miss Peru," explains Luciana Olivares, content and strategy manager of Frecuencia Latina, the TV network that broadcast the competition, where the Peruvian representative to Miss Universe is chosen. "But it was only during the last weeks where it became obvious that we needed a cry against violence on women."

On the prior Sunday, a volunteer working for the national census reported that she was raped while conducting the poll at the home of a man; he is now in police custody, charged with the crime.

Social media exploded with #PeruPaísDeVioladores — Peru, country of rapists, Controversy erupted over the hashtag. Prime Minister Mercedes Araoz, who last year revealed she had been in an abusive relationship, said she was upset about the way the country was portrayed on social media: "Peru is more than that."

The alleged rape was one of several flashpoints for gender issues in October. Lima ranked fifth in a list of the most dangerous megacities for women in a newly released poll by the Thomson Reuters Foundation. In mid-October the president of the Commission on Women and Family in Congress was forced out of her seat after saying that victims of femicide "sometimes unwittingly" bring the deadly aggressions upon themselves. And on the night of Oct. 8, a cellphone video aired on the nightly news, showing a young woman being dragged by her boyfriend on a sidewalk of the residential neighborhood of Miraflores. An arrest was made. The same weekend Peruvians had also learned that a popular TV journalist had filed a police report on domestic violence against her former partner, a well-known economist and columnist.

A traditional beauty pageant would have been particularly dissonant in this climate, says Olivares: "This contest could not be about casting pretty faces." The Frecuencia Latina television network came up with the idea of having the contestants "shout out" the statistics (provided by the Ministry of Women and Vulnerable Populations). The idea was endorsed and carried out by the pageant, which is led by former beauty queen Jessica Newton and Secuoya Productions, the company that produces the TV show.

Says Olivares: "We decided that we had the opportunity to turn the pageant around and use it as a platform to mobilize, raise awareness and speak up. We knew the whole country would be watching."

Peruvians did react and soon #MisMedidasSon was trending around the world. "The impact was huge," says Olivares. "Social media went crazy and instead of debating which contestant was the most beautiful, the topic was violence. We shifted the conversation."

Farid Kahatt, a political analyst and professor at the Universidad Católica, liked the idea — and the world coverage it drew: "Peru is scarcely mentioned in international media. When the country does get coverage it is usually due to political events like a presidential election," he wrote online. He thought the "predatory sexual behavior" in Hollywood helped bring attention to the pageant cavalcade of facts. And he was glad to see that the issue of gender violence got domestic attention as well — that's unusual in Peru, he says.

But the enthusiasm has not been unanimous. "I have truly mixed feelings about this," says Regina Limo, a feminist columnist at the popular site utero.pe. She thought it was a positive step to offer up the statistics on national TV but was conflicted over the pageant, which she says is usually a "superficial" event that reinforces unrealistic social expectations that burden women.

Speaking of the many women who die in gender-based violence, Limo adds, "They are saying 'Hey, there are thousands of dead women' but these women didn't die by themselves." She believes that the conversation must focus on who killed them and why they died, not just on statistics.

There was also criticism of violence and misogyny on programs that air on the TV channel that broadcast the pageant. Olivares, a former banking executive who has published four books about marketing, says: "Latina is in the process of reviewing and improving all of our content. Trust me when I say we have made great strides in some aspects. But change does not happen overnight."

Limo, who is also a screenwriter for soap operas, points out that "gender violence, like all social problems, is rooted in social standards. You won't stop it if you don't attack the causes. The pageant reinforces the constraints that weigh women down," she says, referring to emphasis on sexuality, femininity and physical beauty.

Despite her criticisms, Limo thinks this momentum can be used by feminist organizations to raise awareness. She reflects: "You could argue there is no bad publicity" when it comes to bringing the issues of violence against women to the public eye.

Luciana Olivares, the channel executive, says the real measure of success will not be in publicity but in "stricter laws and a population that is more engaged in the struggle."

On Wednesday, the conversation even engaged the highest office in the country. First lady Nancy Lange tweeted a video of the segment: "Violence against women has to stop. Thank you Miss Peru for being part of a struggle that belongs to us all."

Elda L. Cantú is a freelance reporter and a professor of international politics at ESAN University. She writes and reports for Radio Ambulante and the New York Times en Español. She hails from the U.S.-Mexico border and currently lives in Lima, Perú.