Accessibility links
India Leads The World In Deaths From Tuberculosis : Goats and Soda TB is the world's deadliest infectious disease. And India has more deaths each year than any other country. 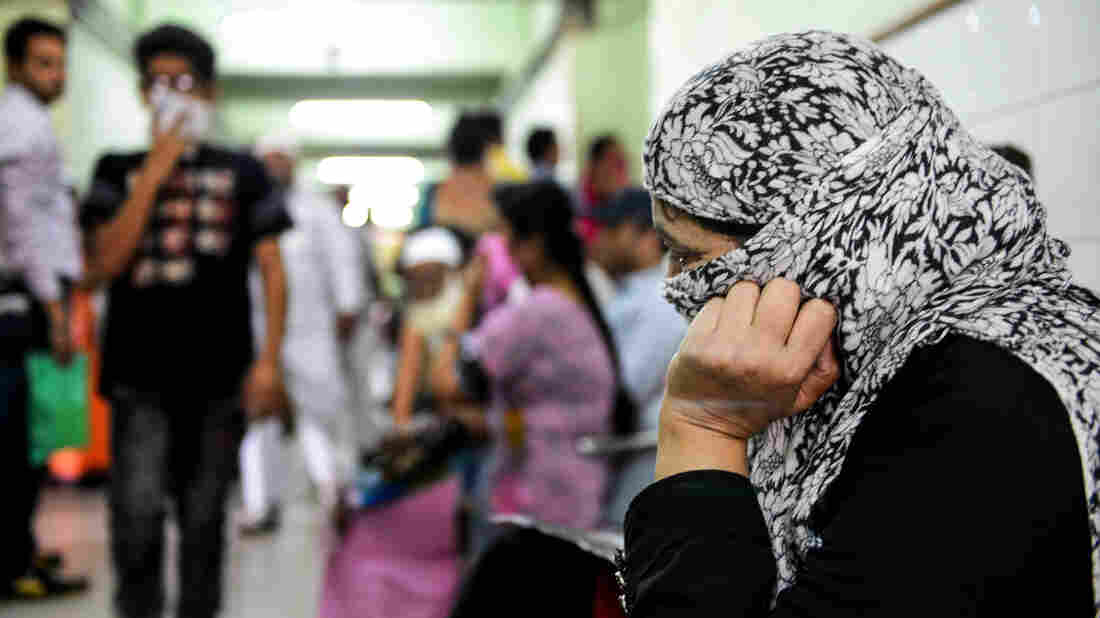 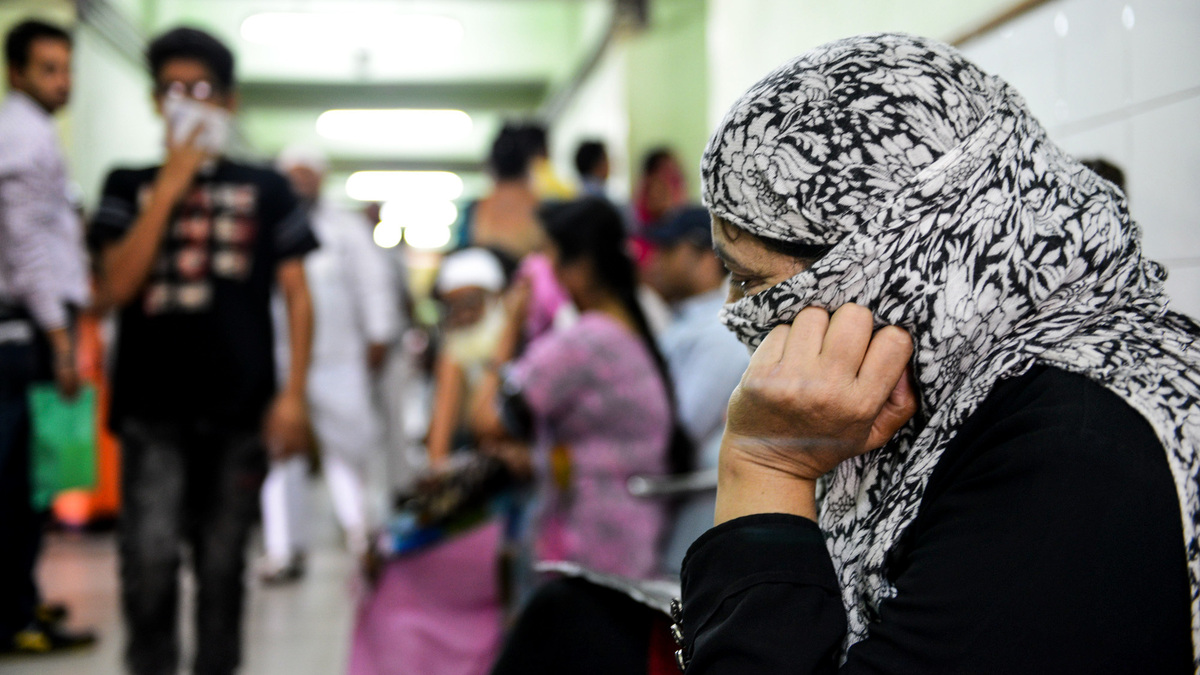 Tuberculosis patients in a hospital in New Delhi.

For the second year in a row, India has landed the dubious distinction of being number one in the world for deaths from tuberculosis: 423,000 TB patients died in the year 2016. That's a third of the world's 1.4 million death toll.

India, of course, is not the only country where TB is a bane. In the 20th annual edition of the World Health Organization's global tuberculosis report, India's high volume of TB deaths is followed closely by Indonesia, China, the Philippines and Pakistan.

There is good news in the report. Globally, the rates of TB actually dropped in 2016. Even in India, there was a 12 percent drop in the number of deaths from TB compared with last year.

But the number of fresh TB cases in India only dropped three percent. In a population of 1.324 billion people, that translated to 2.7 million new cases in 2016.

Why is India bearing the brunt of these infections? And will the government be able to meet its goal of eliminating tuberculosis by 2025?

"A high mortality tells us several things. One is that there is a delay in diagnosis. And that people who get diagnosed aren't given adequate treatment," says Dr. Jennifer Furin, a lecturer at the Harvard Medical School in the Department of Global Health and Social Medicine.

Part of the reason for the delay in diagnosis is the lack of the latest equipment. In most parts of India TB is diagnosed from two sputum smears taken at different times of the day that are analyzed by a health worker using a microscope. That's a slow process, and there's a large margin for error.

In parts of Africa and Europe, machines have been introduced that can diagnose the samples accurately and quickly. But in India, reports indicate that fewer than 800 machines are available across the country.

Treatment is also less efficacious. In India, the regimen of antimicrobial drugs is often spread out over a longer period of time than in other countries, making it harder for patients to see signs of progress. So some people simply stop taking their medication.

About a third of the world's population is diagnosed with latent TB, which means they have been infected by the TB bacteria from actively sick people, who spread it by coughing or simply speaking. The bacterium has no symptoms in the latent stage and isn't strong enough to infect to others. But it won't go away unless it's treated with the same antimicrobial drugs used against active TB, taken over nine months.

In India, the percentage of people with latent TB is even higher: 40 percent. This is partly because the disease is being spread by people with active TB who aren't diagnosed or treated effectively.

And what happens if latent TB is not treated? One in 10 people will go on to develop active TB — a rate that is even higher when the immune system is weak.

In countries like India, where TB is rampant, the World Health Organization recommends treating only those who are actively sick.

But that directive is criticized by some TB specialists in India and in the global community. Furin says that if latent TB isn't targeted along with active TB, the country will never be able to bring down its numbers. "Concerted efforts in countries like Latvia and Estonia treated people with TB who were infected but not yet sick, which is something we know we have to do" to eliminate TB, she says.

There is also the problem of drug-resistant TB. New strains of TB have developed resistance to the standard medicines. These patients need longer treatment and also chemotherapy at times.

Indian clinics have access to newly developed drugs that successfully cured multi-drug resistant TB in other parts of the world, but only a handful dispense these medications, says Stephen Lewis, a former U.N. special envoy on HIV and AIDS in Africa who was in India last month on a fact-finding mission. Fewer than 800 people are using such drugs in India, he says.

Mumbai is India's epicenter of multi-drug resistant TB, representing 11.5 percent of the country's 147,000 cases. The success rate for curing MDR-TB, as it's called, is only 33 percent. "I would have thought that figure should ring the loudest alarm bell of all. it is unconscionable that this situation should continue," says Lewis.

The difference, Furin points out, is focus. South Africa and Eastern Europe both diagnose and treat new infections and drug-resistant TB quickly and their rates of infection and mortality have dropped. India, she says, has a lot of catching up to do.

Lewis says that funding is one of India's big challenges. According to multiple studies, the first line of defense against the spread of TB is raising awareness in communities, he says, and field officers are severely hampered by lack of money. Diagnoses and treatment, too, are hamstrung by small budgets, lack of personnel and labs with antiquated equipment in urban slums and rural areas.

India has practically doubled its governmental budget for TB from $280 million this year to $525 million next year. Based on WHO's estimates on how much India needs to spend to fight the disease, Lewis believes that the increase is not sufficient. He believes that expenditure for regular drug-susceptible TB in India requires an additional $579 million and drug resistant TB needs an additional $114 million.

In India, the government health care system is overburdened and the private system isn't transparent or highly monitored. And that can lead to problems with medical records.

With TB, particularly, the number of misdiagnosed or undiagnosed TB patients could number 1 million. In 2014, WHO suggested that the state-run Revised National TB Control Program had failed to log about 800,000 new cases of TB. A study in The Lancet Journal in 2016 found that prescriptions and drug sales for TB exceeded the national records of patient numbers by almost 2 million. So private doctors either wrongly reported or failed to report a huge number of TB cases even while treating them.

This is a reflection of the way health care works in India, Lewis says. "India has a private health system to which the majority of the population turn, and a public health system that is often in tatters through underfunding. The two systems barely talk to each other. The result is missed diagnosis, poor treatment [and] inadequate care ... that compromise patients."

Something In The Air

Several studies have concluded there is a possible link between air pollution and the risk of active tuberculosis. Studies in Taiwan, Japan and the U.S. show that long-term exposure to particulate matter — pollution particles small enough to enter the lungs and bloodstream — is associated with active TB infections. And a 2012 study found that exposure to exhaust particles from diesel-fueled vehicles suppresses the function of certain immune cells that protect against TB bacteria.

In India, the rise of TB infections has coincided with the dismal air quality index in many Indian cities. Cities like Delhi and Kanpur have seen higher incidence of respiratory illnesses and compromised lung functioning that are directly linked to the increased particulate matter in the air. Furin points out: "anything that affects local immunity of the lung or overall immunity of the body, will increase that risk of developing TB. It's pretty conclusive that smoking and increased use of cooking fuels affect the incidence of tuberculosis. Numerous studies have associated air pollution and there is a plausible mechanism of action."

The Indian government is being lauded internationally for its commitment to eliminate TB. But to reach its goals for 2025, India would need to reduce new TB cases by 10 percent every year. The WHO report shows that between 2015 and 2016, these dropped only three percent. As Lewis puts it: "The scourge of TB will never end until prevention becomes the centerpiece of TB public policy."

In his statement from his fact-finding visit in India, published days before the WHO report, Lewis writes about his experiences in the field: "The patients and survivors with whom we met were beset with difficulty. Collectively, they had stories of misdiagnosis; interrupted treatment because of excruciating side effects; family disruption; astronomic costs; stigma, discrimination, and rejection; interrupted education; inability to find or hold a job...."

"India faces a tuberculosis crisis of monumental proportions," he states. In the pediatric hospital Lewis visited, he found three or four children to a bed. The head doctor said "there was no way to isolate children with TB, nor was there focused pediatric care for children in specialized MDR-TB settings. And ... they're breaking pills for adults into small fragments, hoping for successful treatment of childhood TB."

There are so many lives at stake, he says. And "until those lives are no longer viewed as expendable, it's impossible to be confident about the future."