Accessibility links
Ugandan MP Pees In Public, Launches Debate Over Public Toilets : Goats and Soda It's not exactly clear what prompted Ugandan MP Ibrahim Abriga to relieve himself on a city wall. But one thing is certain: Kampala is one of many places where public toilets can be hard to find. 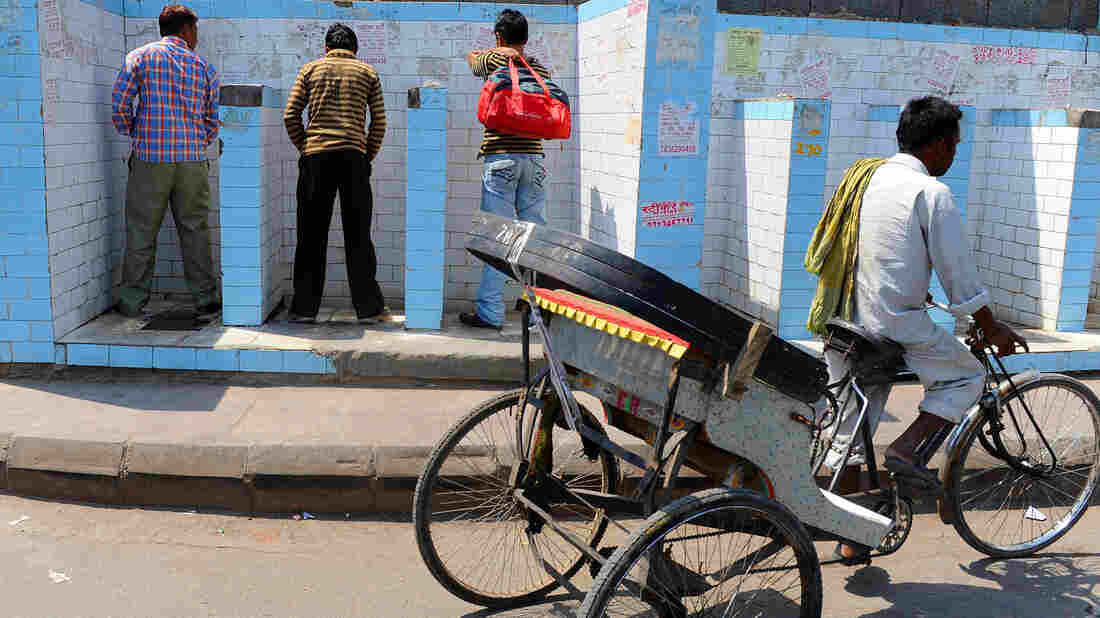 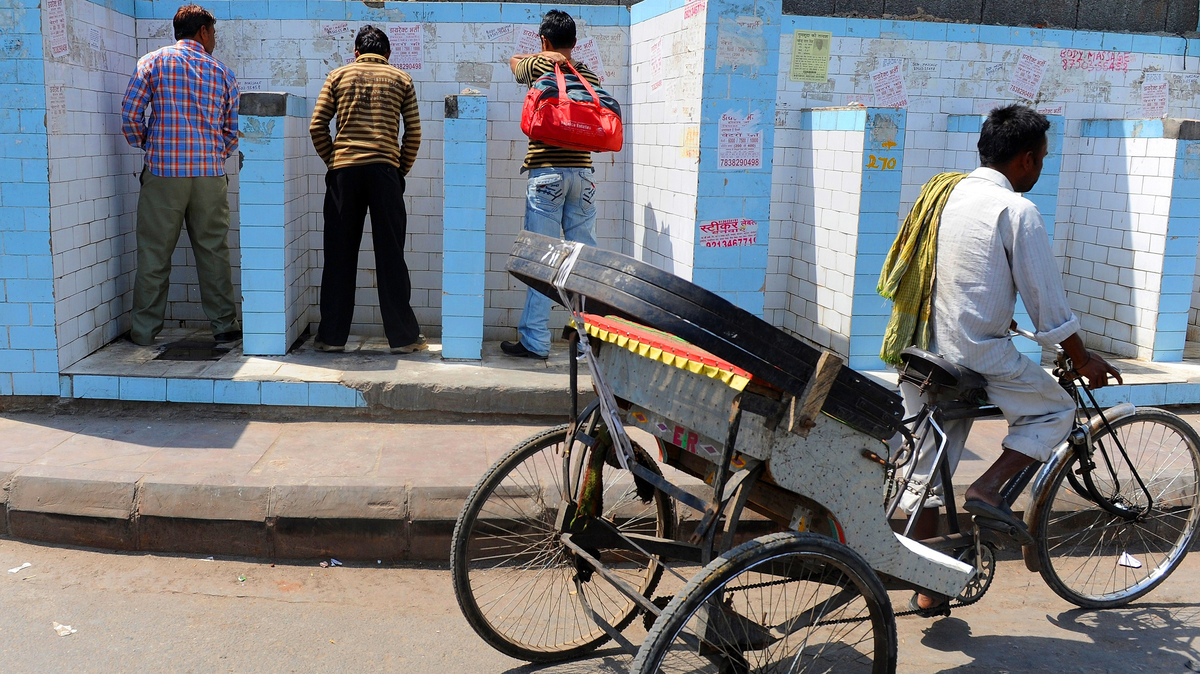 Indian men use a roadside public urinal in New Delhi.

Or at least that's what Ugandan MP Ibrahim Abiriga insisted after he went for a "short call" — a Ugandan slang term for relieving one's self — on a wall near the country's finance ministry in the capital, Kampala, in broad daylight. That was in late September.

Someone took photos of him caught in the act. The images went viral on social media, sparking outrage, jokes and spawning a new term for urinating among locals — "abirigating."

Court summons MP Abiriga for urinating in public place https://t.co/2GJwkBg8YG - Or shall we say, #Abirigating?

Now I also feel like #abirigating, but wait, im in office. Need to get to the street.. pic.twitter.com/ARXK5FPKbI

The case has thrust the issue of access to public toilets into the spotlight in Uganda. But it's definitely an issue that affects just about every city. If you take a deep inhale on a hot day, you'll understand.

"The obnoxious smell lingers, causing disgust and depleting the pride of [a city's] people," says Jack Sim, founder of the World Toilet Organization, a global nonprofit that is dedicated to better toilets for all. They call him "Mr. Toilet."

"Having no or insufficient access to toilets is a serious problem that leads to other problems," he says.

Lisel O'Dwyer, a social scientist at the Appleton Institute at the School of Human, Health and Social Sciences at Central Queensland University, agrees. "While urine is generally sterile, human feces can be a source of transmissible disease, especially through inadvertent direct contact," she says.

In the United Kingdom, she adds, the acidity in urine has damaged and stained public property like wooden doors and metal pipes.

So how many toilets should there be in public spaces?

Jack Sim says that in his dream city, there would be a public toilet available within half a mile of any location. It should be suitable for men and women, old and young, the able-bodied and people with disabilities.

"It must be clean and not smell and be private," he adds.

Now let's consider the situation in Kampala. The population is 3 million. It's hard to pin down the exact toilet count.

According to the Kampala Capital City Authority, there are 17 free public toilets.

Peter Kauju, a KCCA spokesman, adds that there are "thousands in public and private buildings" available for free use.

But finding a free toilet isn't always easy. Karim Etima, 37, a motorbike taxi driver, says he makes stops during the day to use a public toilet and often can only find privately owned facilities. He pays 300 shillings — about 8 cents — and up to 500 if he wants extra toilet paper.

And many of these toilets — both the public ones and the privately owned facilities — don't meet Jack Sim's high standards. They're pit latrines. You squat over a hole and don't have a toilet seat. There's no flush lever, water tank or soap. Not even a door lock.

Kauju said KCCA plans to scale up its number of toilets but wouldn't give more details.

Etima definitely thinks that's a good plan. "There has to be more [public toilets] and they have to be open through the night," says the taxi driver, who adds that some KCCA toilets close for the day by late afternoon or early evening.

"Only when government adopts a good toilet habit can [they] expect the people to do the same," says Sim.

Sim points to Singapore as a toilet role model. The city has 5.5 million people and 30,000 public toilets. That's because government law requires all businesses that serve the public to let the public use its toilets. And they're clean, he says, because the government can fine an establishment with dirty toilets — or, say, revoke a restaurant's operating license.

And public toilets don't have to be rudimentary. In the Indian city of Warangal, a public private partnership with the Administrative Staff College of India (ASCI) a research and training institute, has led to better designed public toilets with ramps for the disabled, a dispenser with hand-washing liquid and free sanitary pads. Municipal sanitary inspectors conduct weekly visits.

And then there's the matter of what to do with people caught urinating in public.

Abirigia pleaded guilty to committing a nuisance and was fined about $11. Many Ugandans have described the fine as too lenient.

There is one sign this reporter saw in the Kibuye suburb of Kampala: "KCCA notice no urinating here fine 200,000 [$55]."

Then again, in this case, maybe the public shame is punishment enough.

Freelance journalist Amy Fallon has reported from Africa, Asia, Australia and the United Kingdom. She is on Twitter @amyfallon