Accessibility links
Female Safari Guide From Masai Community Defies Expectations — And Prejudices : Goats and Soda If Lucy Nabiki Takona passes the silver guiding exam this month, she will be only the second Masai woman to reach this level.

Female Safari Guide: 'I Am A Lady But I Am Telling You, I Am Capable'

Female Safari Guide: 'I Am A Lady But I Am Telling You, I Am Capable' 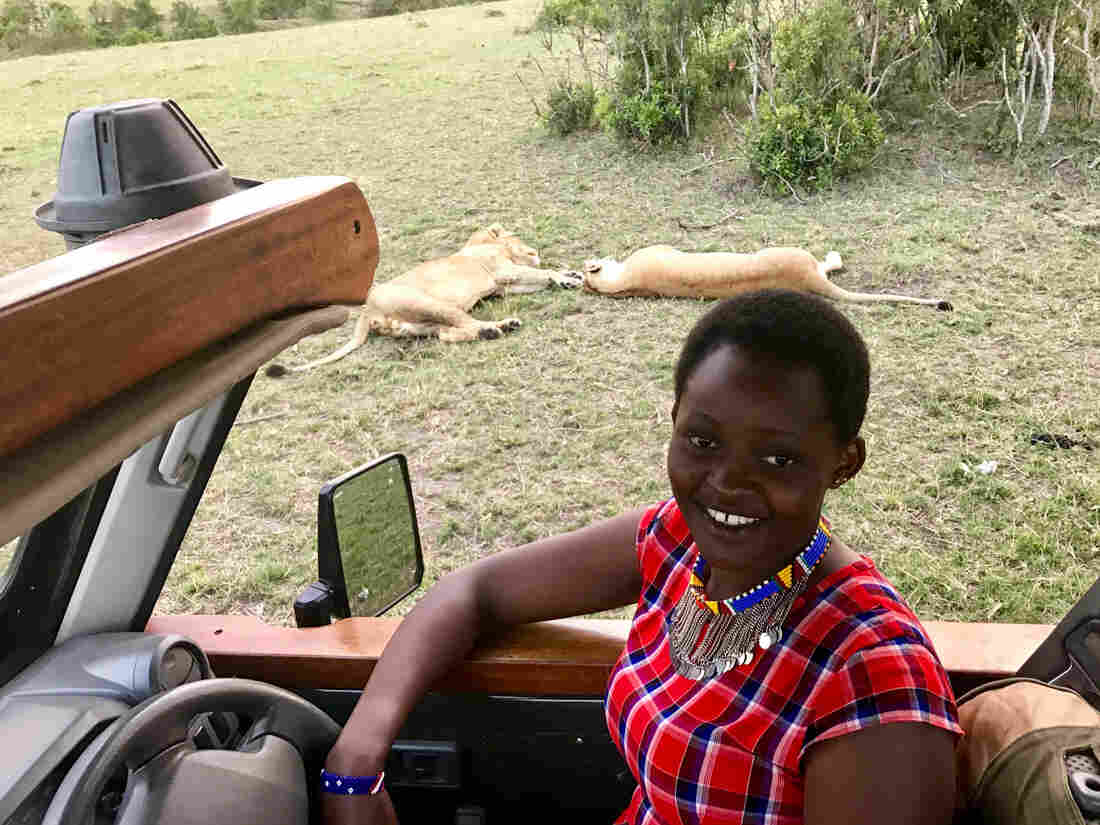 Lucy Nabiki Takona of the Masai community is a female safari guide in a male-dominated profession. Men don't always think she can handle the job, but she just forges ahead. Ginanne Brownell Mitic for NPR hide caption 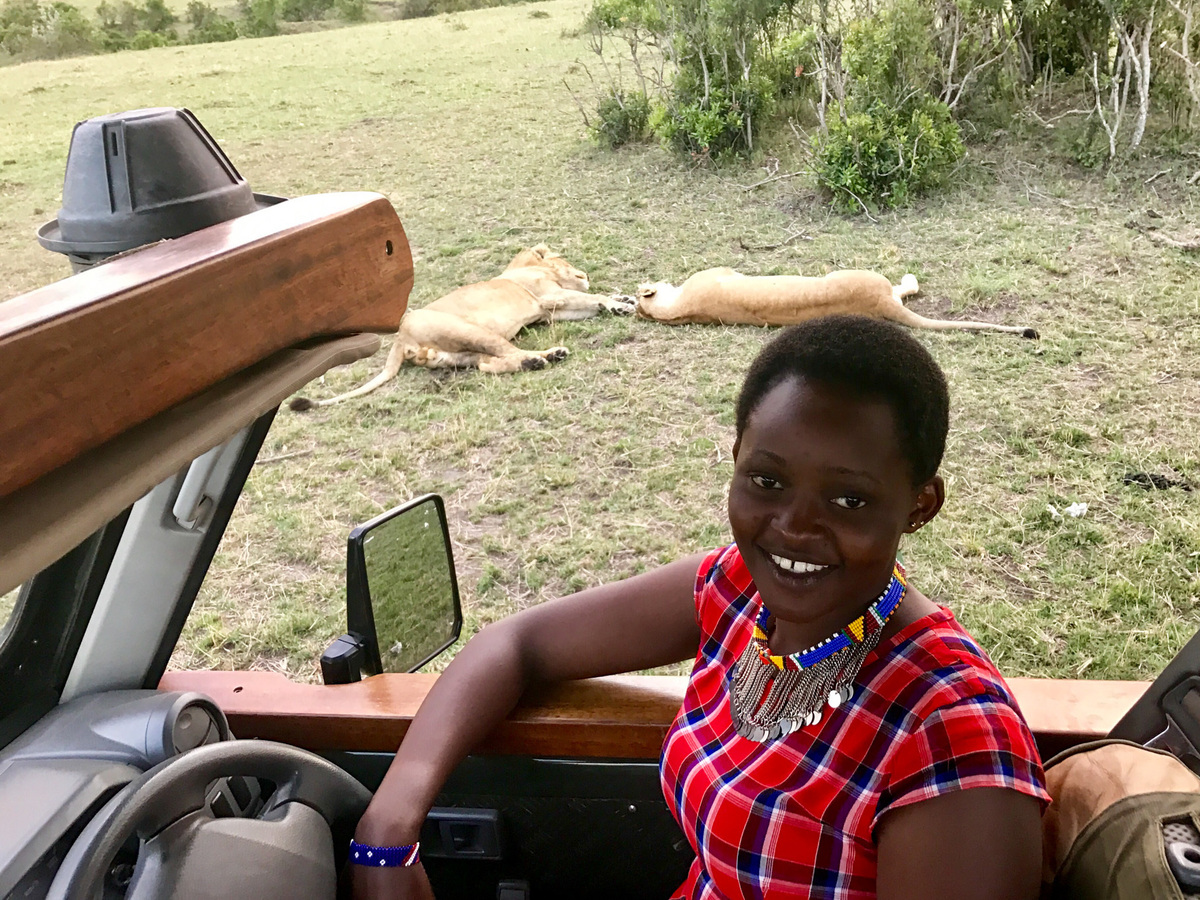 Lucy Nabiki Takona of the Masai community is a female safari guide in a male-dominated profession. Men don't always think she can handle the job, but she just forges ahead.

Ever since Lucy Nabiki Takona was a young girl growing up in a village not far from the Masai Mara game reserve in Kenya, she knew she wanted to have a career in education.

So when her father told her at age 14 that she would have to drop out of school to marry the son of her father's friend, she ran away. It took her three days to walk through the bush to her aunt's house.

"I was used to walking — getting water is far and collecting firewood is far — so for me it was not something big," Takona, 26, says. "It was more scary to get married than walk on your own in the bush."

Schooling for many Masai girls ends in their early teen years. Many undergo female genital mutilation and are married off for a dowry of cattle.

But Takona's aunt talked to some influential elders in the community who were able to persuade her father to let her continue her schooling — while another sister of Takona's was married off to the young man.

That was only Takona's first obstacle on her path to becoming a safari guide, a profession dominated by males. As a woman, she has fought an ongoing battle for education — and against harassment.

As a child, Takona says, she thought her only career option as a woman was to be a teacher. She didn't see women working in any other professions — and few, even, were educators. But during a trip to the Nairobi National Museum in her last year of high school, she realized there were other possibilities.

"A woman took us around the museum and she really had knowledge, so from that day forward I knew girls could be something more than teachers," Takona says.

So she went to study at the Koiyaki Guiding School for two years on a scholarship from the volunteer travel organization African Impact. She then worked for the group as a guide for 18 months in return.

Takona has since gone on to work for a number of safari camps dotted across the southern Mara.

"There is still an element whereby women are often looked down upon among the [Masai] community with the perception that they cannot perform as well as men," says Lincoln Njiru, a project manager with African Impact. "I would say [Takona] is a role model in the Masai community."

But on the road to success, she has had to make personal sacrifices. Takona is the single mother of a 4-year-old boy who lives with a nanny several villages away from the safari camp. She is not in touch with his father.

On Nov. 23, Takona hopes to add one more credit to her résumé. She's taking an exam to earn a silver guide's badge. Of the 4,302 members of the Kenya Professional Safari Guide Association, only 404 members have silver badges, just 15 of whom are female.

Results from the exam are announced after three days. If Takona passes, she will be only the second Masai woman to reach this qualification. Sample question: List five differences between common and Grevy zebras.

"It's unique in a [Masai] community to be an independent woman," says Evaline Sintoya Mayetu, who in March 2015 was the first Masai woman to get the silver guide qualification. "I would like to see more Masai women go for not only silver [but] go to school, to have a career of their own and break some barriers of traditional culture."

Overall guests and other guides are impressed that Takona is working in a male-dominated profession. But she says she still encounters prejudice.

"The boss at one place where I worked said, 'You cannot guide unless someone drives you.' And I asked why and he said, 'You are a lady,' " she recalls. "And I said, 'I am a lady but I am telling you, I am capable of doing it.' "

Another time, when she was speeding across the savannah to check out a leopard sighting with some guests, she overheard on the radio a few other guides questioning her ability to get her jeep through a deep gully.

"One guide said he wanted to take his vehicle before me," she says. "I told him 'No, I will cross first.' And he was talking on the radio after saying, 'Oh, she has made it. That girl's tough.' "

Ginanne Brownell Mitic writes about arts, culture and education and is the co-founder of the women's webzine she-files.com. Find her on Twitter @ginannebrownell