Accessibility links
How Dogs Are Lending A Paw To Uganda's Traumatized War Veterans : Goats and Soda In Uganda, dogs are not typically pets and are often feared. But one young man decided to see if therapy dogs might be helpful for traumatized veterans of the civil war.

How Dogs Are Lending A Paw To Uganda's Traumatized War Veterans

How Dogs Are Lending A Paw To Uganda's Traumatized War Veterans 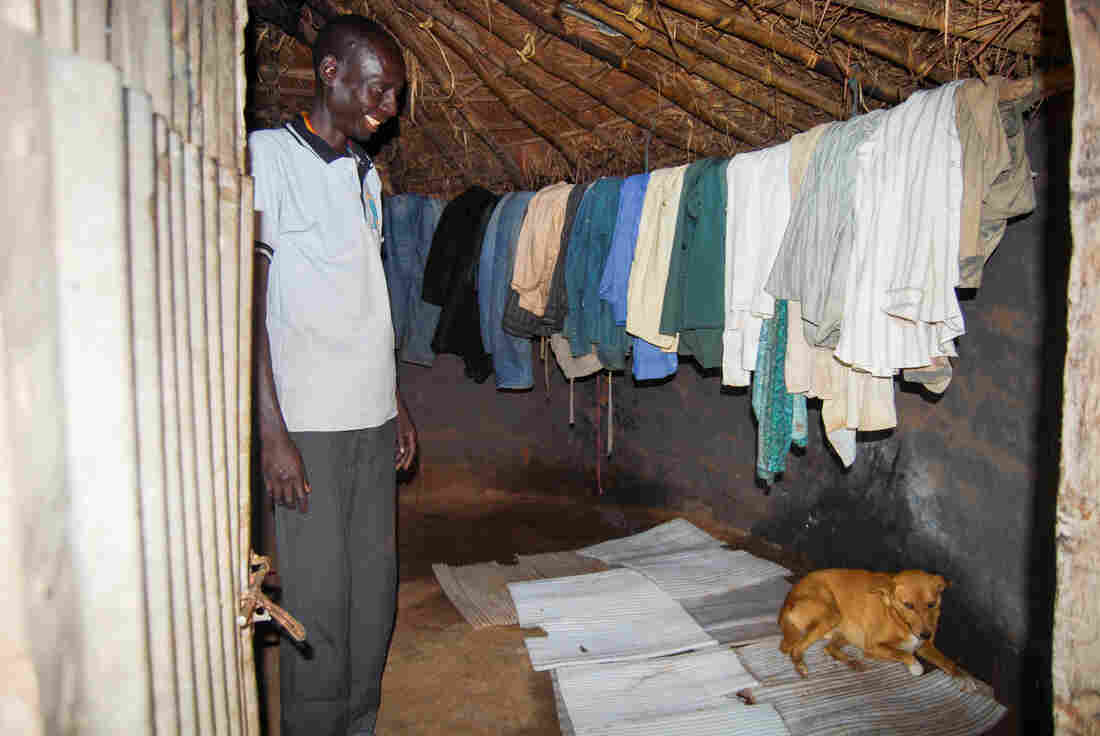 Charles Watmon and his dog, Ogen Rwot, in the house they share in Gulu, Uganda. Julian Hattem for NPR hide caption

These days, Charles Watmon shares his bed — a few sheets of thin, white foam on the concrete floor of his thatched-roof hut — with his dog.

It's not much. But to Watmon, 44, and his caramel-colored mutt, it's more than enough for a good night's sleep — and a welcome change from his past.

During the course of nearly a decade, Watmon fought on both sides of Uganda's brutal civil wars — first with the rebel group known as the Lord's Resistance Army (LRA), then with the government.

The war ended more than a decade ago, after the ruthless rebel leader Joseph Kony and his dwindling militia were chased deep into central Africa.

Yet the scars remain.

Watmon says he saw and did things during that decade at war that he will never forget. He had flashbacks. He panicked at loud noises, lashed out at others and contemplated suicide.

He also discovered he was HIV-positive in 2009, near the end of his time with the Ugandan military. His wife and two children subsequently died from AIDS.

Then he got a dog named Ogen Rwot.

Ogen Rwot, whose name means "Trust in the Lord" in Acholi, is a therapy dog. 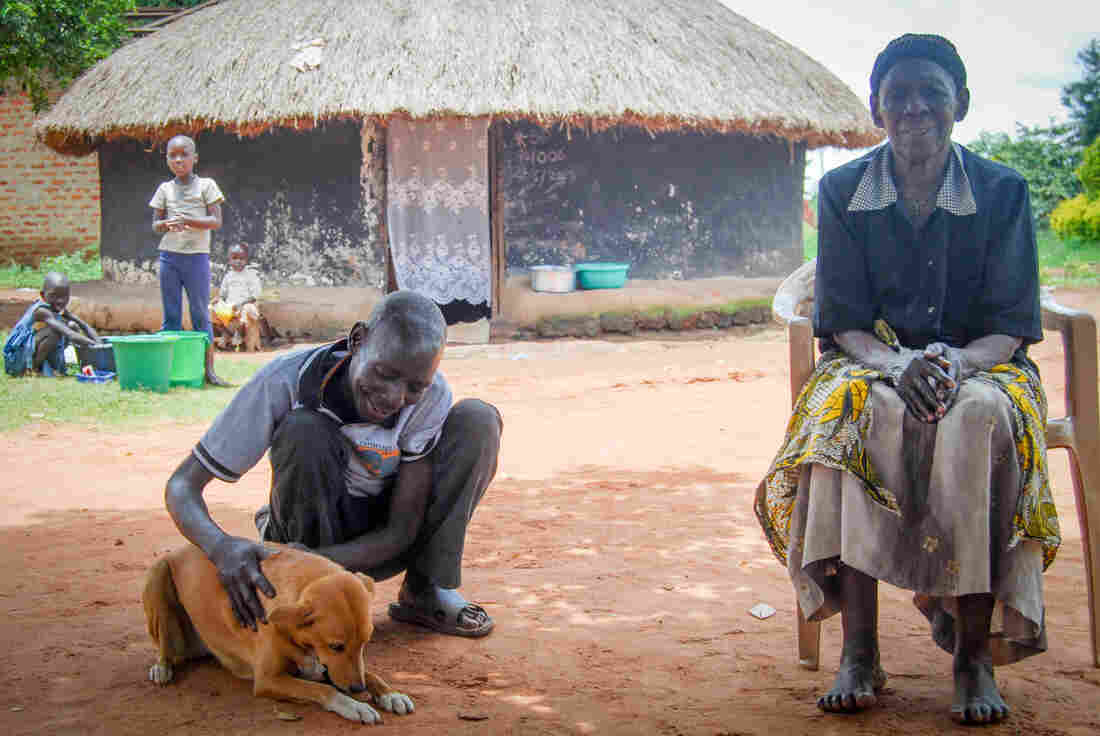 Watmon and Ogen Rwot sit next to his mother in the yard of his family's compound. Julian Hattem for NPR hide caption 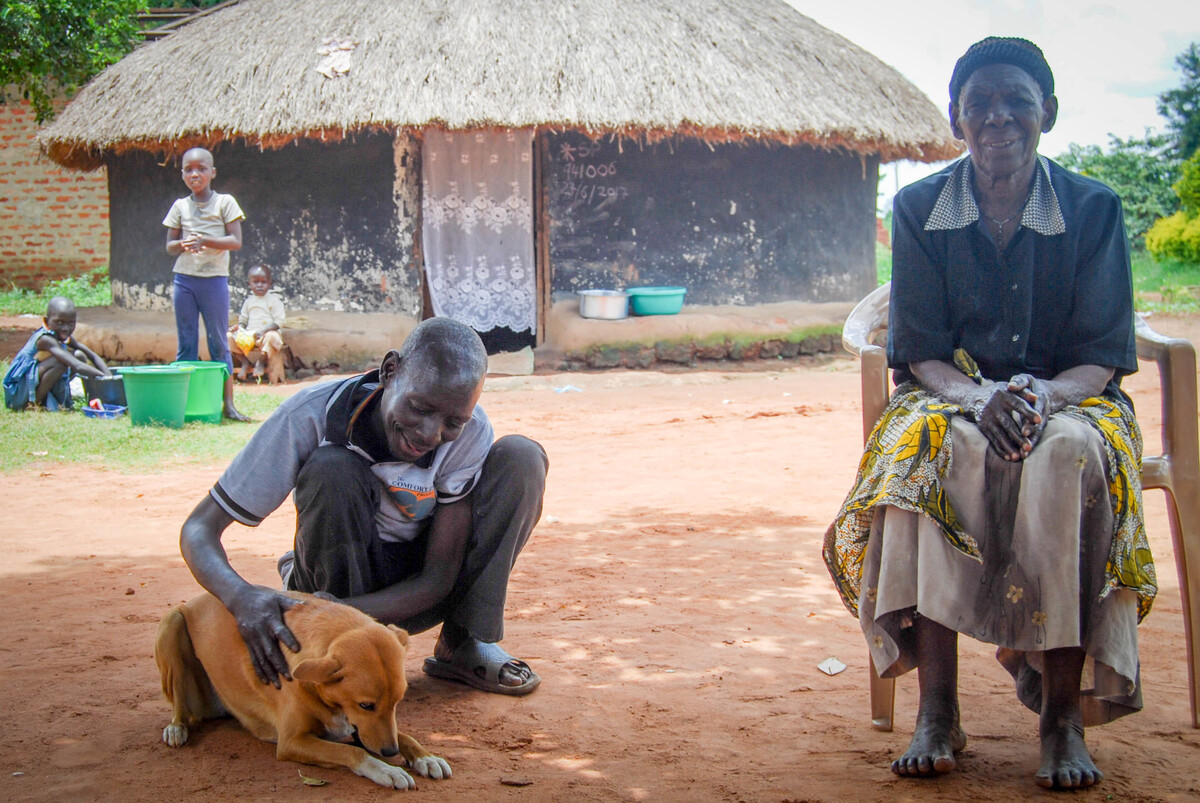 Watmon and Ogen Rwot sit next to his mother in the yard of his family's compound.

Emerging science and anecdotal evidence suggest that forming connections with dogs may help people recover from trauma — survivors of mass shootings or veterans returning from war, for example. A recent review of studies showed that the practice can lead to "reduced depression, PTSD symptoms and anxiety" — although it was noted that "further research is essential."

But the treatment is practically unheard of outside of the Western world — and is particularly novel in Uganda, where many people fear or distrust dogs.

Ogen Rwot came to Watmon through the Comfort Dog Project in northern Uganda that pairs dogs with former fighters and others traumatized by the war.

The project was started by a man who had suffered from postwar trauma himself. Francis Okello Oloya was 12 when he struck an unexploded bomb with a hoe when digging in the family garden. Fragments of metal and wood sliced through his eyeballs, blinding him for life.

While psychological treatment is rare in Uganda and he was without official diagnosis, Okello says he suffered from post-traumatic stress disorder for years. He was ashamed of his fears, especially at night when he needed to wake people up to lead him to the outdoor latrines at the boarding school he attended.

He says that two guard dogs charged with protecting the school eventually began to guide him to and from the bathrooms.

"These dogs helped me and I got relieved that I'm no problem to anyone," he says. "And I developed a strong bond with the two dogs."

Okello, now 29, studied to become a community psychologist. Though there were obstacles due to his blindness, he received books in Braille during his schooling and graduated from Makerere University in Uganda's capital, Kampala.

In 2015, inspired by the bond he had formed with the guard dogs at his school, he started the Comfort Dog Project for people suffering from depression or post-traumatic stress disorder in postwar Uganda.

The program interviews potential participants, then matches them with dogs, provides training and offers group therapy sessions to discuss how they're feeling and their relationship with their dogs.

They face unique challenges. Few Ugandans have dogs as pets — and many are afraid of dogs, which are often used as guard animals. American therapy dog programs try to pair people with dogs that have a reputation for friendliness, like labradors or golden retrievers. The Comfort Dog Project has to use whatever animals people donate — generally either because a dog is unwanted or because it has been abandoned. The project is connected with the only veterinary clinic in this part of the country, which has become a resource, linked them to unwanted dogs.

To identify participants and get the word out, Okello talks with community leaders and spreads information through informal networks.

Each participant undergoes several weeks of counseling before being paired with a dog. Then they're given pet supplies like a leash and dog bowl and five months of weekly sessions to teach the dogs to follow commands like "sit" and "stay."

There are eight people now in training with the dogs.

American Sarah Schmidt, whose U.S.-based nonprofit runs a veterinary clinic called the Big Fix in Gulu, Uganda, helped Okello get the program up and running — and helped him find initial funding.

Most of the donors are Americans, Schmidt says, and have also given to her group, Central Valley Coalition for Animals. Last year, the Comfort Dog Project received grants from the William and Charlotte Parks Foundation and the Alice Morgan-Wright/Edith J. Goode Trust. But, Schmidt says, most of the funding comes from her own private estate. In addition, three pet supply companies provide equipment and a New Zealand trainer has given free access to his training library.

"For every slot, we have 10 people who would wish to be selected," Schmidt says via email.

Lucy Adoch is a believer. She was 14 when she was abducted by the L.R.A. She was given a gun and forced into marriage with a rebel commander, she says, a situation that might be better described as sex slavery. She spent five years with the L.R.A.

Post-war, she had nightmares and difficulty sleeping for more than a decade after she escaped.

Then she found the Comfort Dog Project and, soon after, came Sadik, a grey dog with short legs and a pinched face.

Adoch, 39, is a tailor — and Sadik sits at her feet as she tends to her sewing machine day after day.

"My husband started to complain that sometimes I will be talking loud in my dream, calling Sadik's name. I tell him that it's because I love Sadik and we play a lot," she says.

Adoch, like many graduates of the program, comes back as a trainer for new classes and brings Sadik to the veterinary clinic for checkups. After a recent session, they lounged in the sunshine before Adoch stood up and started throwing a ball for Sadik to chase.

Since Sadik came along, Adoch says, her "nightmares have been replaced." Now, she says, she "only dreams of playing with Sadik."

Julian Hattem is a freelance journalist based in Uganda. Reach him @jmhattem