Accessibility links
Ivy League MBAs Find Their Calling Amid Pineapples Of Ghana : Goats and Soda Jerry Parkes graduated from Wharton and decided to return to his homeland to put his business acumen to use in the agricultural field. 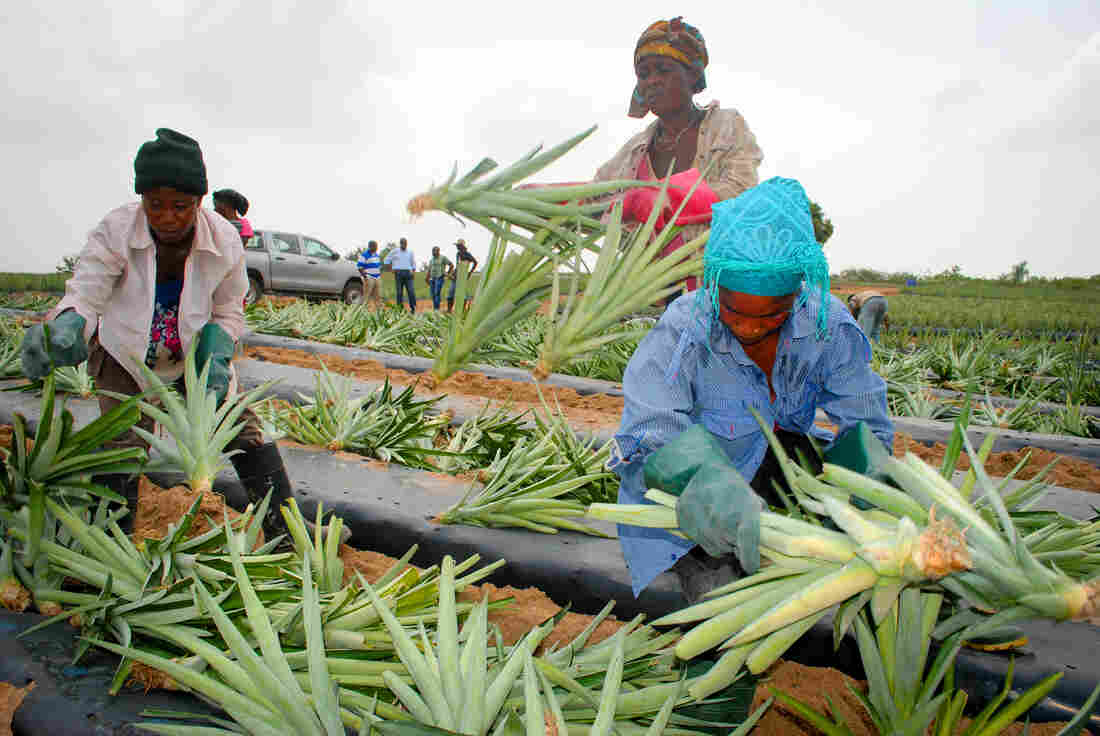 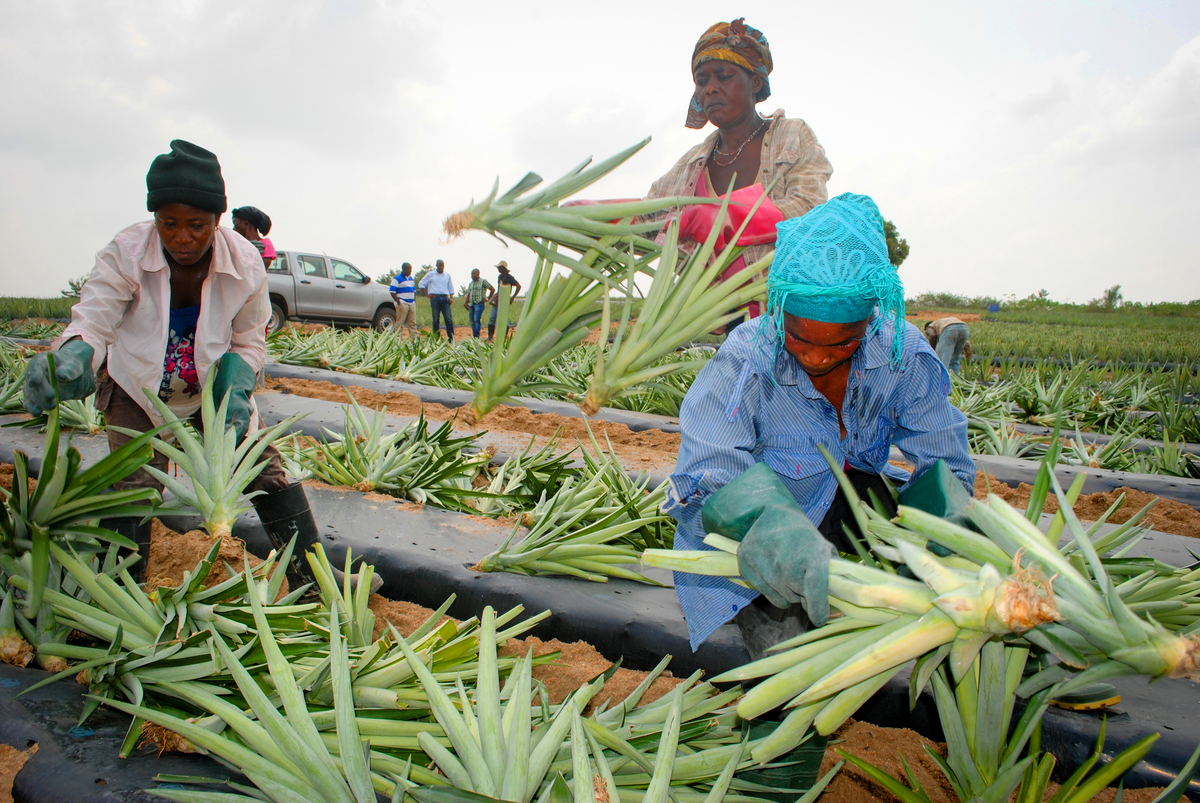 Jerry Parkes stands in a vast field of spiky leaves and peers at a pineapple that is larger than usual. "Wow, look at the size of this fruit!" he exclaims.

A former London investment banker on a Ghanaian farm seems like a fish out of water. But for Parkes, leaving his finance career was part of a plan to return home and expand agriculture in Africa. Parkes co-founded Injaro, a private equity fund that invests in agricultural businesses in West Africa such as Gold Coast Fruits, this pineapple farm about 30 miles north of Accra.

Did Parkes, 43, know much about pineapples before Injaro invested in Gold Coast Fruits? "I knew how to eat one," he jokes. He admits he needed a crash course in farming: "The closer you get to it, you realize how complex it is."

Injaro's goal is to boost agriculture in Africa, an overlooked and underfunded industry that is critical for the continent's future. Although Africa has rich natural resources and strong agricultural potential, it imports $35 billion of food each year even as its fast-growing population demands more. "Agriculture remains the Achilles' heel of Africa's development success story," according to the African Development Bank.

Parkes, chief executive of Injaro, is from Ghana, while co-founder and chief operating officer Dadié Tayoraud is from Ivory Coast. The two started Injaro in 2009, a few years after they graduated from the University of Pennsylvania's Wharton business school. Parkes recalls Tayoraud introducing himself at their first meeting at Wharton's African students' club.

He remembers Tayoraud's energy, enthusiasm and humor. "He wanted to start a movement where all African students move back to Africa after the MBA," Parkes says. "For most of the rest of us, it was about succeeding, making it big in London or New York. After we succeeded, then we'd move back to Africa as a senior executive."

After graduating from Wharton in 2006, Parkes, an electrical engineer by training, worked for UBS bank in London and as a fund manager investing in U.K. companies. Tayoraud worked in business development in Ivory Coast for Voodoo, a telecommunications company.

Parkes returned to Ghana with his wife and young children in 2009 to launch Injaro, in spite of "all the pressures to stay in the West where you can make a lot of money and not have to struggle," he says.

He didn't immediately announce his plans to his mother. Instead, he arrived back in Ghana for the winter — and kept extending his stay while he started Injaro. "She's a typical African mother who would think if you have a good job in London, there's no reason to walk away and start something uncertain," Parkes explains. "There would have been a lot of conversations second-guessing what I was doing."

Ultimately, Parkes and Tayoraud wanted to grow businesses that would have a positive impact for as many people as possible. For them, the obvious choice was agriculture, which provides about 60 percent of all jobs in Africa. 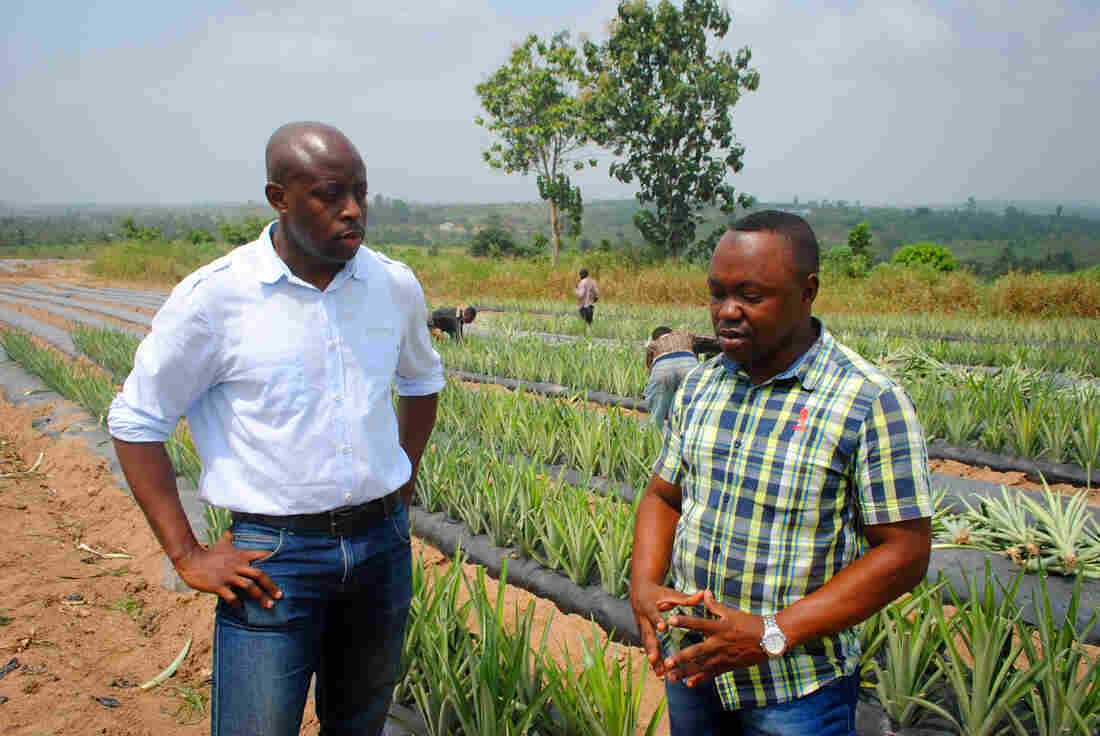 Wharton grad Jerry Parkes (left) is the co-founder of Injaro, a private equity fund that is investing in agriculture in Ghana. Amy Yee for NPR hide caption

But agriculture is a precarious industry that faces natural risks such as unpredictable weather, drought, pests and disease along with additional challenges like political instability and poor supply chains.

And there's a lack of modern agricultural resources — high-yield seeds, fertilizer and agricultural techniques — and a lack of investment. Sub-Saharan Africa needs about $11 billion for agricultural investment, according to the U.N.'s Food and Agriculture Organization.

Yet investors are leery of doing business in the sector.

"Investing in agriculture is risky. Many people have been burned," says Ben Valk, head of food and agriculture partnerships at Dutch bank Rabobank, which operates in 10 countries in Africa. "The returns are not particularly good. You have to really know what you're doing."

"Agriculture won't give the same returns as technology," Parkes admits.

But he had a different perspective: "A traditional investor asks, 'How do I make money?' We think, 'How do I solve a problem while making money?' "

Injaro raised an investment fund of $50 million from investors that include Soros Economic Development Fund; CDC, the private sector arm of U.K. aid agency DFID; AGRA, an agriculture nongovernmental organization backed by the Rockefeller Foundation; and others.

The company has invested in a chicken producer in Ivory Coast; cashew, shea butter and poultry feed companies in Ghana; as well as Gold Coast Fruits, the pineapple company in Ghana.

A notable success was Injaro's investment, in 2013, in Nafaso, a high-yield seed company in Burkina Faso. Nafaso nearly tripled seed production between 2012 and 2015 and expanded sales to other countries. In February 2017, Injaro had its first "exit" when it profitably sold back its share of Nafaso to the company's founders after meeting production and financial targets.

Gold Coast Fruits is not yet profitable but is one of the area's largest employers, with about 200 workers.

Gold Coast's Ghanaian founders started the pineapple farm in 2005. But it was no easy task to cultivate export-quality pineapples year-round for markets in Europe and the Middle East while avoiding plant diseases, waiting for rain (the farm, like most in Ghana, has no irrigation) and managing workers. And Gold Coast Fruits had taken big loans and didn't have enough funds to invest in improving the farm. "It just takes one mistake and you're stuck," says Parkes.

Not to mention it takes 14 to 18 months to grow a single pineapple, each in a nest of crown-like leaves.

After Injaro invested in Gold Coast Fruits in 2016, it spent six months restructuring the company's bank debts. "Now that money is not a big problem, there's more time spent on making the farm better," says Parkes. More cash allowed the company to bulk-buy fertilizer, invest in new equipment and technology, and tackle problems of soil erosion and plant rot.

At one section of the 1,200-acre farm, workers bend over rows of soil. Beneath a hazy, humid sky, they stab holes in the ground with machetes and quickly insert pineapple plant seedlings. Their arms move in a blur of mechanical precision.

Patrick Serebour, farm manager, has been with Gold Coast Fruits for a decade. With gradual improvements and guidance from Injaro, Gold Coast Fruits now produces up to 50 tons of pineapple per 2.4 acres per harvest compared to a maximum of 35 tons in the farm's early years. The company now expects up to 70 tons in future harvests. The improved productivity "has been very fantastic," says Serebour.

Right now, 20 tons of pineapples are picked, washed, inspected and packed for export each day.