Accessibility links
Diphtheria Comes Back To Haunt Yemen And Rohingya Refugees In Bangladesh : Goats and Soda It's thought of as a disease of the past. But now there are outbreaks in Yemen and Bangladesh. 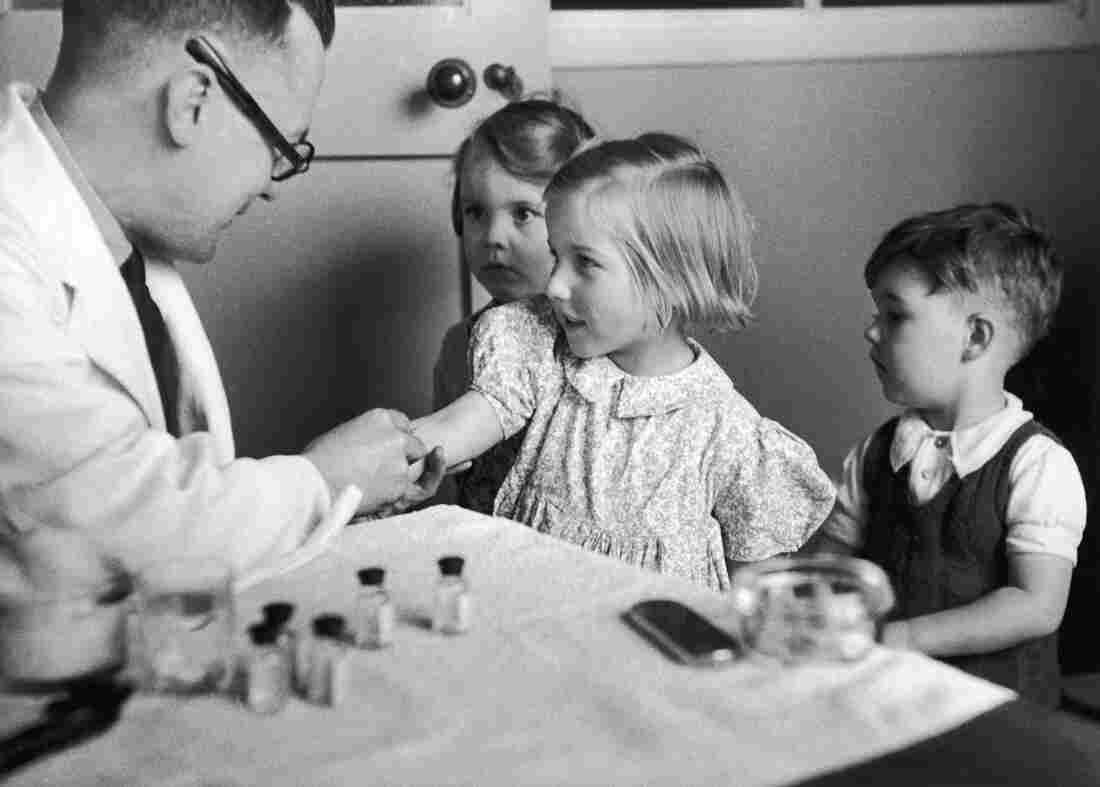 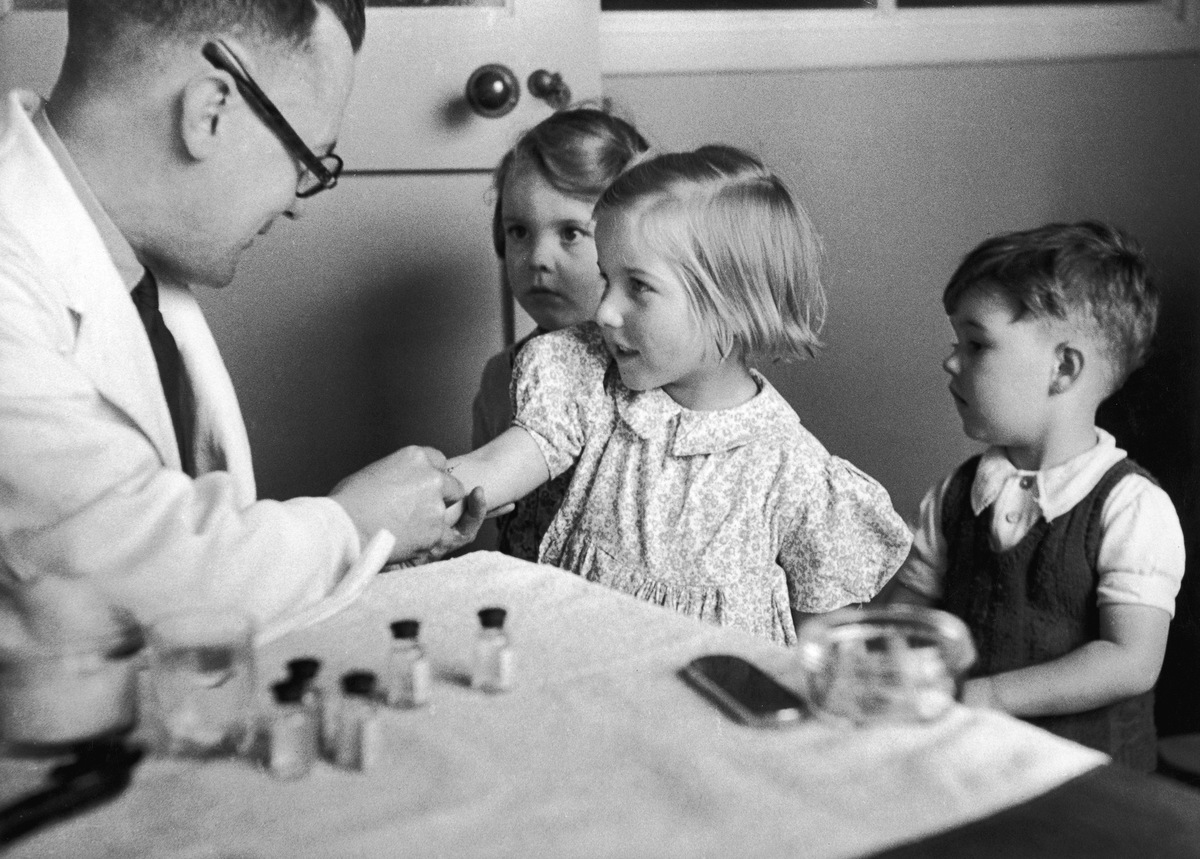 Children get their diphtheria inoculation in 1944.

In the first century, a doctor called Aretaeus of Cappadocia described the rotting smell of "Egyptian ulcers." Ancient Chinese medical literature mentions a disease called "children-killing carbuncle." In 17th century Spain there were references to an illness known as "the strangler."

They were talking about diphtheria, a highly infectious respiratory disease that colonizes a person's nose and throat, creating a thick layer of dead cells that can block the airway. It has always had a reputation for sickening children.

With the introduction of a highly effective vaccine in the 1920s and early '30s, diphtheria faded away in much of the world. Today it's largely considered a disease of the past. But now it's back in the headlines, spreading quickly in places like Bangladesh and Yemen. The World Health Organization says it is sending a shipment of antitoxins to Bangladesh this weekend, after six deaths in a Rohingya refugee settlement. The organization did the same last week for Yemen, where at least 30 have died of the bacterial infection, many of them children.

"It is shocking that in 2017, there are children dying of an ancient disease that is vaccine-preventable and can be easily treated," says Dr. Nevio Zagaria, the WHO representative in Yemen.

What does the name diphtheria mean?

First things first. The disease is named for the bacterium that causes it: Corynebacterium diphtheriae. Diphthera is Greek for "skin" or "hide," a reference to the thick membrane that forms in air passages. It can be pronounced two ways: "diff-THEE-ree-uh" or "dip-THEE-ree-uh."

The bacterium that causes diphtheria can live in some people without causing them to show symptoms, which can occasionally lead to a Typhoid Mary-type situation where a person spreads it around without even realizing he has it.

It spreads between people in infected coughs and sneezes. Kids can also pick it up from playing with contaminated toys. Symptoms include sore throat, a low fever and lack of appetite, followed by a visible grayish coating in the nose or throat, and a swollen throat sometimes called a "bullneck."

What does it do to people?

The bacteria attach to the lining of the respiratory system and produce a poison that starts killing healthy tissue. It does so by preventing cells from creating proteins, which essentially shuts them down. After a few days, it can kill so many cells that dead tissue forms a grayish layer in the nose and throat that can make it hard to breathe or swallow. Essentially, it can choke a person on his own dead cells. If the poison also gets into the bloodstream, it can damage vital organs like the heart and kidneys. Interestingly, there are actually two layers of infection going on here, because it's a virus inside the bacterium that causes it to create the toxin in the first place. Eventually, the illness can cause nerve damage, paralysis and respiratory failure.

A vaccine was invented in 1921 but wasn't used widely until the 1930s. It is a modified form of the toxin that is not poisonous but still teaches the immune system to recognize the toxin in the future. These days, people usually get a three-in-one vaccine for tetanus, whooping cough and diphtheria.

Once a person is sick, he has to take antitoxins and antibiotics to get rid of the infection. Antitoxins keep the poison from further harming the body. A 14-day course of antibiotics kills the bacteria. It takes about two days after starting antibiotics before a person is no longer contagious.

Without treatment, diphtheria can be a real problem. For example, in 1921, before the vaccine was available, the disease killed more than 15,000 people in the U.S. According to the Centers for Disease Control and Prevention, the U.S. has seen fewer than five reported cases in the past 10 years.

Why is it a problem in places like Yemen and Bangladesh?

Infections can pop up under the wrong conditions, which include vaccination coverage below about 80 percent, malnutrition and lots of people living in close contact, and poor access to medical care, all of which are currently present in outbreak areas in Bangladesh and Yemen.

This year, more than half a million members of the Rohingya ethnic group have fled to Bangladesh from Myanmar, where violence against them, including execution, arson and rape, has been denounced by the United Nations and the U.S. State Department as ethnic cleansing. In a border city called Cox's Bazar, refugee camps reportedly house up to 30 people per tent.

In Yemen, WHO researchers reported that vaccination rates among children had dropped below 70 percent after a civil war started in 2015, meaning the population was no longer protected by herd immunity, the concept that if enough people are immune to a disease, any individual who hasn't been vaccinated won't encounter the disease. The vaccination rate remained low in 2016, at 71 percent. In the past few days, blockades have prevented organizations like Doctors Without Borders from shipping medical supplies. The country has also suffered from a shortage of health professionals since its central bank stopped paying them.

Could it make a comeback in other countries as well?

To pick a much smaller example, in 1996 researchers found 11 people with diphtheria in South Dakota, where the infection was thought to have disappeared.

In Bangladesh, WHO and partner organizations are now training people to give vaccines against diphtheria and other diseases to all children under the age of 6.

Rae Ellen Bichell is a science journalist based in Colorado. She previously covered general science and biomedical research for NPR. You can find her on Twitter @raelnb