Accessibility links
Drugs To Fight 'Neglected Tropical Diseases' Can Cost Far More In The U.S. Than Abroad : Goats and Soda The medication fights hookworm. It's one of several drugs for "neglected tropical diseases" that are priced differently in the United States than they are in the developing world. 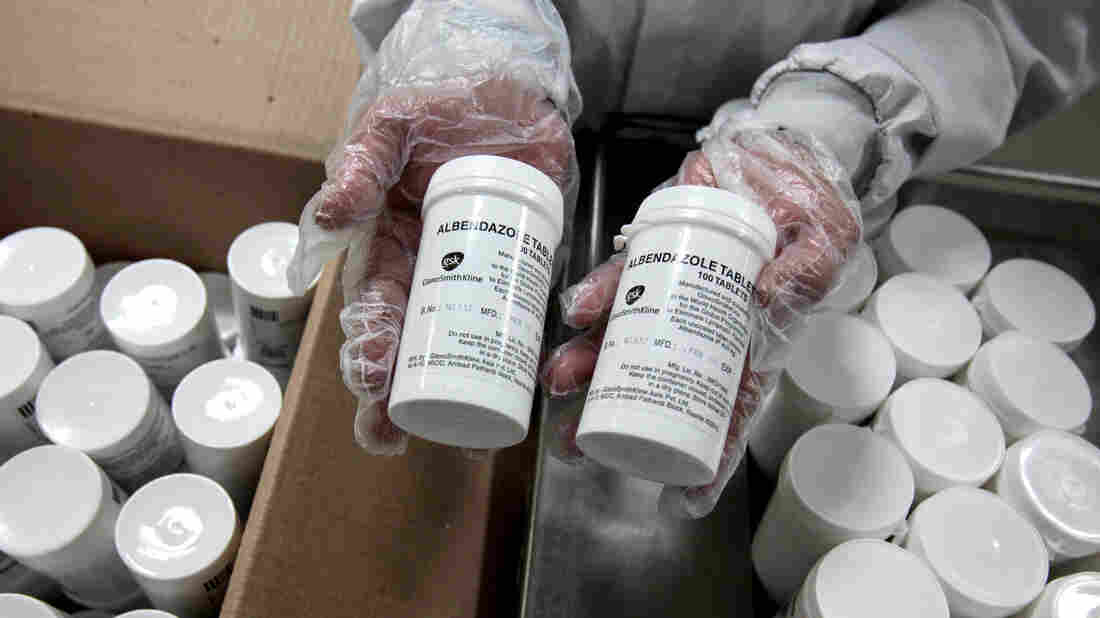 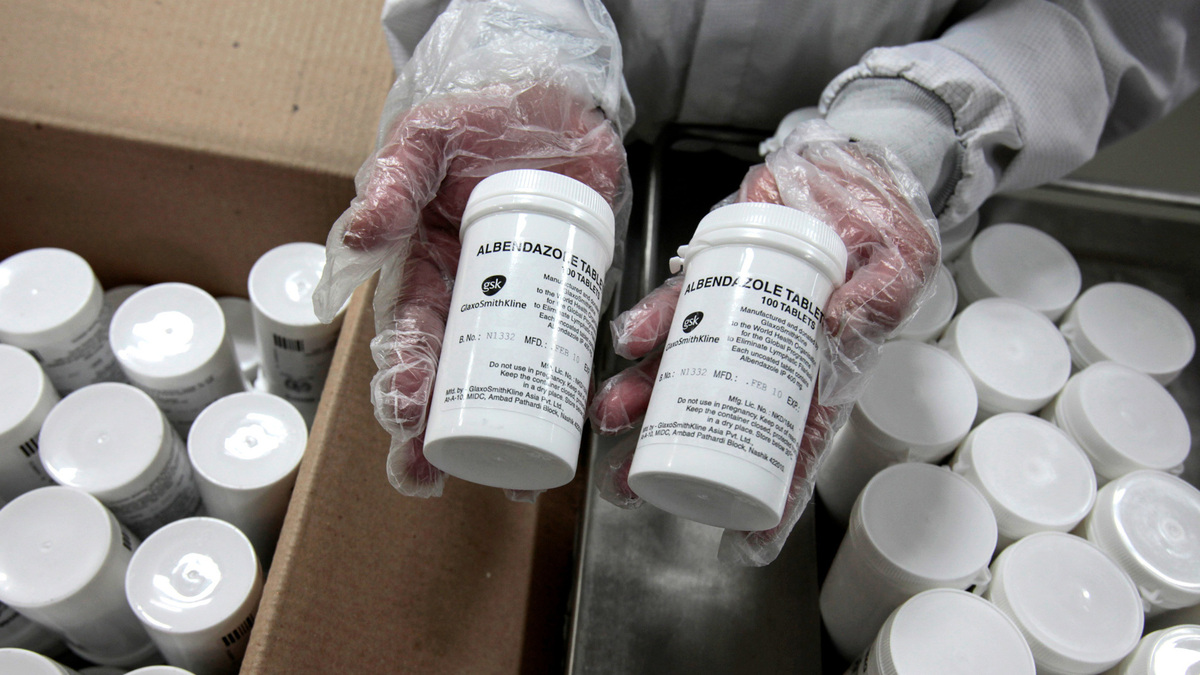 An employee of GlaxoSmithKline Pharmaceuticals holds bottles of albendazole, an anti-hookworm medication.

It just depends where you live.

The 4 cents is in Tanzania. That'll cover the two pills it takes to knock out the intestinal parasite. But in the United States, where hookworm has re-emerged, the price for two 200 mg tablets of albendazole can cost as much as $400.

The pill will put an end to the problems hookworm can cause, such as anemia and protein deficiency as well as stunting growth in children.

It's not just a problem with the anti-hookworm pill. Drugs for diseases of the developing world, in particular what are known as "neglected tropical diseases" like hookworm and leishmaniasis, are enormously more expensive in the United States than in the developing world.

"There really is no good reason for this price," Dr. Jonathan Alpern says of the albendazole price tag. Alpern works for the HealthPartners Institute, the research division of a health care organization in Minnesota.

Impax Laboratories is the only pharmaceutical company that offers the drug in the U.S. Impax did not wish to comment on product pricing for this story but stated in an email to NPR: "Given the very different regulatory regimes in the U.S. versus outside the U.S., pricing is a very awkward comparison."

Because the drug's patent expired decades ago, other companies can sell the generic version. But for medications that fight neglected tropical diseases, pharmaceutical companies have been slow to jump in and manufacture the medicine.

As for those that do: "[Impax] fits into a category of companies that have taken drugs that have been around for many years, acquired the rights and jacked up the price [for the Western market]," says Alpern.

Indeed, prices for generic drugs that treat neglected tropical diseases are skyrocketing in the U.S.

When a disease affects only a small number of patients in the U.S., "there's less incentive for generic companies to enter the market," Alpern explains. That's because there's less potential for profit.

Hookworm, which was recently discovered in a small community in the U.S., is just one example of this trend.

Neurocysticercosis, a parasitic disease that causes seizures and epilepsy, is another example. The disease is rare in the U.S. with an estimated 1,000 to 5,000 new cases every year. Either albendazole or praziquantel are used to treat the disease. Praziquantel is also pricey: about $525 for six 600 mg tablets.

Leishmaniasis, which affects 700,000 to a million people annually throughout the world, is more expensive to treat in the U.S., too. Though rare in the U.S. — only 13 cases were uncovered between 2000 and 2007 — the disease can cause disfiguring skin sores or swelling of the spleen or liver depending on the form of the disease that's contracted. Two 50 mg tablets of miltefosine for 28 days can treat the infection; the price of each pill wholesale is $685, according to Alpern's research.

"When there's limited competition in the market, the company that holds the monopoly is able to price [the drug] however they want," Alpern says. "In these cases, we often see companies taking advantage of their market position."

And some of these disease aren't all that rare. Dr. Peter Hotez, dean of the National School of Tropical Medicine at the Baylor College of Medicine, says certain neglected tropical diseases in the U.S. are surprisingly widespread, especially among those who may not be able to afford treatment.

For example, he estimates that 1.1 million Americans are annually diagnosed with a parasitic infection called toxoplasmosis. The treatment is Daraprim; four 25 mg tablets currently cost between $3,000 and $3,400 on the U.S. market.

Some of them are in Lowndes County, Ala., where a community of individuals was recently discovered to have hookworm. The average income in the county is just $18,036.

If patients don't have health insurance, they must pay the full price for prescriptions or skip treatment altogether.

"Some of the people in Lowndes County are living off $600 or $700 a month," says Catherine Flowers, founder of Alabama Center for Rural Enterprise, a nonprofit that addresses poverty. "People have told me they sometimes have to choose between buying medication and eating."

In cases where patients have Medicaid, taxpayers bear the burden.

Other times, U.S. patients bypass the system, Alpern says, by asking relatives in other countries to bring them the drug they need. In the United Kingdom, for example, 400 mg of albendazole costs just $2.

Why are prices so different in the U.S.?

"In other countries, there are price control methods. The government steps in to ensure drug prices do not increase by a certain amount," Alpern says. "There are no price control mechanisms in the U.S."

For patients with hookworm, there are few treatment alternatives in the U.S.

Mebendazole, which is less than half as effective than albendazole, according to hookworm expert Dr. David Diemert, is considered the second generic line of treatment for hookworm. Impax Laboratories also owns the rights to the drug. Between 2011 and 2016, mebendazole's price jumped more than 8,000 percent, from $4.50 to $369.

Hotez agrees with Alpern's theory that pharmaceutical companies have a profit motive.

"Presumably, small companies see a niche to make some quick cash," Hotez says. Meanwhile, in low-income countries, he says, "many of these drugs are being donated for free [by pharmaceutical companies]. As an example, albendazole is donated by GlaxoSmithKline."

According to its website, Impax is "committed to making ENVERM [mebendazole] more affordable." The pharmaceutical company shared an online coupon that can save patients up to $60 for a prescription that would cost more than $369.

Alpern hopes to see more companies start manufacturing the generic version of the drug. In his eyes, that's the ultimate solution.

Nadia Whitehead is a freelance journalist and a science writer at Texas Tech University Health Sciences Center El Paso. Her work has appeared in Science, The Washington Post and NPR. Find her on Twitter @NadiaMacias.