Accessibility links
Photographer Takes Stunning Portraits Of Endangered Animals : Goats and Soda And the well-being of humans could suffer if the species go extinct. The images are from the new book Endangered by Tim Flach. 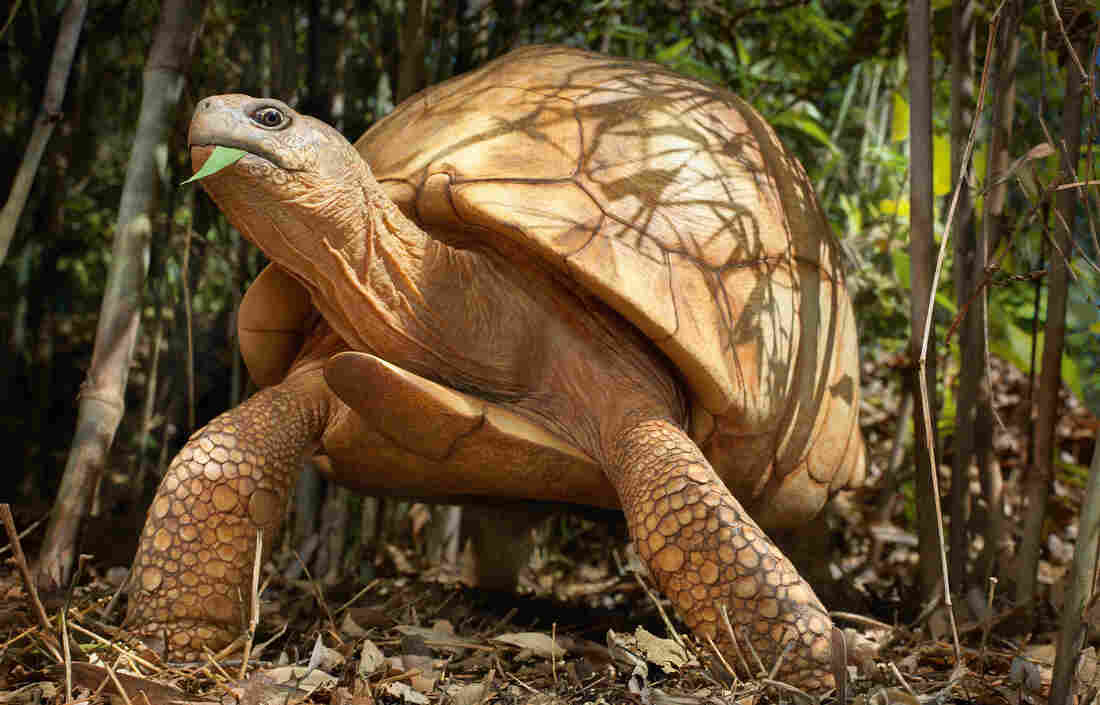 Wildlife poaching and capturing ploughshare tortoises from the wild to sell as exotic pets has brought the species toe-to-toe with extinction. A single tortoise can fetch $4,000 on the black market. Tim Flach hide caption 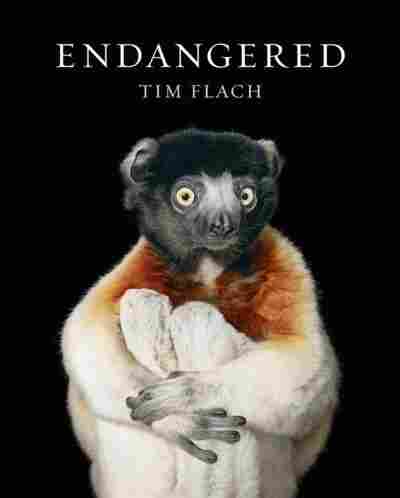 Earth is facing an extinction crisis – and humans shoulder the blame.

Wildlife poaching and illegal trade. Climate change. Urbanization. Mining. These are some of the myriad things we do that endanger animals and, in the process, damage our own well-being.

Three-quarters of the Earth's estimated 8.7 million species are at risk, according to a 2011 PLoS Biology study. Of course it's not always our fault, but even the most conservative estimates, like one published in a 2015 Science study that uses the fossil record, suggest that the current extinction rate based on vertebrate data is up to a hundred times higher than it would be without human intervention.

Scientists and news reporters throw about these numbers, but for the half of humans who dwell in cities, the problem may seem pretty distant. We may not notice the fallen ash trees crisscrossing the forest or the gradual disappearance of the North American red wolf.

Photographer Tim Flach is trying to bring imperiled species and the threats they face eye to eye with an audience estranged from nature in his new book Endangered. "The romanticizing, free, wild images [of animals] weren't necessarily getting people to take action," Flach says. "I wanted to think about what kind of images people engage in and how you tell a story to get people to connect to [the animal]."

Flach says that in conservation research, scientists have noticed that people relate more when there is a mild anthropomorphizing of an animal. "Images often done in a style and representation that was more like humans was more likely to make us care more," he says. 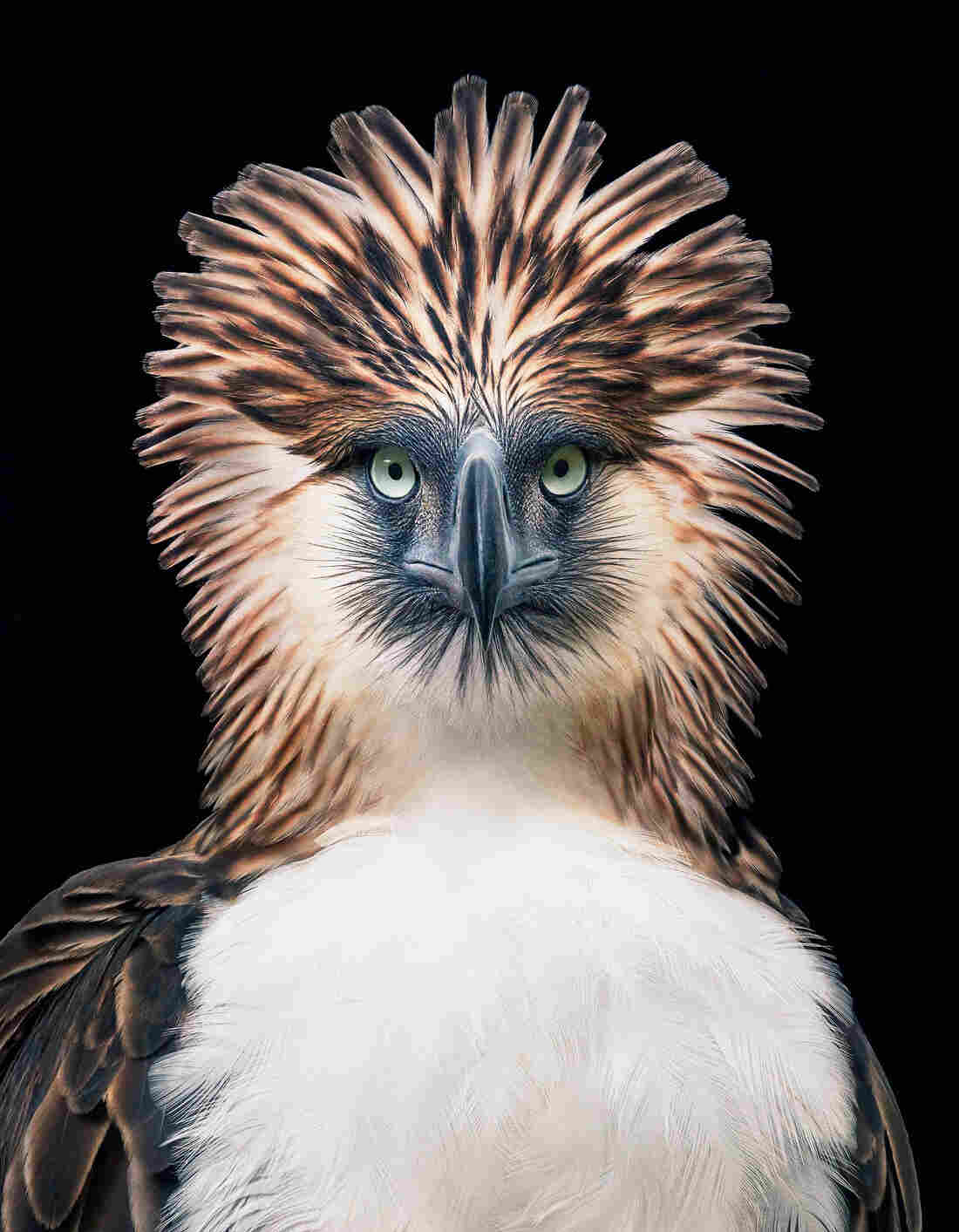 As a result, Endangered carries many close and intimate animal portraits, which Flach creates using a black background — sometimes in a studio or a zoo and sometimes using lights and a black backdrop in the wild. "I'm isolating it down to the personality. A bird of prey that would normally be photographed as a bird in a tree, instead if you look into their eyes and question our accountability [as humans] makes it more powerful," he says.

But the book carries images that take the focus away from animals, too. "It's important for a book that has a lot of portraits to also [have] a sense of the habitat," Flach says. He uses abstract photographs as a reminder that these animals depend and help maintain the environment that provides necessities to them and humans, who need ecosystems for food, air and water. 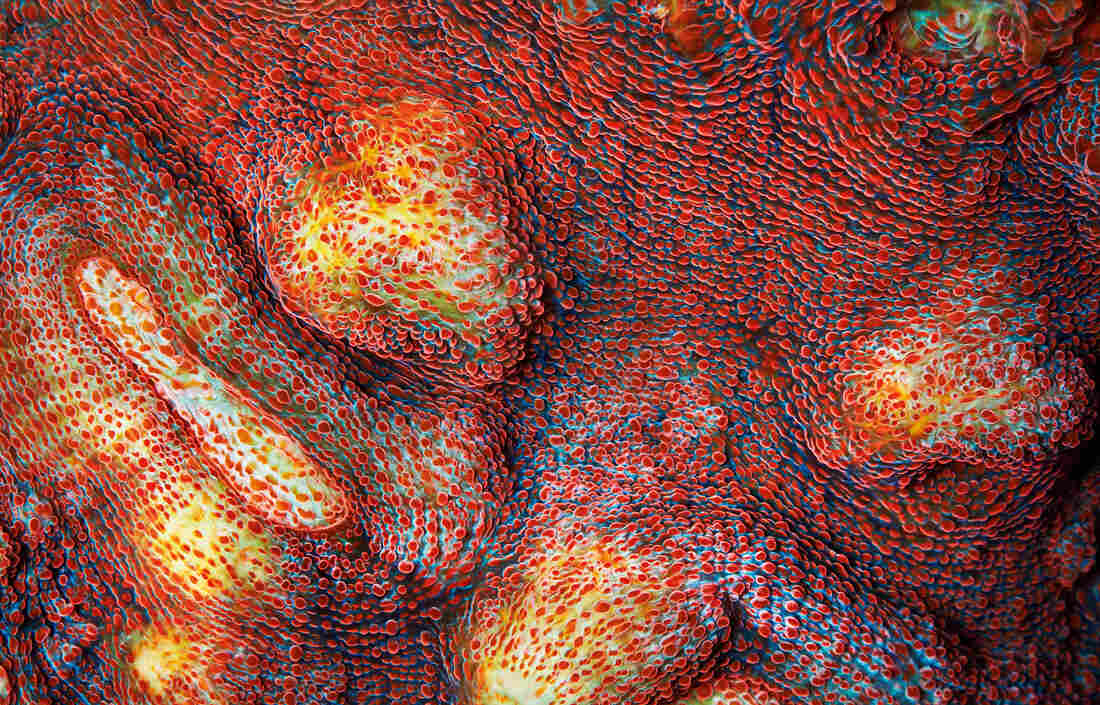 Flach discusses the importance of coral in the global ecosystem: "It accounts for such a small percentage of the ocean floor; yet I think it supports 25 percent of marine life." Tim Flach hide caption

Consider, for instance, Flach's pictures of coral. "It looks almost like blood," he says — another metaphor for these animals that create some of the most vital marine habitats on Earth. "It accounts for such a small percentage of the ocean floor; yet I think it supports 25 percent of marine life," he says. Through global warming and ocean acidification, some studies project, 90 percent of coral will be dead by 2050 — an outcome that would be devastating to the world's fisheries and the people who depend on them for food. 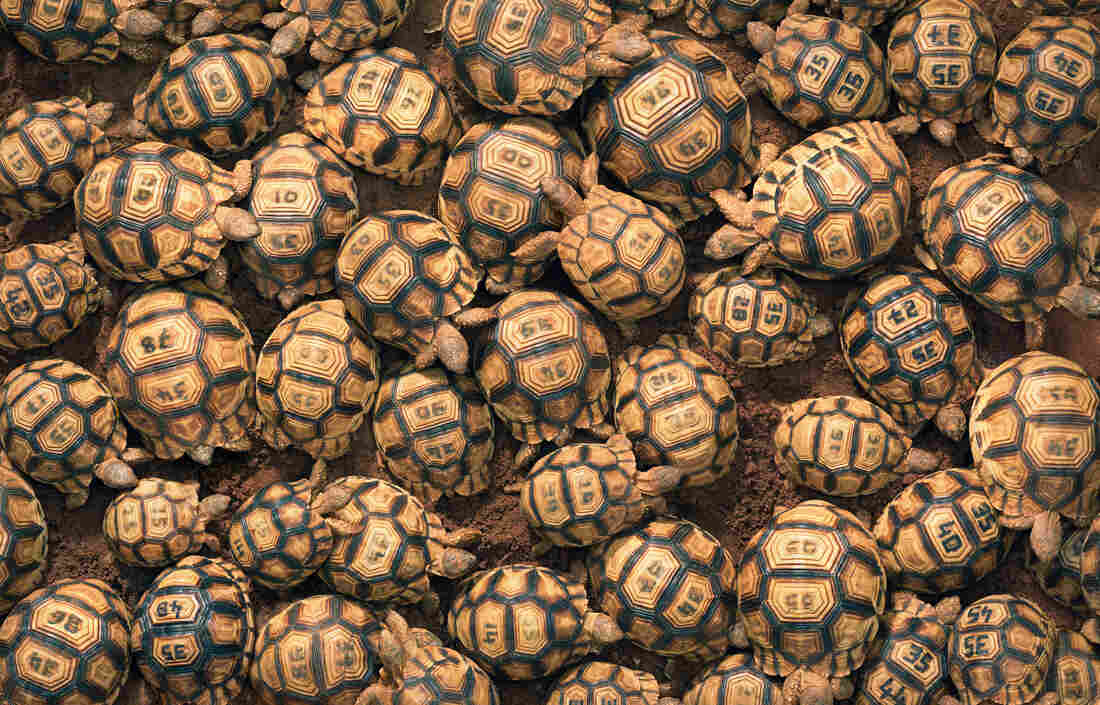 Carving an ID code on the shells of ploughshare tortoises discourages poachers from stealing them from a breeding station. Tim Flach hide caption 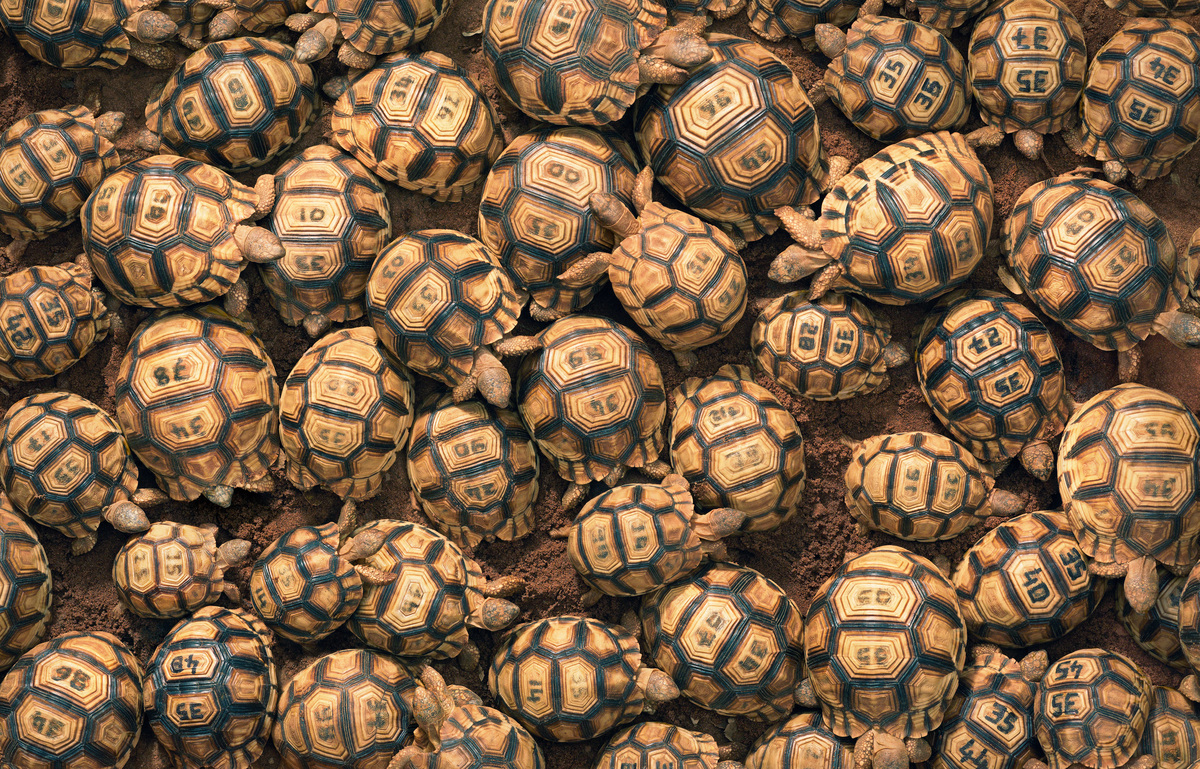 Carving an ID code on the shells of ploughshare tortoises discourages poachers from stealing them from a breeding station.

In 2016, conservation organizations warned the government of Madagascar that without adequate protection, the tortoise could vanish from the wild in as little as two years. According to the International Union for Conservation of Nature and Natural Resources, the total ploughshare tortoise population is estimated to be roughly 400. 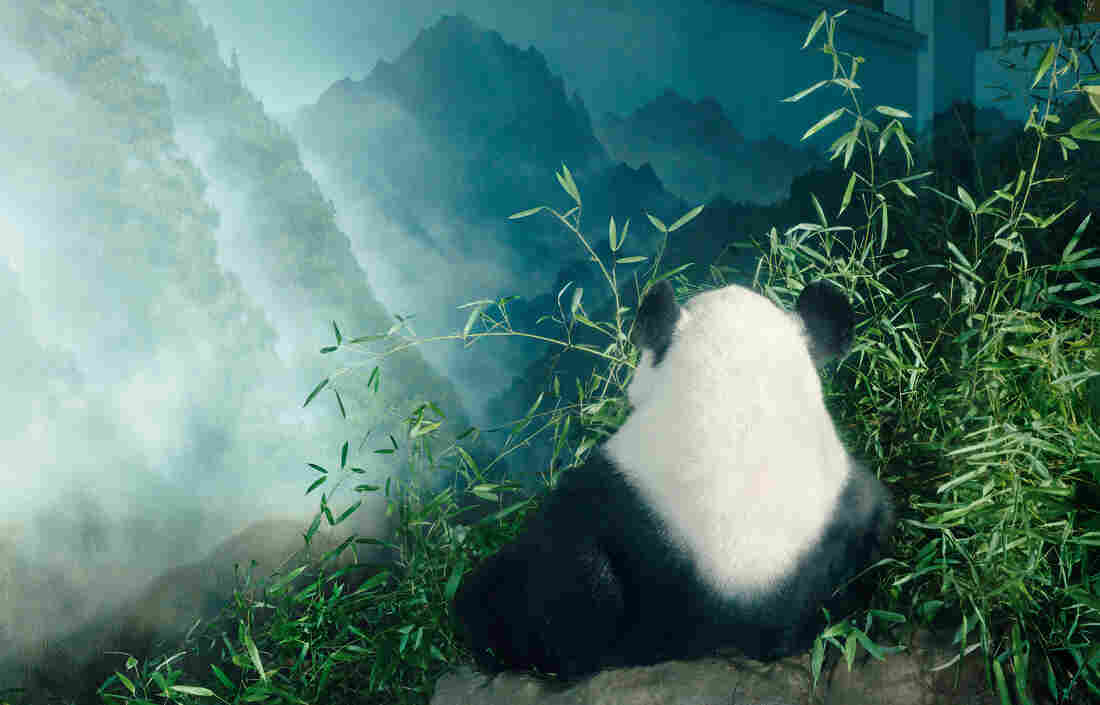 Because giant pandas are widely beloved, they have a rarefied place in conservation, leading to the unintended consequence of providing safety for less fashionable species who happen to live in the same region. Tim Flach hide caption

Overall, Flach is optimistic about the future of these animals. "I'm not trying to say I'm a tree hugger here, but we're trying to be smart going forward so we assure that things don't go to the tipping point. It's not one of doom," he says. "It's just 'let's think about how to communicate so that we are able to make that change.' "

Flach points to the giant panda or Ailuropoda melanoleuca as a particular success story. Because giant pandas are widely beloved, they have a rarefied place in conservation. Protections for pandas have preserved vast stretches of space in China. An unintended consequence of protecting the giant panda's habitat range is safety for less fashionable species who happen to live in the same region. Scientists say the panda is the umbrella species, shielding its neighbors.

"Having an ambassador animal is useful — that's absolutely true. And the government will give money but not to any other animal who isn't as glamorous," he says. Pandas have been an economic resource for China, as well. The country also generates revenue through panda tourism and renting pandas to zoos for roughly a million dollars per panda per year. 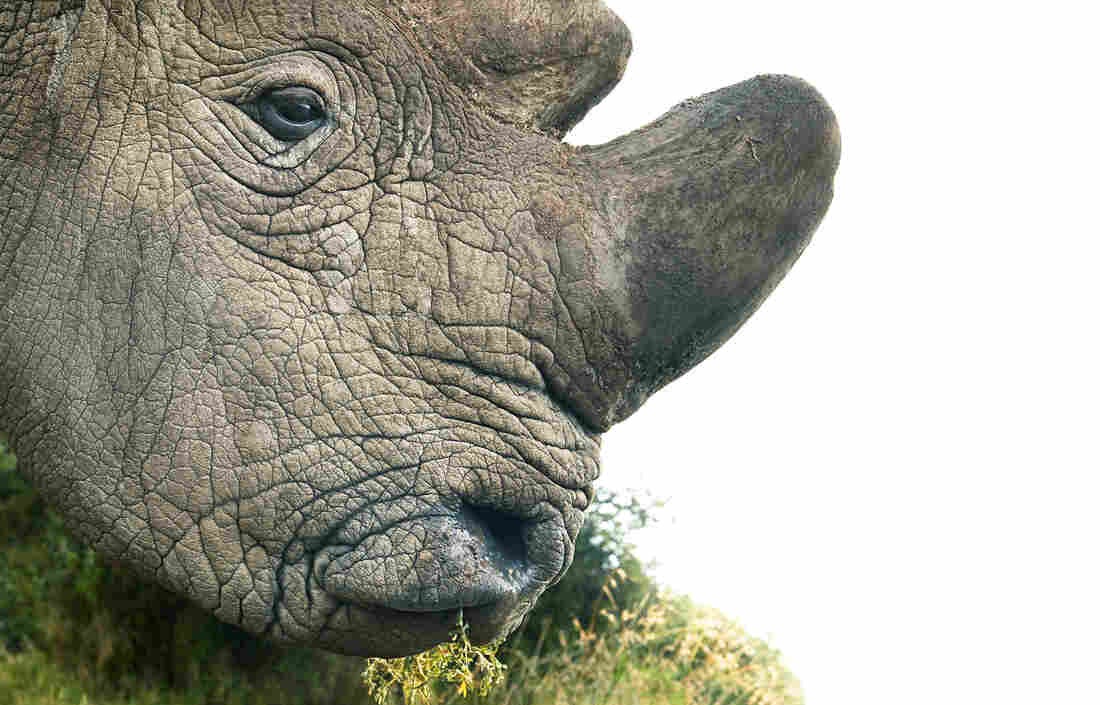 Northern white rhinos have been hunted for their horns, which are believed — without evidence — to have medicinal properties. The population is down to two females and one male. Tim Flach hide caption

If there is one species in the book that may not be able to return from the brink of extinction, it is the northern white rhinoceros or Ceratotherium simum cottoni. Flach photographed the last living northern white rhinos, a family of three in Kenya. In the past half-century, northern white rhinos were hunted for their horns, which, according to superstition, have medicinal value. But the rhino horns, which are made of solid keratin, the primary component of human hair, has not been shown to have any value as a treatment for disease. Reflecting on the animal's near-extinction, Flach says: "Why am I searching out this animal? That's a question I find troubling. Something we know is disappearing."

The loss of the rhino, Flach says, is not just about the one species. It's emblematic of a deeper problem. "Another thing [disappearing] surely is well-being. I profoundly believe in being better connected to the natural world, and not just on a spiritual aspect of who we are. We've got certain animals that turn the soil or forests that make fresh water," he says. "Our future depends on them. It's pretty basic really."